This is the heart-stopping moment a teenager saved his three-year-old sister from being hit by a car after she ran across the road without looking.

The 15-year-old boy from Rondonopolis in Brazil risked his own life by sprinting across the road to grab her out of the way just in time.

Dramatic footage of the heroic save was recorded on a shop’s security camera on December 10.

In the clip, the little girl runs out of the store and crosses the road to stand next to someone on a motorbike.

Shortly afterwards, her brother and another, older girl emerge from the shop and wait for the traffic to pass before they can retrieve the little girl.

However, after a white car passes the three-year-old thinks it is clear and makes a break for it, right out in front of another car.

She is a split second from being hit when her brother dashes in front of the oncoming car to whisk his sister to safety. 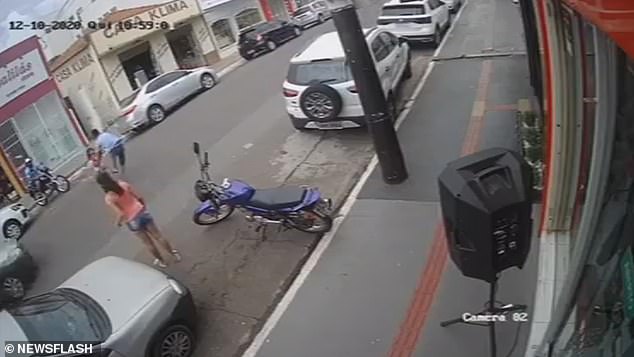 The boy was seen by the car, which immediately slammed on the brakes, escaping with a mere grazed knee in the process.

The owner of the store, Alex da Silva Marques, told local media: ‘At the time, we didn’t grasp the scale of what had happened, but when I took the cameras out, my legs went weak and my eyes filled with water because he’d saved the girl’s life.

‘It was cinematic, an heroic act. That girl was born again.’ 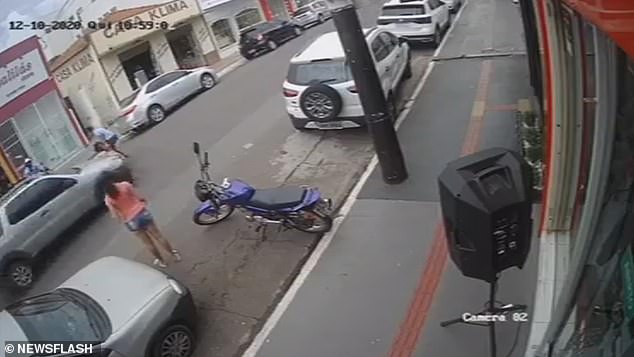 Marques told local media that the girl’s family was shopping in his store when the incident unfurled.

‘The boy and the girl decided to go to another shop. The little girl ran ahead and crossed the road without looking. A worker said that she’d gone out, and they (the family) went after her.

‘When they went out, the little girl tried to come back, and he saved her.

‘I’d never seen anything like it. As of yesterday, he’s a hero,’ he told local media the day after the incident.