The biff is back: Chaos at Suncorp Stadium as Dane Gagai and Matt Burton punch each other in the head and get sin binned in ugly clash that gave fans a flashback to the ’80s

Fans and pundits have been crying out for a full-blooded Origin comparable to the feisty rivalries of the 1980s, and Matt Burton and Dane Gagai certainly delivered on Wednesday during Queensland’s bruising 22-12 win.

After a ferocious first half which saw three player withdrawn with head injuries, tempers boiled over in the early knockings of the second half after an off-ball incident between Kalyn Ponga and Burton.

The Newcastle gun burst through New South Wales’ defensive line, before being hauled down by Adam Yeo. As he returned to his feet, Burton clattered through the back of him while play continued through Daly Cherry-Evans. 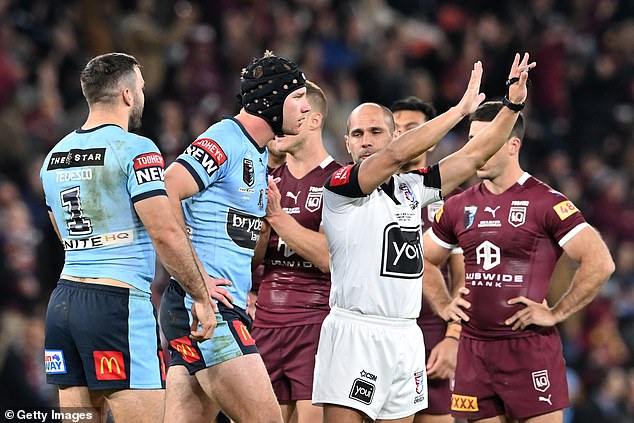 Yet Burton’s sneaky act did not escape the attention of Queensland star Gagai, who squared up to the Canterbury gun before chaos ensued.

In an astonishing sequence, both players aimed haymakers at each other, with Gagai seriously connecting with his rival’s chin with the help of lock Tino Fa’asuamaleaui, who grabbed a hold of the five-eighth while Gagai swung at him.

Burton was left bloodied after the punch on and some of that blood managed to find its way onto referee Ashley Klein’s jersey.

Klein had no option but to sin bin both men for the ugly act, the first time Origin has seen such an incident since Paul Gallen punched Nate Myles in 2013.

That incident – in which Gallen threw a big punch after growing frustrated with Myles’s ‘grubby acts’ – saw the NRL clampdown and ban fighting. 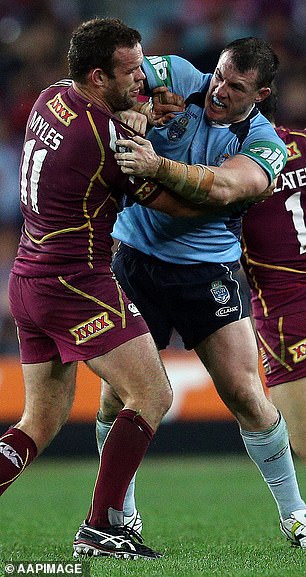 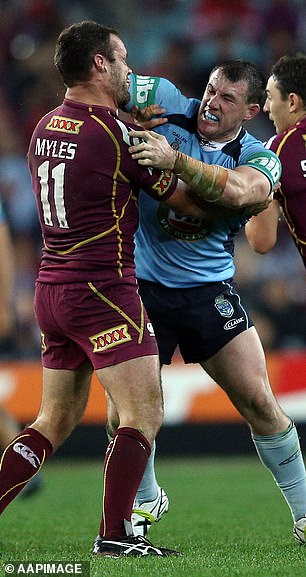 Gagai and Burton’s brawl has certainly lit a fuse in a rivalry that has long been accused of falling flat in recent years, although fan opinion was divided over the brawl itself.

‘Probably the craziest game in terms of intensity and fights the rugby world has witnessed in some time,’ one fan posted.

‘Dane Gagai blind-sides a Blues player then starts throwing punches… should get suspended for 6 months,’ a third fan said. ‘A cheap shot followed by a coward’s punch, but @NRL will do nothing.’

Other fans suggested that a a combat sports career awaits the 31-year-old.