An Australian teenager who fled to Syria at the height of Islamic State’s rampage through the Middle East claims he ‘truly knows what it feels like to lose everything’ after his home was destroyed.

Oliver Bridgeman was only 18 when he left Toowoomba, Queensland, after ditching Schoolies for a missionary trip to Indonesia in 2015. He then continued on to war-torn Syria, where he still maintains he is working as a humanitarian worker.

The Australian Government cancelled his passport over concerns he had joined a terrorist organisation known as Al-Nusra Front, which was backed by Al-Qaeda.

After several years of silence in which many assumed Bridgeman had been killed on the frontline, he resurfaced with a new bushy beard and a new name; Yusuf.

Bridgeman recently revealed his home in Syria has blown up, with fire tearing through and destroying all of his possessions.

‘Absolutely everything is completely destroyed… All my personal possessions that have been with me since I came to Syria seven years ago have been lost,’ he said.

Bridgeman has since revealed his home in Syria blew up recently, with fire tearing through and destroying all of his possessions 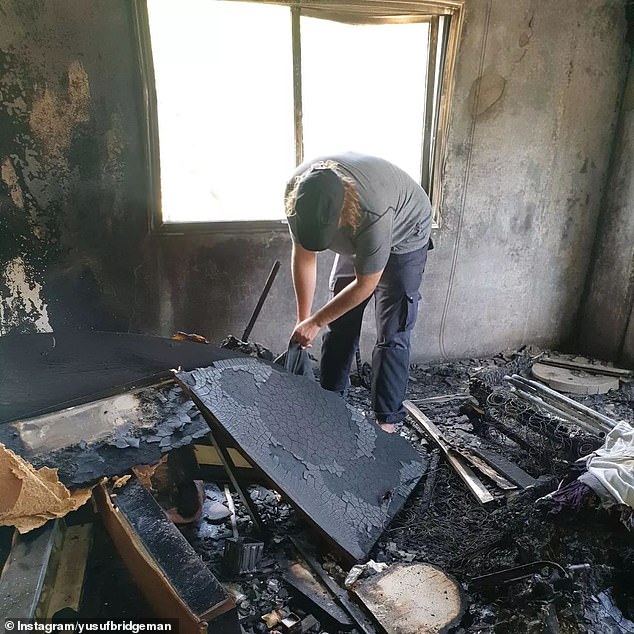 ‘Absolutely everything is completely destroyed… All my personal possessions that have been with me since I came to Syria seven years ago have been lost,’ he said 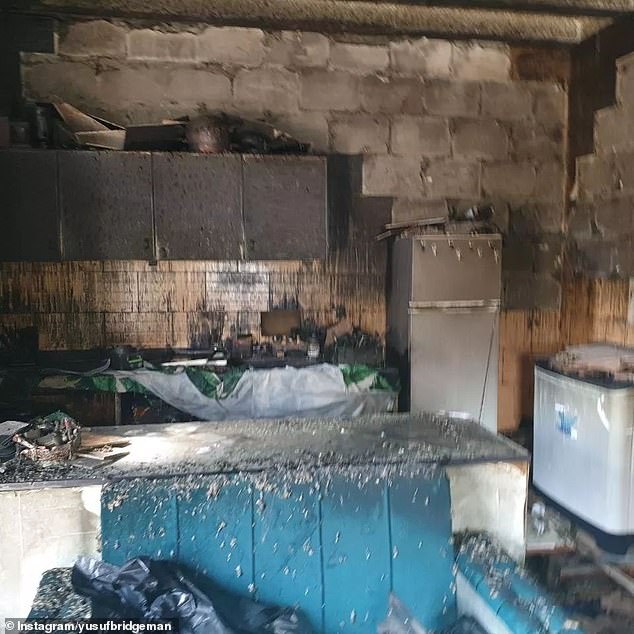 Photos show charred walls and melted furniture, with much of the home’s contents reduced to rubble

The now 25-year-old said for the first time he felt he could now relate to the Syrian citizens who had found themselves displaced and homeless during the war.

‘I have spent the last seven years of my life dedicated to helping people who have lost their homes, and now I know what it truly feels like to lose everything,’ he said.

Bridgeman said he couldn’t believe how difficult it was to ‘lose everything in only a matter of minutes’.

Photos show charred walls and melted furniture, with much of the home’s contents reduced to rubble.

Bridgeman claims he felt compelled to leave behind his comfortable life in Queensland to offer aid to the Middle East.

He insists the near miss on his life has only inspired him to ‘work even harder to help the people here’.

Bridgeman says he runs a charity in which he creates care packages for displaced women and children, and relies on public donations to keep afloat. 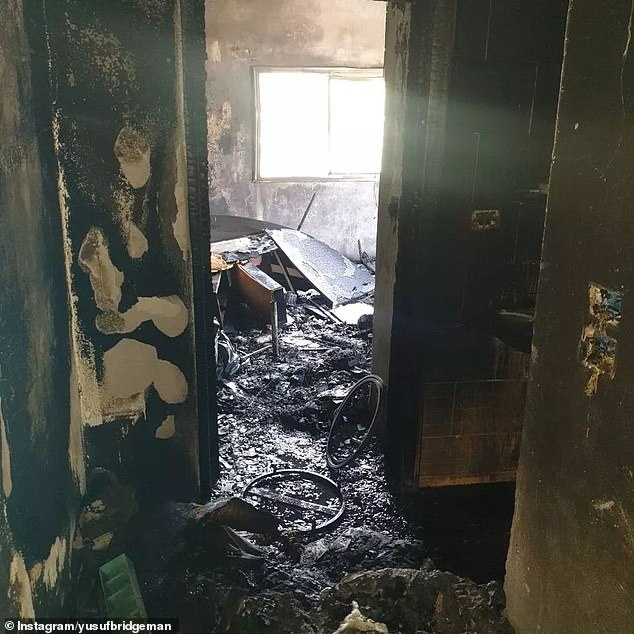 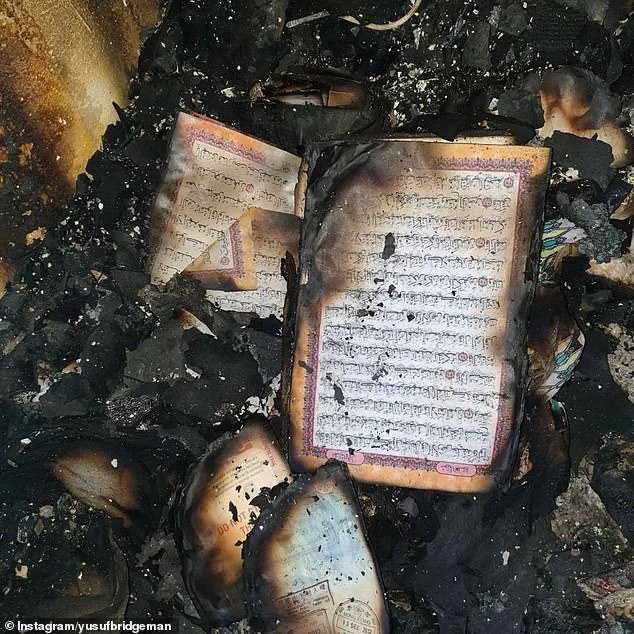 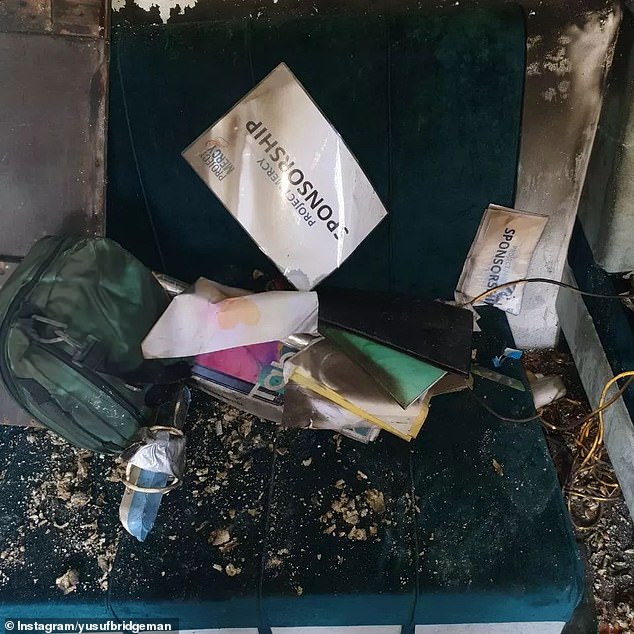 Bridgeman claims to run a charity in which he creates care packages for displaced women and children, and relies on public donations to keep afloat. He said all of the resources he’d collected over the years for the charity were also destroyed when his house blew up

He said all of the resources he’d collected over the years for the charity were also destroyed when his house blew up, and is pleading for donations to help get the organisation up and running again.

But the Australian government believes he fought in the conflict against Western troops as a foreign fighter, which is why his passport was cancelled.

He claims having his passport cancelled by the Australian government was actually a ‘blessing in disguise’.

The 25-year-old claims most of the women and children he works with are living in refugee camps after ‘losing everything… for the sake of Allah’.

‘I have witnessed and spoken with some people who have lost absolutely everything,’ he said.

‘It’s so hard to describe the pain and torment these people have gone through for the sake of Allah.’ 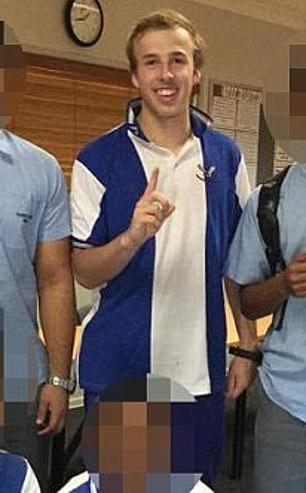 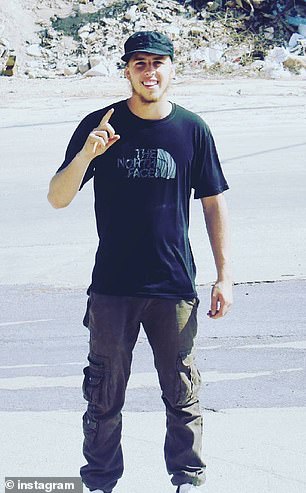 These two photos both show Bridgeman holding one finger in the air. The pose has been associated with ISIS but also reflects the Muslim ideology to believe in one God 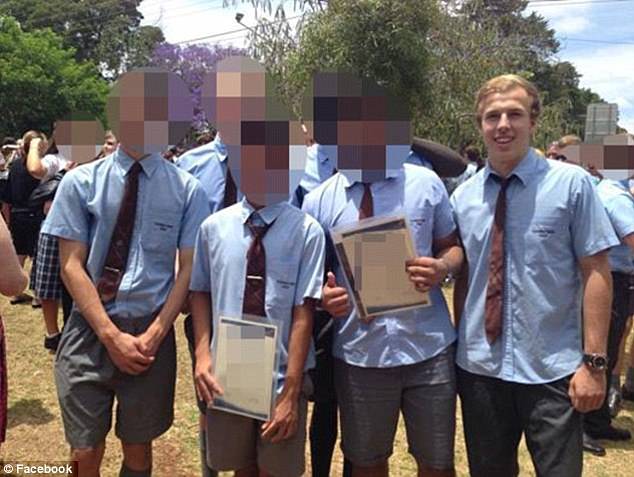 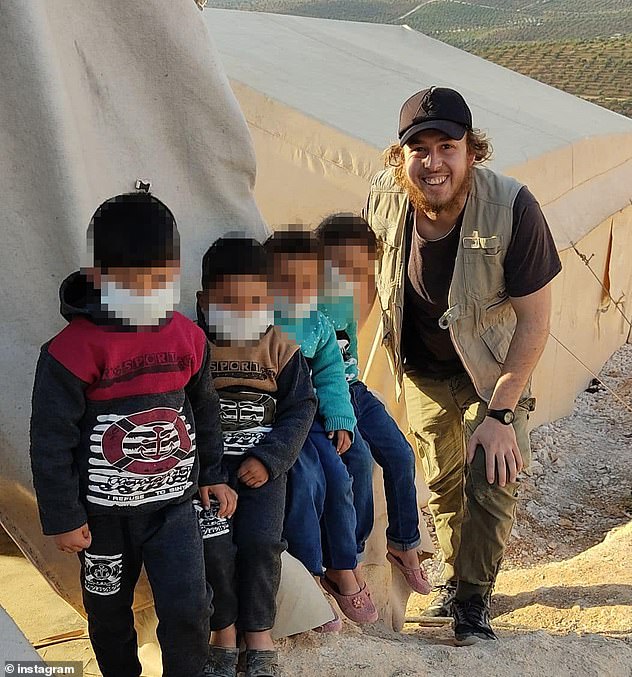 At the time of the decision to cancel Bridgeman’s passport, then-Immigration Minister Peter Dutton said Australians were warned there would be consequences for travelling to Syria.

‘People who go off into conflict zones — even if they’re well intentioned — ultimately can cause significant grief and stress for their own families,’ he said.

‘This is something people should contemplate before they go — not when they’re in the middle of a conflict zone.’

The warrant for his arrest alleged he took part in ‘incursions into foreign countries with the intention of engaging in hostile activities’.

Official advice from the Australian Government is to avoid travelling to Syria due to an ‘extremely dangerous security situation’.

Bridgeman has spoken extensively about the challenges faced in an active war zone each day. 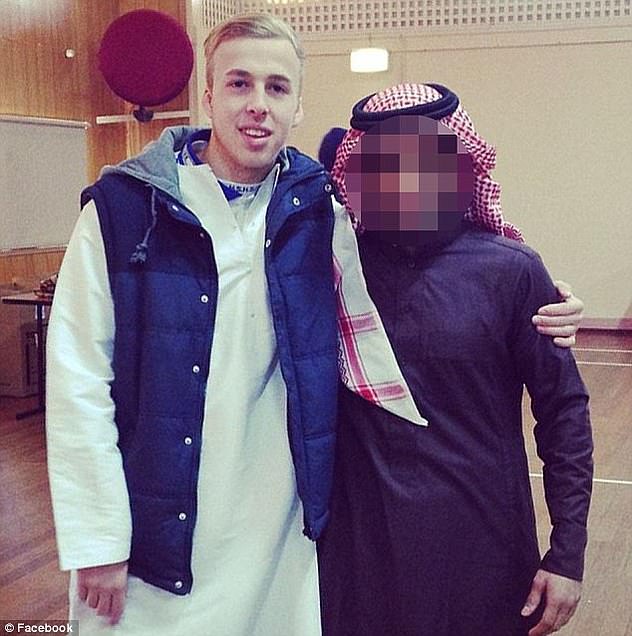 Bridgeman turned to Islam while living in Toowoomba in Queensland, but there was no indication he had been radicalised among his peers or religious leaders 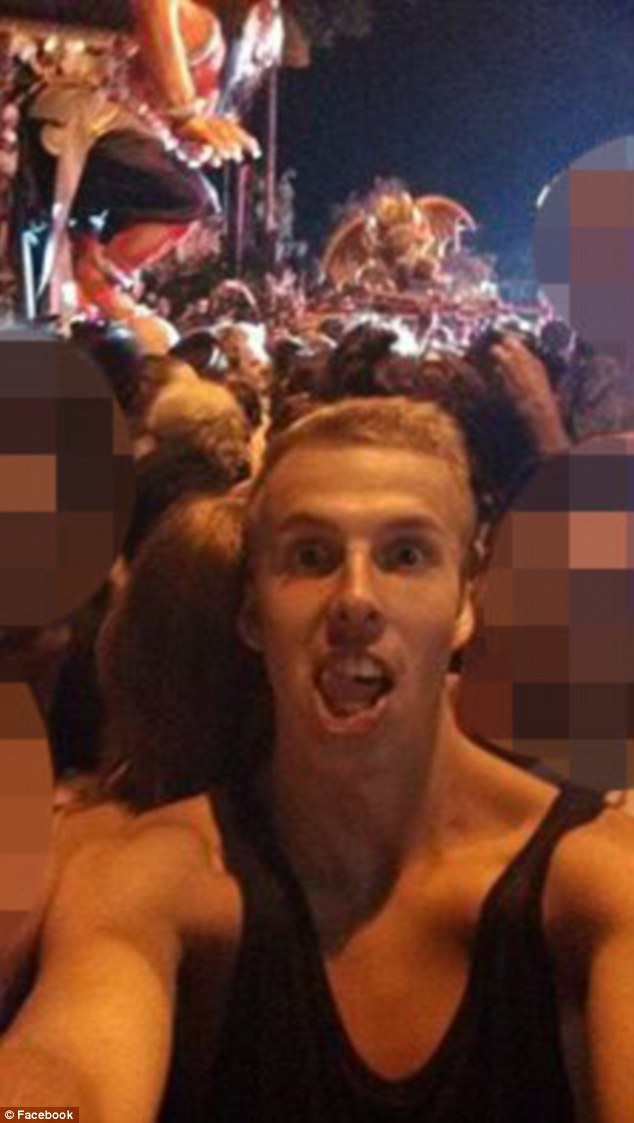 Bridgeman shared this picture taken during the Nyepi Parade – the crowning point of Balinese New Year – in March 2015, before travelling on to Syria 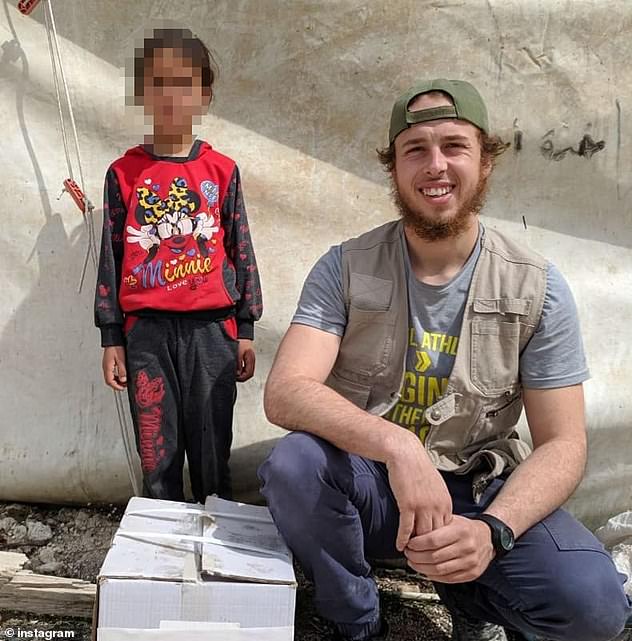 In one post, he revealed an airstrike narrowly missed him, leaving him with a minor scratch and ‘dusty cap’.

Most people he encounters are less fortunate.

He recently shared details about a young boy who spends his days gathering plastic on the streets, which he sells for 20c a kilogram to support his family, who live in a camp with him.

Bridgeman claims many of the children have spent their whole lives in refugee camps and know nothing other than war and poverty.

‘Kids who have never eaten meat or even slept on a comfy mattress. Their fathers sacrificed their own lives for this and now they are living in refugee camps living below the poverty line because the people have forgotten them.’

When he made the decision to leave Australia and head to Syria, Oliver Bridgeman told no one of his plans – not even his parents.

The then-18-year-old skipped his traditional Schoolies trip and instead went to Indonesia, where he volunteered in a Balinese refugee camp before heading directly to Syria.

His parents Andy and Kath Bridgeman contacted authorities when their son failed to return home, and were devastated when they learned the truth.

A year after Bridgeman fled, his parents said they ‘struggled to comprehend’ what would compel him to move to Syria.

Mr Bridgeman said: ‘I was freaked, panicked, shocked… [There were] uncontrollable tears. He’s my son and my friend.’

But Mr Bridgeman said he also ‘knew his son’ and was certain he hadn’t gone to Syria to fight with militant extremists, like the government assumed.

In fact, he said if he had any inkling the teen was up to no good, they would have done everything they could to help bring about justice.

‘We would’ve handed him basically on a plate to the authorities,’ Mr Bridgeman said.

‘We said to the Federal police is there anything you want us to do, we would do it. We were so open about it we couldn’t be any more open.

‘If Oliver was involved in that then the family that we are… We say he deserves everything that will come to him. We’re a very moralistic family, if he doesn’t know rights from wrong then he’s got to lay in that bed but we know he’s not doing it, we know our son’.

Instead, his family say he is ‘just a young, naïve kid who wanted to change the world’.