Boy, 12, causes chaos on the roads after stealing a car and driving over a kerb as shocked motorists pray he doesn’t crash

A young boy has gotten behind the wheel at a busy shopping centre and recklessly driven a car around a car park.

The boy, 12, drove around the parking lot before exiting onto a street in North Lakes, in Queensland’s Moreton Bay Region, on Saturday afternoon.

Dramatic footage from a witness’ phone captured the moment he drove over a kerb as shoppers watched on in horror.

A young boy, 12, has dangerously driven a car around a busy shopping centre at North Lakes in Queensland after he was left inside the vehicle

‘Oh no! He’s going to smash into the front…’ a woman was heard saying.

‘Whose car is it? He’s going to smash into lots of cars.’

One woman chased the car down as the boy entered what appeared to be a roundabout.

Queensland Police told Daily Mail Australia the car was later abandoned and the boy was spotted walking down a road close to the centre.

‘Police received a report of a young boy driving a car at North Lakes around 2.30pm yesterday,’ it said.

‘The vehicle was located abandoned in a nearby street around 10 minutes later and the 12-year-old driver located by police walking down the street.’ 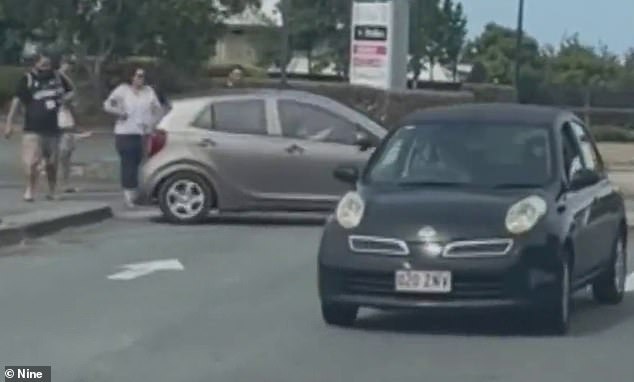 The car was abandoned in a nearby street and the boy was spotted walking down the road. No one was injured during the chaos

No one was injured and the car was not damaged.

Police said the boy had initially arrived at the shopping centre with an adult who left him in the car while they went into a shop.

‘The boy then decided to take the vehicle for a drive,’ police said.

‘Police have spoken to the boy and inquiries are ongoing.’