Queen’s show of faith as she celebrated Christmas in a private chapel after TV broadcast that drew an audience of 8.2million

By Emily Andrews Royal Editor For The Mail On Sunday

The Queen took part in a special Christmas Day service inside Windsor Castle, The Mail on Sunday can reveal.

As Supreme Governor of the Church of England, the 94-year-old’s faith is incredibly important to her, but she has been unable to attend church because of the Covid-19 pandemic.

But on Friday, a Royal chaplain delivered a sermon and readings inside her private chapel within Windsor Castle where she is self-isolating with Prince Philip.

The Queen took part in a special Christmas Day service inside Windsor Castle, The Mail on Sunday can reveal

While the Berkshire castle is in tier 4, the Government has allowed places of worship to open as long as social distancing precautions are observed.

The chapel holds a special place in Royal history.

The Queen herself, Prince Charles and Princess Anne were confirmed there while the setting was used for the christenings of Prince Edward, Zara Phillips and Prince Harry’s son Archie.

A Royal source said: ‘Christmas Day is obviously one of the most important days in the Christian calendar so everything was done to create a Covid-19 secure service for her.’

Due to lockdown and concern that she might draw crowds, the Queen has gone to church only once in the past nine months – to attend the wedding of her granddaughter Princess Beatrice to Edoardo Mapelli Mozzi at the Royal Chapel of All Saints in Windsor Great Park.

She has, however, found novel ways to continue her worship.

While at Balmoral in the Scottish Highlands in August, services were performed outside, and since September she has attended virtual services each Sunday live-streamed by Canon Martin Poll, chaplain to the Windsor Great Park, for the community of the Royal Chapel of All Saints. 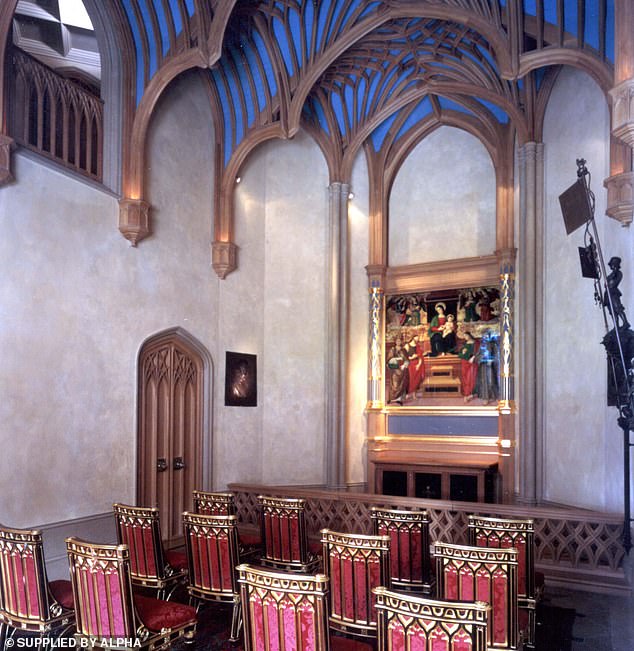 While the Berkshire castle is in tier 4, the Government has allowed places of worship (pictured) to open as long as social distancing precautions are observed

A socially distanced carol service, during which Princess Beatrice read a lesson, was also held last weekend and beamed back to the Queen at Windsor Castle.

The Queen emphasised her faith during her speech to the nation on Christmas Day, which drew a TV audience of 8.2 million.

As well as praising the ‘quiet, indomitable spirit’ of people around the world facing the challenge of coronavirus, she said: ‘The teachings of Christ have served as my inner light, as has the sense of purpose we find in coming together in worship.’

Her address to the nation was the most-watched TV broadcast of Christmas Day, beating the BBC’s Call The Midwife into second place by almost three million viewers.

The private chapel where the Queen spent Christmas Day morning has a distinctive blue vaulted ceiling with white walls.

It was rebuilt after the fire at the castle in 1992 and features six stained glass windows designed by the Duke of Edinburgh.

The original chapel dates back to Queen Victoria, whose daughter Princess Helena married there while several of the Monarch’s other children were confirmed and christened in the historic setting.