Marketing manager, 25, reveals her simple shopping trick to save money every time – and her secret lies in one specific supermarket aisle

A marketing manager has offered her simple grocery tip for buying a popular pantry staple at the supermarket for a fraction of the price.

Queenie Tan, from Sydney, shared a TikTok video explaining how curry powders are always cheaper in the international food aisle than the big-branded versions.

Shoppers can expect to find a wider variety of bulk spices in the international food aisles at major supermarkets at reasonable prices. 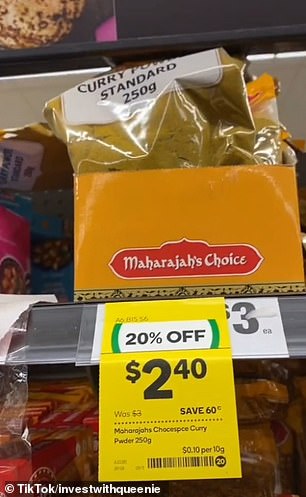 Queenie Tan, from Sydney, has offered her simple grocery tip for buying a popular pantry staple at the supermarket for a fraction of the price. The 25-year-old spotted a 250g bag of curry powder in the Indian section at Woolworths for just $2.40

‘Spices can be different prices in the supermarket, depending on which aisle you shop in,’ she explained.

‘For example, this curry powder in the Indian section is 3.5 times cheaper than in the spices aisle. Even without the special, it would be three times cheaper.’

Queenie said shoppers can reduce the cost of their grocery bill just by checking out the international food aisles at their supermarket or local international grocers.

Her video has since been viewed more than 110,000 times, with many agreeing they have saved so much more money just by shopping in the international aisles or at an Asian grocery store.

‘The spices tend to taste a lot better than those from the “normal” spices aisle,’ one wrote, while another said: ‘Don’t buy spices at the supermarket, they will always be cheaper at an Asian grocer.’ 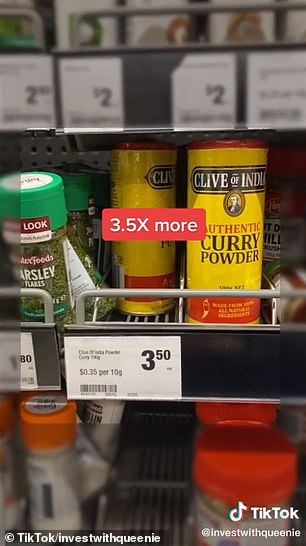 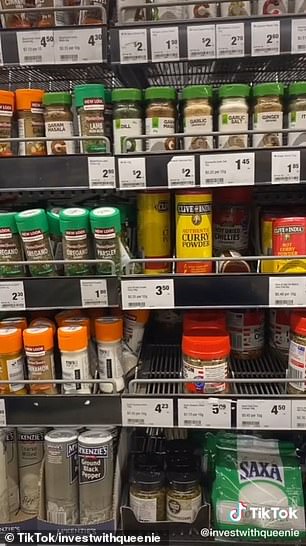 While in the spices aisle, she found a 100g variety costing $3.50 – which is three times more than the version from the international food aisle

Some shared other grocery items you can get cheaper elsewhere.

‘Same goes for nuts and dried fruits. Always go to the baking aisle rather than the snack aisle or produce area,’ one wrote.

Another said: ‘Sam for meat. Don’t go to the supermarket or a fancy butcher. Go to your local less fancy butcher, it’s always cheaper.’

While one added: ‘Oh yes, and fresh herbs are like $4 in Coles and Woolworths but you can get them for as low as 80 cents in an Asian supermarket.’

One chef previously shared her grocery tip on social media after she noticed the huge price difference when buying spices for her cooking.

‘As for the international aisle, years went by until I paid attention to the variety of spices. I was catering an event with certain ethnic foods. It was then that I realised the variety and savings. Now I will always look there first for needed items.