The Queen will miss this year’s Chelsea Flower Show for the first time since 2005 after the date was changed because of the Covid pandemic.

For the first time in its 109-year history, the event will take place in the autumn rather than May and since Her Majesty’s Coronation 68 years ago, it will be only the tenth time she’s missed it.

The monarch, who last missed the event in 2005 while carrying out engagements in Canada with the late The Duke of Edinburgh, is currently on her annual summer getaway to Balmoral, and is not expected to leave Scotland until October.

Instead, the Earl and Countess of Wessex, Princess Anne, the Duke and Duchess of Gloucester, Prince and Princess Michael of Kent, and Princess Alexandra will represent to Royal Family at the event.

The Queen will miss this year’s Chelsea Flower Show for the first time since 2005 after the date was changed because of the Covid pandemic. She is pictured at the event in 2019

Established in 1913, the flower show has become one of the world’s biggest showcases for horticultural excellence, attracting visitors and exhibitors from across the globe.

It has grown from 244 exhibitors in 1913 to more than 500 today, including gardens, nurseries, floristry, educational displays and trade stands. The show attracts 168,000 visitors.

The show is organised by the Royal Horticultural Society, of which the Queen is patron, and traditionally takes place mid-May.

However this year it was blighted by Covid, and The Royal Horticultural Society announced in January that the show, in the grounds of the Royal Hospital Chelsea, would be moved from May 18-23 to September 21-26. 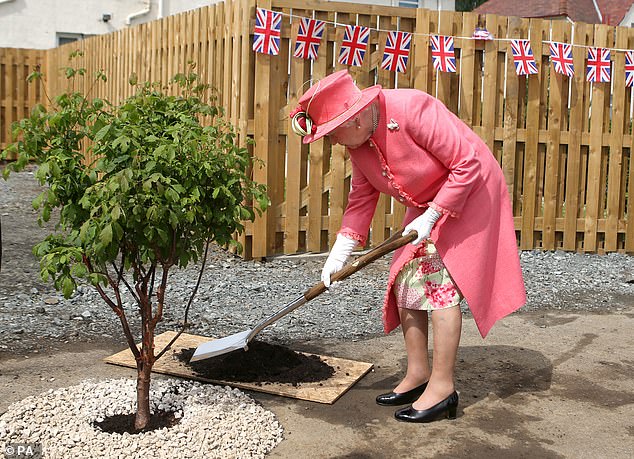 The RHS said the September show will ‘celebrate the best of autumn horticulture’ and at this year’s event, the Royal Family contingent will see displays including the RHS Queen’s Green Canopy Garden. Her Majesty is pictured planting a tree during a visit to Salvesen Gardens

Last year the event had to be scrapped completely because of coronavirus, with a virtual show staged online.

As many as 140,000 are expected to attend  the event, which will ensure planned safety measures, included spreading the show over an extra day and reducing visitor numbers.

In 2019, the Duchess of Cambridge designed one of the gardens and gave the Queen a guided tour.

The RHS said the September show will ‘celebrate the best of autumn horticulture’ and at this year’s event, the Royal Family contingent will see displays including the RHS Queen’s Green Canopy Garden. 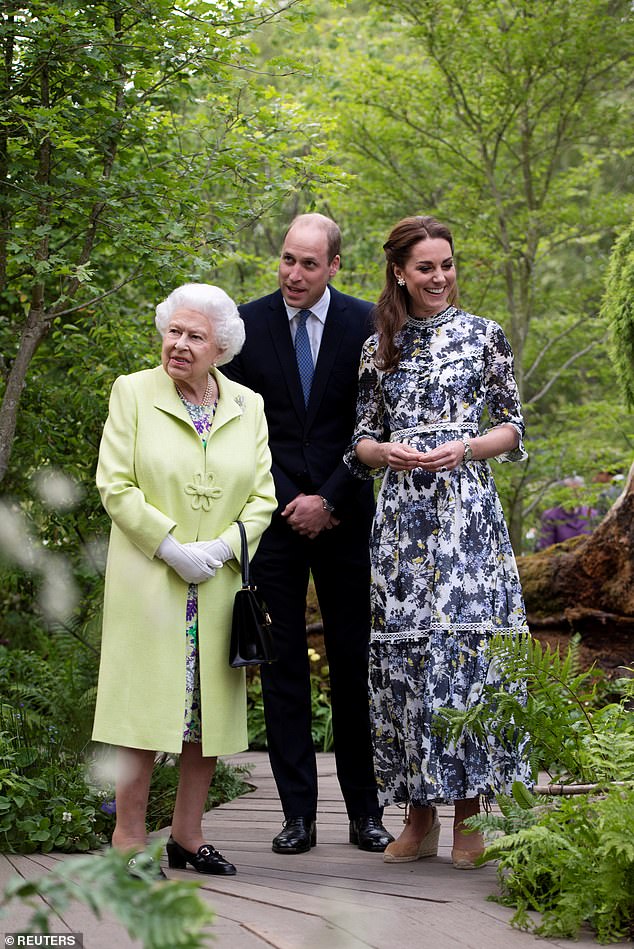 In 2019, the Duchess of Cambridge designed one of the gardens and gave the Queen a guided tour. Her Majesty is pictured being shown around the ‘Back to Nature’ garden by Prince William and Kate

The garden runs alongside Her Majesty’s unique tree planting initiative created to mark the monarch’s Platinum Jubilee in 2022.

The effort got underway in secret in March – the end of the official planting season – when the monarch and the Prince of Wales, who is patron of the initiative, met at Windsor Castle to plant an inaugural ‘Verdun Oak’ .

Everyone from individuals to Scout and Girlguiding groups, villages, cities, counties, schools and companies, will be encouraged to plant trees from October 2021, when the tree planting season begins, through to the end of the Jubilee year in 2022.

From October, details of contributions can be uploaded onto an interactive map on the new QGC website, so people can see the canopy’s development.

The Woodland Trust, the largest woodland conservation charity in the United Kingdom, has committed three million free saplings to schools and communities across the UK as part of the QGC initiative.

Trees can be planted either singularly or in copses by individuals, schools, community groups or businesses on private land, or even as a new Platinum Jubilee Avenue of medium-sized or large trees – ideal for cities, large estates, housing developments and parishes.

The project is not-for-profit and is being funded by private donors and supporters including Royal Mail, Coutts, The John Lewis Partnership, Coupa and Rentokil Initial plc.

While the QGC has not received government funding, it is also being supported by DEFRA.