Queen to meet Biden next Sunday: Monarch will host US President and First Lady at Windsor Castle on June 13 after his stay in Cornwall for G7 summit

The Queen will meet US President Joe Biden and his wife Jill on June 13, Buckingham Palace has announced.

In a statement released this afternoon, it was confirmed that Her Majesty will host the president and First Lady at Windsor Castle later this month.

He will be the 13th American president the Queen has met since ascending to the throne in 1953.

President Biden’s meeting with the Queen comes just months after he was sworn-in – a stark contrast to his predecessor Donald Trump who didn’t meet her for two years.

Trump eventually visited in July 2018 – with his now-infamous meeting with the Queen seeing him break royal protocol on several occasions.

He was branded ‘disrespectful’ after he was late for the meeting with the monarch forced to wait between 12 and 15 minutes in 80F heat.

When he eventually did arrive, he and wife Melania shook hands with the Queen instead of bowing or curtseying.

And in the worst faux pas of all, Trump turned his back on the Queen and marched ahead of her as they inspected the guard of honour.

At one point, the Queen had to ask him to move to the left, only for Trump to ignore the signal and come to an abrupt stop in front of her.

Buckingham Palace has announced the Queen will meet US President Joe Biden and First Lady Jill Biden at Windsor Castle on Sunday, June 13 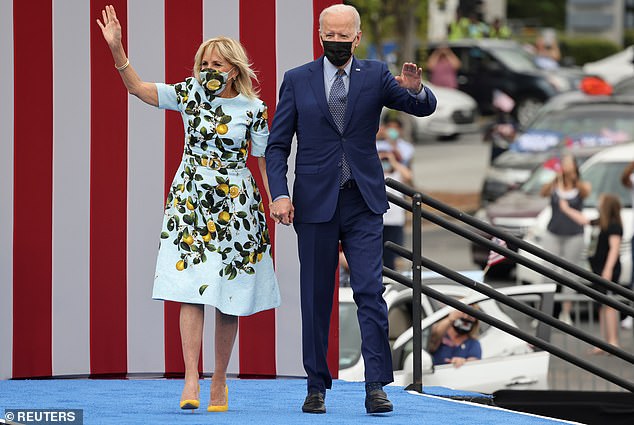 The trip to Britain is Mr Biden’s first foreign visit since being sworn-in as president in January.

In June 2019, she invited Trump to the UK again for a more formal visit, with a State Banquet at Buckingham Palace.

The Bidens are also known friends of Prince Harry, with the Duke first photographed with first lady Jill Biden in 2012.

Since then, both the president and first lady have become supporters of the Duke of Sussex’s Invictus Games initiative, a competition for wounded servicemen.

In 2014, Mr Biden joked about how much time Jill and Prince Harry were spending together during an Invictus Games trip.

‘I’m a little worried here, you know what I mean?’ the then-vice president said.