Queen Rania of Jordan stunned in a pleated purple gown as her and King Abdullah II hosted a state dinner for King Carl XVI and Queen Silvia of Sweden last night.

The Jordanian monarch, 52, was the picture of elegance in her £6,120 Andrew Gn floor-length dress, complete with sheer, billowing sleeves.

The mother-of-four opted for a brown smokey eye look and styled her hair in a half up-do to show off her matching purple heart-shaped earrings.

Adding a touch of glitz to her high-necked chiffon gown, the Queen wore a thick black belt featuring a green floral brooch for the event at the Al Husseiniya Palace.

Finishing off her evening ensemble, Rania was pictured carrying a black pleated leather clutch bag as she spoke with Queen Silvia ahead of their dinner. 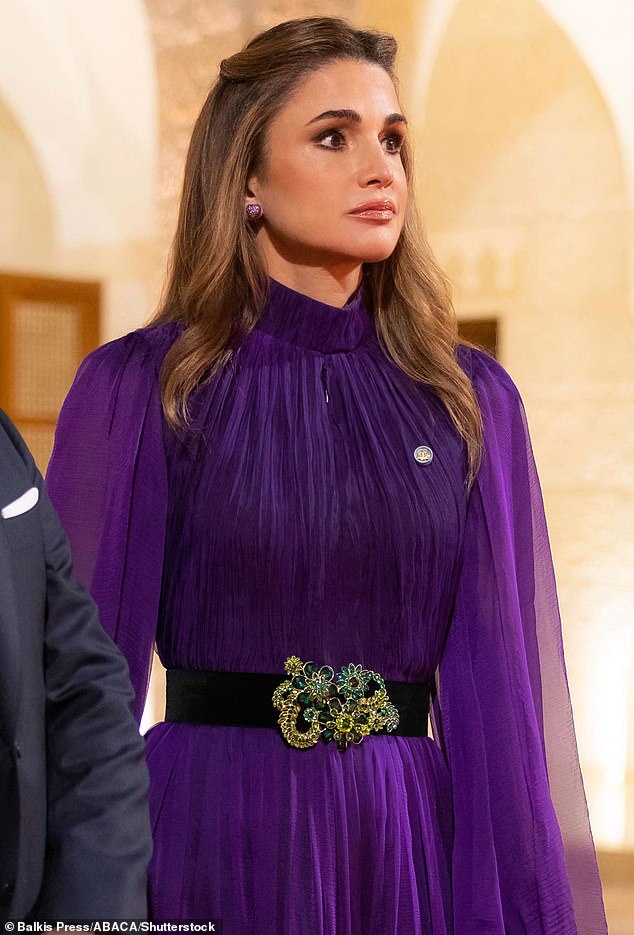 Queen Rania, 52, opted for a brown smokey eye look and styled her hair in a half up-do to show off her purple earrings which matched her £6,200 Andrew Gn floor-length dress 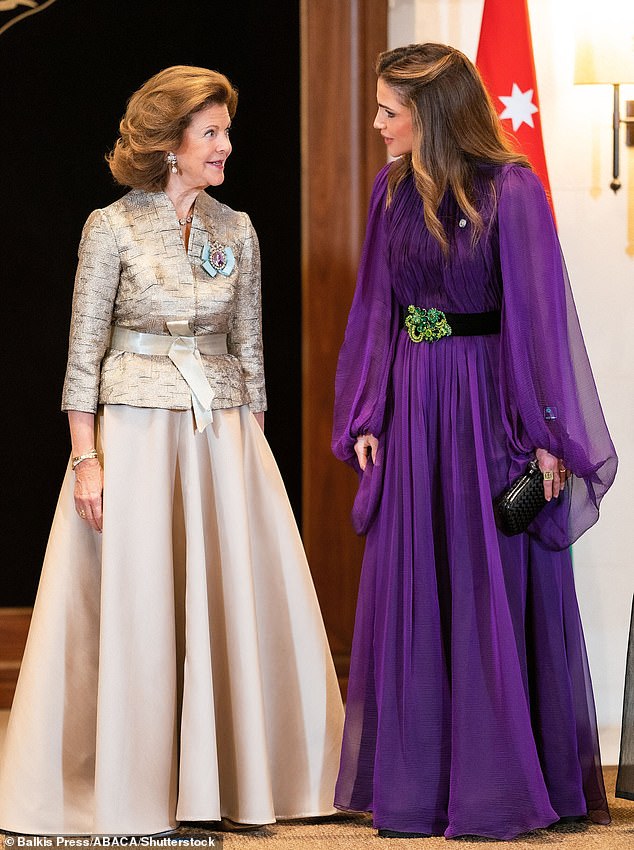 Finishing off her evening ensemble, Rania was pictured carrying a black pleated leather clutch bag as she spoke with Queen Silvia ahead of their dinner 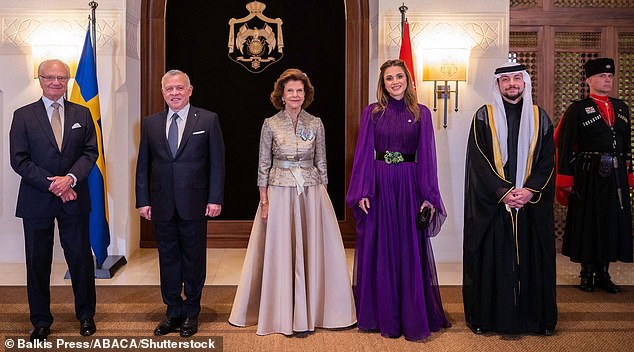 The Queen of Sweden, 78, looked sophisticated in a gold jacket with her Cameo Coronet brooch proudly on display.

Offsetting her A-line silk dress, Silvia completed her look with a matching ribbon which cinched her in at the waist.

Earlier in the day, Queen Rania and King Abdullah II held an official welcome ceremony for Queen Silvia and King Carl XVI at the Royal Palace in Amman. 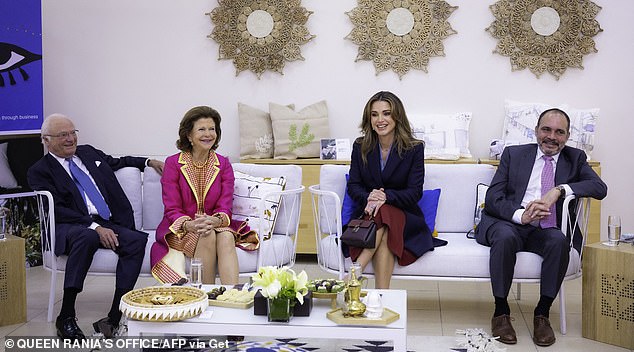 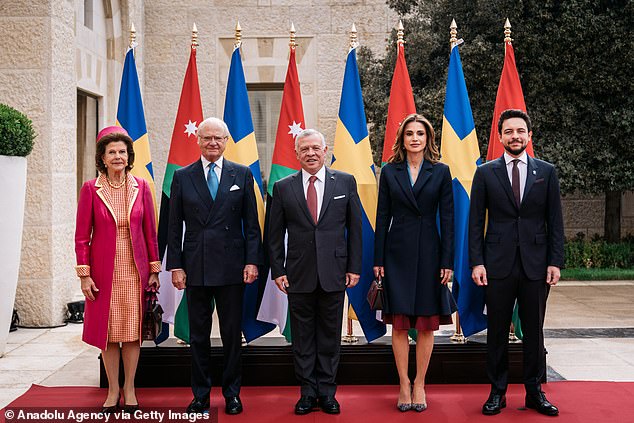 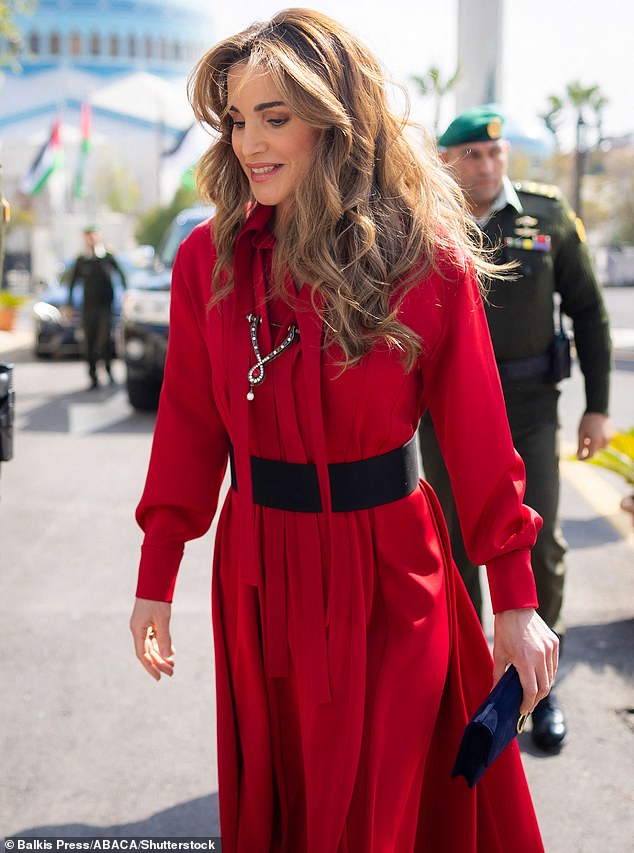 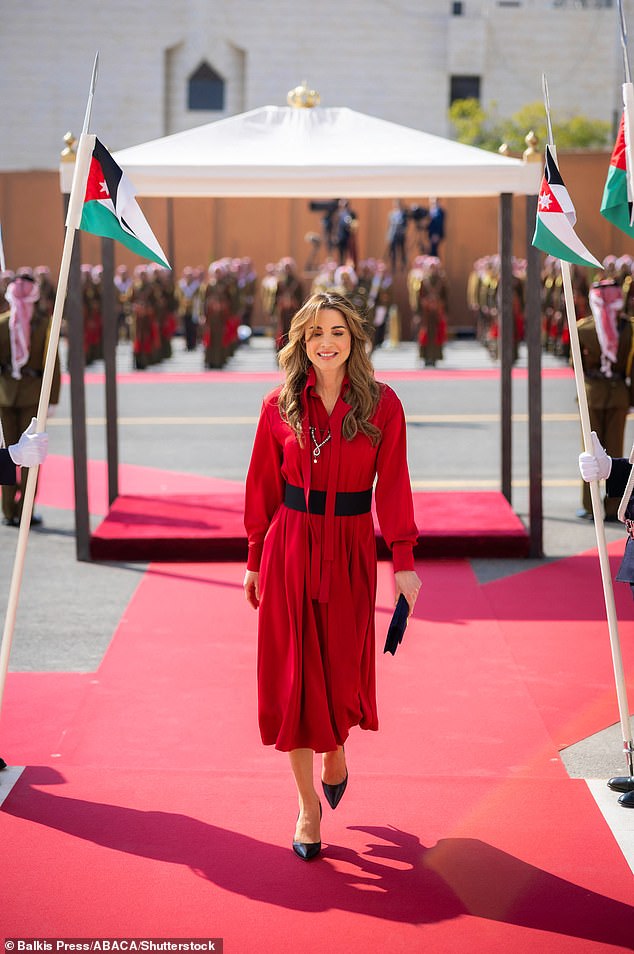 Queen Rania paired red and black in a striking combination, compromised of two colors that make up the flag of Jordan

Earlier this week, the Jordanian Queen looked effortlessly glamorous as she visited parliament to hear her husband deliver a keynote speech.

The mother-of-four was pictured arriving at the government in red maxi dress by Beirut designer Hussein Bazaza.

Along with her voluminous blow-dry, Rania styled her outfit with a bespoke clutch by British designer Jennifer Chamandi.

The now united front follows internal turmoil within the upper ranks of the Jordanian royal family, where claims of security breaches have forced King Abdullah to address the nation in assurances the security of the country was his prority.

Middle East coverage explains that King Abdullah II had addressed the nation on following allegations against his half-brother.

The King wanted to present a unified front amid strife following the arrest of 16 people, including members of the royal family.

The King’s brother Prince Hamzah, who was crown prince, was not arrested but the military asked him to ‘stop movements and activities that are employed to target the security of Jordan and its stability’.