TV’s ‘Queen of Clean’ Lynsey Crombie can command fees worth tens of thousands of pounds by mentioning plug hole unblockers and other cleaning products on social media.

But Lynsey, 43, who shot to fame on Channel 4’s Obsessive Compulsive Cleaners in 2013, is so grateful for the money, she tells Donna Ferguson that she will clean the houses of terminally-ill and elderly people for free as a way of giving back.

She and her second husband Rob, 43, live in Peterborough with their son Jake, 14, and her twins Molly and Olivia, 19.

That old-fashioned rule: if you don’t have the money, don’t buy it. My mum never worked – she didn’t need to. My dad brought in enough money as a gas service engineer to allow her to bring up me and my brother. We were a typical middle class family – we lived in a detached house, we had a car and a holiday abroad every year. I went to a normal state school and we didn’t have flash things, but I never went without anything.

My dad had an amazing work ethic. He used to work every hour God sent. He taught me that if I wanted a treat, I had to work for it. It wasn’t going to land in my lap.

Yes. The worst time was when I was left as a single parent at 24 years old, in the mid-2000s. I had just had premature twins. They were newborn babies in hospital, extremely poorly. I had no income, no job, no savings and I had to leave my husband for reasons I don’t want to talk about. [Lynsey discovered her first husband was a sex offender.] It’s all been reported on and I don’t like to dwell on the past. I’m all about being positive these days.

I took with me from the marriage only what I could fit in my car boot. I let my husband have everything because I just wanted to get away. But as I’d had a house with him and there was some money in the marriage, I was turned down when I applied for benefits.

My dad was very kind, he rented me a small flat close to their home. After a few months, I set up a speed dating business to support myself. I used to live on £20 a week after my bills. I look back now and am not sure how I coped.

I got really skinny. I’m 5ft 10ins and I dropped to eight stone. I used to live on fig rolls and cups of tea. At the end of the month, I’d pay by cheque at the supermarket because it took five days to clear. Luckily, my daughters were on prescription milk so I didn’t have to buy them any food.

How did you become the Queen of Clean?

I had set up a small publishing company with a friend, printing local magazines. We’d sell advertising space and put them through people’s doors. I was earning around £20,000 a year.

One day, we got a call from Channel 4. They were looking for hoarders for a new TV show they were doing on obsessive compulsive cleaners and wanted to advertise in our magazines.

I remember speaking to the guy on the phone and saying, ‘I love cleaning.’ Before I knew it, the main producer had called me back. He asked me if I wanted to come on the show. So I did. They sent us into really dirty houses and large country mansions and we’d have to clean them. It was a real laugh.

I genuinely like cleaning. I think it’s good exercise. I did four series and it was so much fun. I look back and think: 2013 was the luckiest year of my life. If my business partner had picked up the phone instead of me, she would have just taken the booking and all this would never have happened to me.

So I pinch myself every day that I get to do the job I do.

Yes, from posting on Instagram where my handle is @lynsey_queenofclean. For the first couple of years, I would make about £30,000 a year from it. Then about three years ago, a lovely lady – who is now my manager – said I wasn’t charging enough for my sponsored posts.

She got me my first campaign with a plug hole unblocker. All I had to do was share a picture of me holding the product. One of the kids took the photo. I got £6,000. I have nearly 300,000 followers now and can earn bigger fees.

The most lucrative was a contract with a cleaning brand. I mentioned their products on my feed at least once a week for three months, and they paid me £75,000. I’m very grateful for what I earn but I don’t take it for granted and I’ll clean the houses of terminally-ill and elderly people in my local community for free, as a way of giving back.

It was 2021. As well as Instagram, I also earn money from my three books, from writing for magazines, from radio and TV, including my regular appearances on This Morning, and from my book club. Overall, I made a good six-figure sum. If someone had told me ten years ago that I would be earning what I do now, I wouldn’t have believed them in a million years.

What is the most expensive thing you have bought for fun?

A Gucci handbag – something I never thought I’d ever own. It cost about £1,700 and I use it every day.

I remember being in the queue at Selfridges and feeling guilty about the purchase. I know that the bubble could burst at any moment. But my husband encouraged me to treat myself. 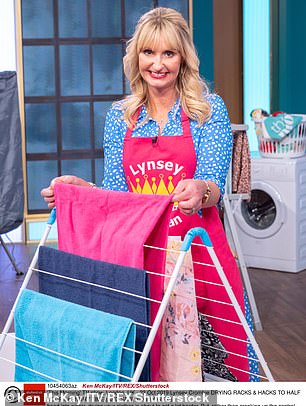 Cleaning up: Lynsey on ITV’s This Morning

Answering that phone call from Channel 4 in 2013. It changed my life.

A weekly blow dry, which costs £35. It sounds frivolous, but I can afford it. I also have a regular massage for £45 and get my nails done for £30 every other week.

I do. I started putting lump sums into a low risk scheme about four years ago, when my accountant suggested I should. I don’t invest in the stock market outside my pension.

Yes, a five-bedroom detached house in Peterborough, with a small mortgage. I bought it five years ago. We’ve put a massive extension on the back and doubled its value. I clean my home myself and it is very, very clean.

If you were Chancellor, what is the first thing you would do?

I would fund more training for cleaners, increase the salaries of cleaners working in the public sector and raise the national minimum wage so that the lowest-paid earn more.

We talk about how fabulous doctors and nurses were during the pandemic – but what about cleaners who were working to keep conditions sterile? The work many cleaners do is outstanding. If we paid cleaners more, and gave them training and accreditation, maybe they would be more respected.

Yes, I donate to food banks and Bliss, a charity that looks after families with premature children.

To be sensible with my money and mindful that my career could end tomorrow.