Queen Letizia joined her husband King Felipe VI for the couple’s first outing since the announcement of the death of his uncle King Constantine of Greece on January 10, aged 82.

The couple are set to attend the Greek royal’s funeral on January 16 at the Orthodox Metropolitan Cathedral of Athens.

Letizia looked typically stylish in her oversized white coat, wrapped at the waist with a thick belt, as she and Felipe toured a hospital museum and a basilica with Spanish officials.

King Felipe i and Queen Letizia of Spain, 50, visited Isla del Rey in Menorca this morning, in their first joined engagement since the death of his uncle, King Constantine of Greece

She wore it over a black and white dress with a tiered floral design from Mango and a pair of knee-high leather black boots.

For today’s outing, which saw the couple tour a hospital and a basilica, the Queen wore her brown locks in an elegant and wind-proof updo.

She donned a glamourous day makeup with just the right amount of blush to add definition to her cheeks. 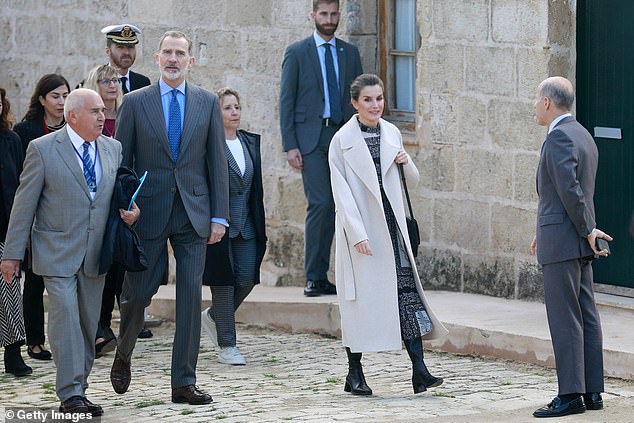 For the outing, Letizia opted for a white oversized coat, which she wore over a floral black and white number with black leather boots 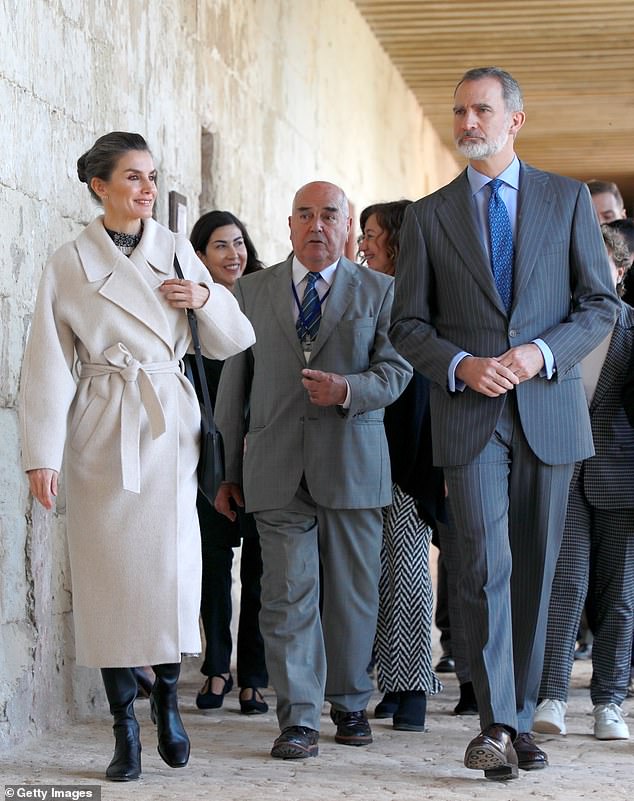 The couple toured a hospital and a basilica during their visit. Felipe looked dapper in a grey pinstriped suit

She opted for an orange eyeshadow that brought out the colour of her blue yes, and her regulation eyeliner and mascara.

The mother-of-two sported a nude glossy lip to keep the look natural  and efortlessly chic.

Meanwhile, King Felipe VI looked dapper in a grey pinstriped suit and a light blue shirt with a blue tiw.

It is the first time the couple were seen since the death of King Constantine of Greece, Felipe’s uncle and the brother of his mother, Queen Sofia. 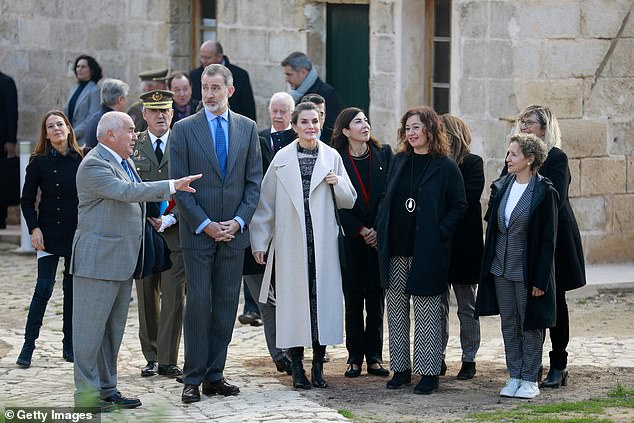 The royal couple were accompanied by the Spanish Secretary of State for Tourism Rosana Morillo, President of the Balearic Islands Francina Armengol and Delegate of the Government Aina Calvo, right

The Greek King will be buried in Athens on Monday, with the Spanish royals thought to be among those attending.

Constantine, who was also Prince William’s godfather and the nephew of the Duke of Edinburgh, died aged 82.

The last king of Greece – who was exiled in 1967 after a military coup – was admitted to the private Hygeia Hospital in Athens last week with breathing difficulties.

Staff at the private Hygeia Hospital in Athens said Constantine had been treated in an intensive care unit. 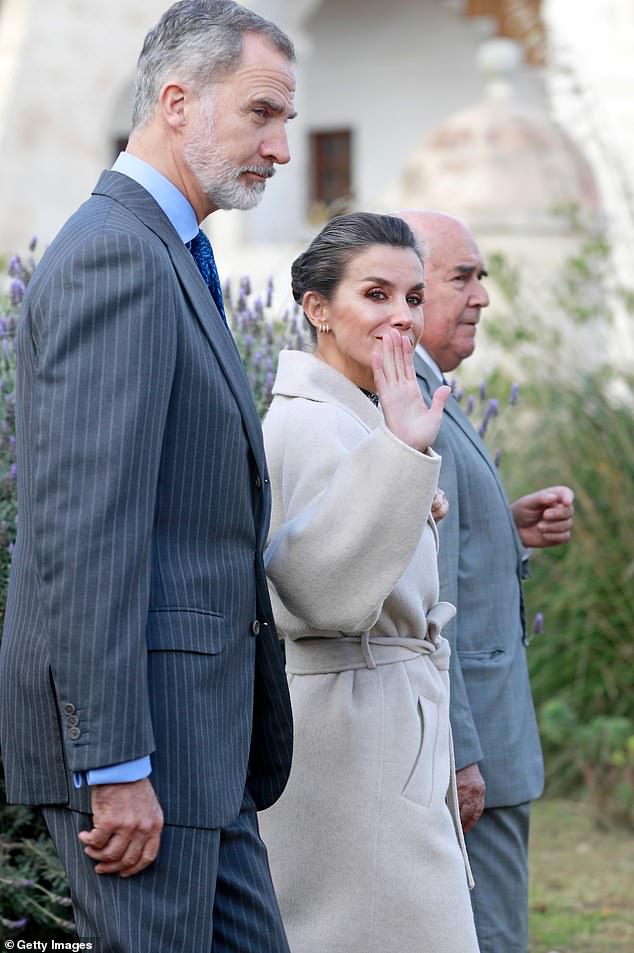 Letizia’s hair was styled in an elegant updo, with her trademark grey streak glimming in the light 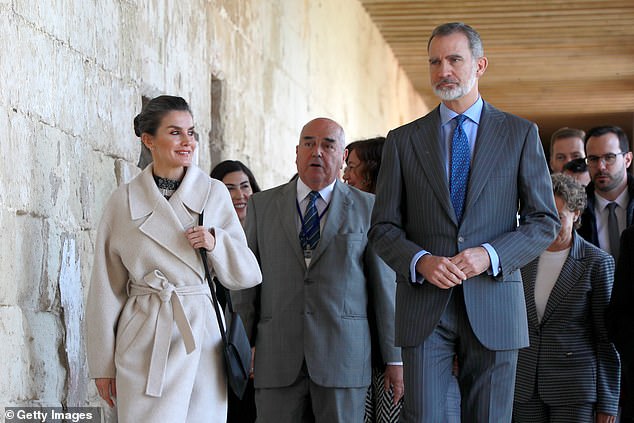 The Spanish Queen looked relaxed during the tour, while her husband appeared deep in thoughts 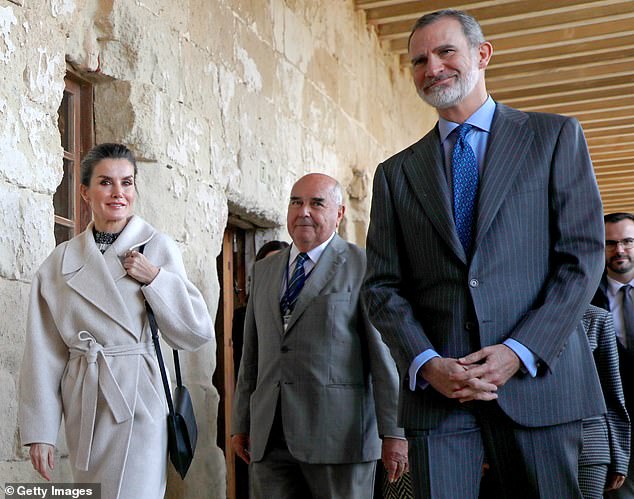 The King of Spain smile during the tour, which marks the couple’s first joined outing since the death of his uncle

When he acceded to the throne as Constantine II at the age of 23 in 1964, the youthful monarch, who had already achieved glory as an Olympic gold medalist in sailing, was hugely popular.

By the following year, he had squandered much of that support with his active involvement in the machinations that brought down the popularly elected Centre Union government of prime minister George Papandreou.

The episode, still widely known in Greece as the ‘apostasy’ or defection from the ruling party of several politicians, destabilised the constitutional order and led to a military coup in 1967. 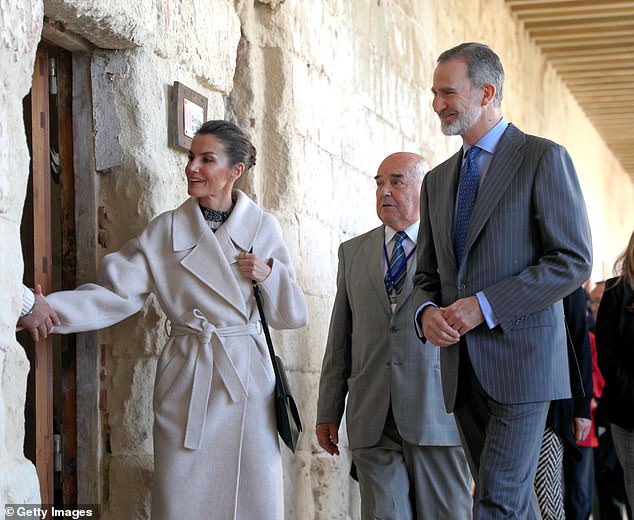 The couple got a warm reception at the hospital museum during their tour, with Letizia shaking hands 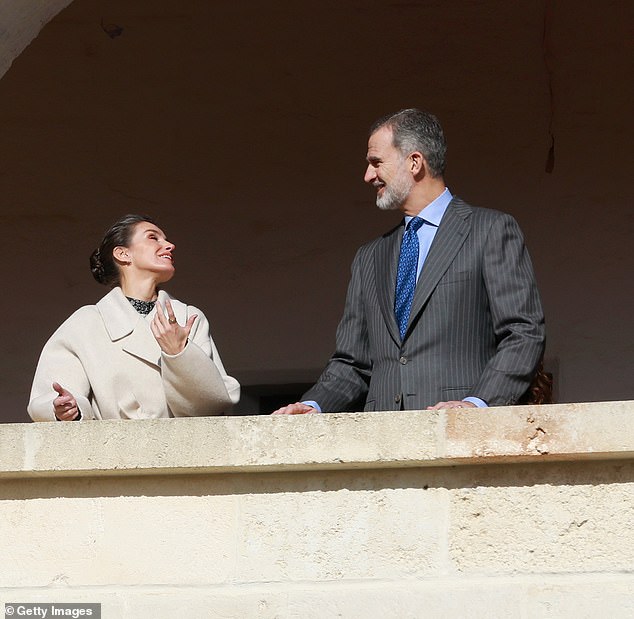 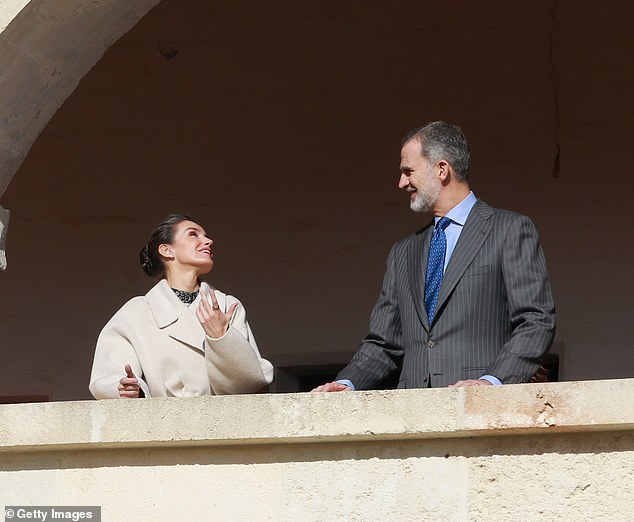 The pair seemed to be enjoying an animate conversation, with Letizia giving her husband a warm smile 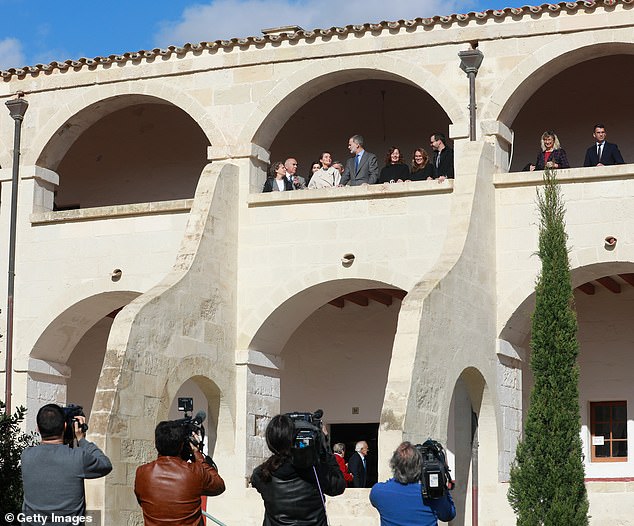 Constantine eventually clashed with the military rulers and was forced into exile.

The dictatorship abolished the monarchy in 1973, while a referendum after democracy was restored in 1974 dashed any hopes Constantine had of reigning again.

Reduced in the following decades to only fleeting visits to Greece, which raised a political and media storm each time, he was able in his waning years to settle again in his home country, when opposing his presence no longer held currency as a badge of vigilant republicanism.

With minimal nostalgia for the monarchy in Greece, Constantine became a relatively uncontroversial figure from the past.

Constantine was born June 2, 1940 in Athens, to Prince Paul, younger brother to King George II and heir presumptive to the throne, and princess Federica of Hanover.

His older sister Sophia is the wife of former king Juan Carlos I of Spain.

King Constantine of Greece dies aged 82: Prince William’s godfather and nephew of Prince Philip was final monarch to rule the country before being forced into exile after 1967 military coup

The new ‘Queen of Greece’! Billionaire heiress Marie-Chantal, 54, who runs a kid’s fashion label beloved by Kate fell ‘in love at first sight’ with Prince Pavlos – who is heir to the now defunct throne after his father’s death