Boris Johnson’s plan to use offshore wind farms to power every home in the UK within a decade could provide a major boost to the Queen’s finances, experts claimed today.

The Government already had a target to increase the amount of electricity generated by offshore wind from the current level of 10 gigawatts to 30GW by 2030.

But yesterday Mr Johnson used his Conservative Party conference speech to confirm that the target is now being increased to 40GW.

The green energy push could provide the monarchy with a windfall because the Crown Estate is responsible for awarding seabed rights for offshore renewable energy projects.

The Sovereign Grant paid to the royal household is based on profits from the Crown Estate which means an uptick in revenue could result in a bump in the grant. 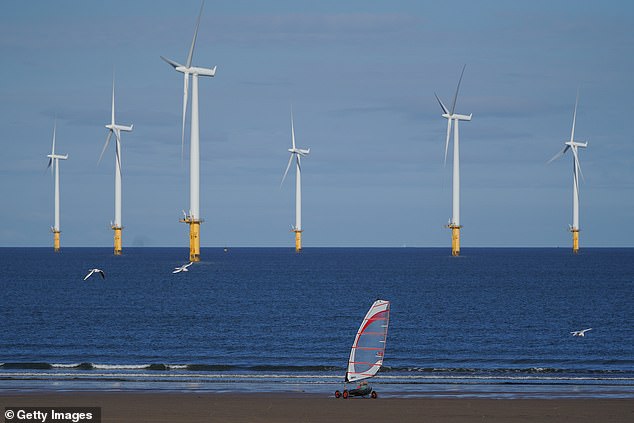 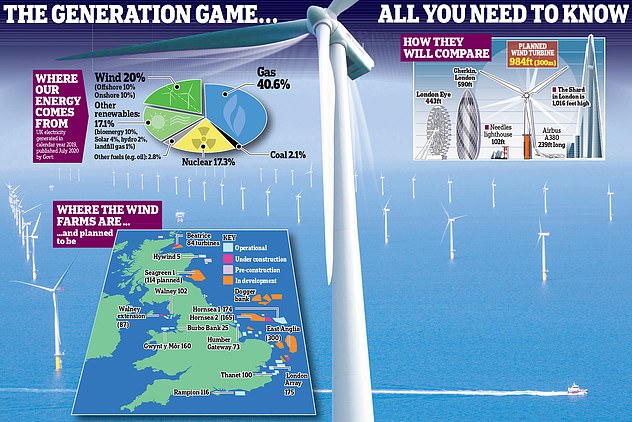 Royal expert David McClure, author of The Queen’s True Worth, told The Telegraph: ‘The more the turbines turn on the coastal wind farms, the more the Crown Estate becomes a money-spinner for the monarchy’.

A report published by the Crown Estate reportedly states: ‘As manager of the seabed and half the foreshore around England, Wales and Northern Ireland, the energy, minerals and infrastructure portfolio includes offshore energy, marine aggregates and cables and pipelines.

‘The portfolio’s value increased by eight per cent to £1.96 billion over 2019-20, largely as a result of the growth in offshore wind.’

The Sovereign Grant was introduced in 2012 and it sets the amount of money allocated to support the Queen’s official business.

In exchange for this public support the Queen surrenders the revenue from the Crown Estate to the Treasury. In 2018/19 this amounted to £343.5 million.

The size of the annual Sovereign Grant is normally equal to a proportion of the Crown Estate’s profit for the financial year two years prior – since 2017/18 it has been worth 25 per cent. In 2020/21 the grant is worth just shy of £86 million. 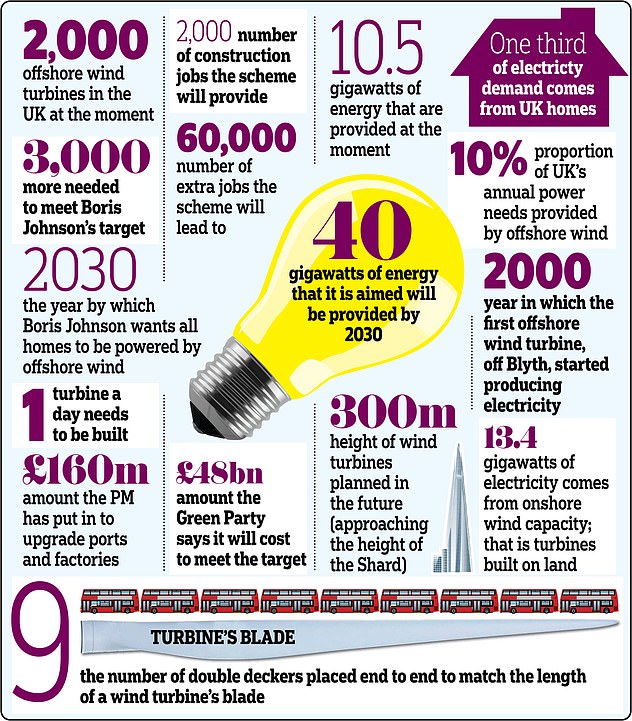 There is currently just under 10.5GW of wind in the seas around the UK, generating around 10 per cent of our electricity

Analysts have suggested the Prime Minister’s wind farm plan could cost £50 billion and require a new turbine to be installed every weekday throughout the 2020s.

Mr Johnson has pledged to move at ‘gale force speed’ to make Britain the world leader in offshore wind technology and create up to 60,000 jobs.

Yesterday’s announcement will see the Government invest £160million in upgrading ports and infrastructure in areas including Teesside and the Humber to help manufacture and install the next generation of offshore turbines.