A quarter of all sliced meats sold in British supermarkets are saltier than seawater, campaigners say.

They showed one of the worst offenders, Italian prosciutto ham sold by Sainsbury’s, was packed with 5.51g of salt per 100g. It means it is approximately 10 times saltier than fries served by fast food giant McDonald’s.

For comparison, the Atlantic Ocean has a salt content of around 2.5g per 100g, the campaign group claimed.

A different ham product, sold by Marks and Spencer, had a recommended serving size that would provide 45 per cent of an adult’s recommended daily salt intake.

Overall 25 per cent of the 555 meats analysed had at least 2.5g per 100g, including products that could be consumed by children in lunchtime sandwiches.

And two-thirds were defined as being dangerously high in salt, having at least 1.5g per 100g

Action on Salt wants voluntary salt reduction targets to be made compulsory, with penalties for those who refuse to comply.

Eating too much salt can lead to high blood pressure, a dangerous health condition that inflicts extra strain on the arteries and heart.

High blood pressure, which can lead to heart attacks and strokes, kills about 75,000 Britons and 500,000 people in the US every year.

NHS guidelines say that adults should stick to 6g of salt per day, with the limit for children between 2-5g depending on their age.

Action on Salt highlight some of the saltiest products per category in the study. Sainsbury’s Italian Prosciutto Crudo Slices, and Spanish Chorizo slices, were some of the high salt content charcuterie meats, with 5.51g and 4.2g of salt per 100g respectively. Tesco Finest Roasted Dry Cured Ham was flagged as a high salt meat with 1.7g per 100g. Adlington Cooked Sliced Free Range British Turkey, sold by Ocado, was highlighted as a high salt poultry product at 2.5g per 100g. When it came to beef, Co-op’s Corned Beef was a frontrunner with 1.7g of salt per 100g

This chart shows the percentage of sliced chilled meat products sold by supermarket chains under their own label which meet the UK’s salt reduction targets, the number to the right of the bar shows the number of products analysed in the Action on Salt study. Tesco was the front runner with 97 per cent of its product range meeting the targets while Waitrose was well behind the curve with only 7 per cent of its products meeting the guidelines

Action on Salt, working alongside researchers based at the Queen Mary University of London, surveyed products available between June and August 2021.

This was nearly 10 times that of Aldi’s Flame Grilled Chicken Slices, which contained 0.26g per 100g.

Experts also warned portion sizes suggested by some of the brands surveyed could lead to a person consuming high amounts of salt in a single meal.

They singled out M&S’s British Wiltshire Roast Ham, which contained 1.73g of salt per recommended portion of three slices.

It means a sandwich made using three slices of that ham would constitute nearly a third of an adult’s recommend 6g of salt per day.

And it would equate to over half of the recommended 3g for four-six year olds, and that is before including any additional salt from the bread or sauces.

The researchers also assessed the products by a series of voluntary salt reduction targets produced by the Government for the food industry to aspire to.

They are set to achieved by 2024 but are a repetition of previous targets set in 2017, which many producers failed to meet.

The study found a third of 312 products would fail the guidelines.

And the remaining 243 fell outside the remit of the salt reduction targets entirely, being granted an exemption on the basis they are outside of UK jurisdiction, such as Iberian Ham, or use a traditional curing method, such as Wiltshire cured ham. 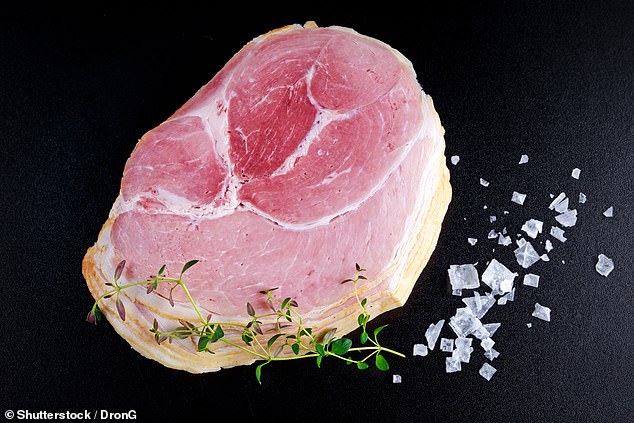 However, the authors said that these products have the highest overall salt content out of all those analysed.

Supermarket chain Tesco had the most products meeting the salt targets, with 97 per cent of its own label products within the guidelines.

But Waitrose was the worst offender, with 93 per cent of its products exceeding the salt content guidelines.

Sonia Pombo, campaign manager for Action on Salt, said the salt content in these types of meats was inexcusable given healthier flavour substitutes were available.

‘Why are these everyday sliced meats, which are frequently consumed by children, so high in salt when it is clearly not required for taste or food safety?’ she said.

‘Whilst some salt may be needed in processed meat, there is scope for extensive reductions, as demonstrated by some of the more responsible companies. There’s no excuse.’

Mhairi Brown, policy and public affairs manager for Action on Salt, said No10 needed to make the voluntary standards mandatory and punish those who failed to act.

‘If the UK industry can no longer comply with voluntary measures, then now is the time for mandatory, comprehensive salt reduction targets to ensure success and create a level playing field,’ she said.

Professor Graham MacGregor, an expert on cardiovascular health at Queen Mary University of London, said it was a ‘disgrace’ that food companies were not doing more to cut back on salt.

In comments provided to the researchers, a number of supermarkets giants argued they were acting to reduce the amount of salt contained in their food.

Waitrose’s partner and health manager, Emma Williams, said: ‘We know we have more to do on salt reduction in this area and are actively working to meet the 2024 targets set by Public Health England, making sure any changes do not compromise on taste or quality.’

A Tesco spokesperson insisted the health of their customers was important to them, stating it has been ‘reformulating our products for some time’. They added: ‘We will continue to do so without compromising on taste or quality.

‘Our reformulation plan looks at a wide variety of nutrients and ingredients important to supporting a healthy diet, including salt.’

M&S’s senior nutritionist, Rebecca Brown, said the food giant had reformulated some of its products just this month to reduce their salt content.

She added that M&S was committed to delivering further salt reductions to meet the UK’s 2024 salt targets.

Lidl GB’s nutrition team manager Miranda Shelley said the supermarket was continuously review the salt content of its cooked sliced to meat to reduce it when possible but added that this is tricky given the preservative function it provides.

A Sainsbury’s spokesperson said the products mentioned in the study ‘use traditional curing methods for these products which rely on the presence of salt to ensure quality and shelf life’.

An Asda spokesperson said the supermarket chain has reduced the salt content of its  chilled cooked meat ranges in line with government targets since 2019 and will continue to do so.

A Co-op spokesperson said they take customer health seriously, with 94 of its products already meeting the 2024 guidelines.

But, the spokesperson disputed the Action in Salt report highlighting the Co-op corned beef as an example of high salt content product, arguing it contained lower salt levels than other retailers corned beef.

A Department of Health spokesperson said the Government was working with the food industry to reduce salt levels in foods by 2024 and also acting to restrict advertising of foods high in salt.