A quarter of car buyers want to buy British to help the motor industry after Covid and the supply crunch, study claims

Car buyers say they are more likely than ever to buy British in a bid to help the industry recover from the Covid-19 pandemic.

Buyers are also feeling more inclined to purchase made in Britain models in the hope they can get their hands on vehicles quicker by leapfrogging to the front of the long order queues, as car makers continue to have their outputs limited by parts supply issues.

However, the study by What Car? identified one major issue with this good intention, as it found that one in five drivers polled didn’t know where their current car was built, even those produced in British factories.

Car buyers more willing to go British to help industry: A quarter of drivers currently in the market for a new model said are more likely than ever to purchase a motor produced in the UK

A quarter of ‘in-market’ buyers said they are more likely to buy from cars from UK brands or cars they know are manufactured in the country to support the domestic industry, according to the consumer publication’s poll of 1,141 motorists searching for their next motor at the moment.

It asked those currently perusing manufacturer websites and showrooms in the hunt for their next motor.

This is down from a high of 45 per cent from January 2021, when What Car? asked the same question during the third lockdown as showrooms were forced to close and sales plummeted by two fifths.

Latest industry figures published by the Society of Motor Manufacturers are traders show that UK car outputs are almost a third (31 per cent) down year-on-year, slumping to the lowest level in well over a decade.

In the first two months of 2022, 130,447 cars left UK plant assembly lines, which is down from 191,060 in the same period a year earlier significantly lower than before the pandemic.

To put the figures into perspective, this year’s production is already down on a year that saw the lowest UK car output since 1956. 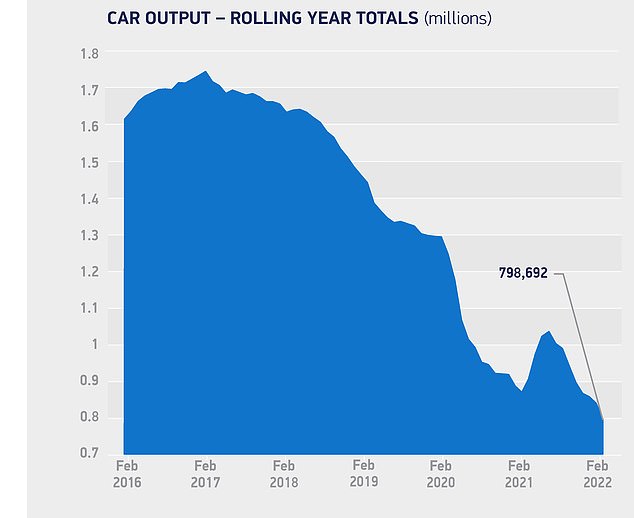 The latest figures from the SMMT show that only 61,657 motors left assembly lines in February, down from 105,008 recorded in the same month in 2021

Overall UK car production in the first two months of 2022 are almost a third down on 2021. To put that into perspective, last year was the lowest for British motor outputs since 1956

The semiconductor drought continues to be a major toll on the sector, with Mini’s Oxford plant forced to shut down for five days in February due to a lack of chips to go into its cars.

Parts supply issues have also resulted on the back conflict in Ukraine has also limited the availability of other vehicle components, especially wiring looms for electronics.

While a quarter of buyers said they were more likely to buy British, the survey also found that three in five (61 per cent) respondents believe it important for buyers in general to support British manufacturers and car brands.

The country of manufacturer is important for 43 per cent of all buyers surveyed, with one in ten claiming it very important and saying it dictates their purchase decision.

When it comes to waiting longer for cars built in Britain or cars from British brands, 46 per cent said they wouldn’t mind a longer lead time compared to other vehicles.

The semiconductor drought continues to be a major toll on the sector, with Mini’s Oxford plant forced to shut down for five days in February due to a lack of chips to go into its cars

For some brands, such as Jaguar Land Rover, waiting times for particular models are in excess of 12 months.

What Car? also surveyed whether buyers know where their current car is manufactured, with 20 per cent of owners unaware of their car’s country of origin.

Commenting on the study findings, Steve Huntingford, editor at What Car?, said: ‘Though the need to support domestic businesses has dropped from the highs seen during the worst months of Covid, buyers are still aware their purchase can help manufacturers operating in the country.

‘This is particularly important for a sector that employs more than 797,000 people and contributes £11.9 billion in added value to the UK economy.’