Vladimir Putin’s health has been brought into question yet again as new footage emerged today of the Russian president seemingly unable to use his right arm.

It happened at the same event where Russia’s authoritarian leader signed a new military doctrine that accuses the United States of being Moscow’s greatest threat.

Meanwhile Putin and his friends are making preparations to flee Russia should his army be defeated in Ukraine, according to a Telegram channel that claims to come from inside the Kremlin.

The video clip captured the moment Putin, 69, was given a tour of a military museum as part of a weekend of festivities marking Russia’s Navy Day, celebrated on the last Sunday of every July.

The Kremlin chief is seen speaking with Ksenia, daughter of defense minister Sergei Shoigu, when mosquitoes begin buzzing around the right side of his face.

Putin raises his left arm in an attempt to swat them away while his right arm hangs limply by his side.

He continues to itch and swat all around his head with one arm before walking alongside Ksenia with a slight limp as she continues her tour.

The clip is the latest of a litany of videos which appear to show the Russian president walking with a limp, struggling with strange ticks including odd foot and leg contortions, and un-coordinated movement.

The Kremlin chief (centre) is seen speaking with Ksenia, daughter of defence minister Sergei Shoigu (left), when mosquitoes begin buzzing around the right side of his face 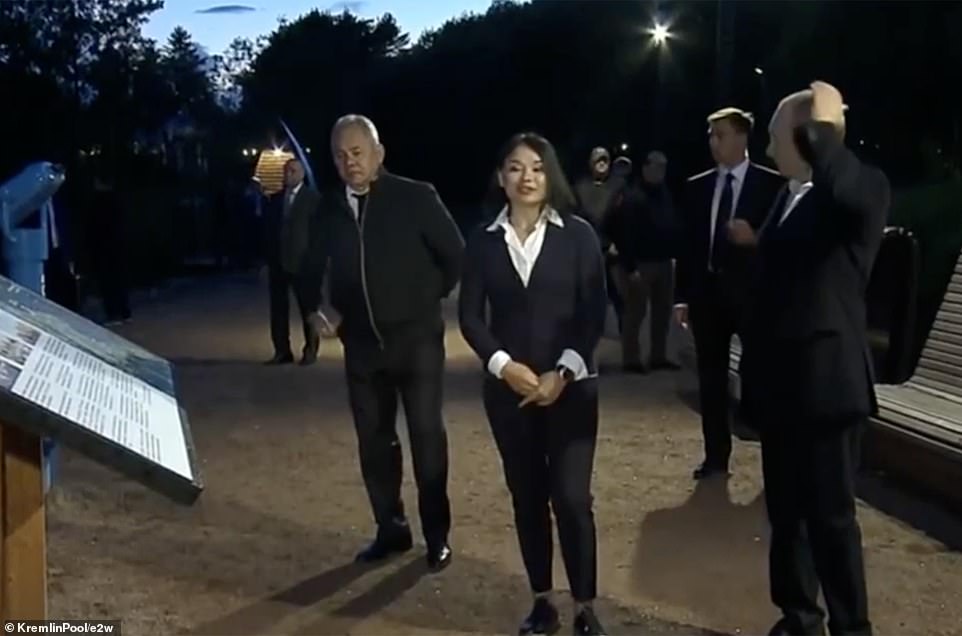 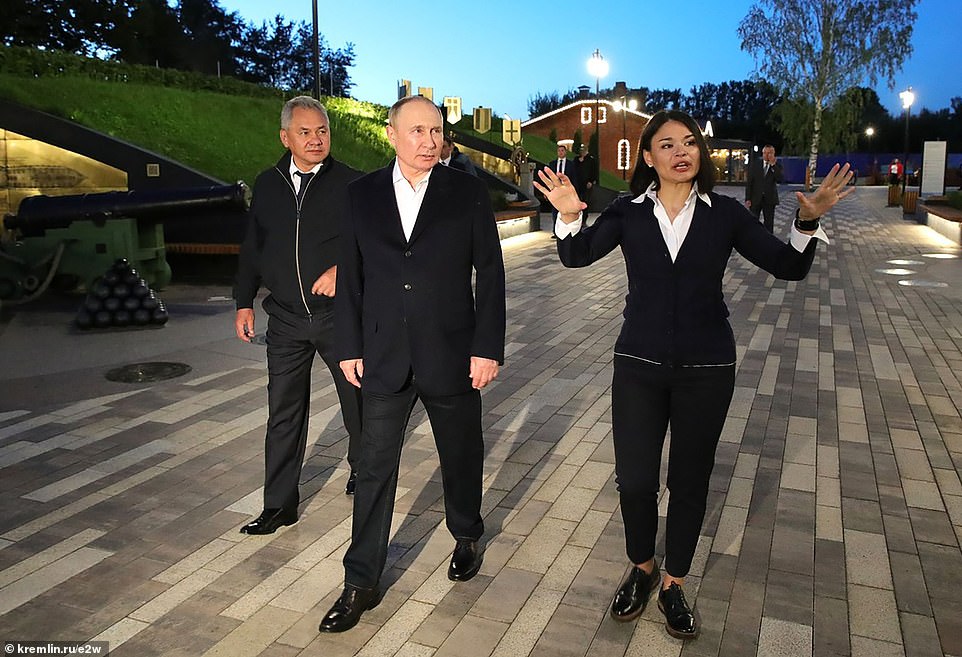 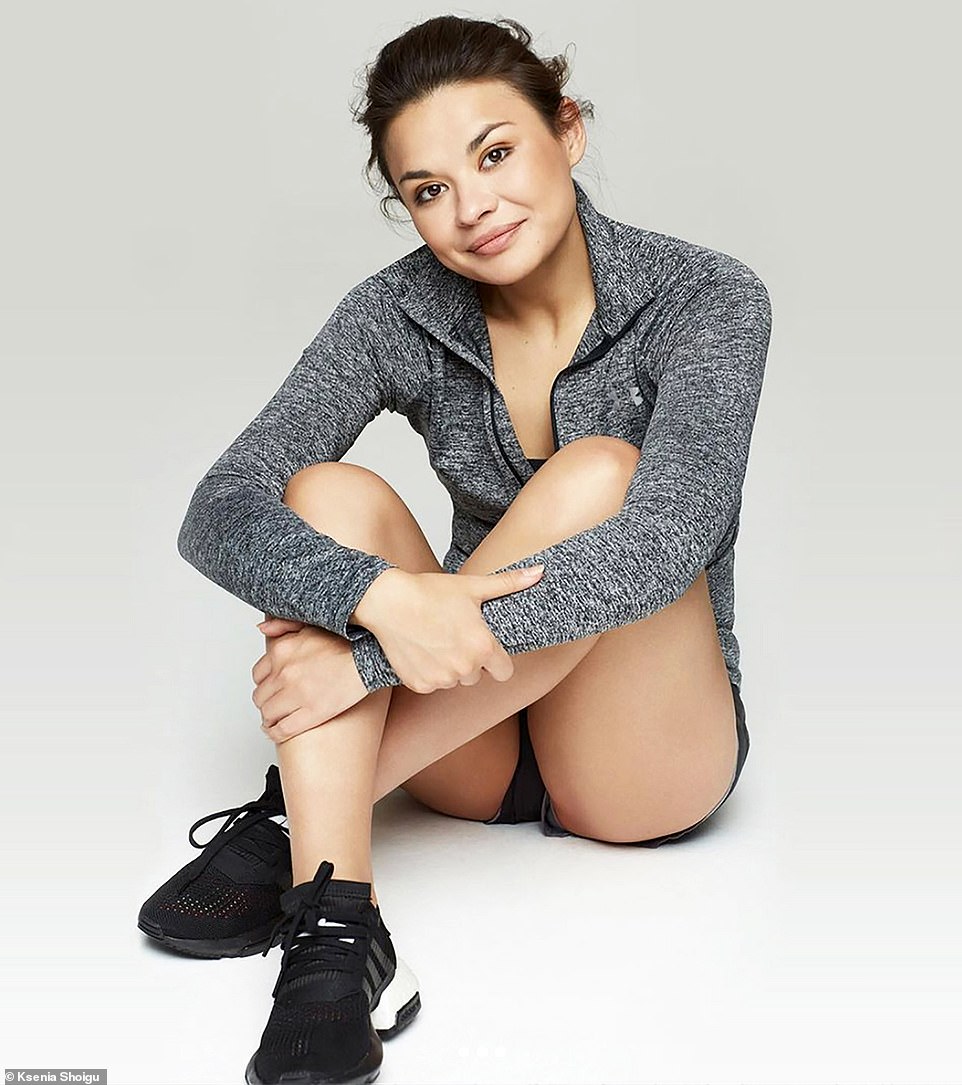 Ksenia Shoigu, 31, is the daughter of Russia’s Minister of Defense Sergei Shoigu

However despite his apparent ill health, Putin was clear in his threat to the West when bragging about Moscow’s new supposed Zircon hypersonic cruise missiles, according to Reuters.

The autocrat was vague about where the weapons would be based, claiming that they would go where Russia’s interests dictate.

‘The key thing here is the capability of the Russian navy,’ Putin said. ‘It is able to respond with lightning speed to all who decides to infringe on our sovereignty and freedom.’

The new doctrine he signed casts NATO’s expansion toward Russia as an existential threat to Moscow. The idea of Ukraine joining NATO was among Putin’s justifications for invading Ukraine in February.

The other supposed threat is ‘the strategic policy of the USA to dominate the world’s oceans.’ 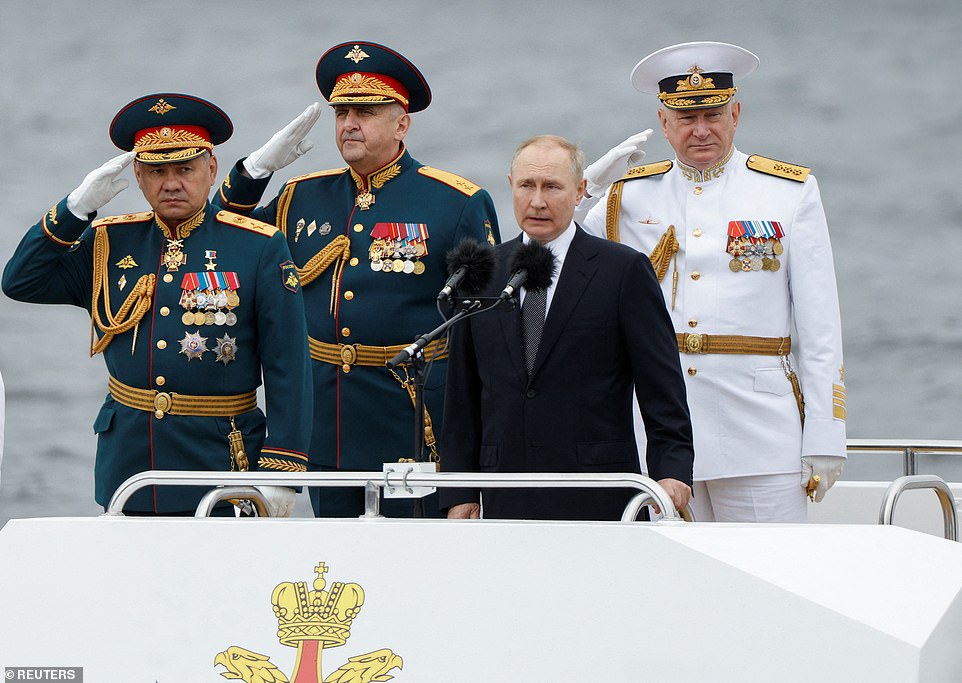 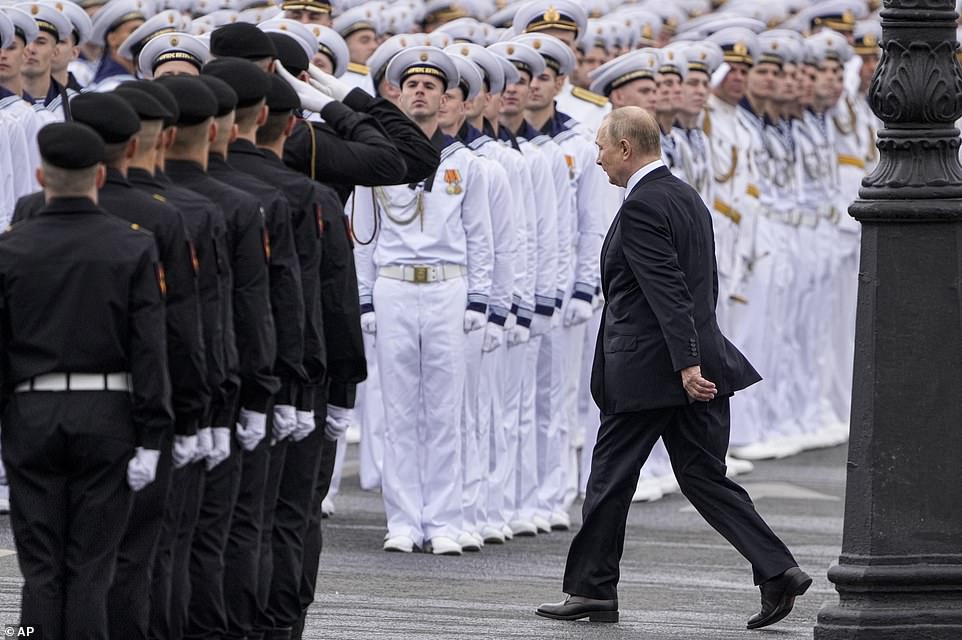 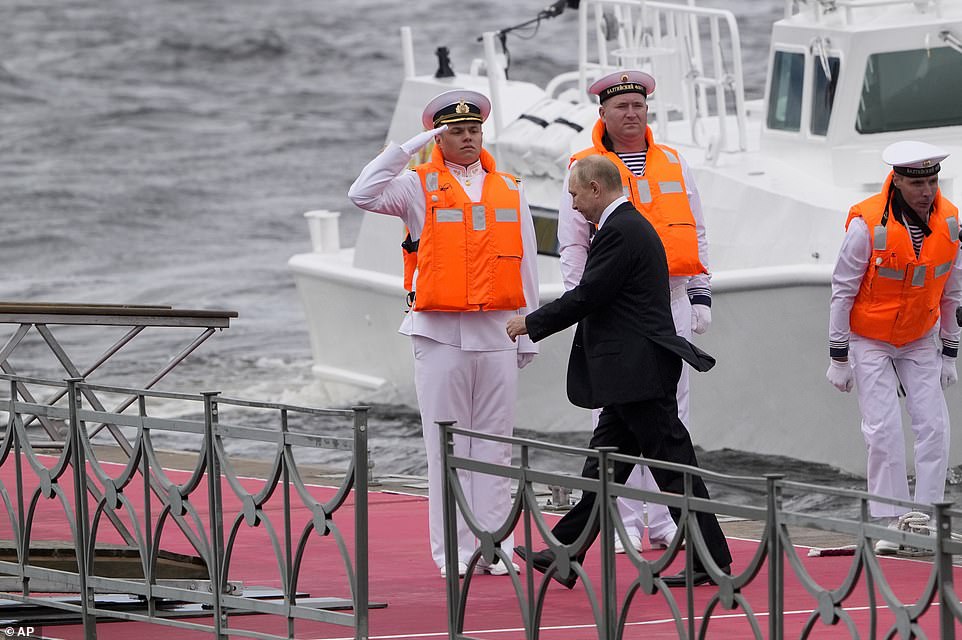 Putin walks along the gangway after exiting his Raptor boat amid the Navy Day celebrations in St. Petersburg 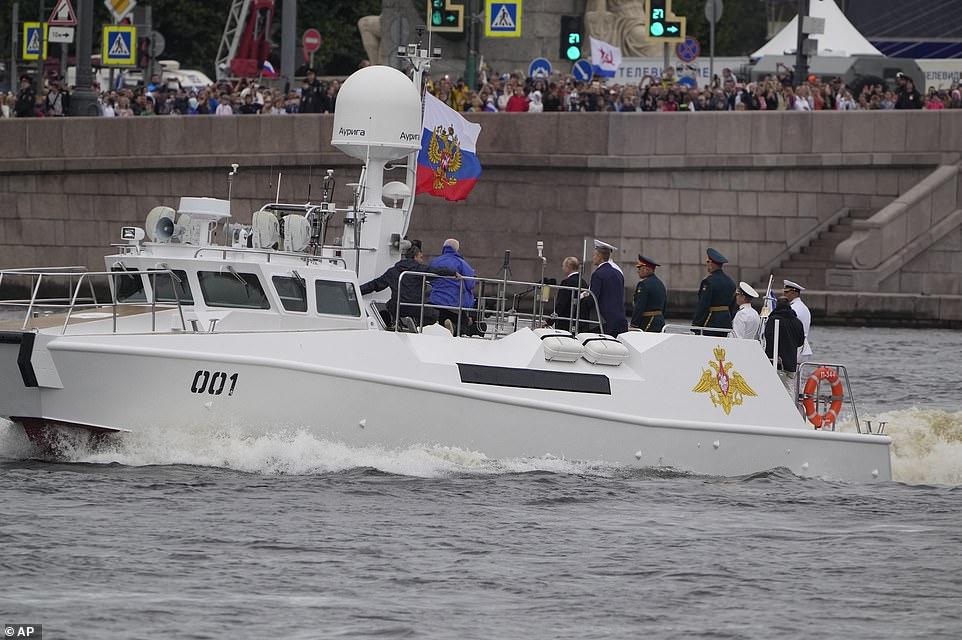 Russian President Vladimir Putin arrives aboard a Raptor-class parade vessel to attend the military parade during the Navy Day celebration, in the Neva River in St. Petersburg, Russia, Sunday, July 31, 2022

Speaking on Russia’s Navy Day aboard a vessel in St Petersburg, Putin praised Russian Tsar Peter the Great for making Russia a great sea power, and boasted of the unique capability of the hypersonic weapons.

‘The delivery of these (missiles) to the Russian armed forces will start in the coming months,’ Putin said. ‘The Admiral Gorshkov frigate will be the first to go on combat duty with these formidable weapons on board.

‘The key thing here is the capability of the Russian navy… It is able to respond with lightning speed to all who decide to infringe on our sovereignty and freedom.’

Hypersonic weapons can travel at nine times the speed of sound, and Russia has conducted previous test-launches of the Zircon from warships and submarines over the past year.

Russia’s leader did not make reference to Ukraine in his speech, but stressed the missiles would be deployed wherever Moscow’s interests lie.

There has been widespread speculation over the apparent decline of Putin’s health in recent months, with various sources suggesting the despot is struggling with a series of afflictions such as cancer and Parkinson’s.

The General SVR Telegram channel, which claims to be operated by a former officer from Russia’s Foreign Intelligence Service, has long reported on Putin’s supposed health conditions and recently suggested he is sometimes replaced by a body double for public appearances in periods of particularly poor health.

The channel suggested Putin last week was afflicted by ‘severe nausea’ on Friday and Saturday, with doctors deployed to his bedside for more than three hours.

Following on those reports, that same Telegram channel said in recent days that ‘Putin himself and his entourage are preparing plans for evacuation from Russia,’ citing his awareness ‘of the possibility of a sharp change of mood in the country’ over his invasion of Ukraine.

It is thought that any plane carrying Putin and his family out of Russia would head to fellow dictatorship Syria, the nearest friendly state and whose leader, Bashar al-Assad, Putin bailed out by intervening in the Syrian civil war in 2015.

Any flight from Russia to Syria, however, would have to fly through the airspace of Turkey, a NATO member.

Were Turkey’s strongman leader, Recep Tayyip Erdoğan, to refuse permission to the plane carrying Putin and his family to enter his airspace, it would effectively scupper the Russian tyrant’s quickest and perhaps only getaway route.

Erdogan and Putin have a complex relationship, having been friends and enemies at various times over the past decade as each leader tries to navigate their country through a challenging geopolitical neighbourhood.

Iran is another regional power – and Western foe – that would be interested in Putin’s fate.

‘In principle, it is beneficial for Iran and Turkey to keep the Russian president in exile in reserve, using him, depending on the situation, as a lever or as a bargaining chip,’ the channel states.

Telegram’s body double theory was echoed by head of Ukrainian military intelligence, who speculated that a lookalike stand-in may have been used for his arrival at a recent trip to Tehran.

It was only the second time Putin had been abroad since launching his brutal invasion of Ukraine more than five months ago.

Ukraine’s head of military intelligence, Major-General Kyrylo Budanov, said of the moment Putin arrived in Tehran: ‘Please look at the moment of Putin’s exit from the plane.

However, CIA director William Burns said recently that Putin was ‘too healthy’ and that there was no intelligence he was ailing.

‘There are lots of rumours about President Putin’s health and as far as we can tell he’s entirely too healthy,’ Mr Burns said at the Aspen Security Forum in Colorado earlier this month.

British MI6 director Richard Moore later added: ‘There is no evidence that Putin is suffering from serious illness.’ 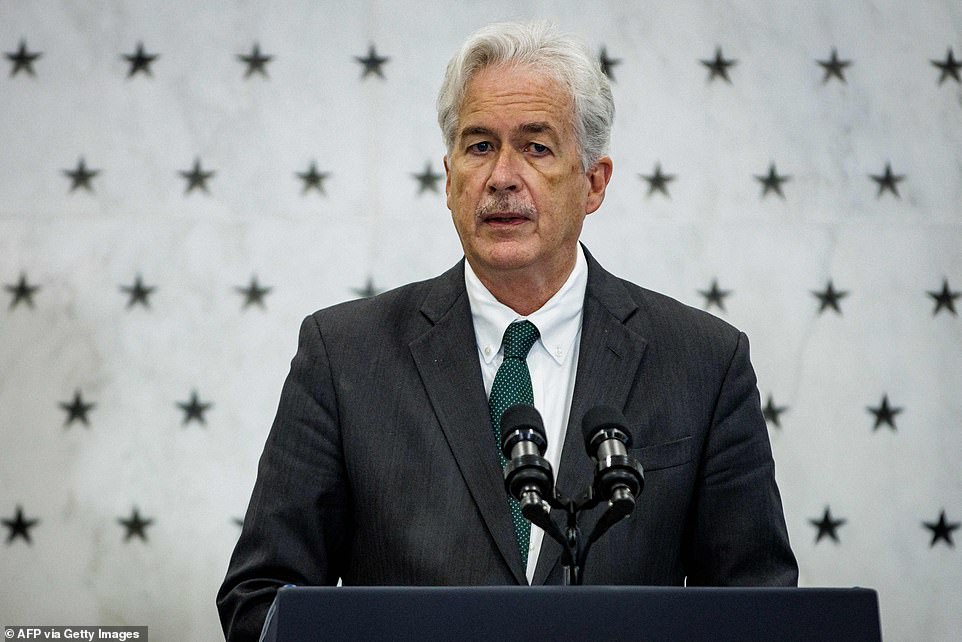 William Burns, speaking at the Aspen Security Forum in Colorado, said he fears Putin is ‘entirely too healthy’ 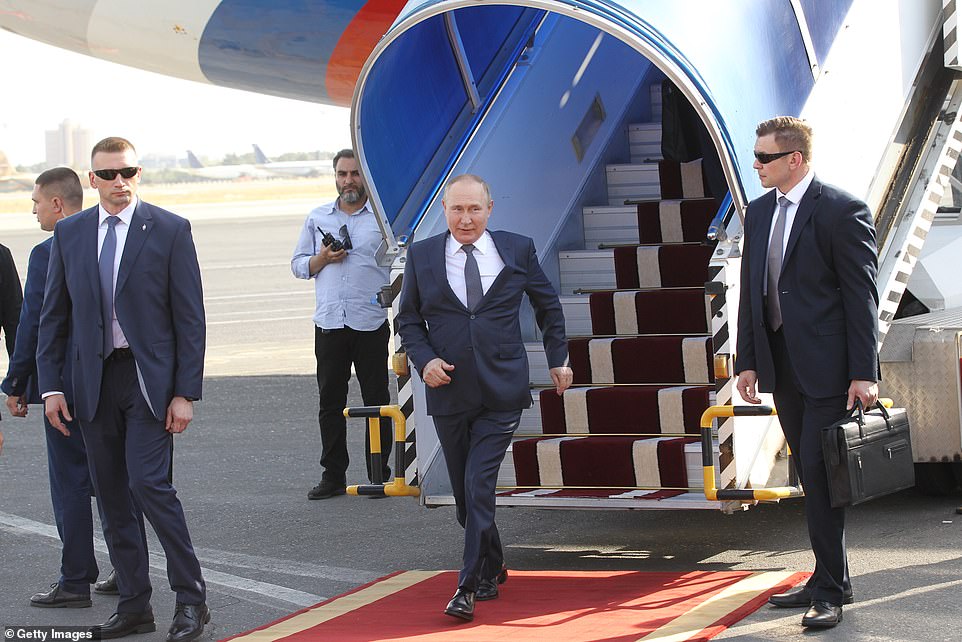 ‘The Americans, the CIA particularly, have information on the real state of health of the Russian president,’ he said.

‘They definitely know that he has serious troubles, including mental ones.’

Solovey, a former professor at Moscow prestigious Institute of International Relations [MGIMO] who claims to have insider knowledge of Putin’s condition, suggested that Mr Burns’ claim Putin is ‘too healthy’ was made because the US is involved in behind the scenes negotiations with Russia over the war in Ukraine.

The Kremlin insists Putin is in good health and has dismissed any suggestion the president’s health is declining as complete fabrication.

It comes after the US government was publicly revealed to have offered Russia a prisoner swap that would include handing over infamous arms dealer Viktor Bout – nicknamed ‘the merchant of death’ – in exchange for WNBA player Brittney Griner and retired US Marine Paul Whelan. The offer was first reported by CNN.

Government officials are reportedly frustrated at the lack of a response from Russia. The offer was made in June and personally greenlit by President Joe Biden.

Secretary of State Antony Blinken pressed his Russian counterpart Sergei Lavrov to agree to the deal during a ‘frank’ phone call on Friday.

Lavrov reportedly took umbrage at the public nature of the prisoner swap discussions.

‘Regarding the possible exchange of imprisoned Russian and U.S. citizens, the Russian side strongly suggested a return to the practice of handling this in a professional way and using ‘quiet diplomacy’ rather than throwing out speculative information,’ the Russian Foreign Ministry said.

The US also dismissed Russia’s reported request to add convicted killer Vadim Krasikov to the swap as a ‘bad faith offer.’ Krasikov is being held by German authorities.