Vladimir Putin is set to make an ‘important statement’ about his invasion, according to a Moscow-appointed official in a Russian-occupied region of Ukraine.

Vladimir Rogov, a member of the Administration Council of the Zaporizhzhia region, announced the Russian president would be delivering the speech on Wednesday.

The address will be part of events marking the 80th anniversary of when Russians broke the siege of Leningrad by the forces of Nazi Germany, when Soviet forces managed to open a narrow land corridor to the city on 18 January 1943.

As chairman of the We Are Together with Russia, Rogov advocates for the occupied regions of Ukraine to be fully absorbed into the Russian federation.

Vladimir Putin is set to make an ‘important statement’ about his invasion, according to a Moscow-appointed official in a Russian-occupied region of Ukraine

He made the announcement on his Telegram channel, and it was later reported by Russian media. However, no official statement from the Kremlin has yet been made.

Public appearances by Putin have often been teased by Russian officials, before being cancelled at the last minute. The practice makes Putin’s movements difficult to track, and could be a tactic for that exact purpose.

It was claimed today the Russian despot has become ‘withdrawn, silent and deeply preoccupied’ as he undergoes new medical treatment.

The 80th anniversary celebrated will mark when Soviet forces managed to open a narrow land corridor to Leningrad – now called St. Petersburg – during the Second World War on 18 January 1943.

It is seen as a key moment in Moscow’s victory over the Nazis in eastern Europe in the Second World War. To this day, Russia often shamelessly invokes its battle against the Nazis as a means to justify its war in Ukraine.

Putin and his Kremlin allies have often claimed they are working to ‘deniazify’ Ukraine, despite its claims of Kyiv being led by a Nazi government being baseless.

The Russian leader had been expected in the north-western city this week, with reports suggesting he was planning to appear at the Monument to the Heroic Defenders of Leningrad for a flower laying ceremony. 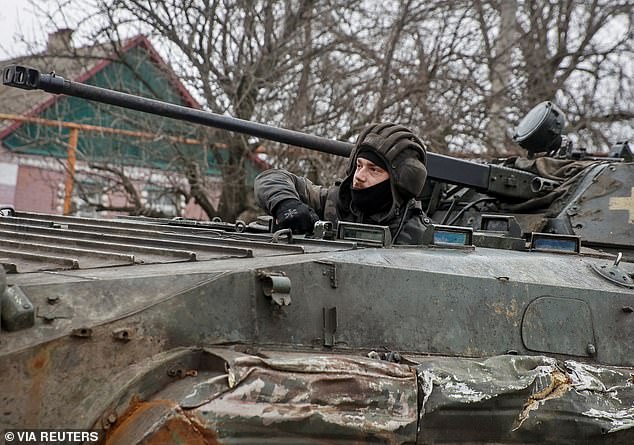 A Ukrainian service member looks out from a BMP-2 infantry fighting vehicle, amid Russia’s attack on Ukraine, on a frontline near the town of Soledar in Donetsk region, January 14, 2023 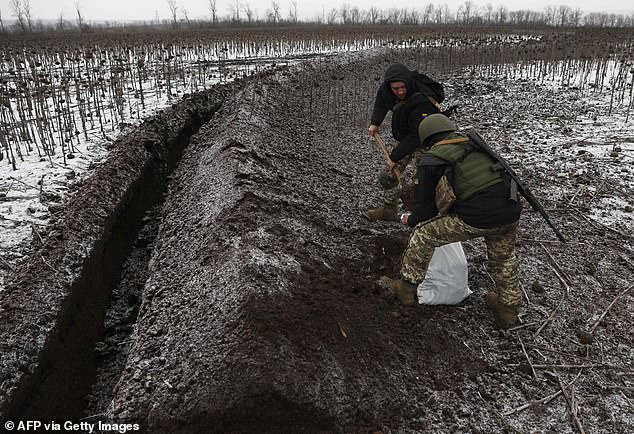 Ukrainian soldiers equip trenches on a field not far from Soledar, January 14, 2023

It was unclear on Tuesday what the topic of Putin’s touted speech would be about, but it’s announcement comes after NATO Secretary General Jens Stoltenberg said the war in Ukraine was entering ‘a decisive phase.’

Russia has made small gains in the eastern Donbas region, largely taking control of Soledar – a small salt mining town near the more significant target of Bakhmut.

Kyiv says it is still fighting there: ‘Our units are located in Soledar and are constantly hitting the enemy with fire,’ Serhiy Cherevaty, a Ukrainian military spokesman, said.

The claimed victory gave Putin a rare win in the war after a string of embarrassing defeats since his forces were pushed back from the Kyiv region in the early months of the war – although Soledar is a far cry from Putin’s ultimate goal of full control.

Ukraine came a step closer on Tuesday to winning the fleet of modern battle tanks it hopes could turn the course of the war against Russia, after the West’s big holdout Germany said this would be the first item on its new defence minister’s agenda.

In an interview with German media on Sunday, Stoltenberg meanwhile said Ukraine can expect more deliveries of heavy weapons from Western countries soon.

‘We are in a decisive phase of the war,’ Stoltenberg said. ‘Therefore, it is important that we provide Ukraine with the weapons it needs to win.’

Nearly 11 months after Russia invaded, Kyiv says a fleet of Western battle tanks would give its troops the mobile firepower to drive Russian troops out in decisive battles that will be fought into 2023.

German-made Leopard battle tanks, workhorse of armies across Europe, are widely seen as the only plausible option available in sufficient numbers. But they cannot be delivered without authorisation from Berlin, which has so far demurred.

Elsewhere, In the central city of Dnipro, authorities called an end to the search for survivors in the ruins of an apartment building destroyed during Russian missile attacks on Saturday.

Forty-four people were confirmed killed and 20 still unaccounted for in the attack, the deadliest for civilians of a three-month Russian missile bombardment campaign. Seventy-nine people were wounded and 39 rescued from the rubble.