Vladimir Putin’s legs have buckled during a speech in Moscow, adding to the growing rumours of the Russian leader’s health woes.

The president was attending an awards ceremony at the Kremlin on Sunday when he appeared unsteady on his feet.

The 69-year-old swayed back and forth before his speech as Russian filmmaker Nikita Mikhalkov accepted a prize.

He then took to the podium and appeared to shake before both of his legs buckled, forcing him to grip the stand for support.

Putin managed to continue with his speech and maintain his balance after the slight wobble, but the incident represents the latest piece of evidence to suggest the Russian despot is battling a litany of health problems.

It comes just days after a Kremlin insider claimed Putin had been advised by doctors not to make any ‘lengthy’ public appearances, having fallen ill amid recent discussions with his military chiefs.

The Russian President felt ‘a sharp sickness, weakness and dizziness’, while getting up from his desk following a recent video conference with advisers and military leaders, Telegram channel General SVR reported last week.

‘The President needed urgent medical assistance,’ claimed the channel which purports to have sources in the Kremlin and has made repeated claims over Putin’s alleged medical problems, including cancer and Parkinson’s disease.

The channel also cited the ‘dizziness’ incident to explain last week’s abrupt announcement that Putin’s annual ‘Direct Line’ live broadcast – a marathon Q&A when he answers questions from ordinary Russians over several hours – was postponed with no replacement date fixed.

It had been pencilled in for the second half of June or early July, but now no date is specified. Such unexplained cancellations are causing theories about his declining health to gain currency in the West.

Vladimir Putin’s legs have buckled during a speech in Moscow, adding to the growing rumours of the Russian leader’s health woes 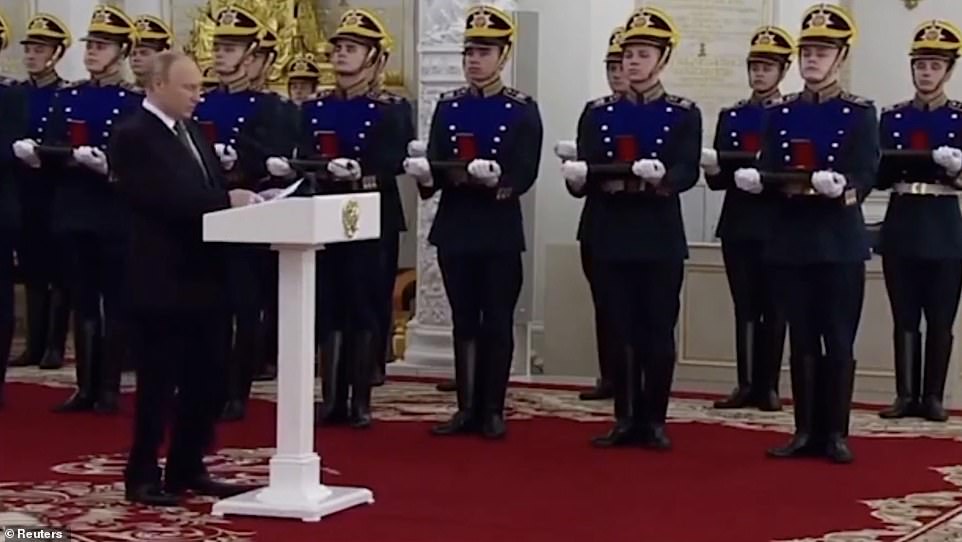 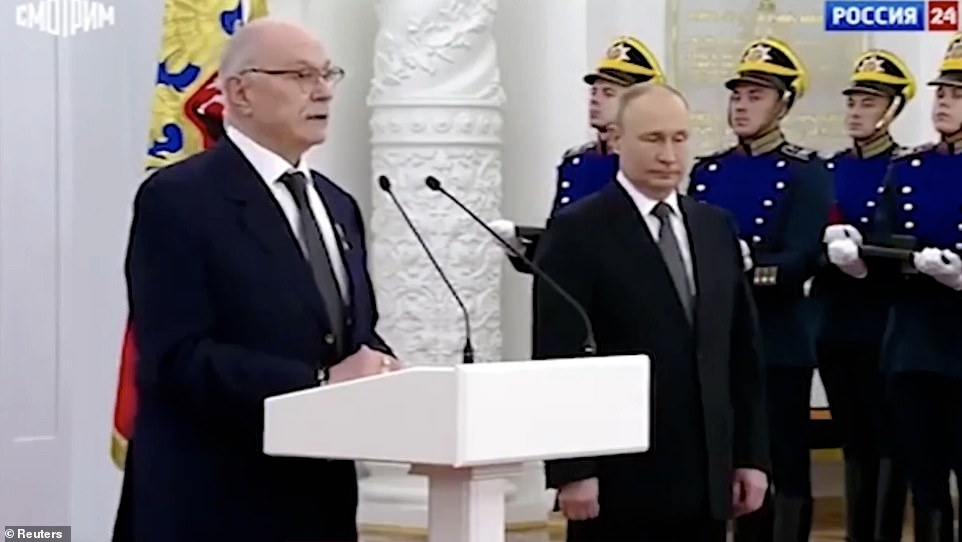 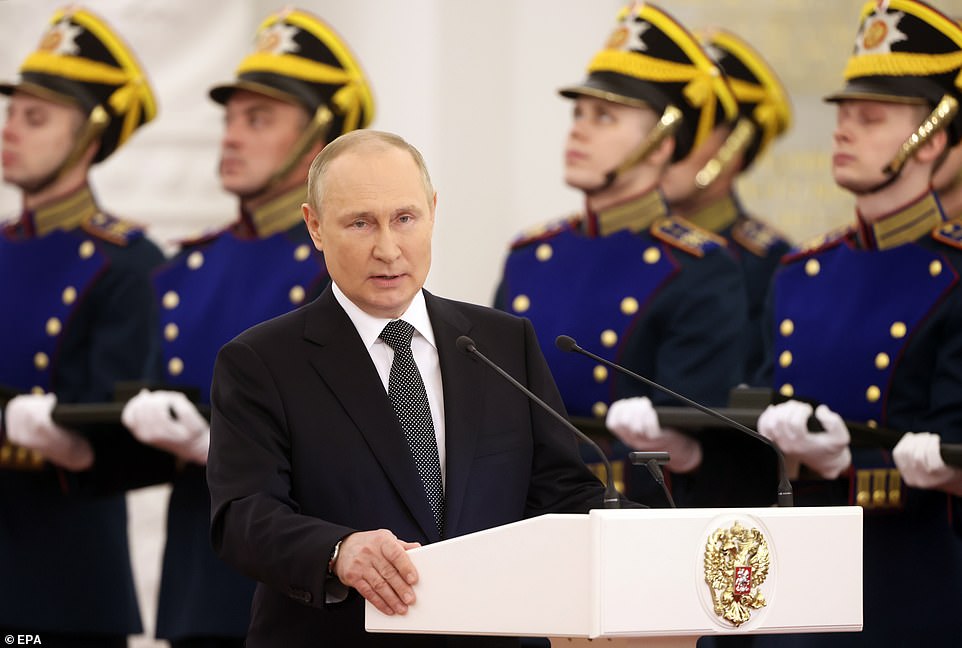 Rumours over Putin’s deteriorating health have circulated for years but are rapidly gaining ground in light of recent events.

Myriad photos and videos have emerged since the invasion of Ukraine began in which the Russian leader appears bloated and uncomfortable, while other clips have shown him experiencing seemingly uncontrollable leg tremors and walking with poor co-ordination.

He has previously been seen in footage with a violently shaking hand and also gripping the side of his chair for stability.

Weeks ago, an officer from the Federal Security Service of Russia claimed Putin has ‘no more than two to three years to stay alive’.

An FSB officer described the Russian president’s condition as a ‘severe form of rapidly progressing cancer’, as speculation ramped up that Putin was suffering with some form of serious illness amid the invasion of Ukraine.

Putin reportedly underwent ‘successful’ cancer surgery and is recovering following advice from medics that treatment was ‘essential’, according to Telegram channel General SVR.

General SVR claims to be authored by an exiled Kremlin lieutenant-general insider, known by the alias Viktor Mikhailovich, who purportedly has access to information the Kremlin refuses to publish.

It was the first outlet to suggest Putin was suffering from cancer.

But Kyiv military spy chief Kyrylo Budanov said previously he fears the Russian leader still has a ‘few more years’ left in him.

His comments suggested the Ukrainians believe Putin is suffering from cancer, but are unclear on how severe the condition could be and to what extent it could impede Putin’s ability to direct Russian military strategy and exert influence over the country.

The major-general also claimed Putin was the target of an assassination attempt shortly after launching his invasion.

He said the abortive bid was by representatives of the Caucasus, but did not release further details. 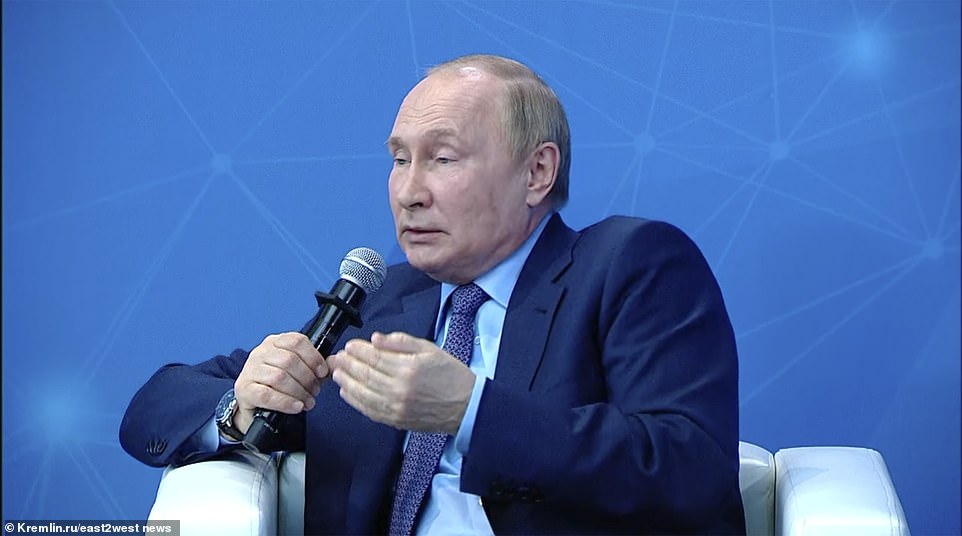 Vladimir Putin (pictured last week) has been advised by doctors not to make any ‘lengthy’ public appearances after he fell ill amid discussions with his military chiefs, a Kremlin insider has claimed 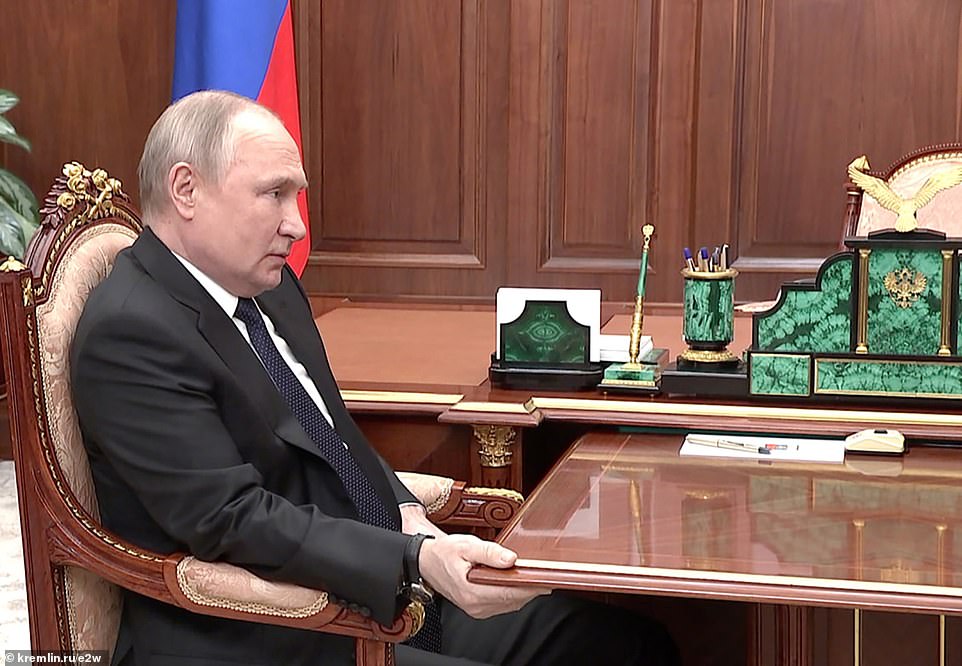 This infamous image of a bloated, hunched Putin gripping a table as he spoke with defence minister Sergey Shoigu earlier in the war triggered speculation over his declining health

The report mirrored other claims that top-ranking Russian officials are said to be plotting a government without Putin, with Kremlin sources claiming insiders are already looking for ways to replace the Russian President.

The news outlet Meduza quoted sources claiming that high-ranking officials in Russia’s security services FSB and GRU – referred to as ‘hawks’ – believe Putin has botched the invasion and want to seize control of the operation.

One method of ‘moving things on’ without need for a violent coup would be to place him in a long term hospital for the incurably unwell, suggested former MI6 chief Richard Dearlove.

Rumours in Moscow persist that Putin has undergone recent surgery to treat his illness.

But in an interview with French TV, Foreign Minister Sergei Lavrov said no one ‘sane’ could see any signs of illness in Putin, who reportedly has his food tested before eating it and bans his staff from standing too close to him.

‘You can watch him on screens, read and listen to his speeches,’ Lavrov said in comments released by the Russian foreign ministry.

‘I leave it to the conscience of those who spread such rumours.’

It comes after a new report revealed that his bodyguards have been collecting his excrement while on foreign trips in a bid to stop people gathering information about his health.

Federal Protection Service members are ‘responsible for collecting his bodily waste’ in special packets which are kept inside a dedicated briefcase until they return to Russia.

According to two investigative journalists at French news magazine Paris Match, the collection of Putin’s excrement is part of the Federal Protection Service’s job, as they are tasked with protecting high-ranking state officials at whatever cost.

Reporters Regis Gente, who wrote two books on Russia, and Mikhail Rubin, who has covered Russian current affairs for over ten years, say that two examples of Putin excrement collections were of the President’s visit to France on 29 May 2017 and to Saudi Arabia in October 2019.

In both of these instances, it is alleged that Putin either had a private toilet brought along with him during the trips, or that he was accompanied to the bathroom by several guards. Another theory is that he uses a ‘porta-potty’ everywhere he goes. 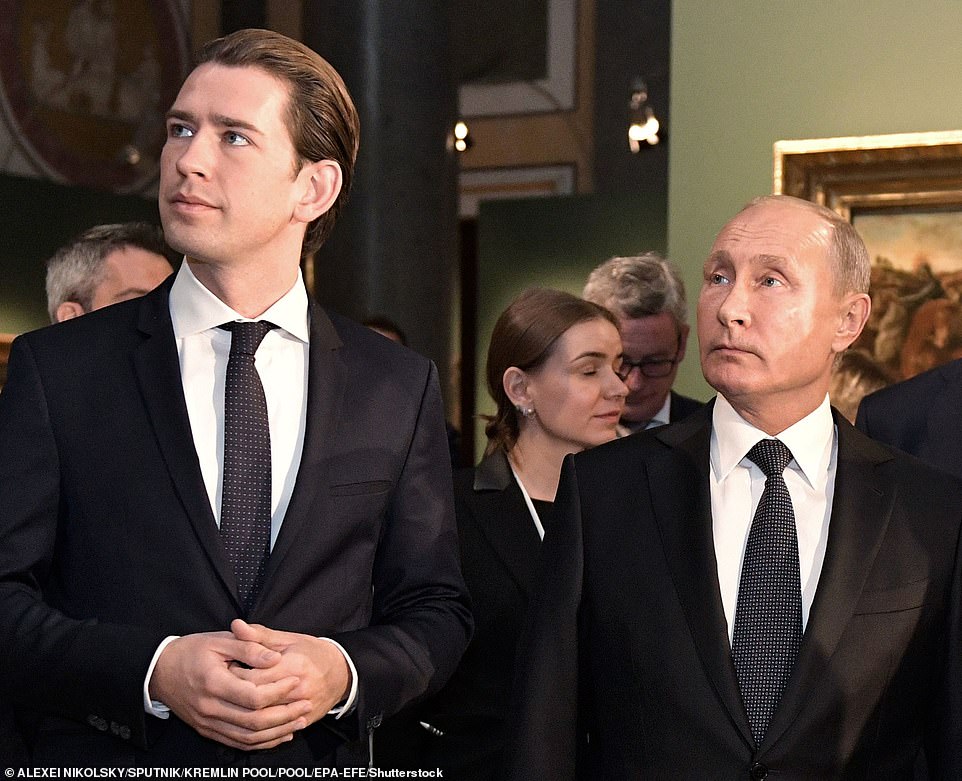 It is understood that the excrement collection is a way to stop people gathering information about his health. Pictured at the Kunsthistorisches Museum in Vienna, when actress Julia Louis Dreyfus was told by museum staff that President Putin (right, with Austrian Federal Chancellor Sebastian Kurz left) had arrived with his own private bathroom 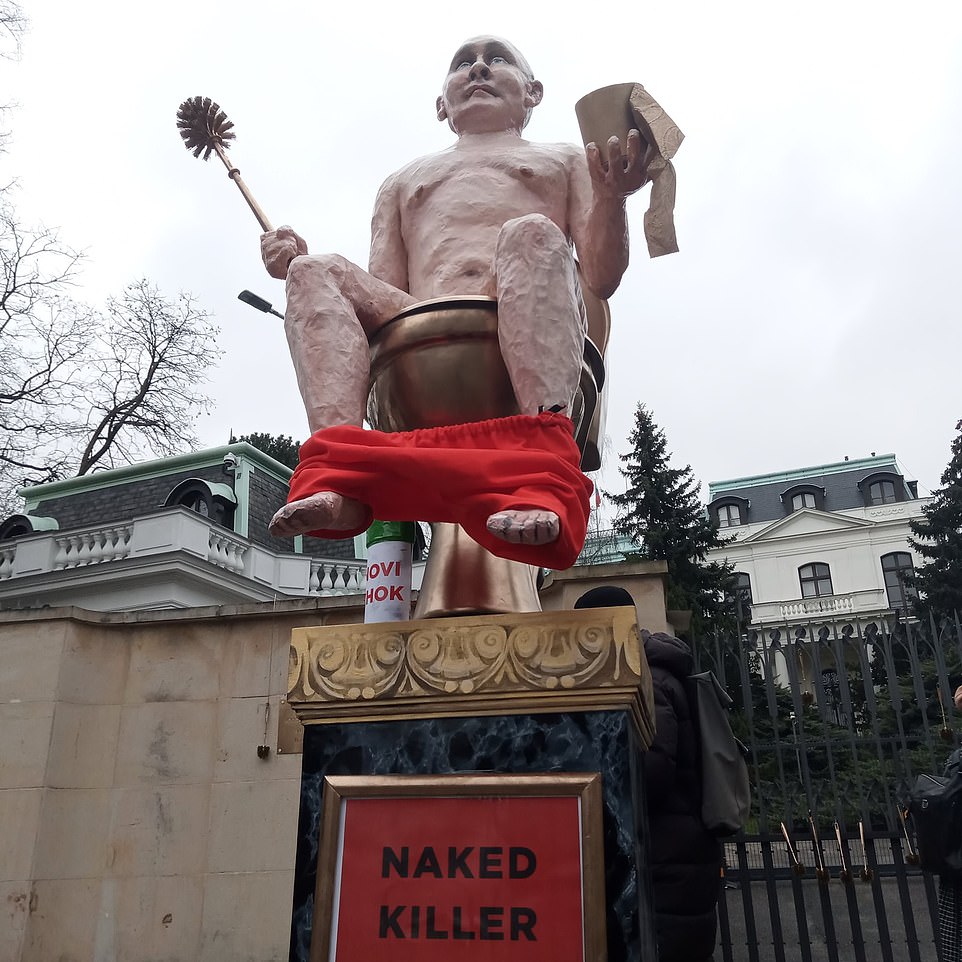 A report has revealed that Russian president Vladimir Putin’s Federal Protection Service members are ‘responsible for collecting his bodily waste’ in special packets which are kept inside a dedicated briefcase until they return to Russia. Pictured is a statue depicting Putin on the toilet outside the Russian Embassy in Prague in 2021 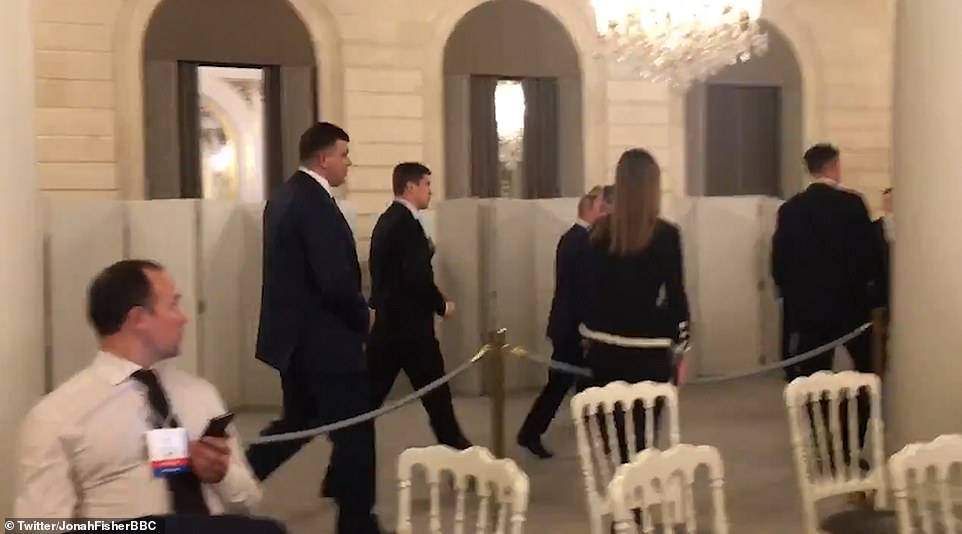 One example of this happening could be in December 2019, when Putin was spotted going to the toilet with six bodyguards while at a Ukraine summit in Paris (pictured)

One other example could be in December 2019, when Putin was spotted going to the toilet with six bodyguards while at a Ukraine summit in Paris.

The Russian leader, 67 at the time, was filmed leaving the bathroom after five bodyguards made sure his surroundings were safe. Another bodyguard walked behind him as he left the toilet in Paris’s Elysee Palace.

Farida Rustamova, an ex-BBC journalist, also confirmed the report by explaining on Twitter that a source of hers, who is reportedly an old acquaintance of Putin’s, said he has been taking his own toilet on foreign trips since the beginning of this rule.

She revealed that she was aware of an incident at the Kunsthistorisches Museum in Vienna, when actress Julia Louis Dreyfus was told by museum staff that President Putin had arrived with his own private bathroom and a ‘porta-potty’.

Intelligence-gathering via excrement collection is not a new venture by a world leader. In 2016, an ex-Soviet agent said he found evidence that Soviet Union leader Joseph Stalin had investigated founder of the People’s Republic of China Mao Zedong by analysing his waste matter.

Igor Atamanenko told a Russian newspaper that in the 1940s Stalin’s secret police set up a top secret laboratory to study people’s faeces.

During Mao’s 10-day visit to Russia in the winter of 1949, special toilets were set up for the Chinese leader’s waste products to be collected and studied. Instead of being connected to sewers, those lavatories led to special boxes where Mao’s stolls were whisked off for analysis.

‘In those days the Soviets didn’t have the kind of listening devices which secret services do today,’ he told the paper, according to the BBC.

‘That’s why our specialists came up with the most extravagant ways of extracting information about a person.’