Purr-fect pairing! Meet Pōhaku the ‘dog-like’ adventure cat who loves hiking and biking on camping trips with his (human) dad

By Miriam Kuepper For Mailonline

A cat has gone on a series of camping adventures with his ‘dad’ – even going hiking with him in the Peak District.

Kyle Kana’iaupuni Robertson, 31, got his cat Pōhaku in March last year and they have been inseparable since – and he soon discovered his new pet was ‘dog like’ in his love of adventure.

Speaking to MailOnline about their adventures together, social researcher Kyle said: ‘We both get a little separation anxiety and I get excited every time I come home, while he is a bit annoyed with me for being away.’

After venturing out to a nearby Sheffield park for on-lead walks, Kyle took his ‘furry son’ further afield on hikes through the Peak District where he could let him roam freely. 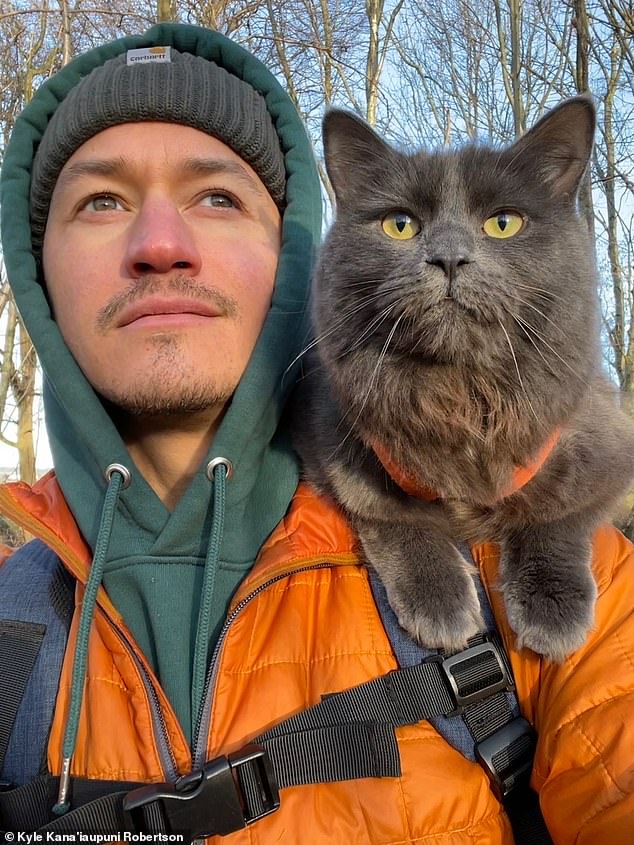 The successful hikes and later bike rides gave Kyle the idea to test his cat’s camping abilities: ‘I always wanted to have a cat to do these things with.

‘We just understand each other and feel empathy for another’, he said.

Pō, as he calls his cat for short, is a Russian Blue Ragdoll and feels the most comfortable sitting on Kyle’s shoulders like a parrot.

Kyle said: ‘We always talk to each other, although Pō’s answers sound like ‘brddrddrdd’. He’s really funny and is like a little toddler that wants to be picked up by me sometimes.’ 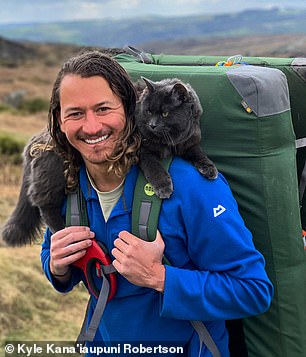 Pōhaku’s name is an homage to Kyle’s Hawaiian roots, where the word has a sacred connotation as ‘made from the gods’ and goes back to rocks who have the ‘mana’ or spirit of Hawaiian gods and people’s ancestors in them.

For their camping adventures, the proud cat dad bought a converted van.

They usually camp a bit away from everyone, so Kyle can leave the doors open and let his cat explore.

He said: ‘He is already used to traveling in the van and thinks it’s his second home!’

Always coming with the two are Pō’s favourite toy, a rubber frog, his litter box and woolen cave as his bed, but he prefers to stay in his owner’s:

‘Once an hour I wake up to him scrambling under the duvet and staring at me’, the social researcher said.

They went to a campsite near Mam Tor in the Peak District for their first trip.

The cat owner said: ‘As soon as we got there, I let him sniff everything out and then we just walked out into the fields, sat there on a picnic blanket and I drank some red wine while enjoying the sunshine.’

A lot of planning goes into each trip, as Kyle’s priority is for Pō to be comfortable. He said: ‘He doesn’t like it when it’s windy or wet like most people don’t. 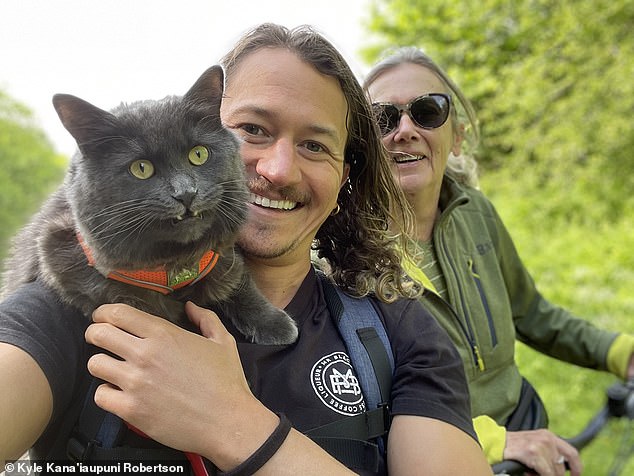 So far, Pō’s been to Liverpool to pick up his ‘grandma’ from Hawaii at the airport. Next on the cards are exploring the Lake District and a trip to a beach – possibly in Whitby – in autumn

‘For the trips, I usually ensure we have good weather and if we’re on a hike together and I can tell he’s not enjoying it, we turn around to go home. It has to be for him and is not supposed to be a show for other people.’

While he went camping with Pō and one or two other friends before, he doesn’t want to overwhelm his ‘son’ with a big group.

So far, Pō’s been to Liverpool to pick up his ‘grandma’ from Hawaii at the airport.

Next on the cards are exploring the Lake District and a trip to a beach – possibly in Whitby – in autumn.

‘We just need to wait until it’s a little cooler. He’s pretty fluffy so I have to be careful that he doesn’t overheat’, the London-native said.

Despite wanting to venture out further than their home base in Sheffield, going as far as Cornwall ‘might be a little much’ for his fluffy friend, according to Kyle.