Pupils as young as three at Holly Willoughby’s former £10,000-a-year girls’ school are being encouraged to complete 50 fun activities at nursery to combat epidemic of child screen addiction

Pupils as young as three at Holly Willoughby’s former £10,000-a-year school are being encouraged to complete 50 fun activities to combat screen addiction.

Burgess Hill Girls School in West Sussex have drawn up a list of ’50 things girls should do by the age of five’ to help get young girls ‘off iPads and up trees’.

School authorities hope they can nip the growing epidemic of screen addiction among children in the bud by offering early alternatives to phones, tablets, and TVs, all of which have been blamed for rising levels of child obesity across Britain.

This push comes as research commissioned by the National Trust and the Government has found that children are spending less time outdoors than ever. 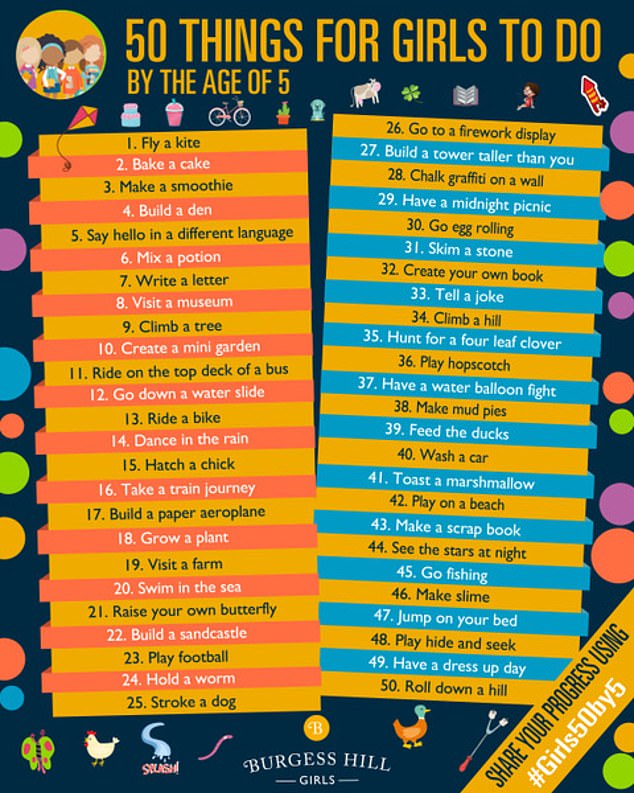 Pictured above is Burgess Hill Girls School’s list of 50 fun activities designed to get children back outdoors, away from computer, tablet, and television screens

In order to combat growing childhood lethargy, schools are being encouraged to get children away from computer and TV screens, and back in the wild.

The 50-item list, aimed to curb obesity in children before they reach primary school, includes tree-climbing, kite-flying, stone-skimming, and dancing in the rain. It also encourages toddlers to dig for worms, have water balloon fights, bake cakes, jump on their beds, roll down a hill, and hunt for a four-leaf clover.

Research commissioned by the National Trust in 2018 found that children spend half the time playing outside that their parents did.

It showed that children are playing outside for an average of just over four hours a week. This compares unfavorably with 8.2 hours for their parents when they were children.

A study by the British Government also found that 10 percent of respondents had not been in a park, in a forest, or on a beach for at least one year.

Overall engagement with outdoor rural spaces has declined in the modern age, and highly dependent on both the parent’s attitudes to outdoor activity, and their socio-economic status.

Meanwhile, children are being bombarded with new entertainment mediums, from more established tech like TV and film to cutting edge games, social media, and mobile phones.

Headteacher Liz Laybourn claimed the list was aimed at encouraging parents to get their children out into the real world and experience new adventures instead of sitting at home on devices, gadgets, and in front of screens.

‘In a nutshell, we hope that this programme will get girls off iPads and up trees!’ she explained.

‘We also want to encourage the boldness that our girls are known for.

‘From a very young age, we see girls who display fearless and curious personalities but as they become teens there is a tendency for some of them to adopt a more cautious outlook, take less risks in their learning and fear failure.’

The programme drawn up by Burgess Hill Girls School is thought to be the first of its kind to deliberately target children under five years old.

School authorities say the list will be sent out to all parents whose children are set to attend the prestigious school.

However, it is not a compulsory requirement for entry into the school, which claims as its alumni This Morning presenter Holly Willoughby.

Under the scheme children tick off activities each primary school year before they move on to secondary education.

Mrs Layburn added: ‘At Burgess Hill Girls, getting stuck in is our mantra.

‘The willingness to try new things gives young girls a fantastic platform for when they start school. We hope our list will inspire girls and their families to get out and explore the world around them.’