Pub owners have warned customers to only turn up if they have pre-booked a table as bosses prepare to reopen after being shut for more than three months.

Customers are expected to be allowed back into pubs from July 4 as they are allowed to open again after shutting on March 20 just before lockdown began.

But pub-goers may be asked to register before having a drink at their local under plans to limit the spread of Covid-19 as England’s hospitality industry reopens.

Some pubs already have all their tables reserved on the opening day – dubbed ‘Super Saturday’ – with staff taken off furlough to help cope with bookings.

And politicians are expected to go on a PR blitz around the country to encourage people to return to pubs which will reopen with social distancing measures in place. 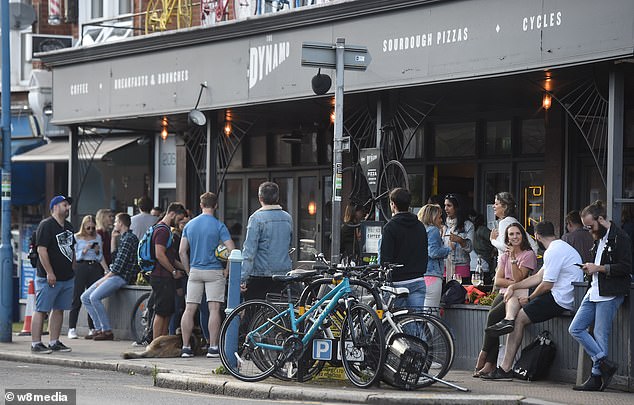 Customers queue up for a drink outside The Dynamo bar in Putney, South London, on June 19

Boris Johnson will urge the Cabinet today to be at the forefront of a campaign to persuade Britons that it is safe to return to pubs, reported the Financial Times.

It has been suggested some Ministers might go to the pub for a PR stunt, with a Government official saying: ‘There’s a job to be done to encourage people to go out.’

What will the pubs of the post-lockdown era in Britain look like?

Here is an outline of what Wetherspoon pub customers will experience post-lockdown:

Meanwhile car parks and hotel grounds could be converted into temporary beer gardens to help with social distancing by encouraging drinkers outside.

New laws due to be introduced to Parliament this Thursday will allow pubs to turn their ‘spaces inside out’ this summer, reported the Daily Telegraph.

One source said: ‘At the moment, you (pubs) have to specify in the plan for your licence where you are selling and serving alcohol. Beer gardens tend to be licensed already but car parks aren’t.

‘You could have little courtyards that would be normally used for storage, car parks or land that you don’t normally license. A lot of hotels will have huge gardens but won’t have an outdoor licence.’

Peter Borg-Neal, chief executive of Oakman Inns, told BBC Radio 4’s Today programme this morning: ‘We will be taking bookings only in the early stages.

‘So we will have names through our normal booking system. However it would seem to me a sort of strange replacement for a trace and contact scenario, but if the Government would like us to do it, then we’ll happily do it.’

‘I think it will evolve, but on day one we want to be very, very certain about what we’re doing. We want to make sure that everyone there feels reassured, that the staff feel happy with what’s going on and feel able to keep it all under control.

‘We would perhaps develop as time goes by and allow people to turn unannounced, but then that they must realise that they may not get a table because you can’t just have people stood in the bars, it will be table service only in those early weeks.

‘We are very, very foreready for the first day, so we do need to warn people that if they’ve not got a table then they shouldn’t come.’

Mr Borg-Neal revealed last Friday that many of his sites are fully booked on July 4 and they are having to take more staff off furlough to handle the bookings.

A spokesman for the Peach Pubs chain added that it was ‘fully booked’ already for the first weekend at six of its largest pubs which are due to open on July 4.

Ministers are looking at the possibility of asking bars and restaurants to keep a record of everyone who visits, including their mobile phone numbers.

The idea has been used in New Zealand where venues hold a register of everyone they serve each day. If someone falls ill with coronavirus, the list is then used to help with contact-tracing. 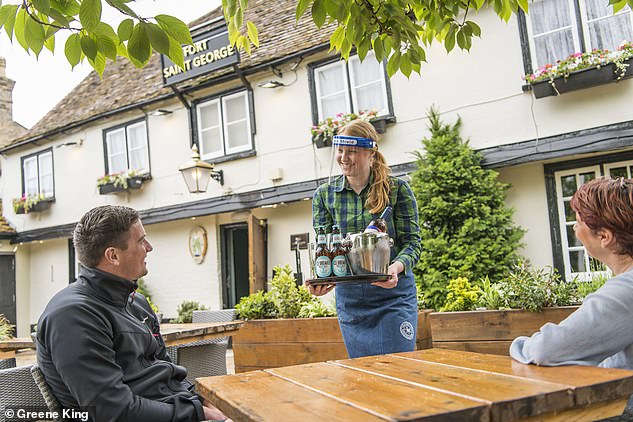 Pub chain Greene King revealed a new ‘safe socialising’ layout to its 1,700 pubs ahead of July 4 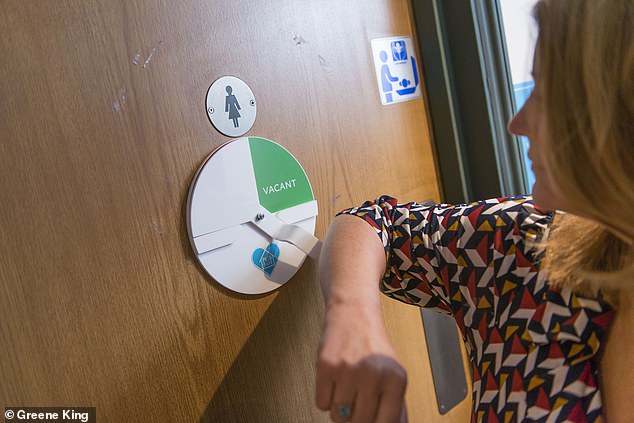 Bars and restaurants are expected to be allowed to resume more normal trading from July 4 as the hospitality sector reopens. 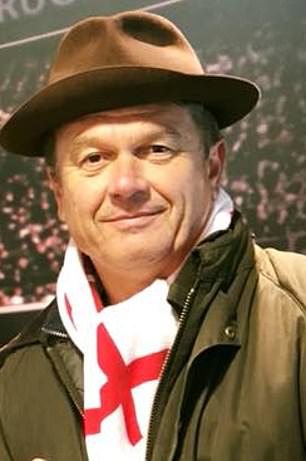 Peter Borg-Neal, chief executive of Oakman Inns, said the chain is taking ‘bookings only in the early stages’ as it prepares to reopen

Many pubs and bars are already taking advantage of lockdown rules that allow them to sell takeaway food and drinks, and as the sun shone yesterday drinkers were out in force.

Ministers are expected to publish guidelines this week on what measures venues can take to operate safely.

In restaurants, waiters will be told not to lay tables until diners are seated, with napkins and cutlery brought out only with food.

Menus will have to be thrown out after being used once. Self-service buffets will be banned and waiters will be expected to wash their hands between serving different tables.

Hotel guests will be encouraged to use room service rather than dining in restaurants, with food left on trays in corridors. If guests become ill they will be asked to either go home or self-isolate in their rooms.

Prime Minister Boris Johnson is expected to say today that the tourism and hospitality sectors will be allowed to reopen on July 4 for the first time since March. 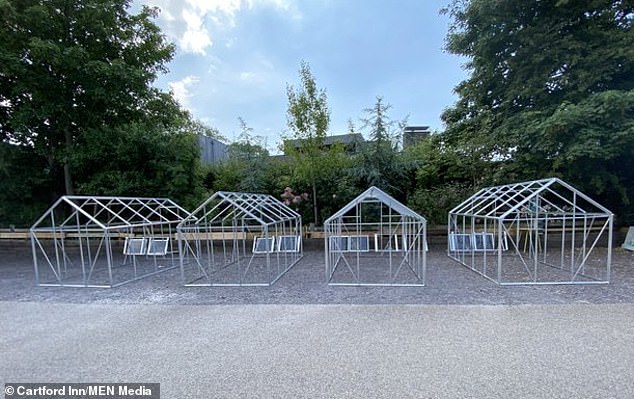 But, in a sign of the risks involved, he will also warn that the changes will be reversed immediately if people abuse the new rules and the epidemic begins to take off again.

What changes is Boris Johnson expected to make today?

Boris Johnson is widely expected to announce a raft of easements to the lockdown restrictions today.

They would come into effect from July 4 – in less than a fortnight.

They are believed to include:

The relaxation on July 4 – Independence Day in the US – comes amid growing optimism that the virus, which has claimed more than 42,000 lives in the UK, is finally reducing to manageable proportions.

The focus of the attempted economic revival will be on activities that can take place outdoors.

But government sources said that some indoor venues, including cinemas, museums and art galleries, will also be allowed to reopen provided they take measures to reduce the risk of spreading coronavirus. 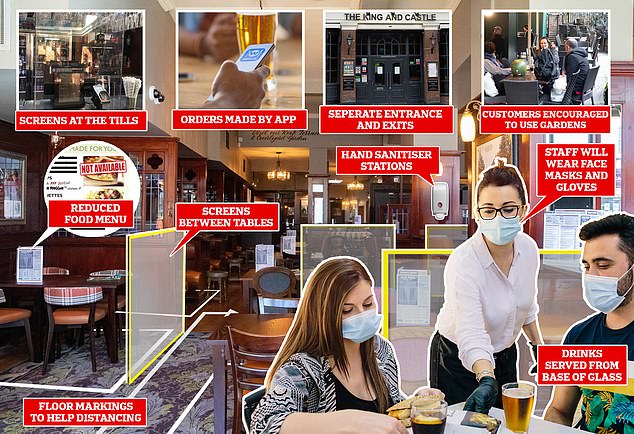 The Government should ‘seize the opportunity to curb drink driving’ by forcing pubs to close off their car parks as lockdown eases, a star road traffic lawyer has urged.

Bars and pubs should be told to seal off their parking facilities and use the space to provide more outdoor seating if they are given the green light to open on 4 July, says Nick Freeman – who has been dubbed ‘Mr Loophole’ for getting a string of celebrities of driving charges.

He said the move would not only help provide extra space for social distancing and increase capacity for businesses to serve more punters, but discourage drinkers from driving to and from the pub.

‘The reopening of bars and pubs is a welcome move for both the public and the economy,’ according to the 63 year-old lawyer. ‘But inevitably there may well be those who – by default or design – get behind the wheel after having one too many. ‘

He added: ‘The closing of pub car parks is a very visible sign that drinking and driving don`t go together.

‘In fact the Government could use this opportunity to launch an anti-drink-drive campaign, citing the fact that pubs are open but car parks are closed.’

A Downing Street source warned: ‘We are only able to move forward this week because the vast majority of people have taken steps to control the virus.

‘But the more we open up, the more important it is that everyone follows the social distancing guidelines.

‘We will not hesitate to reverse these steps if it is necessary to stop the virus running out of control.’

The changes will only apply in England for now.

She said it was ‘very tempting’ to ease restrictions when death rates were falling, but said fresh outbreaks in Germany and China underlined the need for caution.

But Matt Hancock said official data on the epidemic supported the case for relaxing the rules.

The number of new cases fell to 958, the lowest figure since lockdown began on March 23.

The Health Secretary told the daily No 10 briefing last night: ‘A month ago, one in 400 people had the virus; now it is one in 1,700 and we can ease the lockdown.’

Today’s package of measures is expected to produce the biggest single relaxation of the lockdown so far.

One Whitehall source said it was ‘effectively the end of lockdown’ – although large gatherings will remain banned, theatres and nightclubs will have to stay closed, and modified social distancing rules will remain in place. 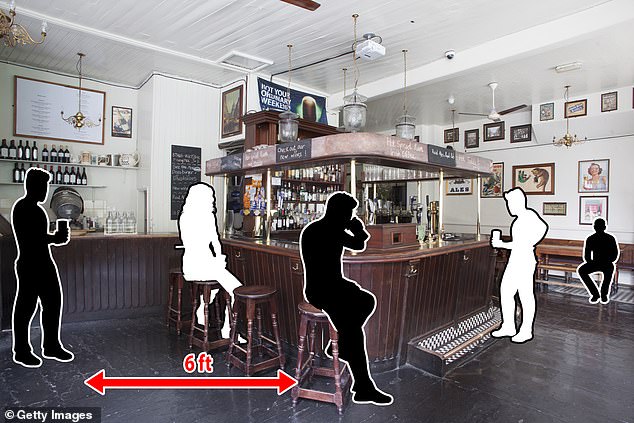 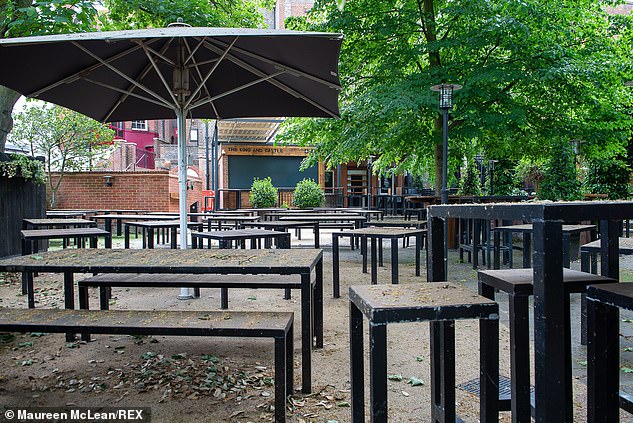 Cinemas will only be able to have customers in every other seat. Museums and galleries will have to operate one-way systems and limit numbers.

Hairdressers will be required to take steps such as wearing personal protective equipment and to cut the small talk to limit the spread of the virus.

The PM is expected to confirm that from July 4 the British tourist industry can reopen, giving millions the hope of a ‘staycation’ in the UK this summer.

Hotels, guesthouses, campsites, caravan parks and self-catering properties will all be permitted to reopen if they act to prevent the spread of the virus. Owners of second homes will also be allowed to visit them again.