Bark off! Pug puppy refuses to share bowl of dog food with his siblings in adorable footage

This is the comical moment a puppy refuses to share a bowl of food with his siblings after tasting kibble for the very first time.

Footage shared by Rachael Hilliker shows her seven-week-old pug Dickens tucking into his very first bowl of kibble at his home in East Lansing, Ingham County, Michigan, when his siblings begin to approach the food.

The dog places his paws in the bowl in an effort to mark his territory and takes a swipe at one of siblings as they try to take a bite.

Seven-week-old  Dickens places his paw in the bowl of kibble and refuses to share with his siblings at their home in East Lansing, Ingham County, Michigan 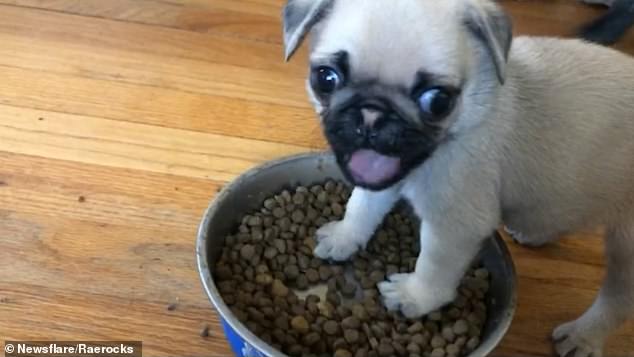 During the clip, which was filmed on February 17, Dickens frantically eats the bowl of food in front of him.

As his siblings approach, the puppy takes a swipe at one of them and places his paws in the kibble as Ms Hilliker tells him: ‘You’ve got to share buddy!’

The canine’s owner laughs at his comical antics and says: ‘Dickens can Bear eat too?’

Just moments later, a second puppy approaches the bowl and Dickens stretches out his paws and pulls the bowl of kibble towards him. 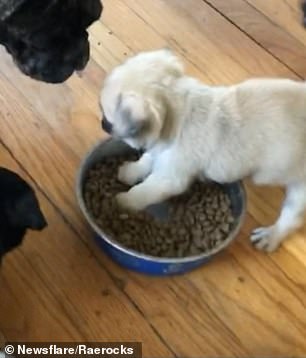 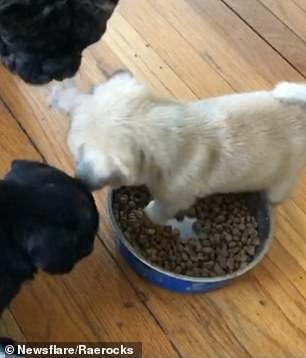 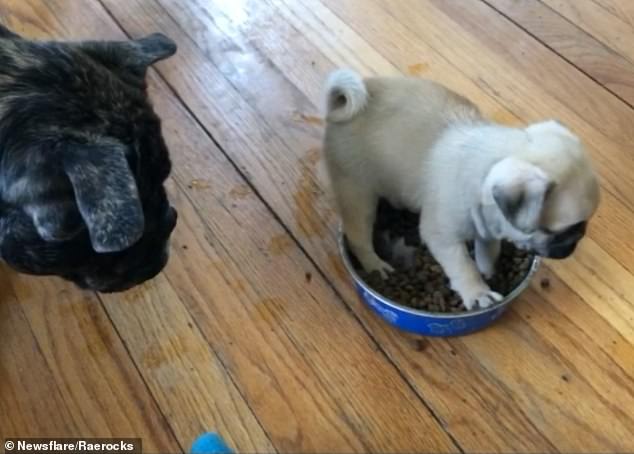 As he continues to guard the bowl, Ms Hilliker tells the dog: ‘Dickens come on you can’t hog the food. Come on let Bear get a bite. Can Bear get some?’

Ms Hilliker, who owns four dogs in total, told Newsflare: ‘He almost died at two-weeks-old and is half the size of his littermate. I guess that’s why he wanted to hog the food when he first tried kibble.’

The comical scenes have since gathered an array of responses from social media users, with one calling Dickens ‘adorable’.

The scenes gathered an array of comical responses from social media users, with one asking Ms Hilliker what kind of dog food she had purchased

One user wrote: ‘Whoah! This stuff is amazing! And it’s all mine! All mine! You get away, this is mine! Get! Get! Get away!

While another added: ‘OMG, he gets in the bowl. Love it.’

Another person asked: ‘What kind of dog food do you buy? I want to buy their stock.’