Pubs have been forced to cancel post-midnight reopening events following a Government announcement that regulations enforcing their closure will remain in place until 6am.

Some landlords – including the pub chain BrewDog – had planned to reopen their venues in England as the clock ticked past midnight.

But several hours before they were due to welcome customers, No 10 said on Friday afternoon the ban would now remain in place until later on Saturday morning.

Pub owners and the Police Federation of England and Wales have since criticised the timing of the announcement.

Meanwhile, many people have taken to twitter to say how excited they are for pubs to reopen on Saturday, with some predicting that they will be packed with drinkers keen to be back at a bar after over three months of lockdown.

Twitter users seem to be expecting an almost festival atmosphere on Saturday, joking that they expect to see large groups of people at pubs when they reopen, with one user sharing a picture of Glastonbury with the caption ‘Weatherspoons Beer Garden, Saturday’.

Another Twitter user shared a photograph from a Leeds supermarket, where a shelf that should have had packets of paracetamol was empty – suggesting people were getting prepared for Sunday hangovers.

Another user shared a picture of them with a drink at home, saying he was ‘stepping up his training’ ahead of Saturday, while others shared gifs and memes, comparing them to what they expect to see as the pubs open, likening the potential scenes to zombies. 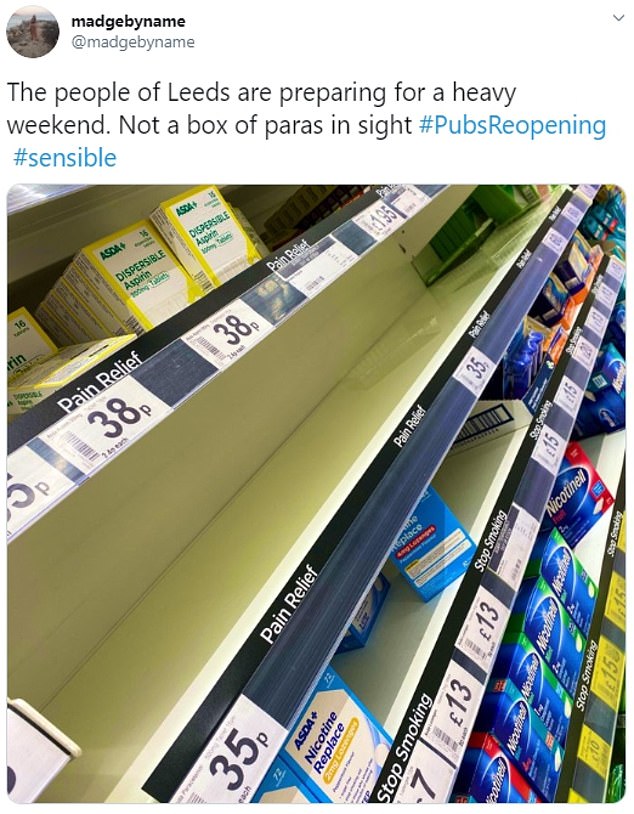 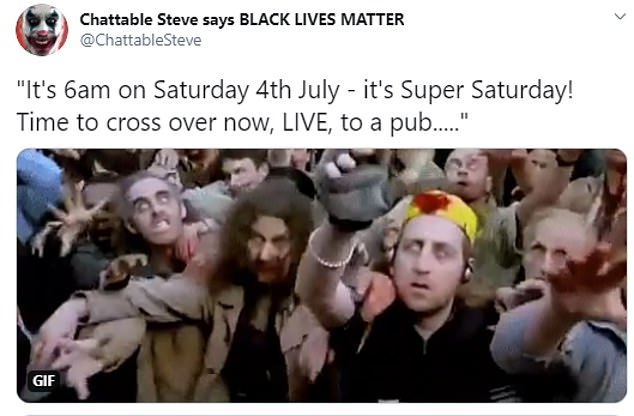 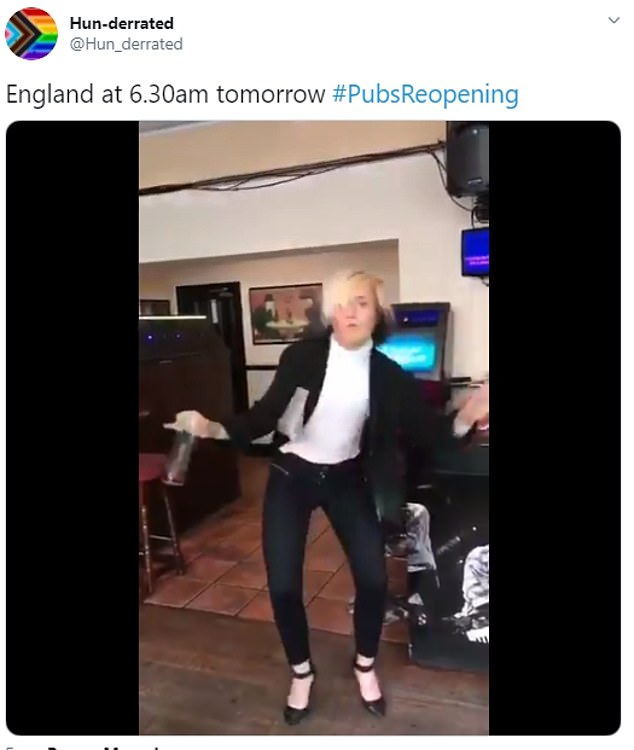 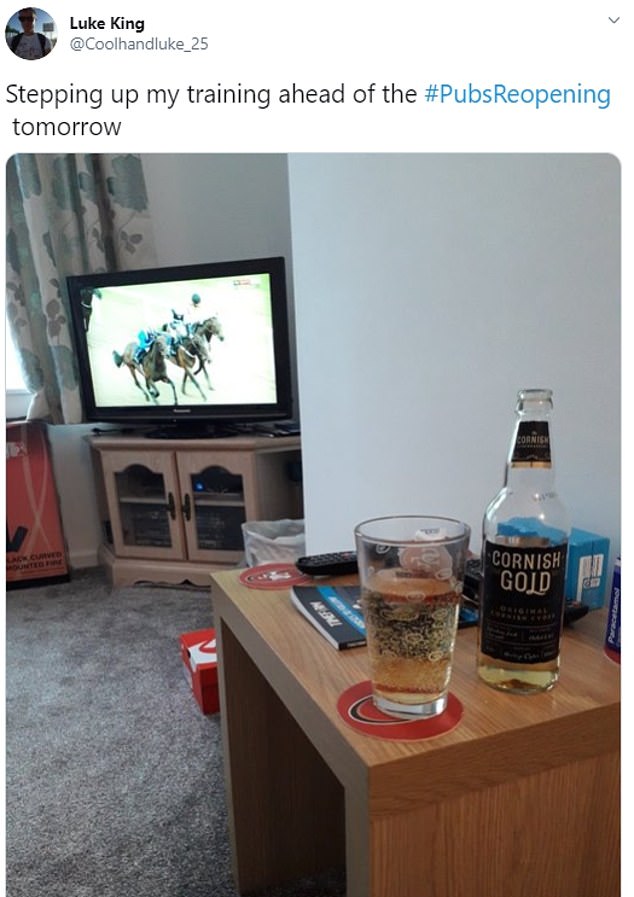 Following the announcement that pubs could not have midnight opening parties, Adam Snowball, managing director of the Showtime sports bar in Huddersfield, said it was ‘massively disappointing’ to have to cancel his reopening event.

The 35-year-old said about 50 people had booked a table at his venue on Zetland Street, which would have remained open until 3.30am.

He told the PA news agency: ‘We only found about the changes this morning when we received a call from Kirklees Council’s licensing department. 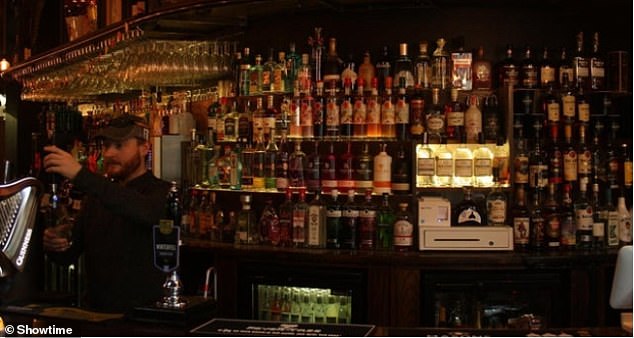 Some pubs, such as the Showtime sports bar is Huddersfield (pictured above with Adam Snowball, the pub’s managing director), have had to cancel their midnight reopening events

‘To be honest, I don’t think the Government had thought about it (pubs reopening at midnight) until it was reported in the media that venues like ours would be.

‘It’s massively disappointing, but it does allow us to step off the gas a little bit.’

Mr Snowball said customers were being notified that the bar would not be open until 10am on Saturday. 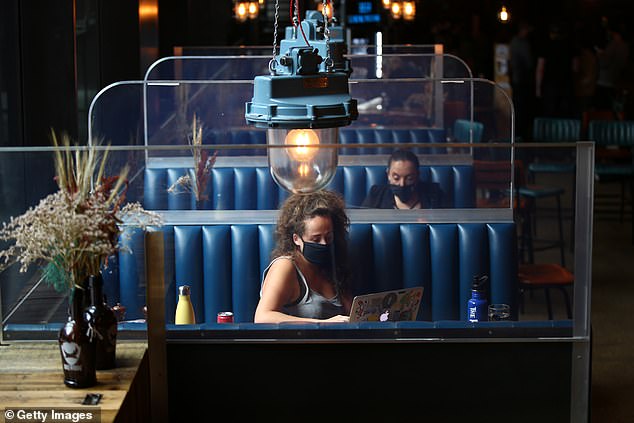 Pubs planning to open at midnight have now have to cancel their plans after the government announced they will have to remain closed until 6 am on Saturday, or until when their license allows them. Above: Staff at BrewDog in London prepare to reopen tomorrow, with tables separated with perspex to limit the potential spread of coronavirus

Meanwhile, a BrewDog spokeswoman said the chain had also been required to tell customers that its planned ticket-only events in Manchester, Newcastle and Shoreditch would no longer be going ahead.

John Apter, national chairman of the Police Federation of England and Wales, said while he welcomed the decision to keep pubs shut until 6am, the timing of the announcement was ‘very unhelpful’.

He said: ‘I think the lastminute.com approach to this is very unhelpful to policing and adds even more pressure to what is an already difficult situation.’

Mr Apter said the federation, which represents thousands of rank and file officers, had ‘raised concerns’ about some pubs planning to open after midnight. 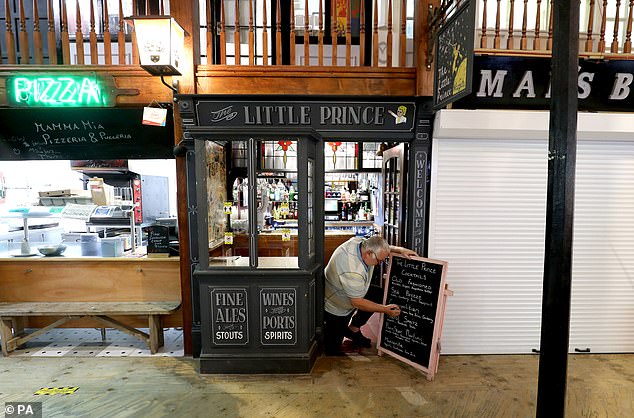 Some pubs have had to notify their customers that they will not be opening at midnight, and have had to cancelled bookings. Above, Mark Breen, manager of The Little Prince in Margate, Kent, the smallest pub in England, prepares to reopen to the public on Saturday 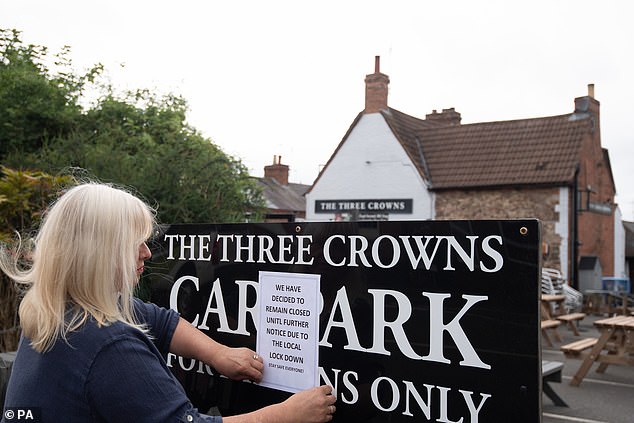 Some pubs in areas such as Leicestershire have chosen not to reopen tomorrow. Above, Landlady Carole Burton at The Three Crowns in Barrow upon Soar, in northern Leicestershire, puts up a sign saying they will not be opening due to the local lockdown

He said: ‘It is a good thing the Home Office has acted and has made the right decision keep pub doors firmly shut until 6am.

‘I would urge the public to be responsible, sensible, and mindful of the restrictions that are still in place.’

The British Beer and Pubs Association has urged people to follow hygiene measures that will in place at pubs and to be respectful and supportive of landlords and staff working in pubs and bars.

‘If we all work together we can ensure that the reopening of pubs and hospitality is a success and an enjoyable experience for everyone,’ the association said.

While regulations allowing for the reopening of pubs and bars comes into force from 6am, licensing conditions will still apply, and therefore pubs will only be able to open when their license allows. 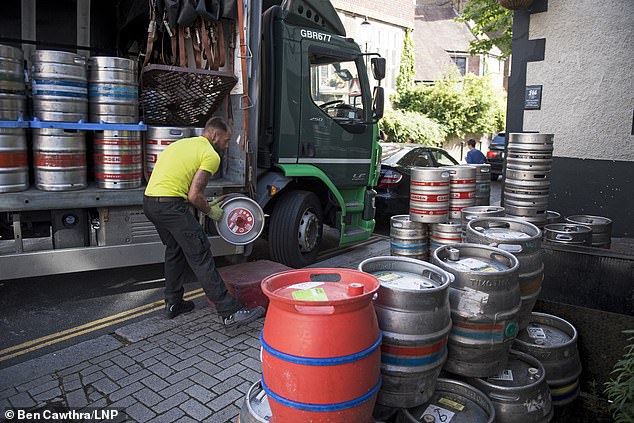 Beer barrels arrive at the Windsor Castle pub in South Kensington ahead of pubs reopening tomorrow. The government is waiting anxiously to see how people react to a further relaxation of lockdown rules 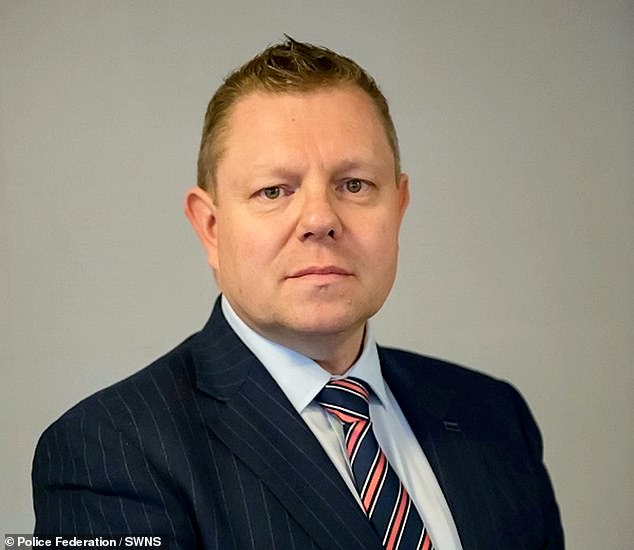 John Apter, national chairman of the Police Federation of England and Wales (picture above) has urged the public to be responsible as they return to the pubs on Saturday

England has around 35,000 pubs and small bars, which have been closed since March 20.

The majority of them will be opening for the first time since being shuttered on what is being dubbed ‘Super Saturday’, after Boris Johnson announced easing of lockdown measures last week – including the reduction of the two meter rule to ‘one meter plus.’

‘I hope people will do this safely and sensibly… My message is let’s not blow it now folks’, Johnson said during an interview with LBC Radio, and suggested that it wouldn’t make much difference to wait until Monday to open pubs and bars.

Meanwhile, a stark warning of the danger pubs present in spreading coronavirus has been issued by the top scientists advising the Government on the eve of their reopening in England.

Chief medical officer Professor Chris Whitty said the coronavirus pandemic ‘is a long way from gone’ as he urged the public to follow social-distancing rules when the lockdown is eased on Saturday.

Sir Patrick Vallance, the chief scientific adviser, also warned of the danger of ‘superspreading’ of Covid-19 occurring in pubs. 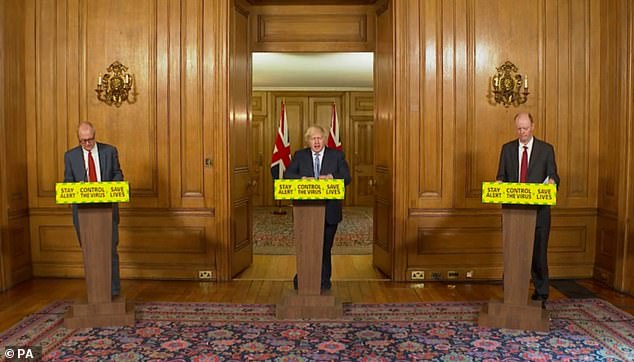 Stood between them at the Downing Street press conference, Boris Johnson urged the public to ‘enjoy summer safely’ so the ailing economy can be boosted without causing the virus to spread uncontrollably.

Professor Whitty added: ‘None of us believe, and I’m sure nobody watching this believes, this is a risk-free next step. It is absolutely not, that is why we have to be really serious about it.

‘There’s no doubt these are environments whose principal job it is to bring people together, that’s a great thing to do socially but it’s also a great thing from the virus’s point of view.

‘And therefore we do have to have a really clear and really disciplined approach to try and maintain social distancing whilst also enjoying pubs.’