Pubs and restaurants will reportedly be able to serve customers food and alcohol outside from April as ministers continue to plan Britain’s route out of lockdown.

The reopening of hospitality is being accelerated in an attempt to boost the struggling sector, a government insider told the Sun.

Hospitality had previously been expected to reopen in May, with the possibility of the return of takeaway pints in April.

This has reportedly now been fast-tracked, but the ‘rule of six’ and social distancing will remain in place throughout the summer as a compromise for the return of pubs and restaurants.

It was said the reopening of hospitality could only take place if coronavirus cases continue to fall at the current rate.

A Downing Street source said: ‘We will hopefully be sipping pints in the spring sunshine sooner rather than later.’

Pubs and restaurants will reportedly be able to serve customers food and alcohol outside from April as ministers continue to plan Britain’s route out of lockdown. Pictured: Stock image 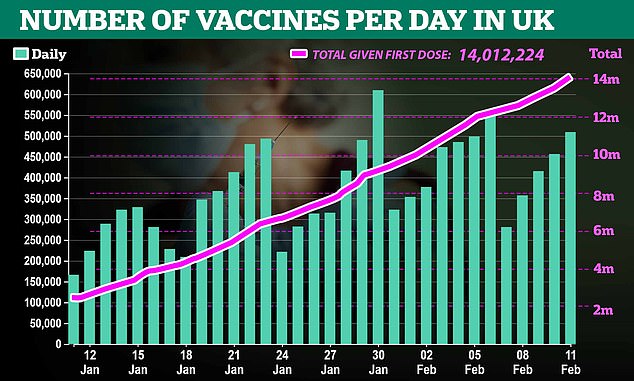 The reopening of limited indoor mixing in pubs and restaurants is still expected in May, it was reported.

It comes as it was suggested the number of coronavirus patients in England will more than halve over the next month, according to internal government projections seen by The Times.

Admissions and deaths in British hospitals are predicted to fall to October levels, it was said, as the infection rates are falling faster than expected ahead of the planned reopening of schools on March 8.

The UK’s R rate – the coronavirus reproduction number – yesterday fell below one for the first time since July as Britain begins to battle its way out of the pandemic.

The figure is now between 0.7 and 0.9, according to the latest estimate, and is below one in every region of the UK.

Covid cases and deaths are also continuing to plummet across Britain, official data revealed on Friday. Department of Health bosses declared another 15,144 cases, down 21 per cent in a week. 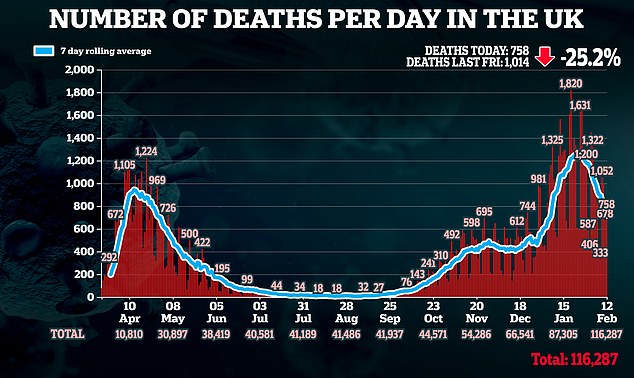 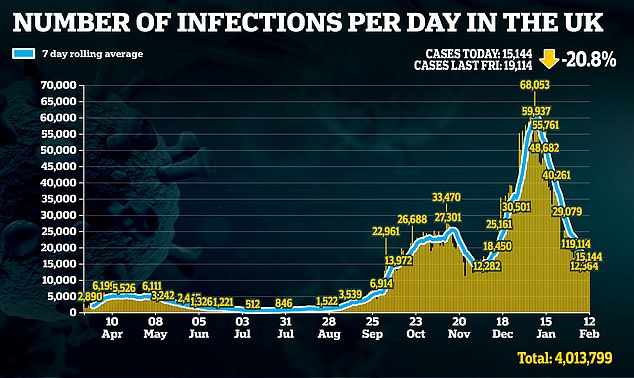 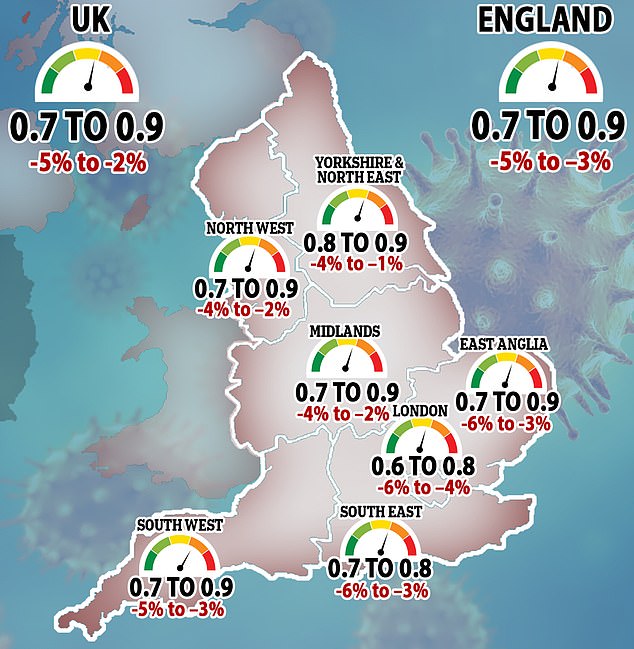 It means 4million Britons have tested positive since the pandemic began — but the true toll is millions more.

Another 758 fatalities were also added to the official toll, with the figure having fallen by a quarter on last Friday.

And in yet another glimmer of hope that the UK could be freed from draconian restrictions soon, the NHS is on course to reach its target of vaccinating 15million Britons tomorrow.

In a major step forward in the battle against coronavirus, 14,012,224 first doses of the Pfizer and Oxford jabs have been administered.

The total includes more than 500,000 from Thursday, meaning the 15million target should be hit today – 48 hours ahead of schedule.

The focus has been on the top four priority groups: the over-70s, care home residents, healthcare workers and people shielding. 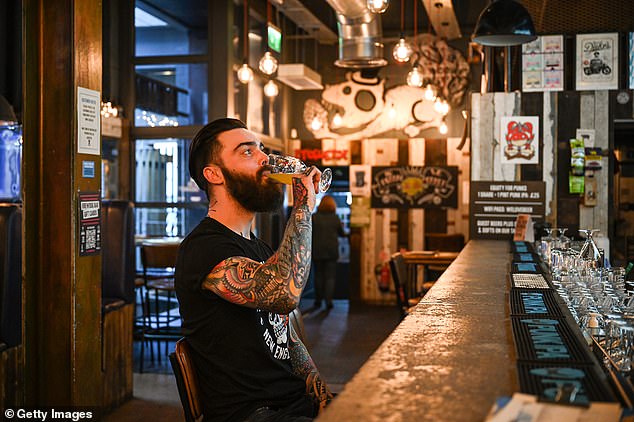 Hospitality had previously been expected to reopen in May, with the possibility of the return of takeaway pints in April. Pictured: Stock image

But it emerged yesterday that the vaccination programme is so advanced in some areas that over-50s are being offered jabs.

It comes as hopes that families will be reunited at Easter suffered a blow last night as government scientists demanded a cautious route out of lockdown.

Advisers are urging the Prime Minister to keep the brakes on for at least another two months.

Boris Johnson is determined to start reopening schools on March 8 but it could be several weeks before other restrictions begin to be lifted.

It means holiday plans for the period around Easter, which falls on April 4 this year, may still be ruined.

A government source yesterday said it was ‘too early’ to think about holidays, which will not be possible until infection numbers are at much lower levels. 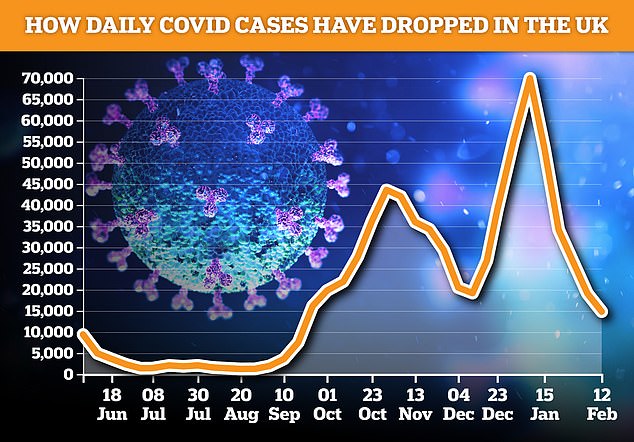 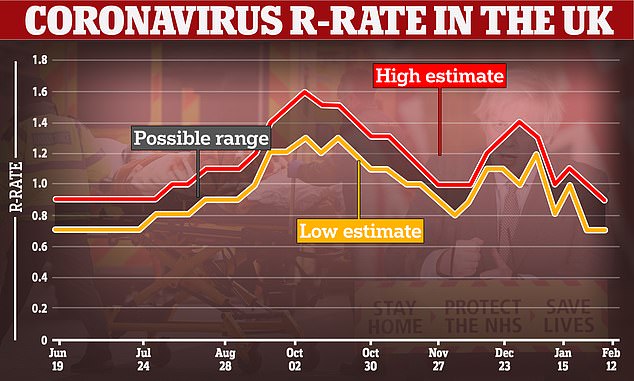 Despite the pessimism in Westminster, Welsh First Minister Mark Drakeford said he hoped it might be possible to allow holidays in Wales. 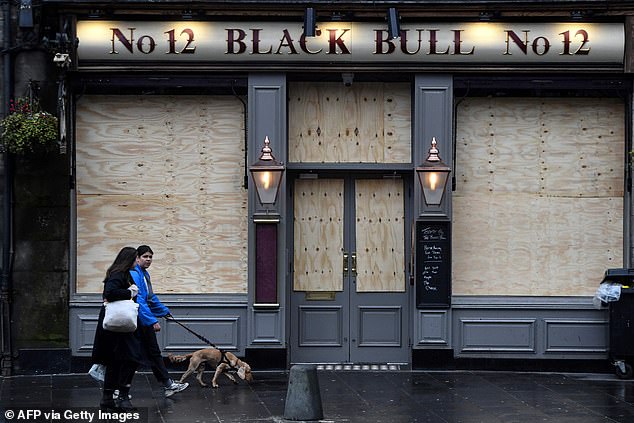 Covid cases and deaths are also continuing to plummet across Britain, official data revealed on Friday. Department of Health bosses declared another 15,144 cases, down 21 per cent in a week. Pictured: Stock image 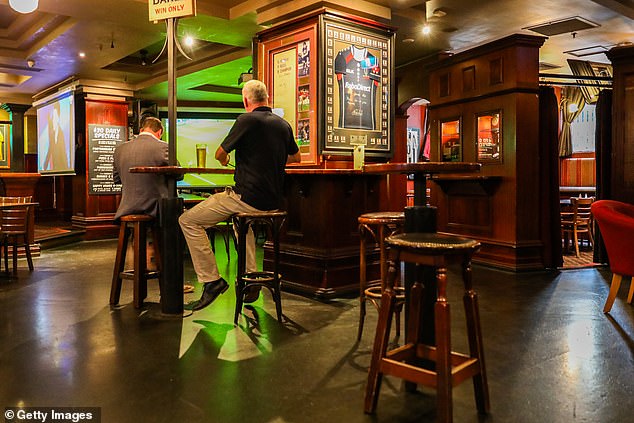 The reopening of limited indoor mixing in pubs and restaurants is still expected in May, it was reported. Pictured: Stock image

Mr Johnson will publish a detailed roadmap on February 22 setting out his plan for lifting the lockdown.

It is expected to begin with the reopening of at least some schools next month, with primaries likely to be prioritised.

Outdoor exercise rules could also be eased at this stage.

Nottinghamshire, Hampshire and other parts of England are ALREADY vaccinating over-65s against Covid

NHS bosses today confirmed the Covid vaccine roll-out can be expanded to all over-65s in regions of England winning the race — even though some parts of the nation have already moved on to the next vulnerable group.

Regions can move on to the next cohort immediately, if every effort has been made to get hold of everyone in groups one to four — the over-70s, NHS workers, care home residents and staff, and seriously ill adults, NHS England said.

The move opens the door for up to 3million vulnerable adults to get vaccinated.

Parts of England including Nottinghamshire, Shropshire, Hampshire and Coventry have all began vaccinating over-65s. There are also reports of sixty-somethings receiving their first doses in London and Manchester.

In Wales, First Minister Mark Drakeford said some over-50s there have already begun to be contacted and offered a vaccination after the top groups were reached.

And in Northern Ireland, people aged 65-69 have been able to book a Covid-19 vaccine at seven regional centres since the end of January. Scotland expects to move to the next groups by the middle of the month.

Scotland’s First Minister Nicola Sturgeon has said she expects many in the 65-69 age group to have had their first vaccine by the middle of this month.

It comes as it was revealed today that teachers and police officers could start getting vaccines by April, with them expected to be first in line once the over-50s have been jabbed.

Britain is on course to have offered first doses to all 15million in the top four priority groups — over-70s, care home residents and staff, NHS workers, and the seriously ill — by next Monday. But ministers accept they will never be able to achieve 100 per cent uptake, prompting them to issue a last-ditch plea for almost 2million Britons in the most at-risk groups to come forward.

The roll-out will be expanded to 65 to 69-year-olds, before working down the age groups until as many vulnerable Britons are covered as possible. No10 hopes to have offered jabs to all 32million in the top nine priority groups by the end of April.