Public’s immunity from coronavirus could be twice as high as first believed with a THIRD of people likely not to catch it, research finds

Levels of public immunity from coronavirus could be twice as high as first believed after new research looked into the way our bodies fight against the disease.

It could mean that a third of healthy people who do not show any symptoms of Covid-19 may have developed a level of immunity, and built-up areas such as London could be further along the path to herd immunity than first thought.

However, the evidence of immunity does not come from the basic antibodies that scientists have been talking about.

Attempts to measure immunity in the public have mostly proven unreliable until now, because of the focus on antibodies.

Levels of public immunity from coronavirus could be twice as high as first believed after new research looked into the way our bodies fight against the disease, researchers have found

But a new study by Karolinska Institutet in Sweden, the only European country not to enter lockdown, claims to have data that suggests immunity levels are twice as high as current estimates, according to The Telegraph.

As well as looking at antibodies, the researchers examined levels of T-cells, a type of white blood cell that helps the immune system fight off viruses.

Data shows that 30 per cent of the healthy blood donors studied were found to have developed ‘T-cell immunity’ – double those found with antibodies.

However, it is not known what level of immunity is given by a T-cell response, although antibodies are believed to only last from three to six months. 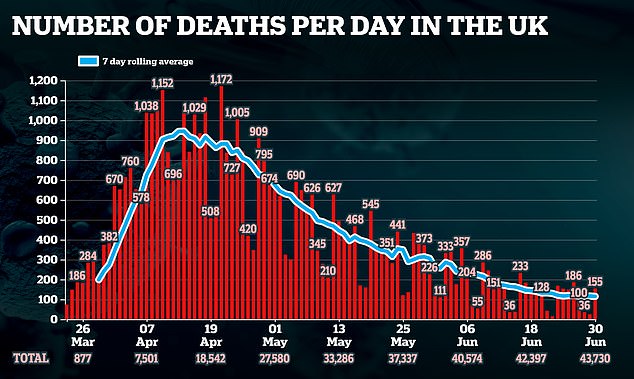 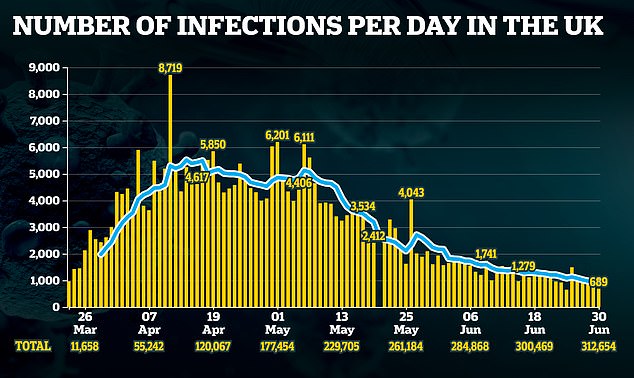 The development comes as Government data shows the number of daily fatalities has dropped 10 per cent in a week.

At one point early on in the pandemic, the Government was considering a policy of herd immunity, requiring 60 per cent of the population to get infected, but this was dropped on projections that the resulting outbreak would overwhelm the NHS and cause hundreds of thousands of deaths.

Immunity sampling across the country suggests around 7 per cent of people in England have developed antibodies, rising to 17 per cent in London, but this may be higher because of T-cells. 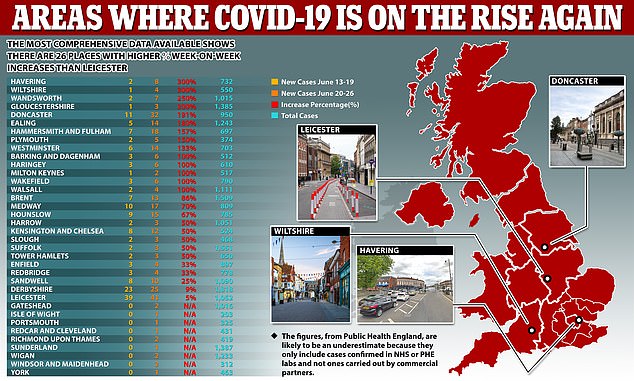 Data compiled by Public Health England (PHE) shows Havering and Wiltshire have seen the biggest week-on-week increases in confirmed Covid-19 infections (300 per cent). In comparison, Leicester has recorded a 5 per cent jump in cases – going from 39 cases registered between June 13-19 to 41 in the following seven-day spell

But scientists are increasingly excited about the role played by T-cells, as they believe it may explain why some groups – in particular children – appear to be more immune.

Marcus Buggert, an assistant professor at Karolinska Institutet said: ‘What this means is we are probably underestimating the number of people that have some type of immunity.

‘If it means that these individuals are totally protected, or if they’re going to get a milder or asymptomatic disease in the future, it’s hard to say.’

Sweden has itself suffered as a result of not implementing lockdown restrictions unlike almost every country across the world, with politicians now saying they were wrong to allow life to continue as normal.

Data on Britain’s pandemic released yesterday revealed the number of people dying each week in England and Wales has dropped below average for the first time since the coronavirus crisis spiralled out of control.

Data released by the Office for National Statistics (ONS) today showed 9,339 people died of any cause in the week ending June 19 — down from an average of 9,404 for the same week over the past five years.

Professor Carl Heneghan, director of Oxford University’s Centre for Evidence-Based Medicine, said: ‘It means we are at the end of the first wave of excess deaths and we are now back to normal.’