A Merseyside pub has been cheekily renamed in an act of defiance towards the Government’s new lockdown restrictions in the area.

The James Atherton in New Brighton, the Wirral, has renamed itself ‘The Three Bellends’ – with a sign featuring the faces of Prime Minister Boris Johnson, his close adviser Dominic Cummings and Health Secretary Matt Hancock.

The sign appears as pubs were forced to close in the Liverpool area on Wednesday as part of the Government’s new three-tier system of coronavirus restrictions for England.

Owner Daniel Davies, pictured changed the name of his pub from the James Atherton to the Three Bellends featuring Boris Johnson, Dominic Cummings and Matt Hancock 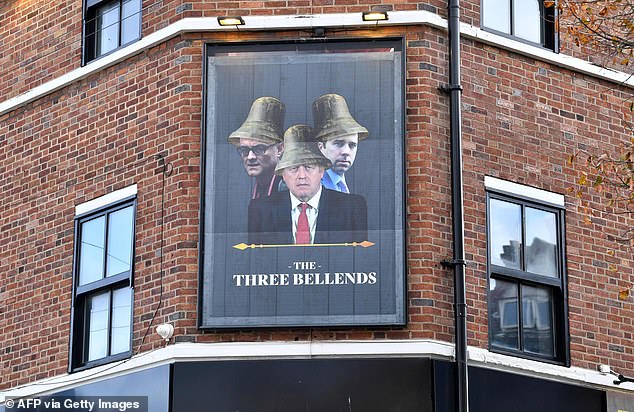 The PM, his special adviser and the health secretary are shown wearing a bell on their heads 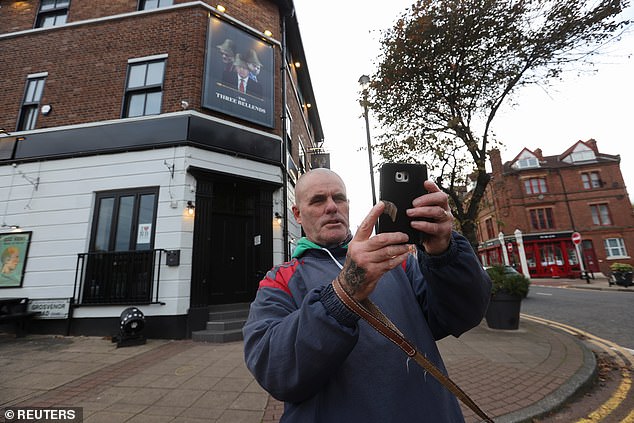 Mori Sert, who lives around the corner from the pub, said: ‘I think this response defines the North in a nutshell.

‘No matter what hits us, we’ll never lose our spirit and humour.’

The 26-year-old said the pub’s new look has caused ‘a real buzz’ in the area, with people flocking to it to take pictures of its new sign.

Ms Sert works in retail in the Liverpool ONE shopping complex and voiced concern over the damage the new lockdown measures could cause for local businesses.

‘Since Monday there has already been a dramatic decrease in footfall in Liverpool city,’ she said.

‘We are all very worried for our local businesses, especially hospitality places that are now being forced to close.

‘It’s a struggle and we are all worried about how our much-loved city is going to bounce back from this.

‘We will keep fighting this chaos as best we can.’

‘The government has unequivocally blamed our sector for being fundamental in the spreading of Covid-19, despite there being overwhelming evidence to prove otherwise.

‘Our business has been decimated and their lack of action has compounded the problem.

‘Westminster’s further decision to pick and choose which types of venue may open, based on those serving meals for example, is mind-boggling.’ 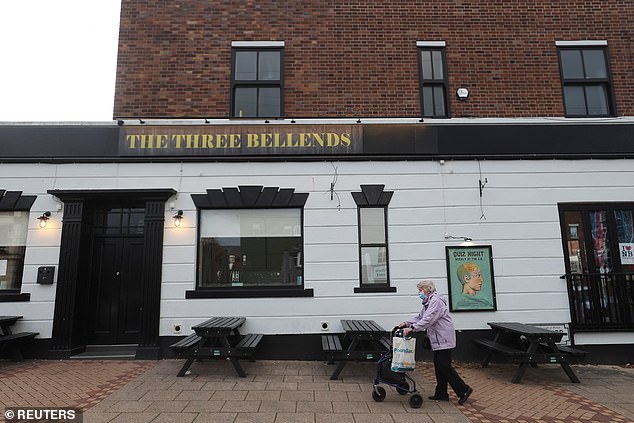 He added: ‘Whilst the renaming of the pub is clearly tongue in cheek, as far as I’m concerned the gloves are off and ministers need to understand the gravity of the perilous situation they have placed us in.

‘This is a town that finally feels like it’s on the up and we need funding immediately to protect our businesses and support our staff.

‘Yet again it feels as though Liverpool and its environs have been singled out. Winter is around the corner and we need tangible actions and solutions by those in power – now.’

The pub opened in April 2018 as part of a wider privately-funded regeneration scheme by local company Rockpoint Leisure.

The company has bought up derelict properties, and introduced independent hospitality and retail concepts as well as commissioning and funding more than 20 large-scale artworks by national and international street artists.’