‘While it may be controversial, I think MDMA-assisted psychotherapy is a real possibility for helping traumatised veterans,’ Sir Nick said in February.

MDMA was first synthesised in 1912 by the pharmaceutical giant Merck to use in the production of other drugs. But it was expensive, and drug-company interest fizzled out in the 1950s.

Then, in the 1960s, hippies discovered it would get them high. It became illegal under the Misuse of Drugs Act in 1977 and is a Class A substance: being caught in possession of it can lead to up to seven years in prison.

But MDMA may soon become respectable. Psychiatrists at King’s College London are set to begin trialling it this year on former servicemen suffering with post-traumatic stress.

MDMA was first synthesised in 1912 by the pharmaceutical giant Merck to use in the production of other drugs. But it was expensive, and drug-company interest fizzled out in the 1950s. Then, in the 1960s, hippies discovered it would get them high

It has been suggested that the £1.5 million research project — its finanical backers include NHS England — could secure approval for clinical use from UK regulators as early as 2024.

British therapists are investigating the use of other hallucinogenic drugs, too, including magic mushrooms and ketamine (a horse tranquilliser) for depression.

So should we change our view about mind-altering psychedelic substances? Or ought we instead to be alarmed at the prospect of psychiatrists adding more brain-changing substances to their armoury, with the danger of these, too, becoming overused (and misused) in a similar way to pills such as antidepressants and benzodiazepine sedatives?

Experts predict MDMA will be the first of these psychedelic substances to soon win approval from UK regulators. It is already being trialled for severe PTSD in the U.S., Canada, Israel and Switzerland.

Study participants take the drug in the company of a therapist in three eight-hour sessions, spaced one month apart. The patient also has regular 90-minute sessions of psychotherapy.

The international studies are being co-ordinated by the Multidisciplinary Association for Psychedelic Studies, a California-based non-profit research organisation that ‘develops medical, legal and cultural contexts for people to benefit from the careful uses of psychedelics and marijuana’.

Rick Doblin, a public policy expert and the organisation’s founder and executive director, says MDMA is a catalyst for making psychotherapy work.

‘It’s not the drug doing the therapeutic work, it’s the psychotherapy,’ he explains. ‘The drug just makes therapy more effective, reducing patients’ fear-based responses to traumatic memories. It gives them a sense of safety.’

He says that evidence from trials following patients a year after therapy ‘shows that people keep getting better — they have learnt that they can process the overwhelming emotions on their own without the drug’.

Yet the drug advice charity Frank warns that MDMA has also been linked to liver, kidney and heart problems, with evidence that long-term users may suffer from memory problems and — ironically — may develop depression and anxiety.

Rick Doblin stresses: ‘Every time you take MDMA you should be concerned about the risks. Every drug has risks, and the therapeutic context is the best way to manage the risks and get the therapeutic benefits.’ 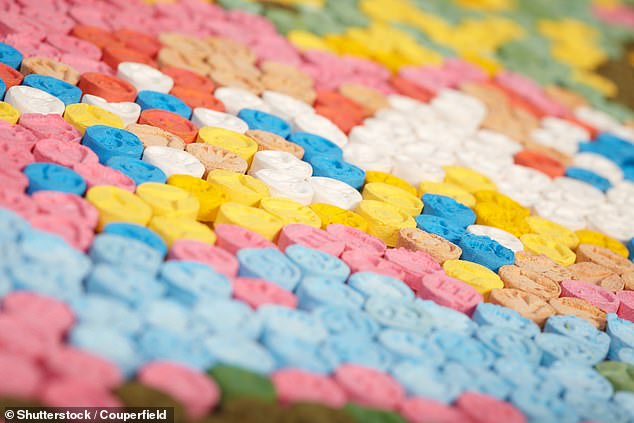 Experts predict MDMA will be the first of these psychedelic substances to soon win approval from UK regulators. It is already being trialled for severe PTSD in the U.S., Canada, Israel and Switzerland

The first NHS trials using the drug for PTSD will be early-stage safety tests, scheduled for the end of this year at King’s College London — with advanced clinical trials of its effectiveness expected in 2023.

Scientific interest in psychedelic drugs’ therapeutic potential has spiralled in recent years. In 2004, only eight studies with the keywords ‘psychedelic’ and ‘mental health’ were published in reputable scientific journals; last year that annual figure had leapt to 168, according to the U.S. National Library of Medicine.

At Harvard Medical School in the U.S. they are establishing a Centre for the Neuroscience of Psychedelics. Its stated mission: ‘To understand how psychedelics enhance the brain’s capacity for change and to optimise current treatments and create new treatments for mental illness.’

This comes half a century after Harvard sacked the psychologist Timothy Leary — famed for his phrase ‘turn on, tune in, drop out’ — for promoting mind-altering drugs such as LSD.

Why all the new interest? David Nutt, a professor of neuropsychopharmacology at Imperial College London, says there is a dearth of potential new medications for mental illness. (Professor Nutt himself has a controversial history in this area — as chair of the Advisory Council on the Misuse of Drugs, he was the government’s top drugs adviser but was sacked in 2009 after saying ecstasy and LSD were less dangerous than alcohol.)

‘Big Pharma has stopped developing new antidepressants,’ he says. ‘[Existing drugs] aren’t bad at treating many people and cost only 10p a day per patient. It would be impossible to persuade health services to purchase a much more expensive drug that wasn’t that much better.’

Professor Nutt says that a wave of commercial interest in psychedelic drugs has been sparked by a study he co-authored, published in The Lancet Psychiatry in 2016, where 12 patients with treatment-resistant depression were given psychotherapy in combination with psilocybin — a psychedelic compound produced by more than 200 species of fungi, including magic mushrooms. ‘These patients had previously failed to respond to antidepressants combined with psychotherapy,’ he says. ‘But psilocybin halved their depression scores overnight.

‘Our brain-imaging scans showed that psilocybin affects brain areas associated with depression, in particular a system called the default mode network. This gives you your sense of self.

‘In depression this network is overactive — it makes depressed people ruminate and get stuck in cycles of negative thoughts.’

Professor Nutt believes that psychedelic drugs disrupt this network. ‘They change the way people think and can help them to get insights into why they are depressed,’ he says. ‘Patients can reflect on things positively. Psychedelics help people to feel more in tune with the world and with other people. They feel more connected, whereas depressed people feel isolated and disconnected.’

There are, however, concerns that the kind of brain scans used for these studies — functional MRI — especially with very small numbers of patients, produce results that are unreliable.

Furthermore, mushrooms, like other psychedelics, can have traumatic effects. The charity Frank warns they can make people have a ‘bad trip’ and subsequently experience sudden scary flashbacks to previous ‘trips’.

Professor Nutt believes, however, that psychedelics can be eminently safe, saying: ‘We have studied 200 patients dosed with psilocybin and we have not found any enduring problems. In a medical setting, adverse effects are rare.’

Sensing the lucrative potential for such therapies, some 50 commercial companies worldwide are developing psychedelic treatments. Professor Nutt is employed as the chief research officer of one — Awakn Life Sciences, which has clinics in Bristol and London. It is developing therapies using ketamine to treat addictions, eating disorders and anxiety disorders. Ketamine is used clinically as an anaesthetic, sedative and painkiller. It is also taken as an illegal psychedelic drug.

‘Ketamine induces a psychedelic state that allows people to escape themselves and gain new insights into their thoughts and behaviours,’ says Professor Nutt.

Yet in January an Exeter University trial of ketamine doses coupled with mindfulness-based therapy for alcoholism failed to prevent patients relapsing any better than patients given only a placebo alongside the psychotherapy.

Among even some leading scientific enthusiasts, there remain doubts. Stephen Ross, a professor of psychiatry at New York University, who has pioneered using psilocybin for patients with depression, warned the American Psychiatric Association’s annual conference last year that a study by Imperial College London has shown psilocybin to be no better at treating depression than the standard antidepressant escitalopram.

Professor Ross says the results ‘threw a dose of cold water on the exuberance in our field. We are in an exciting time but it’s important to remember the history [of psychedelics being misused] and proceed cautiously.’

Infertile men may be twice as likely to develop breast cancer than those without fertility problems, say scientists at The Institute of Cancer Research, London, after they undertook one of the largest studies into male breast cancer. Writing in the journal Breast Cancer Research, they suggested one potential link is hormonal (due to testosterone or oestrogen exposure).

to legalise psilocybin and MDMA. It said that while MDMA might be safe under the stringent conditions of drug trials, were access to it to be increased, there would be ‘an increased risk of misuse’.

The regulator also warned psilocybin ‘poses a high danger for both acute and long-term effects and that while findings from clinical trials . . . are promising, evidence is still emerging and the therapeutic value of psilocybin has not been established’.

John Read, a professor of clinical psychology at the University of East London, told Good Health: ‘Psychiatry has a habit of seeing every latest new drug as the magic answer to patients’ problems, even though all the previous “latest new drugs” haven’t fulfilled that promise.

‘This sort of development frankly leaves me wondering what drug psychiatry will rule in as the next magic bullet. Heroin perhaps?’

Gilly Norton, chief executive of Supporting Wounded Veterans, understands the fears around using MDMA for PTSD. ‘But I have read the clinical data, which shows it can effectively treat people who’ve previously done ten years of therapy with very few visible gains.’

Professor Nutt, meanwhile, would like to change one crucial thing about psychedelic therapy — its name.

‘Psychedelic is a term that has a lot of unfortunate connotations,’ he says. ‘I prefer to just call these drugs “circuit disruptors”.’

Given the current controversies over scientific evidence and clinical practice, rehabilitating these psychoactive substances may require more than just a change of name.