Leaders of a protest movement sought Wednesday to distance themselves from a day of violence when thousands of farmers stormed India’s historic Red Fort, the most dramatic moment in two months of demonstrations that have grown into a major challenge of Prime Minister Narendra Modi’s government.

Farmers demanding the repeal of new agricultural laws briefly took over of the 17th-century fort, and images broadcast live on television shocked the nation. In a particularly bold rebuke to Modi’s Hindu-nationalist government, the protesters hoisted a Sikh religious flag.

At least one protester died, and several demonstrators were injured, as were more than 300 police officers, and there are concerns the violence could undermine the protest movement that has thus far been largely peaceful and is growing in strength.

The farmers — many of them Sikhs from the major agricultural states of Punjab and Haryana — are demanding the repeal of new laws that they fear will favour large corporate agriculture and leave smallholders behind. The government insists the laws will benefit farmers and boost production through private investment, but, in the face of protests, it has offered to suspend them for 18 months. The farmers want nothing less than a full repeal.

On Tuesday, more than 10,000 tractors and thousands more people on foot or horseback moved into the capital, shoving aside barricades and buses blocking their path and at times met by police using tear gas and water cannons.

“The situation is normal now. The protesters have left the streets of the capital,” New Delhi police officer Anto Alphonse said Wednesday morning.

Hundreds of police are now guarding the fort, while the farmers have returned to their camp at the edge of the capital, where they have hunkered down since November, when they last tried to march into New Delhi. Unfazed by the winter cold and frequent rains, they have said they will stay until the farm laws are repealed.

The protesting farmers’ groups are scheduled to meet later Wednesday to discuss the future course of action. Another march is planned for Feb. 1, when the Modi government is scheduled to present the annual budget in Parliament.

As the protests have gathered strength, they have rattled the government like never before since they form the most influential voting bloc in India and are also crucial to its economy. But political analyst Arti Jerath said Tuesday’s violence could dampen their power.

“The Supreme Court has all along said the farmers can continue with the protest without disrupting the life in New Delhi,” she said. “Tuesday’s development has given the government a handle to go to the top court and say, ‘See?’ This is precisely what it was fearing, that it would turn violent.”

Cracks appeared Wednesday in the protest movement when a former convener of the farmers’ umbrella organization disassociated himself from the group after Tuesday’s violent clashes.

V.M. Singh said he was ready to hold talks with the government on legislation guaranteeing a minimum support price for wheat and rice. He said he is no longer seeking the repeal of the three new laws.

Protest organizer Samyukt Kisan Morcha, or United Farmers’ Front, sought to distance the movement from the violence, accusing two outside groups of sabotage by infiltrating their movement. 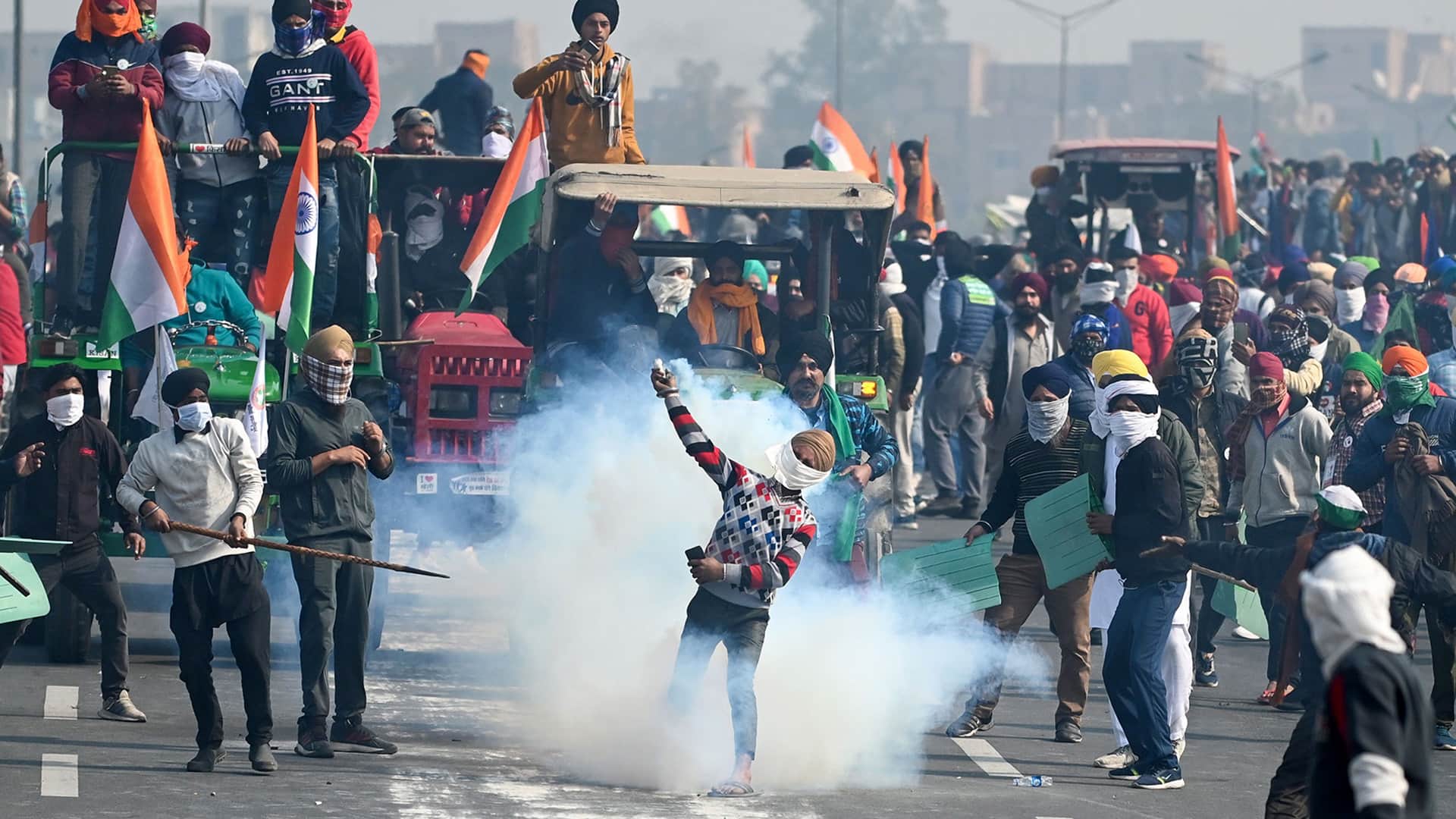 Months-long protests in India escalated on Tuesday as thousands of farmers clashed with police in New Delhi over new laws that they say will push small farmers out of the market and let private corporations exploit them. 1:47

“Even if it was a sabotage, we can’t escape responsibility,” said Yogendra Yadav, another protest leader.

Yadav said frustration had built up among the protesting farmers and asked: “How do you control it if the government is not serious about what they have been demanding for two months?”