A guillotine has been set up by protesters outside the Washington DC home of Amazon CEO Jeff Bezos demanding the company he founded be abolished.

A number of videos have been posted to social media that shows an old fashioned piece of apparatus commonly used for beheading during the French Revolution.

A sign placed underneath read: ‘Support our poor communities. Not our wealthy men.’

The prop was erected on Sunday afternoon and an invite posted to social media for people to attend at the home near Dupont Circle.

Activists set up a guillotine outside of Amazon CEO Jeff Bezos’s D.C. home 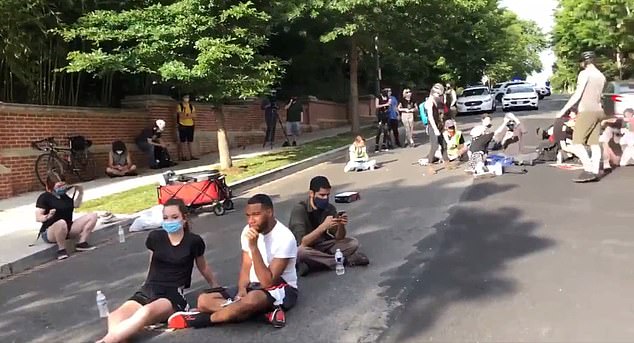 Videos posted to Twitter show protesters standing next to a guillotine 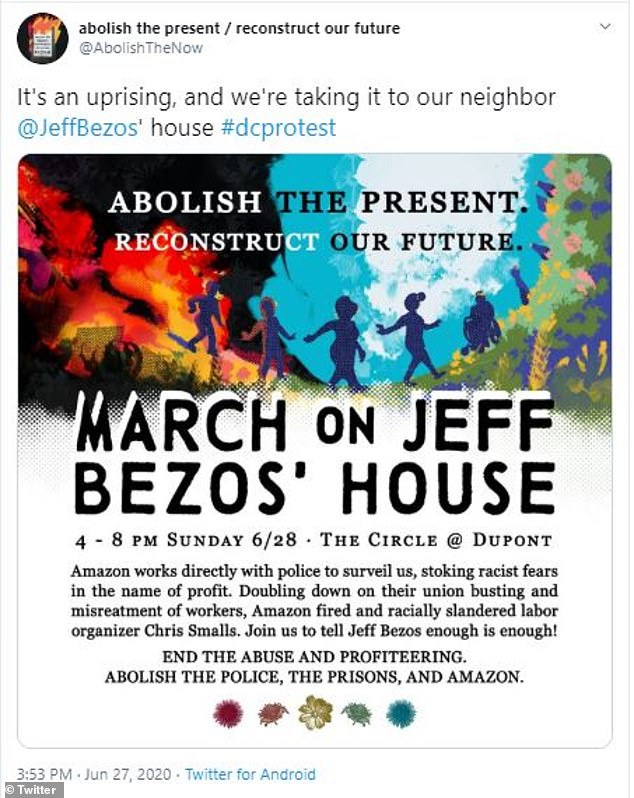 DC protester says: ¿when they become threatened, and we have no voice, the knives come out.¿ In front of a guillotine set up in front of Jeff Bezos complex in DC pic.twitter.com/synjRwgD1H

One video showed a woman holding a megaphone chanting a message: ‘When they become threatened, and we have no voice, the knives come out.’

Although the group that assembled outside was small, the stunt was publicized online as being held on Sunday between 4-8pm.

Although Bezos’s main home is in Washington State close to Amazon’s global headquarters, the founder of one of the biggest e-commerce companies in the world also occasionally lives in Manhattan.

His Washington D.C. mansion, is a 27,000 sq ft property, worth $23 million and is the largest in the city according to the National Review. 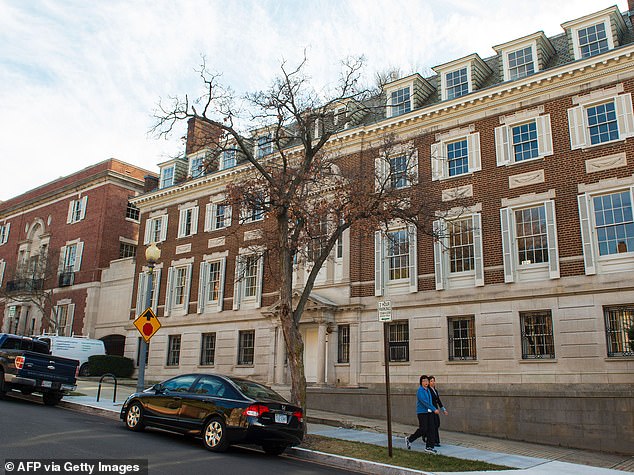 ‘Amazon works directly with police to surveil us, stoking racist fears in the name of profit. Doubling down on their union-busting and mistreatment of workers, Amazon fired and racially slandered labor organizer Chris Smalls,’ a digital flyer circulated online read according to Fox News. ‘Join us to tell Jeff Bezos enough is enough!’

‘END THE ABUSE AND PROFITEERING. ABOLISH THE POLICE, THE PRISONS, AND AMAZON,’ the flier read.

Smalls, who had worked at Amazon’s Staten Island warehouse for five years was fired after is alleged to have organized a walkout at work in protest and an apparent lack of personal protective equipment during the coronavirus pandemic. 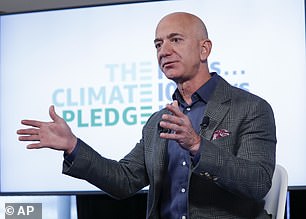 Bezos is one of the richest people in the world with a net worth of around $113 billion,

Amazon said Smalls was fired for ‘violating social distancing guidelines and putting the safety of others at risk.’

Earlier this month Bezos that he was ‘happy to lose’ customers who did not support Black Lives Matter.

The company has joined countless others seeking to end to institutional racism after the death George Floyd, a black man who died after a Minneapolis police officer knelt on his neck for almost nine minutes while he was being taken into custody.

Shortly after the incident the posted a note stating: ‘We believe Black lives matter. We stand in solidarity with our Black employees, customers, and partners, and are committed to helping build a country and a world where everyone can live with dignity and free from fear.’

Bezos is one of the richest people in the world with a net worth of around $113 billion, according to Forbes.