Protests over the death of the unarmed black man George Floyd are continuing to sweep across the globe as violent clashes with police escalate.

For more than a week swarms of people have flocked outside US embassies and taken to the streets to demand justice for George Floyd – the man who gasped ‘I can’t breathe’ when a white police officer knelt on his neck for nearly nine minutes in Minneapolis, Minnesota, last Monday.

Protests calling for justice and rallying against police brutality spread to Mexico City as stones were pelted at the US embassy.

Masked men and women vandalised buildings as authorities arrested three officers in a bid to stem anger over Floyd’s death. 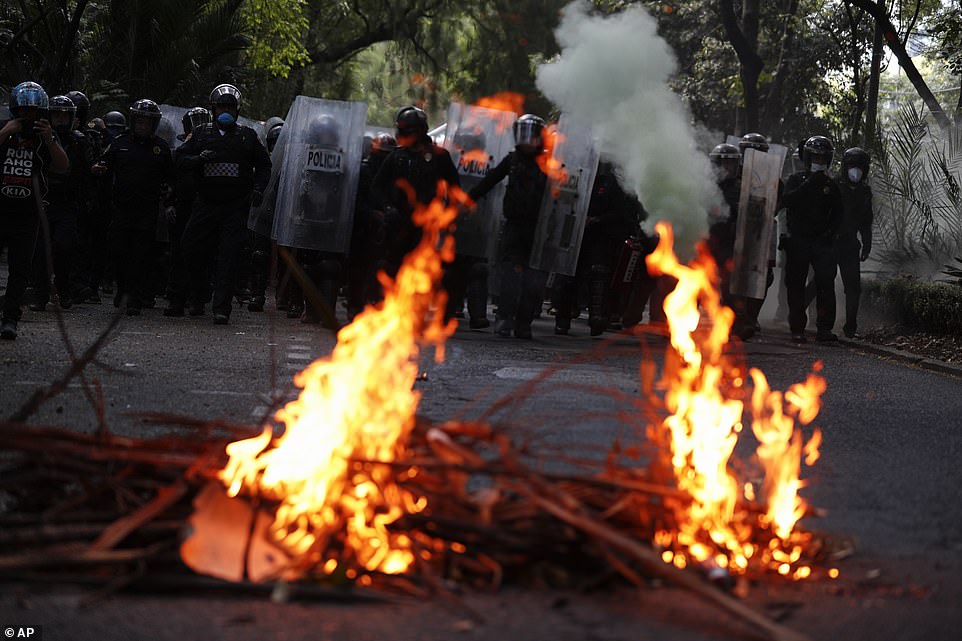 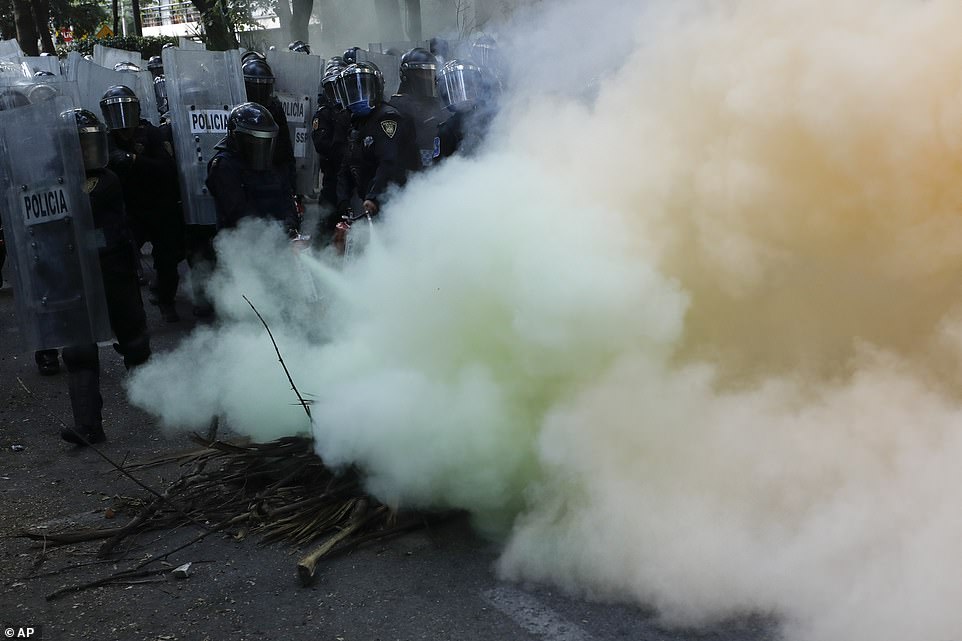 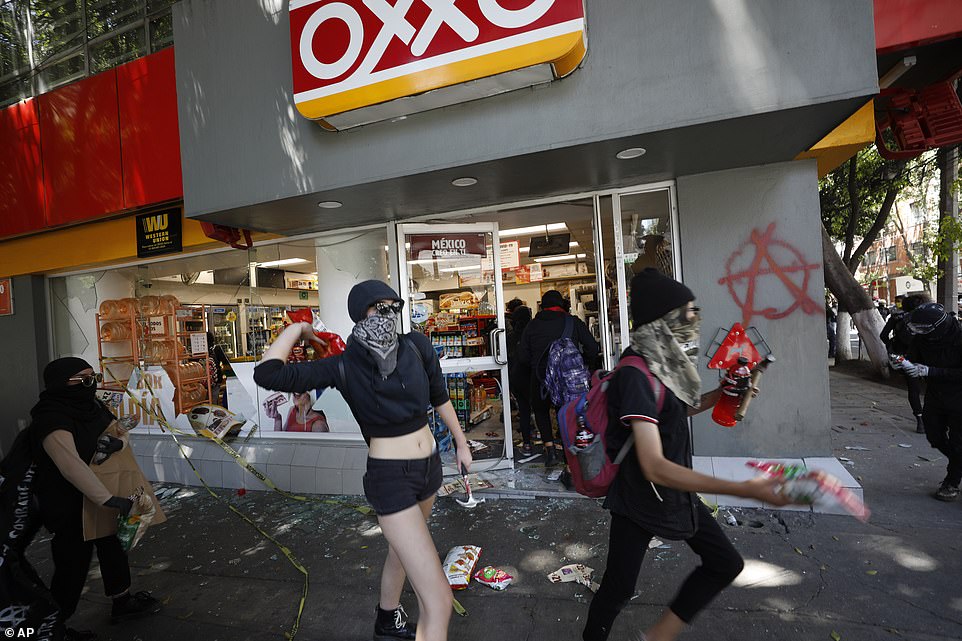 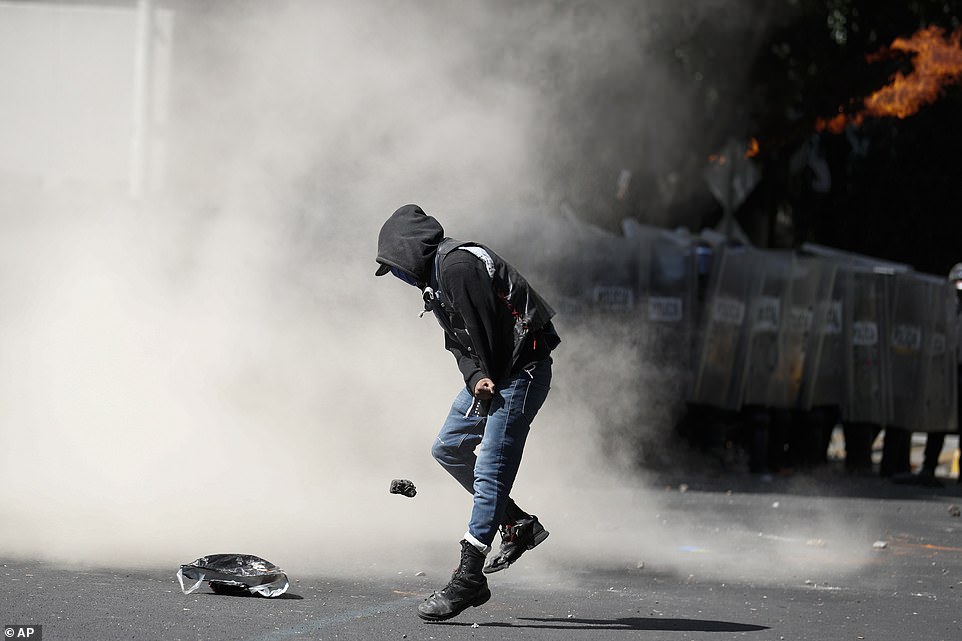 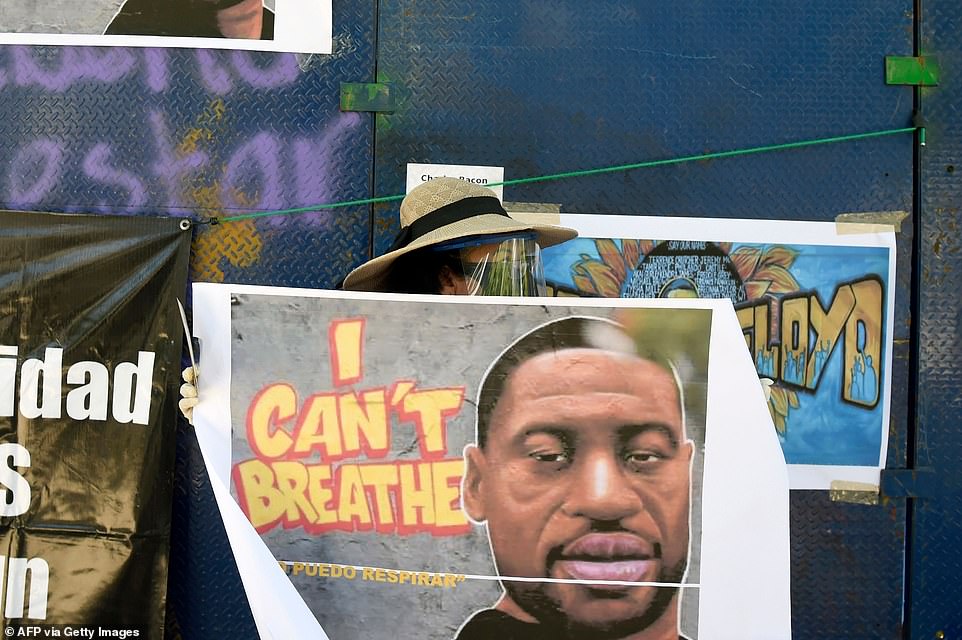 Elsewhere in the Netherlands, hundreds of people gathered for a Black Lives Matter protest in Utrecht. 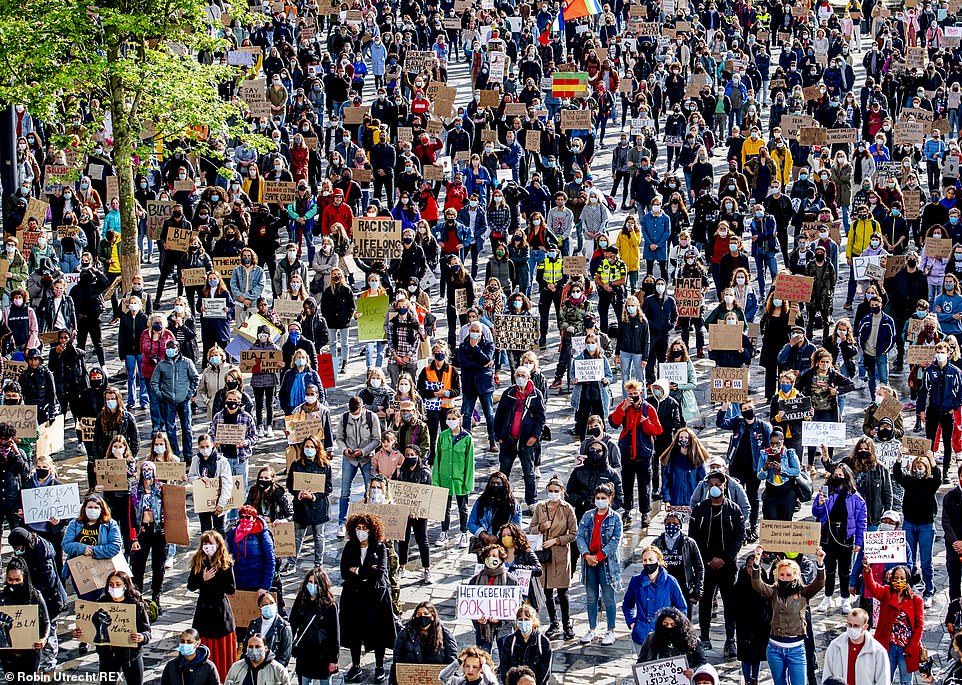 People gather for a Black Lives Matter protest in Utrecht, Netherlands, on June 5 in response to the killing of Minneapolis man George Floyd 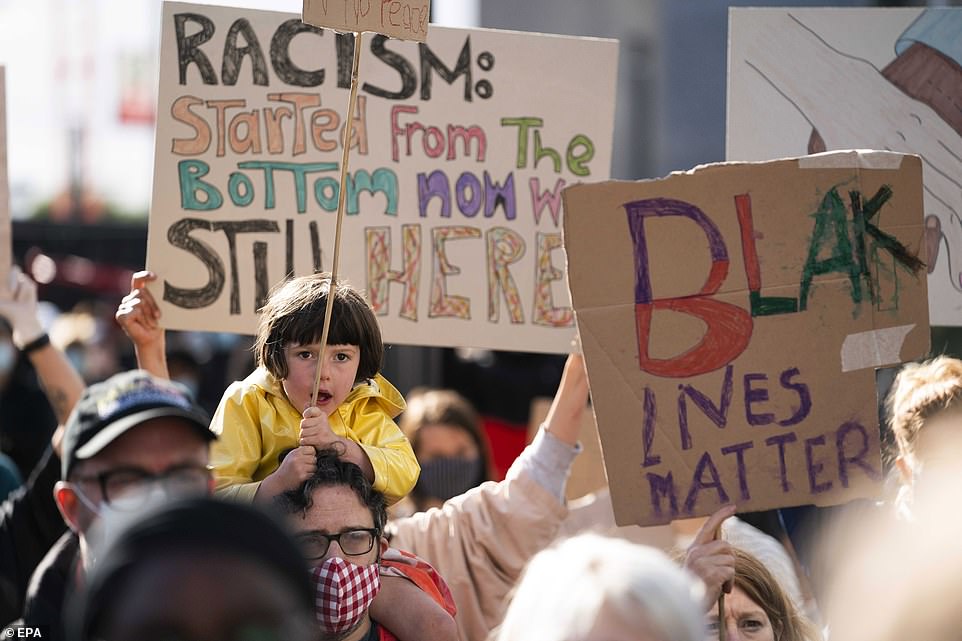 Protesters wear face masks as they take part in a demonstration at the Jaarbeursplein square in Utrech. One sign said ‘Racism started from the bottom now we’re still here’ 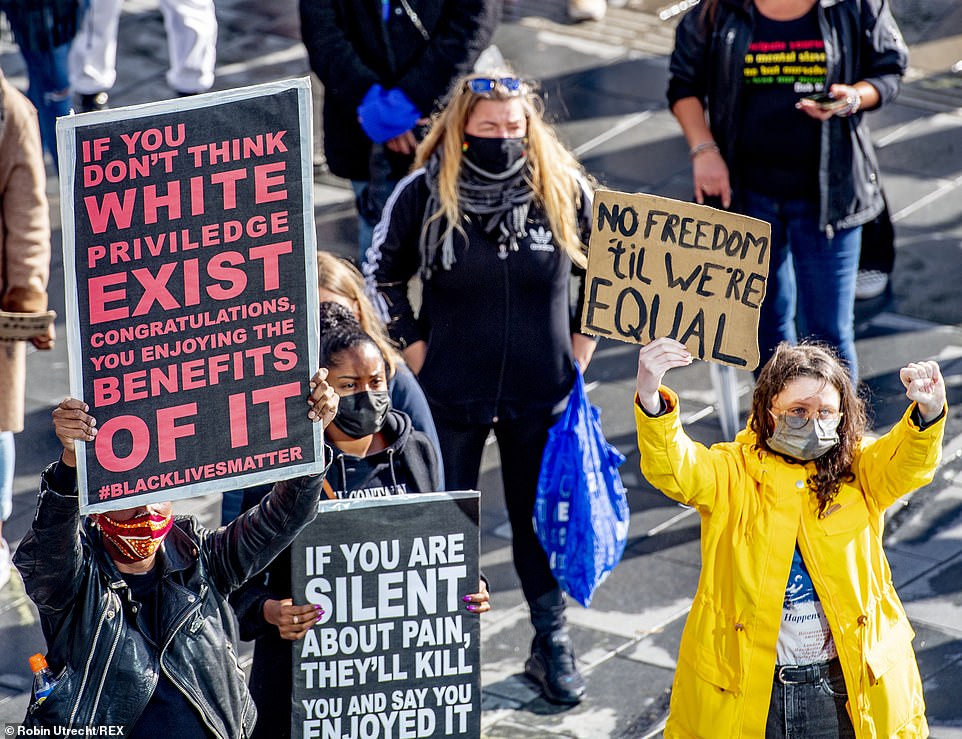 Trump’s right hand holds a black bible as the words ‘I can’t breathe’ are plastered across George Floyd’s back.

A message written next to his body said: ‘RIP George Floyd’. 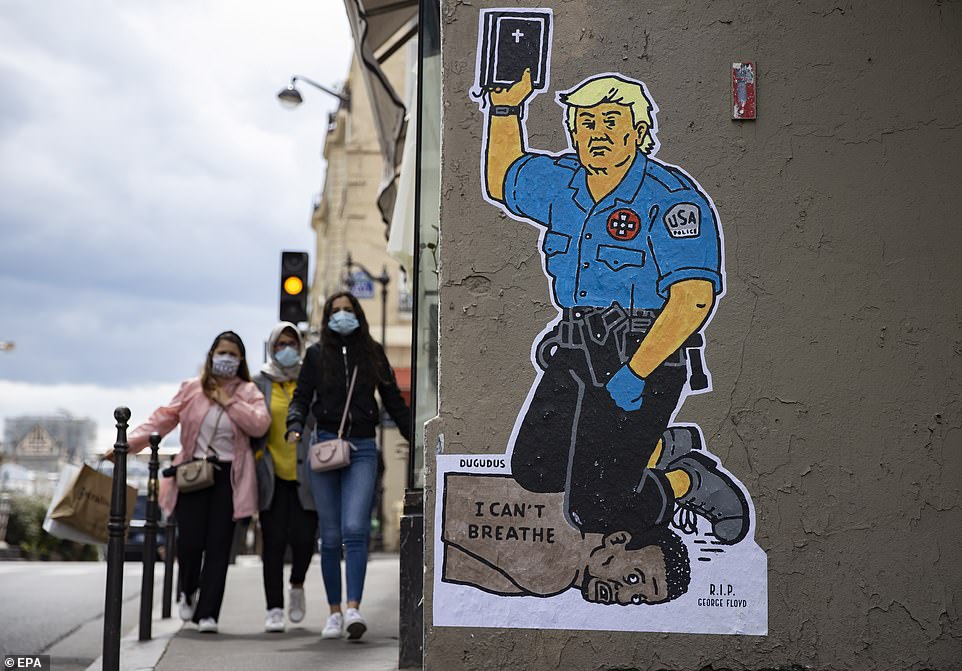 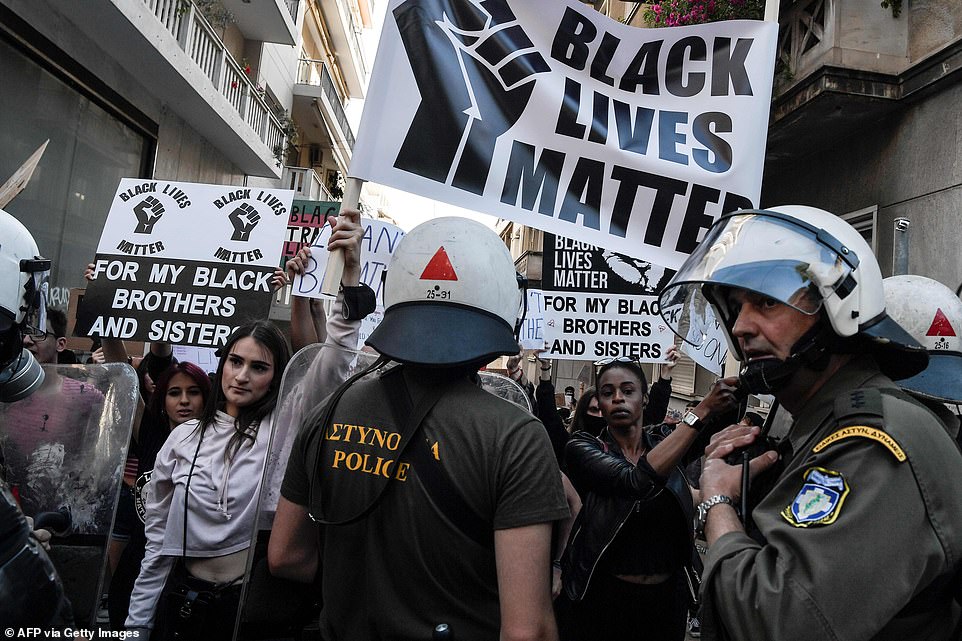 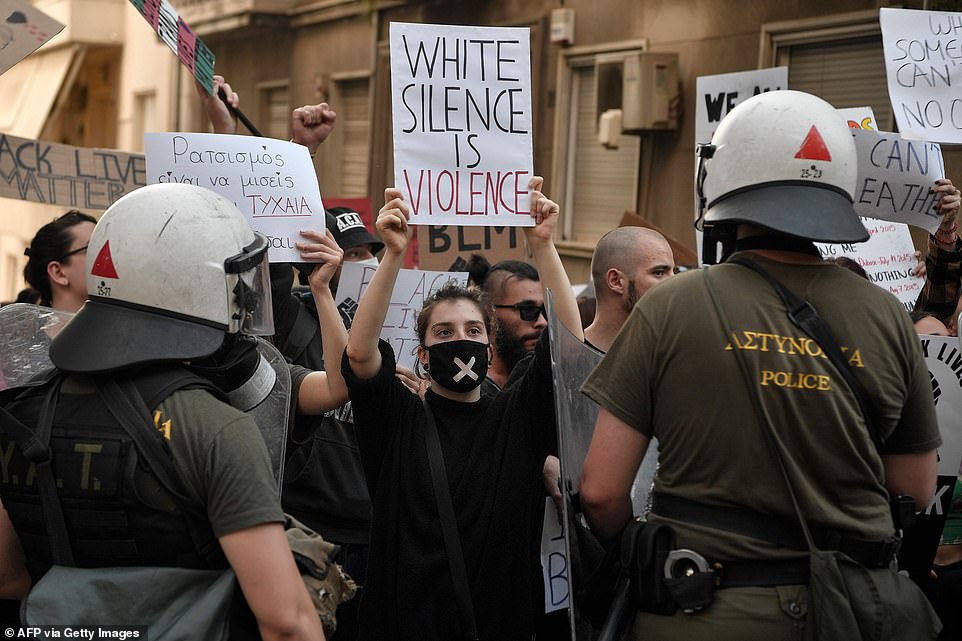 The rallies show no signs of easing off, as demonstrators continue to defy social distancing rules and protest the latest African-American death in US police custody which has sparked outrage across the world.

In Greece dozens of angry demonstrators took to the streets as they clashed with authorities in Athens.

Thousands upon thousands of placards saying ‘We see you America and we are with you’, ‘black lives matter’, and ‘who polices the police?’ were held high in the air across the globe as authorities ramped up efforts to keep the peace.

On Thursday night at least 270 protesters were arrested across New York City after continued marching past the 8pm curfew. 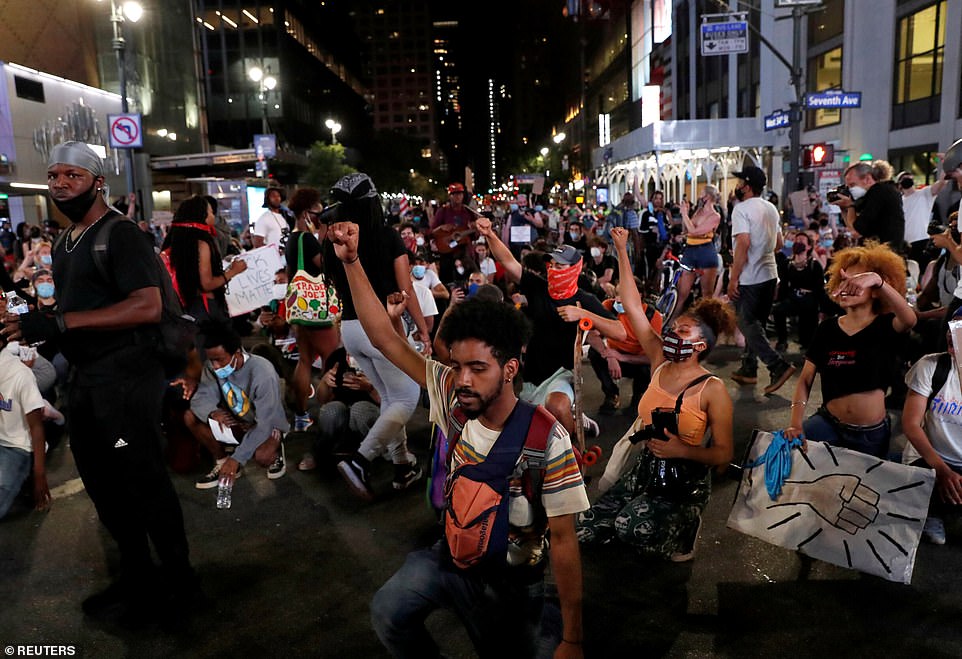 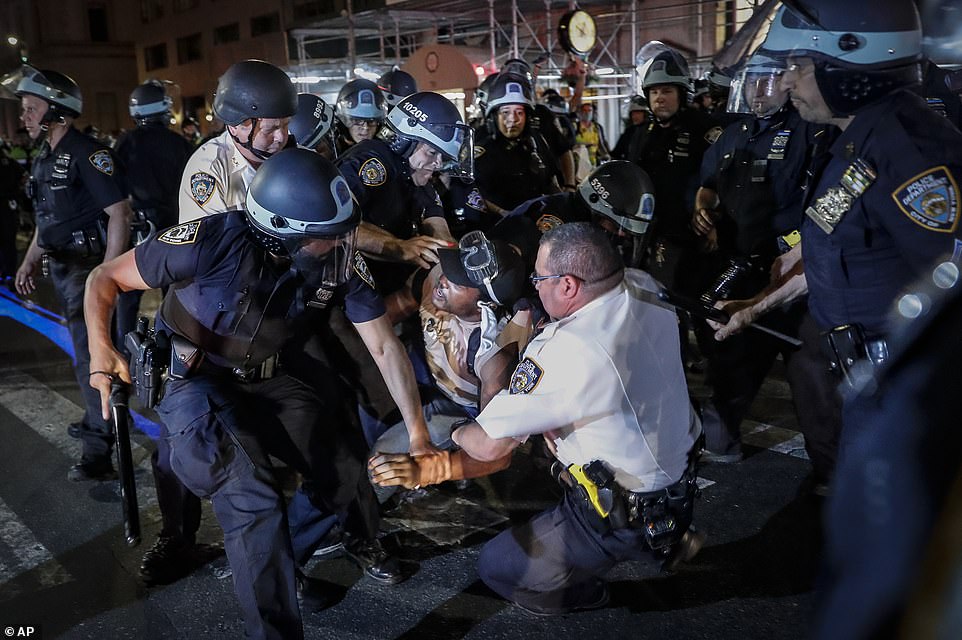 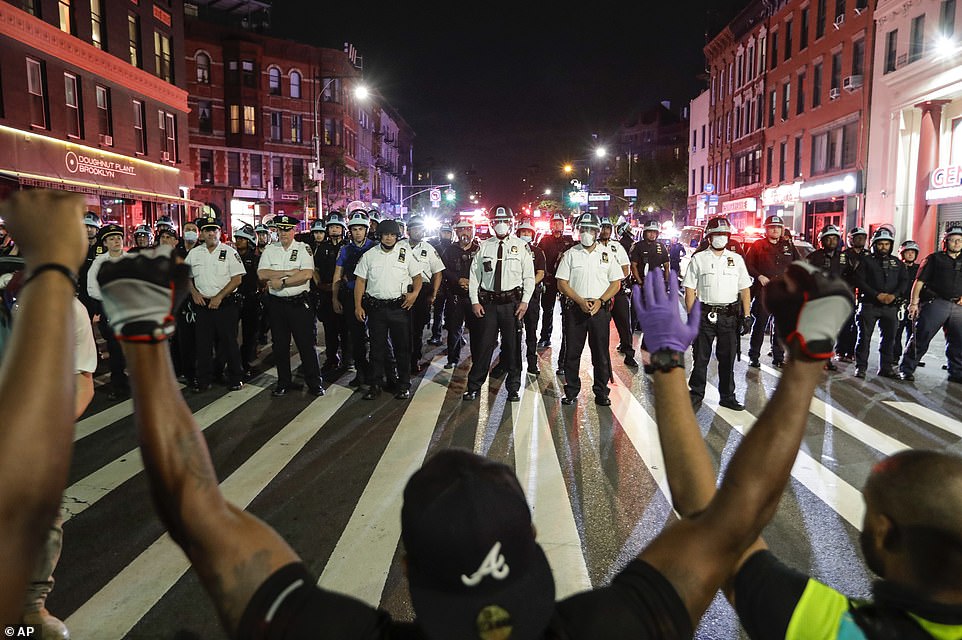 Protesters in Brooklyn  take a knee on Flatbush Avenue in front of New York City police officers during a solidarity rally for George Floyd, Thursday 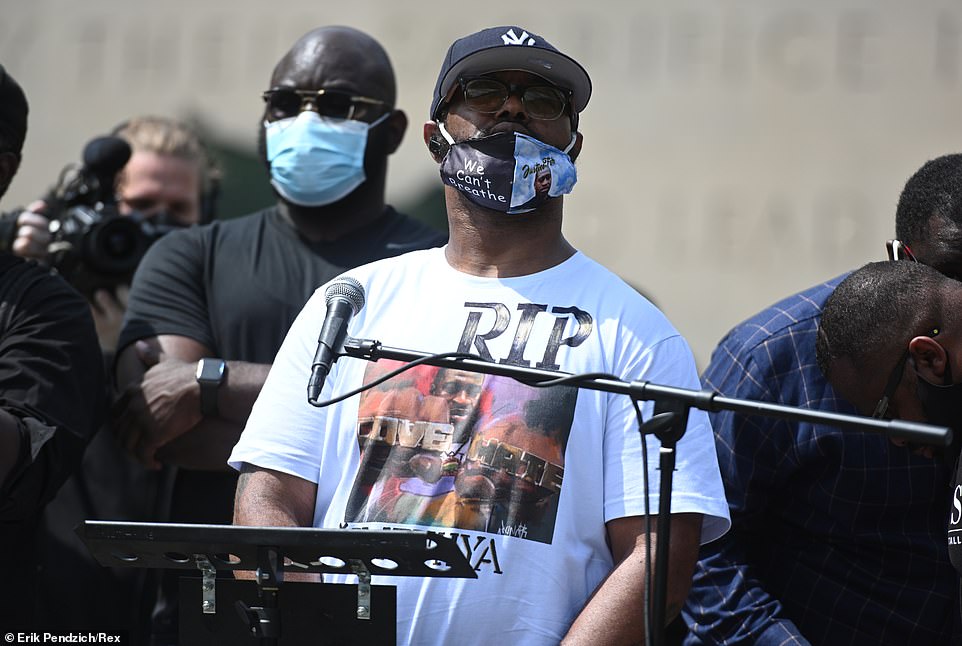 Thousands turned out in support of Floyd and his family, including brother Terrence (pictured) who thanked the crowds for their demonstrations

The arrests came after the NYPD was criticized for their tough crackdown on curfew-breakers the previous night, after many protesters were pepper sprayed or shoved as police tried to disperse crowds.

Hundreds of New Yorkers who were arrested at protests over the past week remain in custody and are yet to be arraigned after widespread policing on the streets has led to delays in processing.

CNN reporter Shimon Prokupecz, who was on 57th Street when cops moved in on crowds, said he witnessed one police officer swing his baton before the captain pulled him back to stop him.

‘They came east, they came west, and they just swarmed this area. It was clear that they wanted to move in and take these demonstrators off the street,’ he said.

Over in the Bronx, police were seen using more aggressive tactics on protesters who had gathered earlier for a rally hosted by activist group Decolonize This Place.

At one point officers began kettling, or closing in on hundreds of protesters and blocking off East 136th Street and Brook Avenue, before aggressively arresting people.

Similar tactics were used on a group at Central Park West near 108th street where officers swarmed groups from all sides and began making arrests. 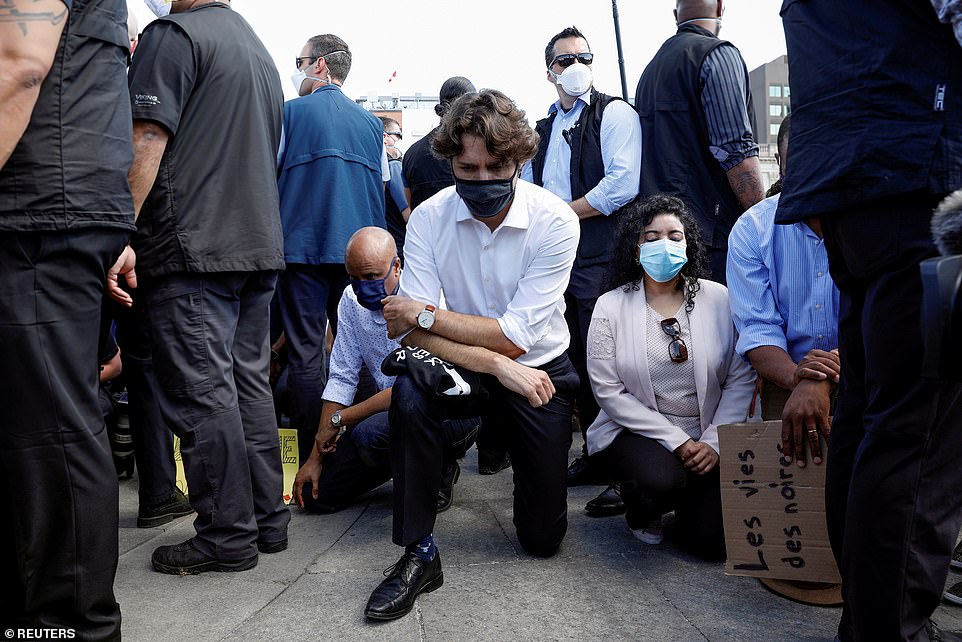 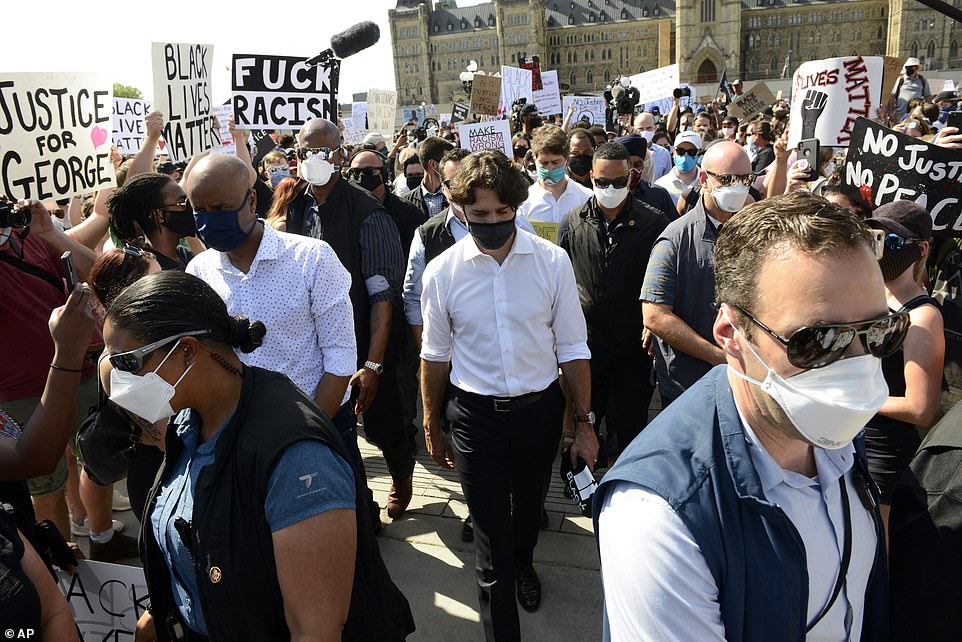 Trudeau made a surprise appearance at the protest on Parliament Hill, where some were heard chanting, ‘Stand up to Trump’

In Canada, Prime Minister Justin Trudeau was seen attending an anti-racism protest on Friday where he took a public knee in solidarity with demonstrators.

And in the UK, Health Secretary Matt Hancock urged Britons not to attend large scale demonstrations scheduled this weekend due to the risk of coronavirus.

Speaking at a Downing Street briefing yesterday, he urged people not to attend demonstrations of more than six people.

The warning came as the Met Police’s deputy chief called protests ‘unlawful’ due to social distancing rules, while London Mayor Sadiq Khan said he would not attend a protest this weekend.

Earlier this week on Parliament Square, on Trafalgar Square and at other locations, thousands knelt on one knee, a form of protest known as ‘taking a knee’ famously used by American footballer Colin Kaepernick to denounce police brutality against black people.

The demonstrators booed as they walked past 10 Downing Street, official residence of Prime Minister Boris Johnson, and some also booed and took a knee in front of New Scotland Yard, London’s police headquarters.

Demonstrators have also come out in cities around the world from as far as Sydney in Australia in solidarity with Floyd and to express anger over racism. 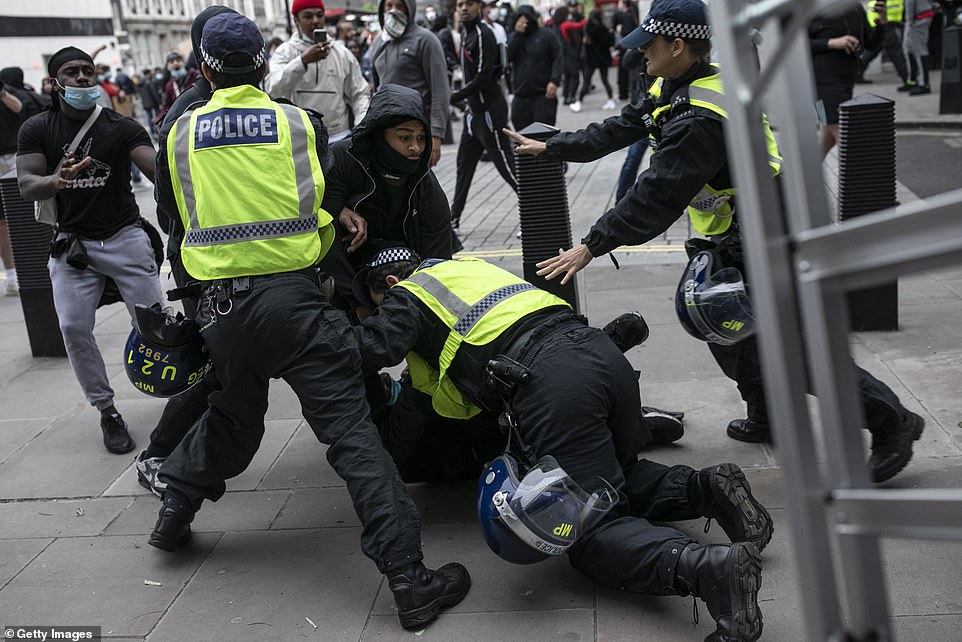 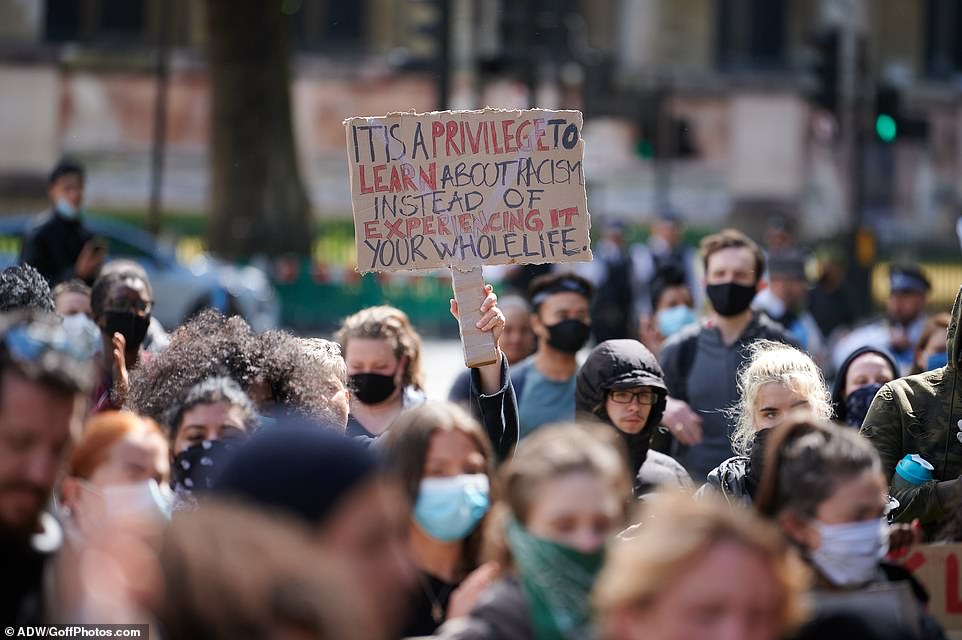 Other protesters in Parliament Square today held up signs, including one which said ‘it’s a privilege to learn about racism instead of experiencing it your whole life’ 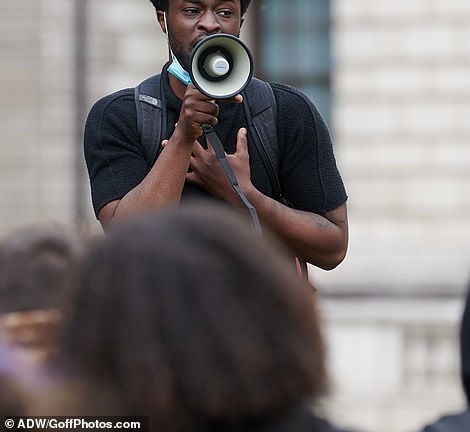 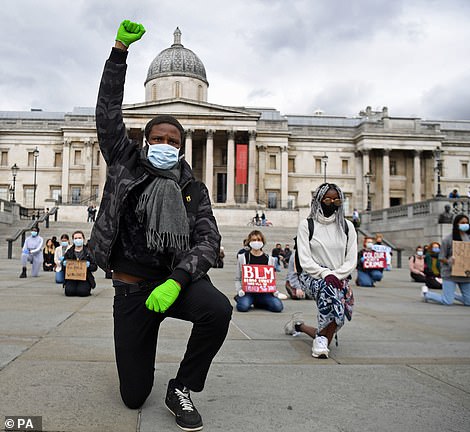