The number of residential properties sold in the UK fell 55.1 per cent in the year to June, official figures have shown.

Month on month, transactions fell 3.1 per cent compared to May 2022.

The significant drop in house purchases year-on-year was likely driven by the end of the stamp duty holiday in June 2021.

This suggests a levelling out of the market after the turbulence of the past few years. However, experts said the housing market was also now being impacted by the cost of living crisis. 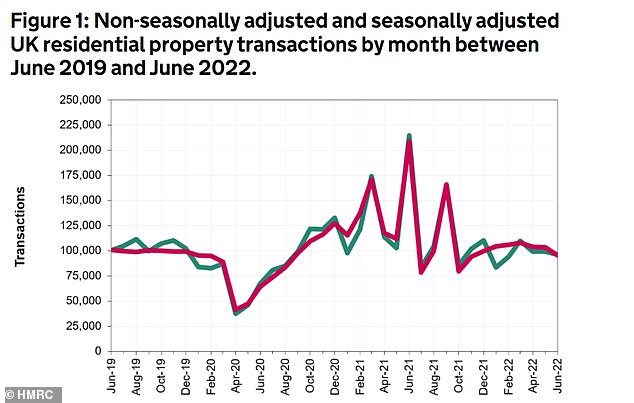 ‘The latest numbers are no exception and show how the cost of living crisis and rising interest rates in particular have contributed to an increase in the length and reduction in the number of transactions.’

Joshua Elash, director of property lender MT Finance, added: ‘The cost of living crisis is starting to bite with a dramatic fall in transactional activity in the property market compared with the same period last year, reflecting broader uncertainty in the economy as a whole, as well as the frenzy we witnessed last year when the stamp duty holiday was about to expire.

‘We must be watchful as this trend could well lead to a more significant and swifter cooling of the housing market than expected, which will translate into downward pressure on house prices as home owners and investors alike focus on cost savings.’

While they will not be welcomed by everyone, house price falls could be good news for first-time buyers and certain types of home movers.

A Yorkshire Building Society report released today found that the cost of living crisis is preventing over a quarter (27 per cent) of people in the UK from buying a home. The figure climbs to a third (33 per cent) of all UK first-time buyers.

However, the cost of living crisis may mean that saving a deposit remains difficult.

Economic volatility was also amongst the most frequently cited concerns for those looking, but feeling unable to buy, a home – with over a fifth (22 per cent) saying in the Yorkshire Building Society report that the current economic climate was another factor keeping them from making a purchase.

Ben Merritt, director of mortgages at Yorkshire Building Society, says: ‘Although a relatively recent development, the cost of living crisis has shot right to the top of the list of concerns when it comes to purchasing a home.

‘The crisis is now being felt across the population and filtering through to all aspects of life. Furthermore, with inflation now at 9 per cent, it is showing no signs of abating.

‘With little visibility into what the future might hold, or indeed how long the crisis will last, our research shows many buyers are hesitant of the market, feeling uneasy about the prospect of making a purchase in the current economic climate.

‘The extent to which there is a supply issue in the housing market is demonstrated by the fact that, despite this, house prices have continued to rise, with demand remaining far greater than supply regardless.’