Piers Morgan lashed out at Brandon Lewis today over the government’s testing ‘shambles’ as just seven days remain to reach the 100,000-a-day pledge.

The Tory minister admitted 100,000 tests were to be ‘done’ per day after attempting to claim the government had only pledged to increase the ‘capacity’ of tests to 100,000 a day by the end of April.

Mr Lewis also said he ‘does not personally know’ how many individual people were tested yesterday, to which Piers said: ‘Shall I tell you? 13,000.’

The Tory minister replied ‘as I say, 20,000 tests were done’, to which the Good Morning Britain presenter remarked: ‘It matters that you don’t know that difference.

Northern Ireland Secretary Brandon Lewis pictured above during his appearance on Good Morning Britain today. The Tory MP was grilled over the government’s testing capacity

‘I have the capacity for three cars, I have one and two bikes, do you see difference? You’re only testing 13,000, I find it deeply worrying. No wonder testing is a shambles.’

Piers later tweeted about the exchange, saying it was ‘staggering’ to discover government ministers ‘don’t know’ the difference between the number of tests being carried out and the number of people being tested, which both vary due to some people being counted twice.

The TV host also grilled Mr Lewis over claims the government has capacity for 40,000 tests but are only managing to do 22,000 a day.

Piers then questioned Mr Lewis over only one in four care home workers who fear they have coronavirus being tested.

‘One in four care home workers have been tested, it is an absolute disgrace, and for you to keep talking about capacity when we’ve got three quarters of our care workers who think they are infected unable to get a test is a national disgrace, isn’t it?’

The Conservative MP replied: ‘Well that’s why we’re so determined and actually what I’ve been focused on about talking to you Piers is how we increase the number of people who can access those tests, and that’s why I’m making the point. 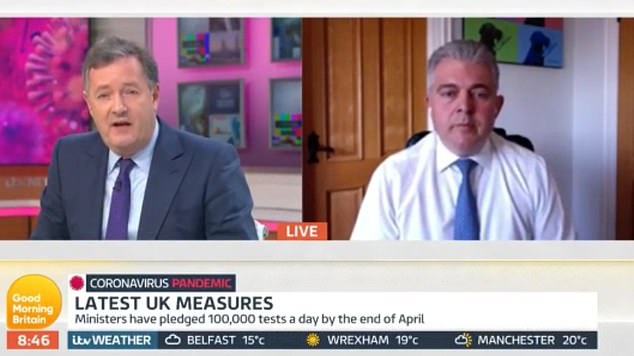 ‘We want to make sure that we build on that 18,500 care workers get more than the ability to access it by having more test centres, not having to go through their employer to get that test in the first place.’

Piers interjected: ‘But how do you feel on a human level that care workers can’t get tests?

‘People are desperate for a test, I’m sure you do care that people aren’t being tested. People will die because you can’t get them.’

Mr Lewis responded: ‘I’m agreeing with you, it’s dreadful we can’t get more people tested. We need to upscale the ability for people to get the tests.

‘We are determined to deal with this. The health department have done an amazing job, across private and health service it has been phenomenal.’

He added: ‘You’re right we need to give more people access to the tests.’

The Good Morning Britain presenter later posted about the exchange on Twitter, saying it is ‘important we hold them to the original pledge’

The presenter posted afterwards: ‘After Govt minister Brandon Lewis spent the morning trying to reposition the Govt’s 100,000-tests-a-day-by-end-of-April pledge as “capacity”, we finally got him to admit on @GMB the pledge was in fact 100,000 tests to be DONE per day.

Matt Hancock has just seven days left to reach his goal of six figure daily testing but recent figures show fewer than 20,000 tests were actually carried out on Monday despite capacity being at just shy of 40,000.

Ministers announced that they were expanding the number of drive-through testing sites from 26 to 50 in an apparent admission that staff in some parts of the country have faced an uphill battle to get tested.

Other key workers will also now be eligible for tests, including transport workers and supermarket staff.

Ministers continue to struggle to explain why there is such a large discrepancy between the number of tests being carried out and available capacity.

Asked about the gap, the Prime Minister’s Official Spokesman previously said: ‘Ministers have been very clear that any spare capacity should be used to test NHS and social care staff and their families.

‘As a result of the increased capacity which we have available, other critical care workers can now also get tests so that they can continue their vital work on the frontline.’

On the UK Government’s website, the Health and Social Care Department states: ‘The UK will carry out 100,000 tests for coronavirus every day by the end of this month.’

It explains the pledge will be made as part of a ‘five-pillar plan’ which includes ‘building a mass-testing capacity for the UK at a completely new scale.’