Zara owner Inditex has warned of further price rises even as it rakes in bumper profits.

And it said further increases were on the way – fuelling fears companies are guilty of ‘greedflation’ where they use rising costs to push up prices more than necessary.

The warning of higher prices in the shops and online came as Inditex –whose chairman Marta Ortega Perez is the daughter of founder Amancio Ortega Gaona – said profits jumped 80 per cent to £647million in the three months to the end of April.

The surge came as sales rose 36 per cent to £5.7billion as shoppers kept snapping up its clothing despite the higher prices.

Inditex also revealed profit margins – the profit it makes on selling its goods – are now at a ten-year high of 60 per cent.

The company said it was buoyed by a ‘sharp recovery’ in footfall as customers snapped up new season collections across its brands as part of a post-Covid wardrobe renewal.

Inditex has benefited from pushing up prices faster than its rivals while being able to hold on to loyal customers, according to analysts.

In normal market conditions companies are often dissuaded from raising prices because of competition fears.

But its strong results come as firms have been accused of ‘greedflation’, where companies using the cover of spiralling prices in the marketplace to push through prices they may not be able to pass on in normal times.

As the cost of living crisis deepens, retailers are balancing passing cost increases on to consumers and ensuring that their products stay affordable.

Russia’s invasion of Ukraine and renewed lockdowns in China have added to pressures. But analysts say Inditex has recovered faster than most.

Zara has raised its prices by 10 per cent or more from a year ago every month since January, according to UBS research.

In April, its starting prices rose by an average 18.5 per cent, the data showed. Inditex said price rises across the group have been around 5 per cent. 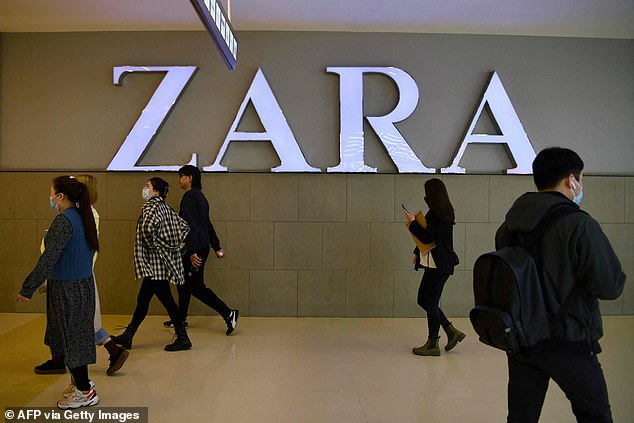 Chief executive Oscar Garcia Maceiras said the company will continue to increase prices in markets affected by inflation during the second quarter while keeping its clothes affordable.

He told analysts: ‘We continue to expect pricing to contribute to 2022 Spring and Summer sales in a mid-single digit with no impact on volume.’

And Inditex flagged it has set aside £184million to cover a hit from closures this year amid Russia’s invasion of Ukraine.

But he said its increasing profit margins do not ‘smack of excessive profiteering’.

Mould said: ‘Achieving the milestone of sales ahead of pre-pandemic levels and boosting gross margin despite the challenge of rising costs and supply chain issues is impressive.

‘That this was achieved, at least in part, by raising prices is testament to its brands’ appeal with shoppers, though a recent slowing in sales growth shows the company is not immune to the impact of cost of living pressures on discretionary spend.’

She said: ‘It is unlikely that Inditex will be able to get away with increasing prices more than it needs to, as younger shoppers, which make up a large proportion of its customer base, are expected to cut back the most on fashion spend during this challenging time.

‘Large price increases would result in it becoming less competitive and losing spend.’