A pro-democracy Hong Kong media tycoon was yesterday arrested along with eight other journalists after Chinese officials raided his newspaper offices in the city.

Jimmy Lai, 71, whose net worth is just shy of a billion dollars, was handcuffed and hauled off his premises under the new draconian security law.

ITV News freelancer Wilson Li was among those arrested. The broadcaster said it was seeking information from Chinese authorities.

Downing Street said it was ‘deeply concerned’ by the detention of journalists under the national security law – which was imposed in June following months of anti-Beijing protests in the city. 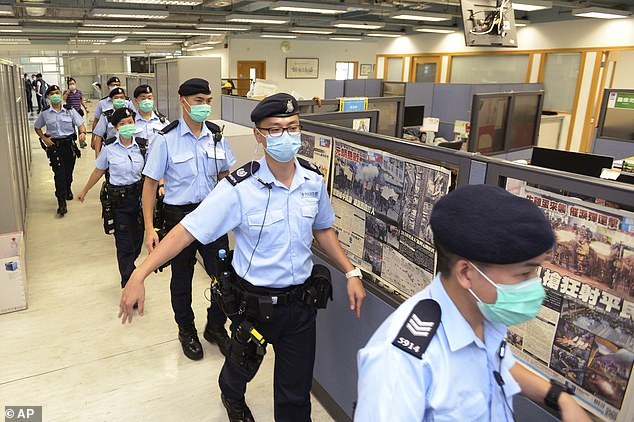 Raid: A fleet of police officers wearing masks conduct a raid inside Apple Daily headquarters on Monday in one of the most high-profile operations under the new security law

Lai, 71, was led away in handcuffs and detained on suspicion of colluding with foreign forces – one of the new offences under the law – and fraud.

Lai was among nine men, including his two sons, and one woman detained on charges that include colluding with foreign forces.

This offence under the security law comes with the threat of life in prison.

The editor of Lai’s Apple Daily paper said its journalists would not be intimidated by the raid after staff posted a live-stream of dozens of police on their premises.

However, the Committee to Protect Journalists said the raid ‘bears out the worst fears that the law would be used to suppress critical pro-democracy opinion and restrict press freedom’.

China insists the law is necessary to restore order after last year’s mass protests, but critics say it tramples on the freedoms guaranteed to Hong Kong after its handover from Britain in 1997.

The Prime Minister’s spokesman said the Government was ‘deeply concerned’ over the arrest of Mr Lai and the others.

He added: ‘Freedom of the press is explicitly guaranteed in the Sino-British joint declaration and basic law and is supposed to be protected under article four of the national security law.

‘This is further evidence that the national security law is being used as a pretext to silence opposition.

‘The Hong Kong authorities must uphold the rights and the freedoms of its people.’

Apple Daily staff were yesterday ordered to leave their seats and line up so police could check their identities as officers conducted searches across the newsroom.

At one point Lai was present, in handcuffs and surrounded by officers. Police said the search was conducted with a court warrant which was shown to staff.

‘This is unprecedented, and would be unimaginable only one or two months ago,’ he said.

Apple editor Law later sent a note to staff telling reporters to ‘stand by their posts’ as he vowed to get the latest edition printed despite the raid.

Lai’s two main titles – the Apple Daily and the digital-only Next magazine – openly back democracy protests in a city where competitors either support Beijing or tread a far more cautious line.

The two publications have been largely devoid of advertisements for years as brands steer clear of incurring Beijing’s wrath.

China routinely calls him a a ‘traitor’ and a ‘black hand’ behind last year’s protests.

Allegations of Lai colluding with foreigners went into overdrive in state media last year when he met with US Secretary of State Mike Pompeo and Vice President Mike Pence.

Speaking in June, he described Beijing’s new security law as ‘a death knell for Hong Kong’ and said he feared authorities would come after his journalists.

‘I’m prepared for prison,’ he said, two weeks before China’s rubber-stamp parliament approved the new law over the head of Hong Kong’s legislature. 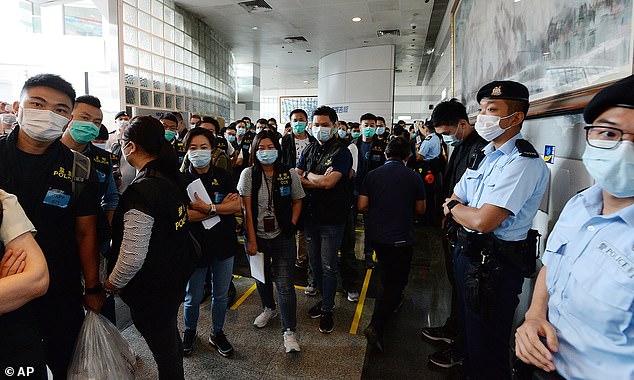 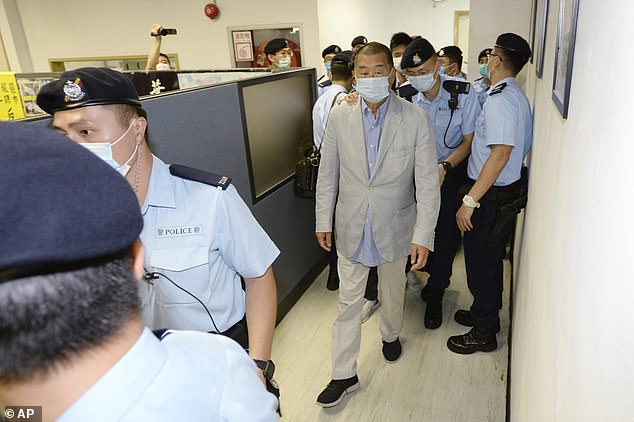 Beijing’s new law targets secession, subversion, terrorism and colluding with foreign forces, leading to fears it would be used to silence criticism.

The law’s introduction has coincided with ramped up police action against democracy supporters.

About two dozen – including Lai – have been charged for defying a police ban to attend a Tiananmen remembrance vigil in early June.

Lai and many others are also being prosecuted for taking part in last year’s protests, the largest outbreak of unrest since the city’s return to Chinese rule.

Critics of the new law say it violates the principle of ‘one country, two systems’ which means Hong Kong is guaranteed freedoms not enjoyed on the mainland.

Washington last week responded by imposing sanctions on a group of Chinese and Hong Kong officials – including the city’s leader Carrie Lam.

China says the security law is its own internal affair and has criticised other countries for their interference.

Bejing also responded with criticism after Britain announced plans to open up a path to citizenship for nearly three million Hong Kongers. 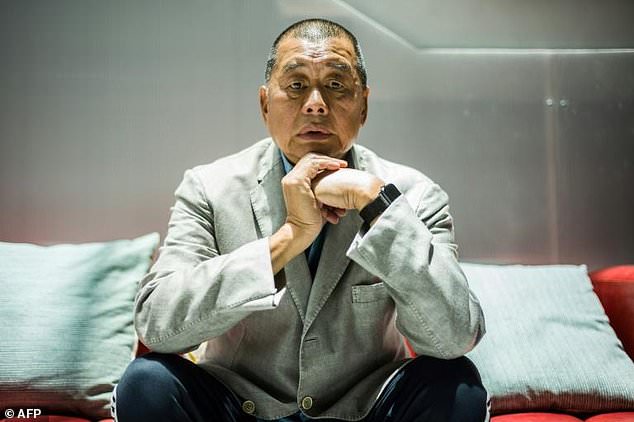 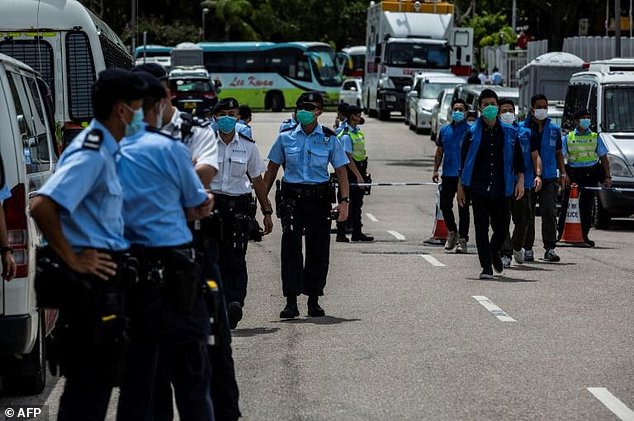