By David Barrett For The Daily Mail

The tactics used by police dealing with protesters face a major review amid frustration that Extinction Rebellion and Black Lives Matter demonstrators have been allowed to run amok.

Priti Patel wants a police watchdog to closely examine whether forces have wrongly allowed hugely disruptive rallies to be mounted – even though they interfere with other people’s daily lives.

One aspect of the review will seek to ensure protesters who cause extreme disruption are punished to the full limits of the law.

It could ultimately mean the ringleaders face jail time rather than a slap on the wrist such as a fine, Government sources said.

The Home Secretary is concerned police are too timid in tackling large-scale protests that deliberately cause long-term disruption.

In particular, Home Office sources highlighted the ‘shut down’ of Westminster by Extinction Rebellion (XR) last summer, as well as similar protests in London’s Oxford Street last October and a blockade of printing presses last month which affected distribution of newspapers including the Daily Mail. 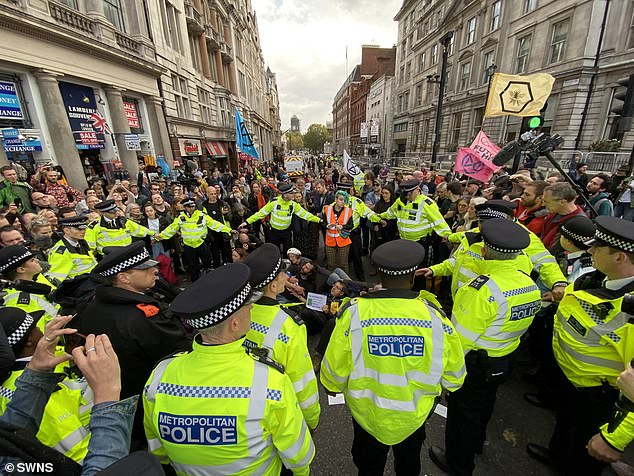 Details published yesterday show the review by Her Majesty’s Inspectorate of Constabulary (HMIC) will scrutinise ‘how well the police balance the rights of protesters with the rights of other people, and the impact on communities and minorities’.

The HMIC will also look at whether police need additional powers to deal with protests, how they manage intelligence about protest groups and how they prepare for major demos.

‘We want to understand before we consider new powers whether police could be charging people under existing laws, such as public nuisance,’ said a Whitehall source.

‘It’s no good carrying on like they are at the moment where problematic protesters are handed a £100 fine which is then paid by mummy or daddy and they’re straight out to cause chaos again. At the moment groups such as XR are treated like other protests, such as a trade union march. But normal protests do not hold the country to ransom.’

…as print blockade duo get slap on wrist

Two Extinction Rebellion protesters yesterday admitted obstructing roads as part of a protest that stopped the distribution of millions of newspapers.

Eleanor McAree, 26, and Will Farbrother, 39, were among dozens of activists who blockaded the Newsprinters printworks in Broxbourne, Hertfordshire, last month.

McAree, a £41,000-a-year project manager from Brentwood, Essex, was fined £500 and told to pay a £50 victim surcharge at St Albans Magistrates’ Court.

She was also fined £150 for breaching a nine-month conditional discharge imposed over another XR protest.

Farbrother, a £39,000-a-year civil servant from Walthamstow, north-east London, was given a six-month conditional discharge and told to pay £105 costs and a £22 victim surcharge.

The blockade hit the distribution of 3.5million newspapers and magazines including the Daily Mail, The Sun, The Times and The Daily Telegraph.

In her speech to the Conservative Party Conference on Sunday Mrs Patel criticised ‘indefensible’ actions by XR and Black Lives Matter protesters.

‘This Government will always defend the right to protest. That right is a fundamental pillar of our democracy,’ she said.

‘But the hooliganism and thuggery we have seen is not. It is indefensible. There is no excuse for pelting flares at brave police officers.