Under the points-based system coming into effect from January 1, EU nationals will receive more equal treatment with people from the rest of the world – although they will not have to provide fingerprints for visas.

In a statement to the Commons, Ms Patel said there will also be fast-track visas for health workers coming into the country – although care staff have been left out.

Boris Johnson said the blueprint showed the UK will have an ‘humane and sensible’ immigration system despite ‘taking back control’ after Brexit.

Under the plans, ministers will be given powers to exclude or deport foreign criminals who have received prison sentences of more than a year.

Officials will also be able to bar persistent offenders such as pickpockets and burglars, even if they have been sentenced to less than a year.

The change would mean criminals from the EU are treated the same as currently happens to those from outside the bloc.

In a statement to the Commons, Priti Patel (file picture) said there will also be fast-track visas for health and care working coming into the country

How will the UK’s new points-based immigration system work?

A new points-based system immigration system will come into force in the UK from January 1 next year when freedom of movement ends.

People who want to live and work in the UK will need to gain 70 points to be eligible to apply for a visa.

The first 50 points will be awarded for meeting key requirements of an ability to speak English to an acceptable level, having a job offer from an approved employer, and the role being at an A-level equivalent skill level.

The applicant must obtain a further 20 points to get approval.

This would be covered if they meet the general salary threshold of £25,600, or a higher ‘going rate’ for their job.

But if they are not quite at the right pay level the applicant can secure more points by having a post in a ‘shortage occupation’, or holding a relevant PhD.

Foreign health workers will be able to apply for a fast track visa to come to the UK.

International students will be able to stay in the UK for at least two years after graduating.

Foreign criminals sentenced to more than a year in jail could be banned from ever entering the UK.

Anyone who committed an offence which caused serious harm or persistent offenders could also be barred.

Foreign criminal already in the UK who has been sentenced to a year or more in prison will be considered for deportation.

Under the present rules, convicted criminals from the bloc can only be excluded on a case-by-case basis.

The new immigration system is designed to cut the number of low-skilled migrants entering Britain from the beginning of next year, but aims to make it easier for higher-skilled workers to get UK visas.

People who want to live and work in the UK will need to gain 70 points to be eligible to apply for a visa.

Points will be awarded for key requirements like being able to speak English to a certain level, having a job offer from an approved employer, and meeting a minimum salary threshold.

A health and care visa will provide a route for key health professionals to work in the UK.

However, it will not include care workers, sparking anger from Labour.

Shadow home secretary Nick Thomas-Symonds said: ‘What does this Government have against care workers?

‘The latest papers on the proposed immigration system confirm that the Tories do not consider carers as skilled workers.

‘Have they learned nothing from this crisis? We will be seeking urgent clarification on this.’

Meanwhile a graduate route will allow international students to stay in the UK for at least two years after completing their studies.

A policy document setting out more information on the proposed points-based immigration system said: ‘A robust and consistent approach to applying the UK criminality thresholds for the refusal of entry, permission to remain in the UK, deportation and exclusion, to EU and non-EU citizens, will be taken as part of the Points-Based System.’

It added that those seeking to come to the UK can be refused where they have a conviction with a custodial sentence length of at least 12 months, committed an offence which caused serious harm, were a ‘persistent offender who shows a particular disregard for the law’, or had ‘character, conduct or associations’ meaning their ‘presence is not conducive to the public good’.

Anyone already in the UK who has been sentenced to a year or more in prison ‘must be considered for deportation’, the Government papers add.

The document providing further information on the new immigration system said: ‘Where the 12-month criminality deportation threshold is not met, a foreign criminal will still be considered for deportation where it is conducive to the public good, including where they have serious or persistent criminality.

Asked if he thought there would be enough people coming in to work in the social care system, Mr Johnson told reporters: ‘I do. Don’t forget, one of the amazing things we’ve seen in the last few months is actually there are more EU nationals, I’m proud to say, living and working in this country than we even thought.

‘We’re seeing huge numbers of people registering for their right to remain and that’s great so we have a big, big stock of workers who are helping out in this country who have come from abroad.

‘Although of course we are going to be taking back control and we are controlling our immigration system we’re not going to be simply slamming the gates and stopping anybody anywhere coming into this country.

Ms Patel said today: ‘At a time where an increased number of people across the UK are looking for work, the new points-based system will encourage employers to invest in the domestic UK workforce, rather than simply relying on labour from abroad.

‘But we are also making necessary changes, so it is simpler for employers to attract the best and brightest from around the world to come to the UK to complement the skills we already have.

‘It will be simpler for businesses to access the talent they need as we have removed the Resident Labour Market Test, lowered the skills and salary threshold, and removed the cap on skilled workers.

‘We will be introducing a new-fast track health and care visa. This will make it easier and quicker for talented global health professionals to work in our brilliant NHS and in eligible occupations in the social care sector. The visa fee will be reduced and health professionals applying can expect a decision on whether they can work in the UK within just three weeks, following biometric enrolment. We will exempt frontline workers in the health and social care sector and wider health workers from the requirement to pay the Immigration Health Surcharge.’

The Government is also ‘refining’ the visa process for students and launching a graduate route next summer, the statement said, adding: ‘The student route will be streamlined for sponsoring institutions and applicants, and the graduate route will help retain the brightest and the best students to contribute to the UK post-study.’ 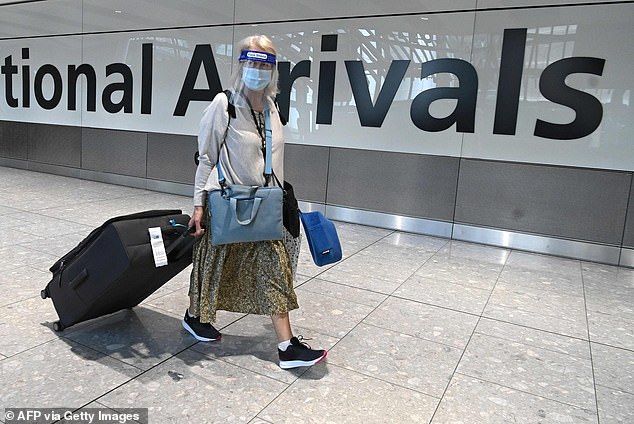 Under the points-based system coming into effect from January 1, EU nationals will receive more equal treatment with people from the rest of the world – although they will not have to provide fingerprints for visas (file picture)