Priti Patel has told chief constables to crack down on partygoers and pubs and says there is ‘no room for complacency’ in the battle against Covid lawbreakers.

The Home Secretary, who has vowed to even snitch on her own neighbours if they were caught flouting coronavirus rules, has written to police leaders to demand more patrols and visibility in Tier 2 and 3 areas over the festive period.

But the letter appears to have backfired somewhat after she was dubbed ‘Pushy Patel’ by some senior officers, who feel she is overstepping the mark and removing their operational independence, according to the Times.

The correspondence reminds England and Wales’ 43 forces of the ‘benefits’ of proactive policing, while urging them to focus efforts on areas where infection levels are high.

Recent days have seen crowds of people rush to leave restricted areas, but forces have ruled out using roadblocks and routine vehicle stops to ensure people are following the regulations.

Dedicated ‘Covid patrols’ have been set up in some parts of the country, though, to try and stop breaches.

But a police source told the Times: ‘It is outrageous really. They write the law and it’s up to police forces how they interpret it.

‘She shouldn’t be telling us where to enforce it, and which tiers to do more in.’

Senior figures in Whitehall, however, have hit back at the response from some officers, and suggested the minister would not be called pushy if she were a man.

Ms Patel grabbed headlines back in September, when the Rule of Six was announced, and she admitted she’d snitch on friends on her own street if necessary. 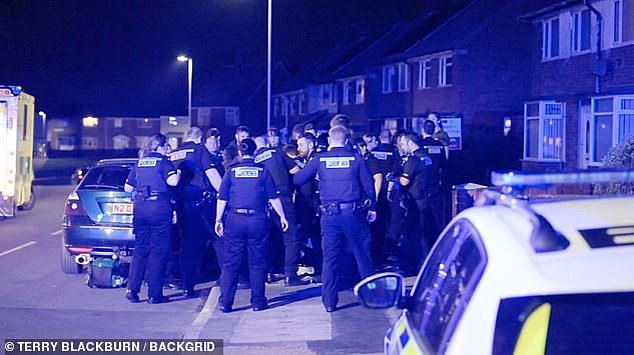 ‘I’m rarely at home but if I saw something that I thought was inappropriate then, quite frankly, I would call the police,’ she told Sky News.

She added: ‘It’s not dobbing in neighbours, it’s all about us taking personal responsibility.’

Ms Patel said it was a ‘personal choice’ on whether to report breaches, but if there was a ‘big party taking place’ it would be ‘right to call the police’.

‘Anyone that is effectively defying the rules, they will be helping to spread coronavirus,’ she said.

‘That is not a good thing and obviously we all have a role to play.

‘We’re all taking personal responsibility, we all have to be conscientious to one another.’