Priti Patel today slammed ‘extraordinarily dangerous’ drivers hitting speeds of up to 151mph as they use Britain’s quieter roads as their ‘personal race tracks’.

The home secretary revealed one covidiot was clocked at 151mph on the M1 while another in London was racing at 134mph in a 40mph zone.

She said: ‘Police and fire (services) continue to put their arms around people and our communities by taking people shopping and taking prescriptions to the elderly.

‘Driving ambulances and supporting those in need throughout this difficult time – I’m immensely grateful to each and everyone of our emergency service heroes.’

Ms Patel also paid tribute to the South Yorkshire Police motorcyclist killed as he responded to an emergency earlier this week.

Pc Matt Lannie, 40, died following a collision in the Ecclesfield area of Sheffield on Tuesday as he responded to reports of a car failing to stop for officers, police have said.

South Yorkshire Police said he was responding to reports of a silver BMW failing to stop for officers at about 1pm on Tuesday when his bike was in a crash with a blue Toyota Avensis. 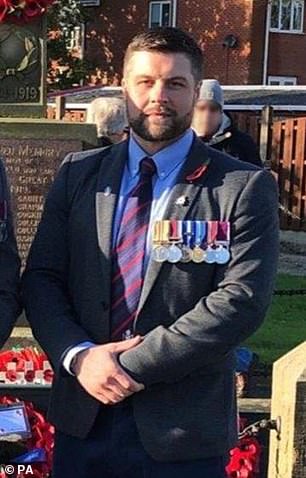 Ms Patel also paid tribute to the South Yorkshire Police motorcyclist Matt Lannie, who was killed as he responded to an emergency earlier this week

The officer was pronounced dead shortly after the crash on Nether Lane. The Toyota driver, 59, was taken to hospital with minor injuries, the force said.

Ms Patel tweeted at the time: ‘The saddest news. Deeply tragic & my thoughts are with the family of this distinguished officer.’

Police forces across England have also paid tribute to the officer.

At today’s government press briefing, Ms Patel said it was too early for the country’s coronavirus lockdown to be lifted.

She said the entire nation was grieving as it marked another ‘tragic and terrible milestone’ in the outbreak.

It came less than six weeks after the Government’s chief scientific adviser Sir Patrick Vallance said it would be a ‘good outcome’ if the number of deaths in the UK could be held below 20,000.

One expert suggested the numbers could now double that tally before the outbreak was brought under control in Britain.

Professor Stephen Powis, the medical director of NHS England who had echoed Sir Patrick’s original claim, insisted the social distancing measures the Government had put in place were having an effect.

However, he emphasised the difficulties in dealing with a new virus which had created a ‘once-in-a-century global health crisis’.

‘This was going to be a huge challenge not just for the UK, but for every country,’ he said.

‘Even in countries that have got on top of this early on, we are unfortunately beginning to see new infections.

‘So I think the first thing to emphasise is that this unfortunately is not going to be something we will begin to get over in the next few weeks.

‘This is something we are going to have to continue working our way through over the months ahead – as I have said before this is not a sprint, this will be a marathon.’ 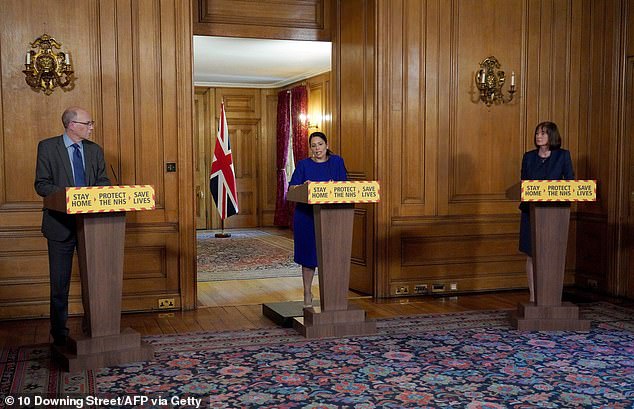 Professor Stephen Powis, the medical director of NHS England, insisted the social distancing measures the Government had put in place were having an effect

According to the latest official figures, a total of 20,319 patients had died in hospital after testing positive for Covid-19 in the UK as of 5pm on Friday – up by 813 from the previous day.

It meant the UK has become the fifth country to pass 20,000 coronavirus deaths, behind the US, Italy, Spain and France.

That figure does not include deaths in the wider community, such as in care homes, which means the true toll will be higher by several thousand at least.

Dr Paul Hunter, professor of medicine at the University of East Anglia, said the true figure could already be double that amount.

‘The World Health Organisation said yesterday that about half of all deaths in Europe are occurring in residence of elderly care homes,’ he said.

‘We know for a fact the figures reported every day are an underestimate, possibly a significant underestimate of the total number of deaths.’

The UK is well on track to hit 30,000 deaths in hospital, perhaps even 40,000 before the pandemic is brought under control, he said.

‘We are undoubtedly going to have one of the highest death rates in Europe,’ Dr Hunter added.