The Home Secretary sent another handful of migrants back to mainland Europe, but was hit by a flurry of 11th-hour legal challenges.

An immigration enforcement charter flight yesterday flew three Iranians, two Eritreans, an Iraqi and a Kuwaiti back to Germany after they crossed the English Channel. Two of them sailed across the Narrow Sea in September.

Yesterday’s flight also stopped in Hungary to deport five foreign criminals with a combined jail term of 20 years, whose crimes include robbery, Class-A drug dealing, theft and possession of a knife.

But the flight was once again bogged down in legal action that saw 20 scheduled deportees removed before the plane took off.

Ms Patel furiously said: ‘As the issues we faced yesterday show, our asylum system is broken. That’s why the new system I am introducing will be fairer and firmer.

Priti Patel today branded Britain’s asylum system ‘broken’ after 20 migrants were taken off a new deportation flight to Germany. The Home Secretary sent another handful of small boat migrants back to mainland Europe, but was hit by a flurry of 11th-hour legal challenges 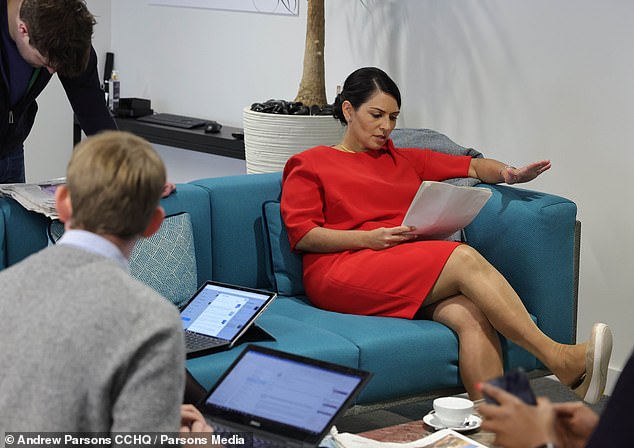 Ms Patel furiously said: ‘As the issues we faced yesterday show, our asylum system is broken. That’s why the new system I am introducing will be fairer and firmer’

‘It will be compassionate towards those who need our help, welcoming people through safe and legal routes.

‘But we will stop the exploitation of the broken system by those who come here illegally, asylum shop and make meritless claims to remain.’

A Home Office spokesman said: ‘The Government’s efforts to facilitate entirely legitimate and legal returns of people who have entered the UK through illegal routes are too often frustrated by last minute challenges submitted hours before a scheduled flight.

‘These claims are very often baseless and entirely without merit, but are given full legal consideration, leading to removal being rescheduled. This can effectively result in the timing out of a return due to stringent Dublin Regulations.

‘It is right that we seek to remove migrants who have travelled through a safe country and have no right to remain in the UK.’

The latest row comes after the Home Secretary blasted ‘do gooders and lefty lawyers and the Labour Party’ in her keynote speech to Tory conference this week.

Ms Patel vowed an end to people ‘taking our country for a ride’ by overhauling the ‘broken’ asylum system and cracking down on migrant crossings.

She pledged the ‘biggest overhaul in decades’ as she warned that the current arrangements are not ‘firm or fair’. 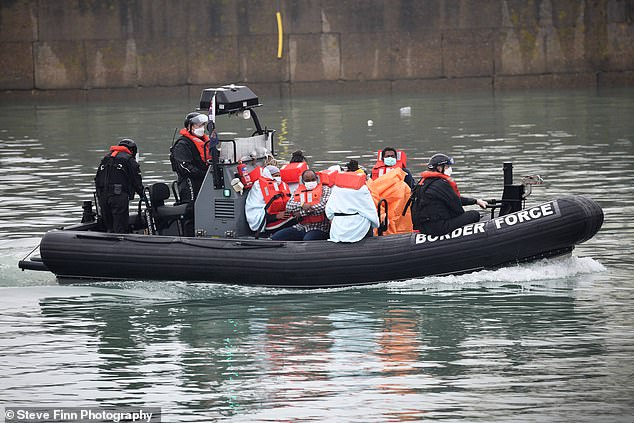 Yesterday’s flight also stopped in Hungary to deport five foreign criminals with a combined jail term of 20 years, whose crimes include robbery, Class-A drug dealing, theft and possession of a knife (pictured, migrants in a dinghy brought into Dover harbour in September)

The Home Secretary said that toughening enforcement and preventing abuse of the rules was the best way to ‘protect the vulnerable’.

The Cabinet minister also lashed out at Labour MPs berating her over her strong stance on law and order issues, saying she would not change tack just because she did not ‘conform’ to their idea of the views ethnic minorities should hold.

Ms Patel told the conference, being held virtually due to the coronavirus pandemic, that ‘do gooders and lefty lawyers and the Labour Party’ had to stop ‘defending the indefensible’ on asylum system.

‘We will protect those most in need and put the rights of those who respect the rules above those who take our country for a ride,’ she said.

The impassioned speech came after a furious row over the leaking of ‘blue sky’ ideas for reforming asylum arrangements and stemming migrant crossings.

Proposals have been floated including introducing a processing centre on Ascension Island, 4,000 miles away, and even using wave machines in the Channel.

However, government sources have insisted the ideas were only ever considered in brainstorming sessions, and complained that they are being leaked to damage ministers.

Ms Patel said that under the Conservatives the UK ‘has and always will provide sanctuary when the lights are being switched off on people’s liberties’.

‘A fair asylum system should provide safe haven to those fleeing persecution, oppression or tyranny,’ she said.

‘But ours doesn’t. Because our asylum system is fundamentally broken. And we have a responsibility to act.’

Ms Patel said: ‘From the expulsion of Ugandan Asians from a repressive regime, to proudly resettling more Syrian refugees than any other EU country, to supporting campaigners fleeing political persecution in Hong Kong.

‘Under Conservative leadership, the United Kingdom has and always will provide sanctuary when the lights are being switched off on people’s liberties.

‘So, I will introduce a new system that is firm and fair.

‘Fair and compassionate towards those who need our help. Fair by welcoming people through safe and legal routes.

‘But firm because we will stop the abuse of the broken system.

‘Firm, because we will stop those who come here illegally making endless legal claims to remain.

‘And firm, because we will expedite the removal of those who have no claim for protection.

‘After decades of inaction by successive governments, we will address the moral, legal, practical problems with this broken system. Because what exists now is neither firm nor fair.

‘And I will bring forward legislation to deliver on that commitment. I will take every necessary step to fix this broken system. Amounting to the biggest overhaul of our asylum system in decades.’

She said: ‘We will continue to hunt down the criminal gangs who traffic people into our country.

‘I will continue to use the full force of our outstanding National Crime Agency and intelligence agencies to go after them.

‘We will make more immediate returns of those who come here illegally and break our rules, every single week.

‘And we will explore all practical measures and options to deter illegal migration.’

Ms Patel went on: ‘As for those defending the broken system – the traffickers, the do gooders, the lefty lawyers, the Labour Party – they are defending the indefensible. And that is something I will never do.

‘And if at times it means Labour Members of Parliament attempting to silence me because I do not conform to their idea of what an ethnic minority woman should stand for. I will stomach it.

‘Because as Conservatives, we do not measure the depth of our compassion in two hundred and eighty characters on Twitter, but in the actions we take and the choices we make.’

Boris Johnson yesterday claimed Britain’s border policing is ‘hamstrung by what the Home Secretary would doubtless and rightly call the lefty human rights lawyers and other do-gooders’.