Priti Patel today vehemently denied a claim made by Dominic Cummings that the Government pursued a strategy of ‘herd immunity’ at the start of the coronavirus crisis.

Ms Patel said that was ‘absolutely not’ the case ahead of Mr Cummings’ bombshell evidence session with MPs on Wednesday this week on the Government’s handling of the pandemic.

Meanwhile, Dr Jenny Harries, the chief executive of the UK Health Security Agency, said she had ‘never been in any Government meeting where herd immunity was put forward at that point of the pandemic as a mechanism of control’.

Mr Cummings claimed in a series of tweets posted last night that the Government had originally intended to let Covid-19 spread through the community so that people could build immunity to the disease.

Boris Johnson’s former top aide said the strategy was only abandoned in early March last year after Downing Street was warned it would lead to a ‘catastrophe’.

Ms Patel was also grilled this morning on why India was added to the travel ‘red list’ after neighbouring Pakistan and Bangladesh but she risked confusion as she gave an unclear answer. 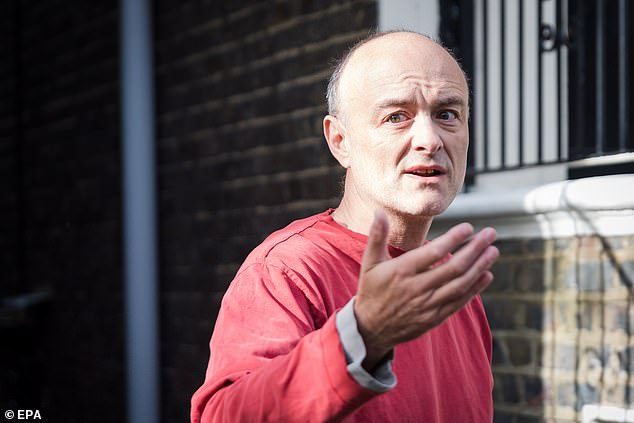 Mr Cummings’ latest intervention came as he prepares to give evidence to MPs on the Commons health and science select committees this week.

Downing Street is braced for a potentially highly damaging onslaught following his acrimonious departure from Number 10 at the end of last year.

Ms Patel was asked on the BBC’s Andrew Marr Show whether she could now admit that ‘herd immunity’ was the Government’s policy.

She replied: ‘Not at all, no. Absolutely not.’

Asked why Mr Cummings has said that it was the strategy, Ms Patel replied: ‘Well, I can’t speak for Mr Cummings and one individual.’

Ms Patel said the Government’s strategy ‘was always about protecting the public health, saving lives and protecting the NHS’ when she was asked whether she believes Mr Cummings could produce hard evidence to back up his claim.

‘I am not going to comment on what Mr Cummings is going to say or also what is being speculated about right now,’ she said.

‘I think it is important, and the British public will know this, we all remember the intensity of the pandemic when the pandemic hit last year and the decisions that were undertaken in government and by our prime minister, rightly so, collectively, he showed great leadership at a very difficult time, closing the economy down, locking the country down as well.

‘Big, big unprecedented decisions that were based on data and evidence and our strategy was always about protecting the public health, saving lives and protecting the NHS.’

Dr Harries, the former deputy chief medical officer for England, told the same programme: ‘I can categorically say I have never been in any Government meeting where herd immunity was put forward at that point of the pandemic as a mechanism of control.’

She added: ‘I haven’t been in any of those meetings, but bear in mind I would not have been in most of the high-level ones as the deputy CMO.

‘I think being really clear what we mean by herd immunity, what you’re looking at in a population is to try and see at which point your population would be safe, and this is what we do with this very successful vaccination programme that we have.

‘That’s not the same as saying, which I think has been misinterpreted in many places, that the aim would be to allow people to become infected and develop herd immunity.

‘That has never been on the agenda but you would always look to see how safe you can get your population through a vaccination programme.’

Mr Cummings said in his tweets that ‘herd immunity’ by September was ‘literally the official plan in all docs/graphs/meetings until it was ditched’.

In a BBC interview at the time, the Government’s chief scientific adviser Sir Patrick Vallance had said that if they tried to suppress the disease ‘very, very hard’ it would simply bounce back when restrictions were released.

Instead, he suggested the aim was to ‘build up some kind of herd immunity’ so more people were resistant to the disease and transmission was reduced.

But ministers have long maintained that ‘herd immunity’ was never the Government’s strategy.

Ms Patel was also questioned today on the timing of the Government’s decision to add India to the travel ‘red list’ amid growing scrutiny of how the Indian variant has spread across the UK.

India was added to the list on April 23 but neighbouring Pakistan and Bangladesh were put on it on April 9.

‘So people coming into the country were subject to upstream checks, being checked in terms of Covid tests and also having to quarantine as well. Our rules are very, very strict.

‘But of course, Andrew, we work with the data and we do know, of course, when it comes to positivity, variants of concerns, and the data, there is a lag, so we work with the system and that information was presented to ministers in the right way for the decisions to be made around red listing of all of the countries in particular.’