The Princess of Wales looked sensational in an Alexander McQueen coat as she arrived at the Rugby League World Cup Quarter final in Wigan this afternoon.

The mother-of-three, 40, opted for the £2,990 designer full-length piece of outerwear and a burgundy turtleneck to watch the England men’s team play Papua New Guinea at DW Stadium.

Styling her brown hair in her signature loose waves, the Princess finished off her chic ensemble with a woolen red poppy to show her support for the Armed Forces ahead of Remembrance Sunday and some £425 pearl earrings by UK designer Annoushka Ducas.

The bespoke coat is a staple in Kate’s wardrobe and she’s been pictured wearing it several times over the years – including a 2020 visit to a care home in Bath during the height of the pandemic.

Today is the first time Kate is watching a match in her capacity as the official royal patron of the Rugby Football League, after taking over the position from Prince Harry in February.

This year, the Rugby League World Cup has announced that the men’s, women’s and wheelchair competitions will all be staged alongside each other.

Ahead of kick-off, the Princess met key representatives of the World Cup’s Social Impact programme – which has secured over £25m investment since its launch in 2018 to increase opportunities for players from different backgrounds and promote positive mental health.

Styling her brown hair in her signature loose waves, the Princess (pictured on the pitch ahead of kick-off) finished off her chic ensemble with a woolen red poppy to show her support for the Armed Forces ahead of Remembrance Sunday and some pearl earrings. 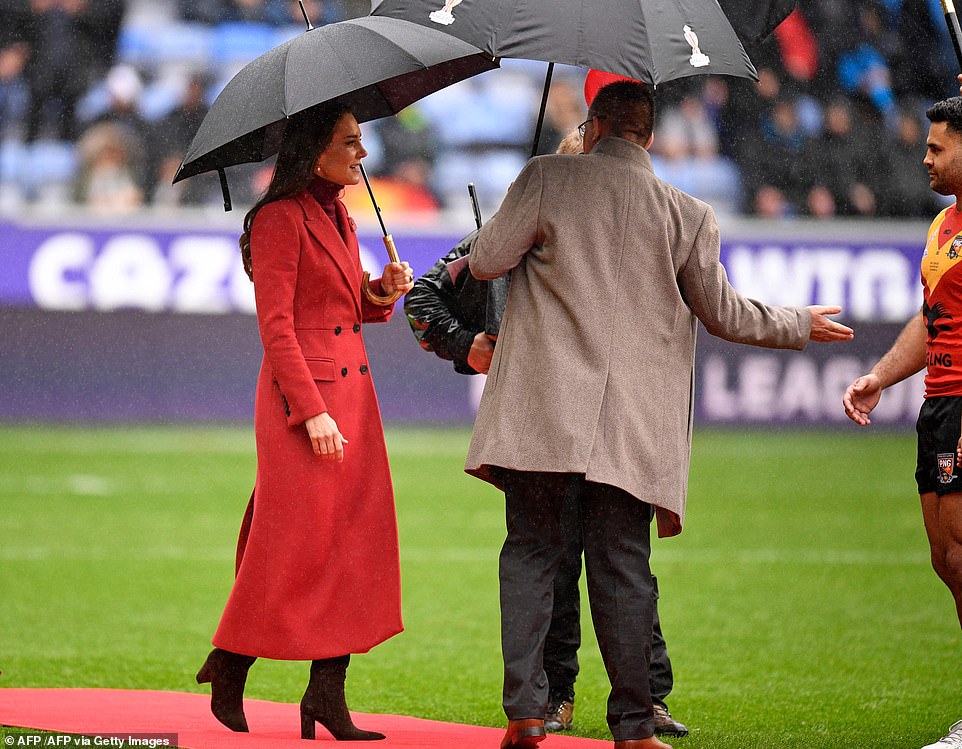 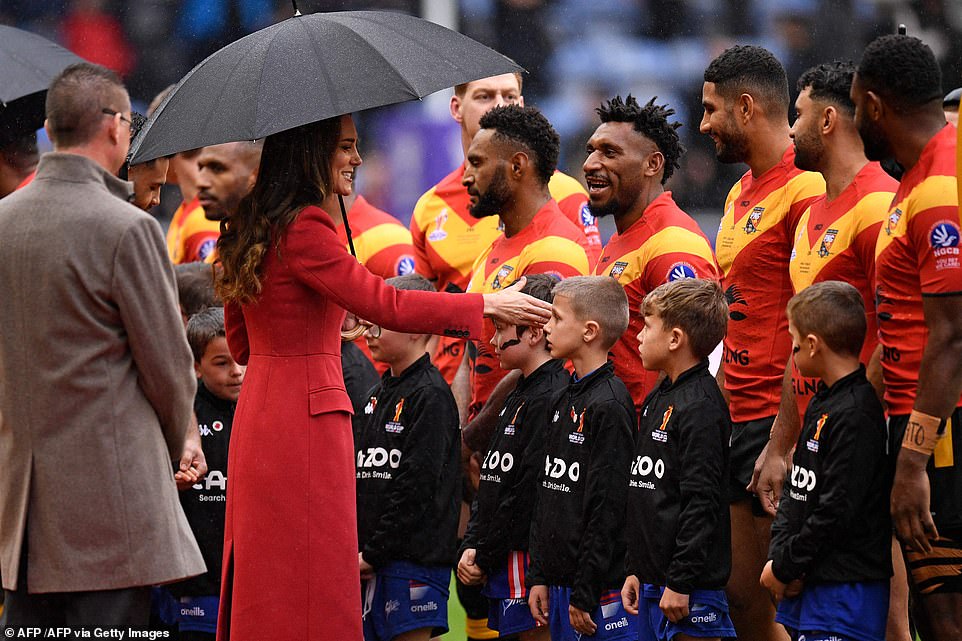 The mother-of-three was all smiles as she greeted players from both teams. She will also take part in a one-minute silence to mark Movember’s Mental Fitness Match Day 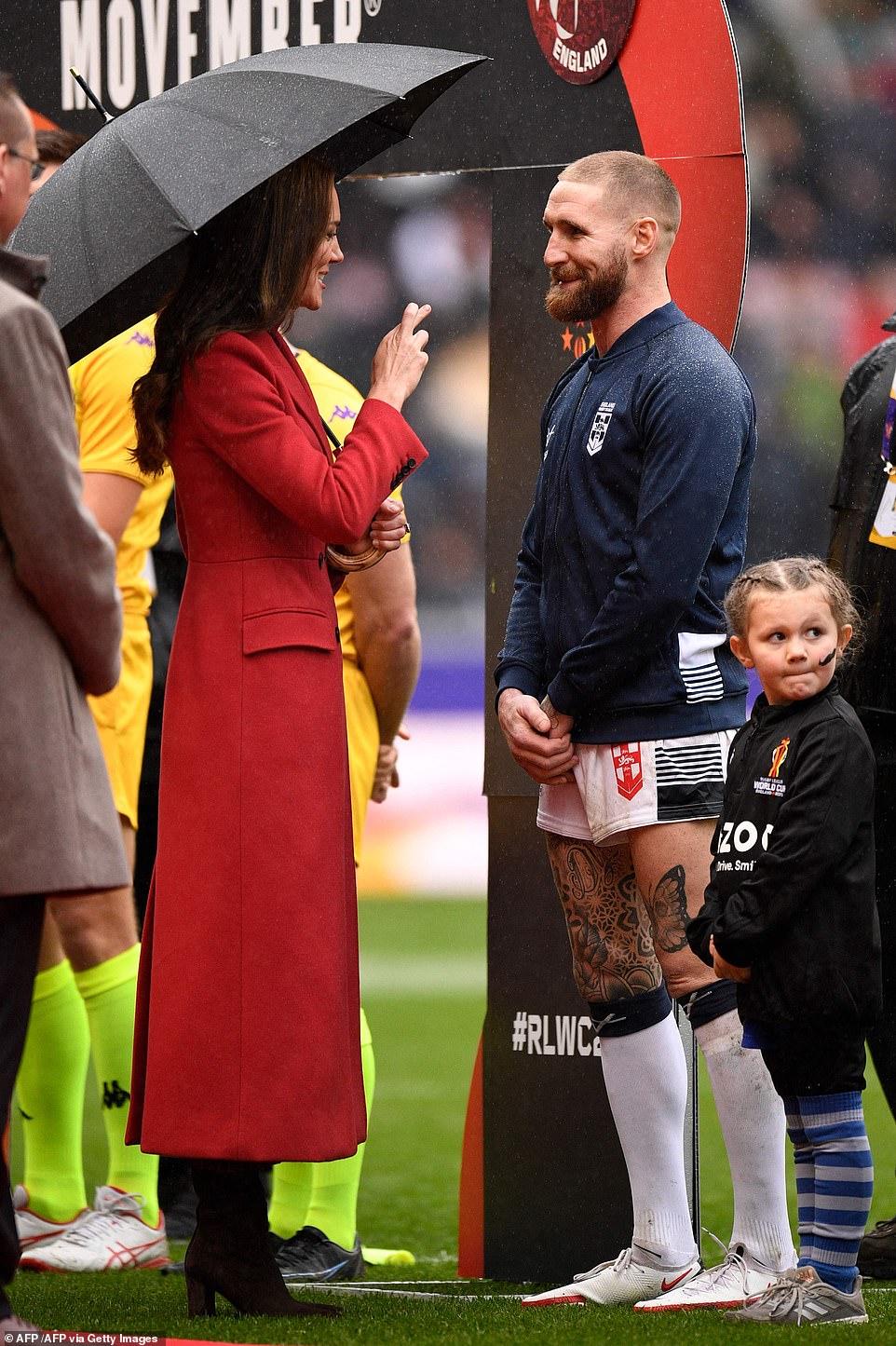 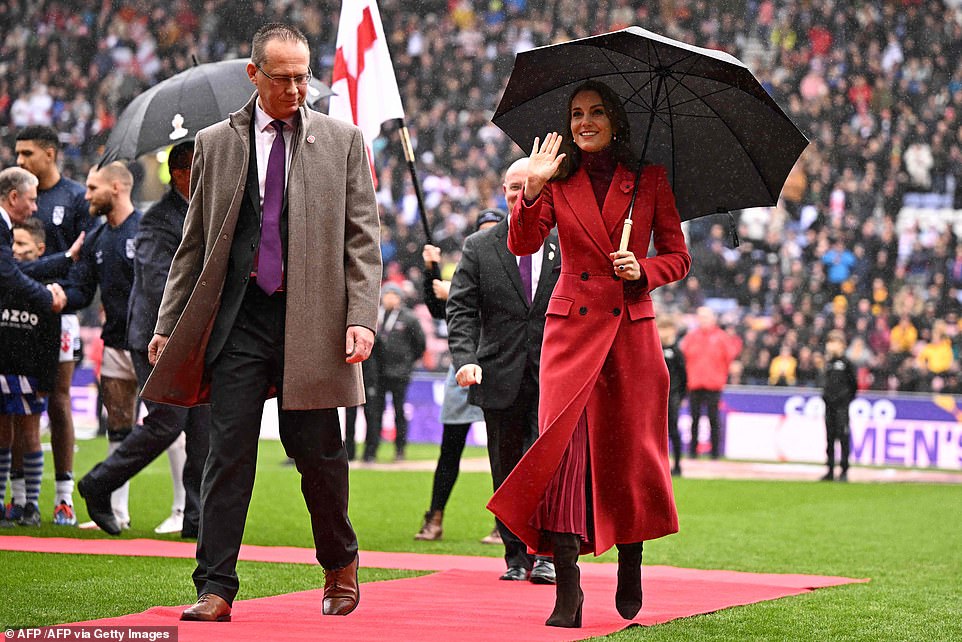 The mother-of-three wore a red pleated skirt and burgundy turtleneck underneath her Alexander McQueen wool coat. Pictured waving to crowds as she arrived on the pitch before kick-off 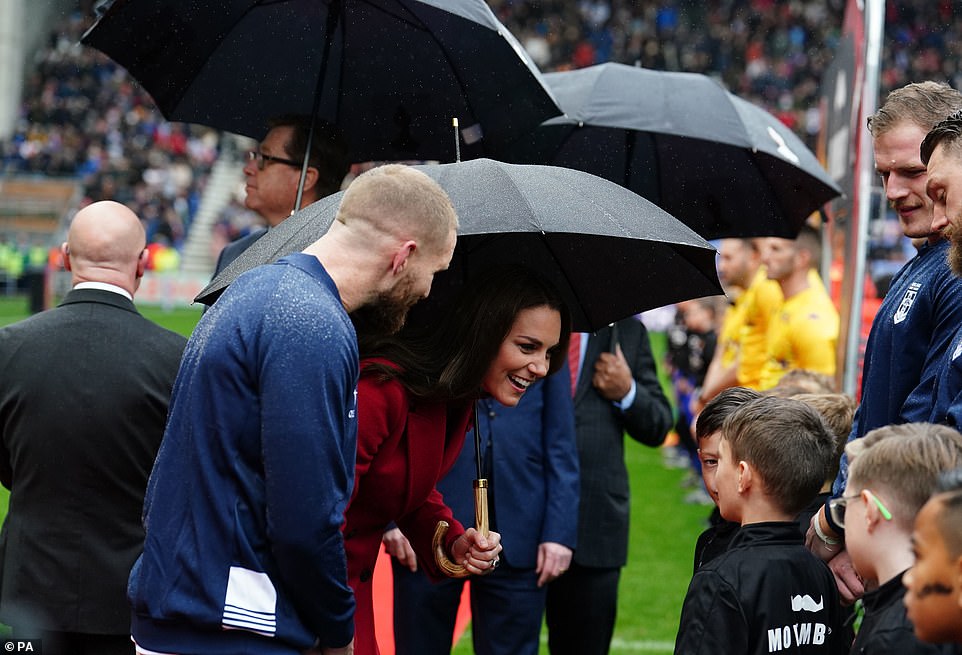 Today is the first time Kate is watching a match in her capacity as the official royal patron of the Rugby Football League, after taking over the position from Prince Harry in February. Kate – who has been dubbed the ‘Children’s Princess’ by royal fans thanks to her natural rapport with young people – pictured speaking with children wearing the Movember charity jackets 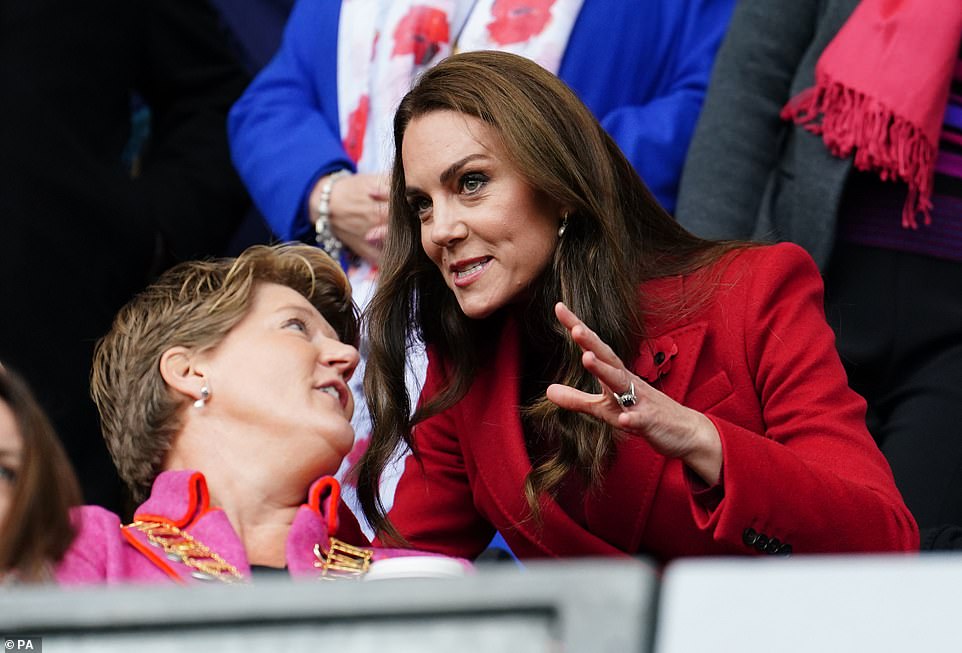 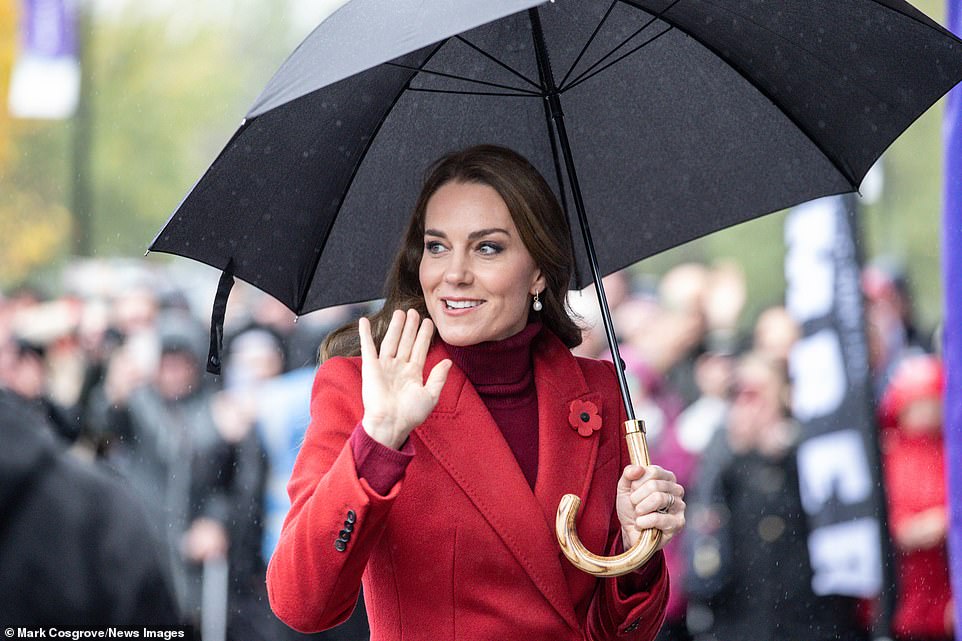 The Princess of Wales, 40, wore a red full-length red coat and burgundy roll-neck as she braved the rain at the Rugby League World Cup Quarter final in Wigan this afternoon 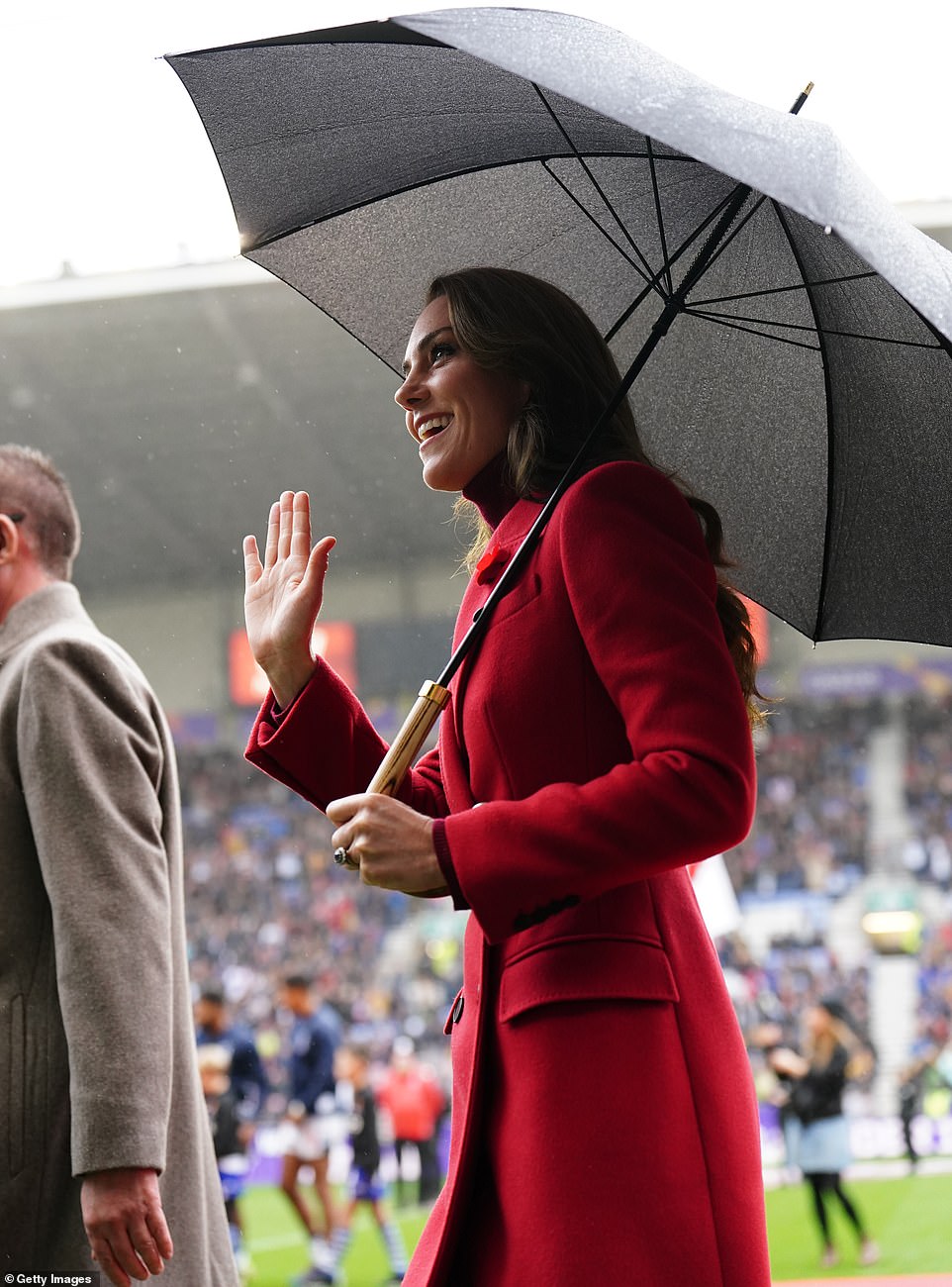 The Princess met players from the men’s England and Papua New Guinea teams on the pitch before taking part in a one-minute silence to mark Movember’s Mental Fitness Match Day.

The mother-of-three was all smiles as she spoke with players and appeared to tell England’s Sam Tomkins that she had her ‘fingers crossed’ for them.

Kate – who was dubbed the ‘Children’s Princess’ by royal fans last month thanks to her natural rapport with young people – also took the time to speak with children on the pitch who were there with the charity Movember.

Once the game got underway, Kate took her place in the Royal box where she was pictured speaking with BBC sports presenter Clare Balding.

During the half-time break, Kate will then speak with the women’s team – who triumphed Canada earlier in the day. 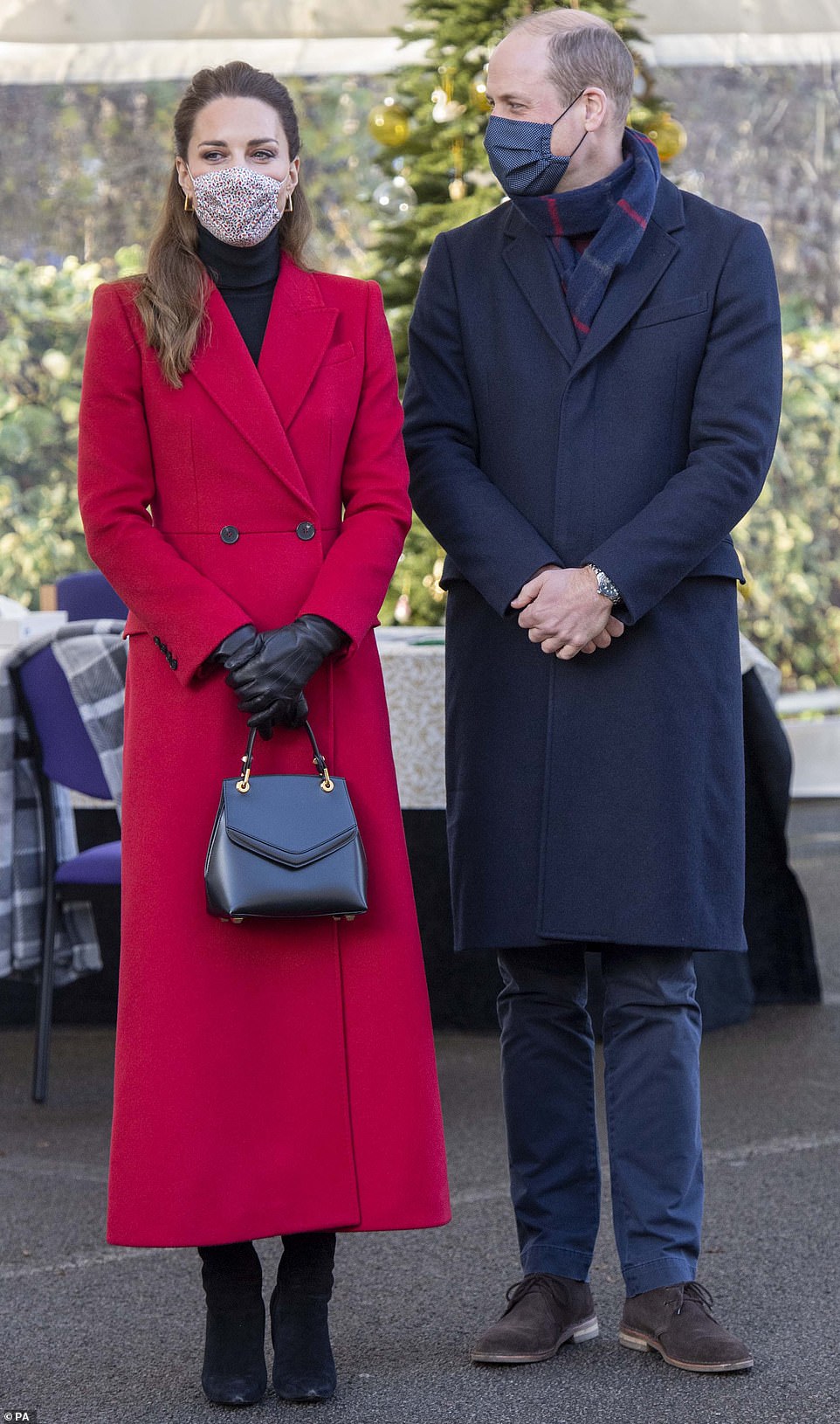 The mother-of-three, pictured wearing the Alexander McQueen coat while visiting a care home in Bath in 2020Pictured, with Prince William 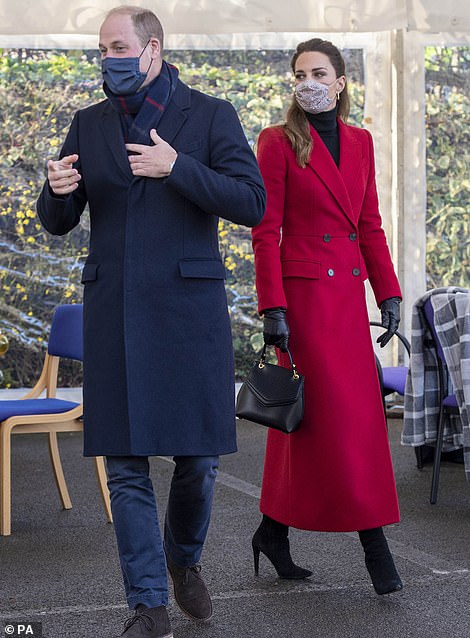 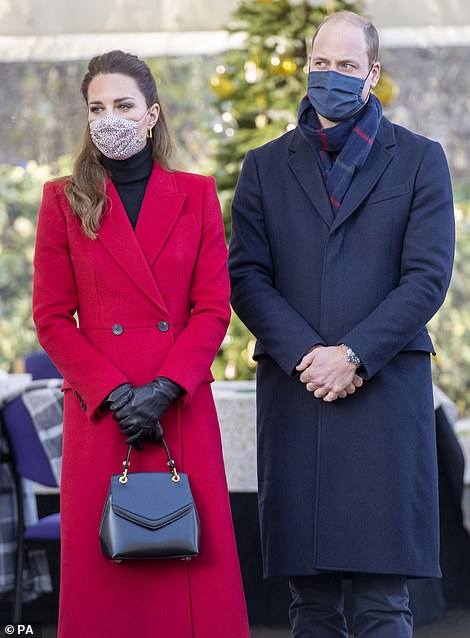 The couple (pictured left, and right) heard how the care home offers a broad range of activities which aim to promote independence by developing and maintaining and enhancing people’s skills, interests and abilities

The Princess has a keen interest in sport, playing tennis and hockey from a young age, and is a firm rugby supporter as well, watching England games with the Middleton family before her marriage to Prince William in 2011.

Earlier this month, Kate penned a supportive good luck message to teams ahead of the tournament’s start date.

She said: ‘I wanted to wish you the very best with your respective World Cup tournaments. I was so honoured to become Patron of the RFL earlier this year, not least because I know what an important moment this is for Rugby League.

‘The ability to take part in any World Cup tournament is incredible, but to be able to do so on your home turf, hosting teams from around the world and showcasing everything that this fantastic sport has to offer is truly special.’ 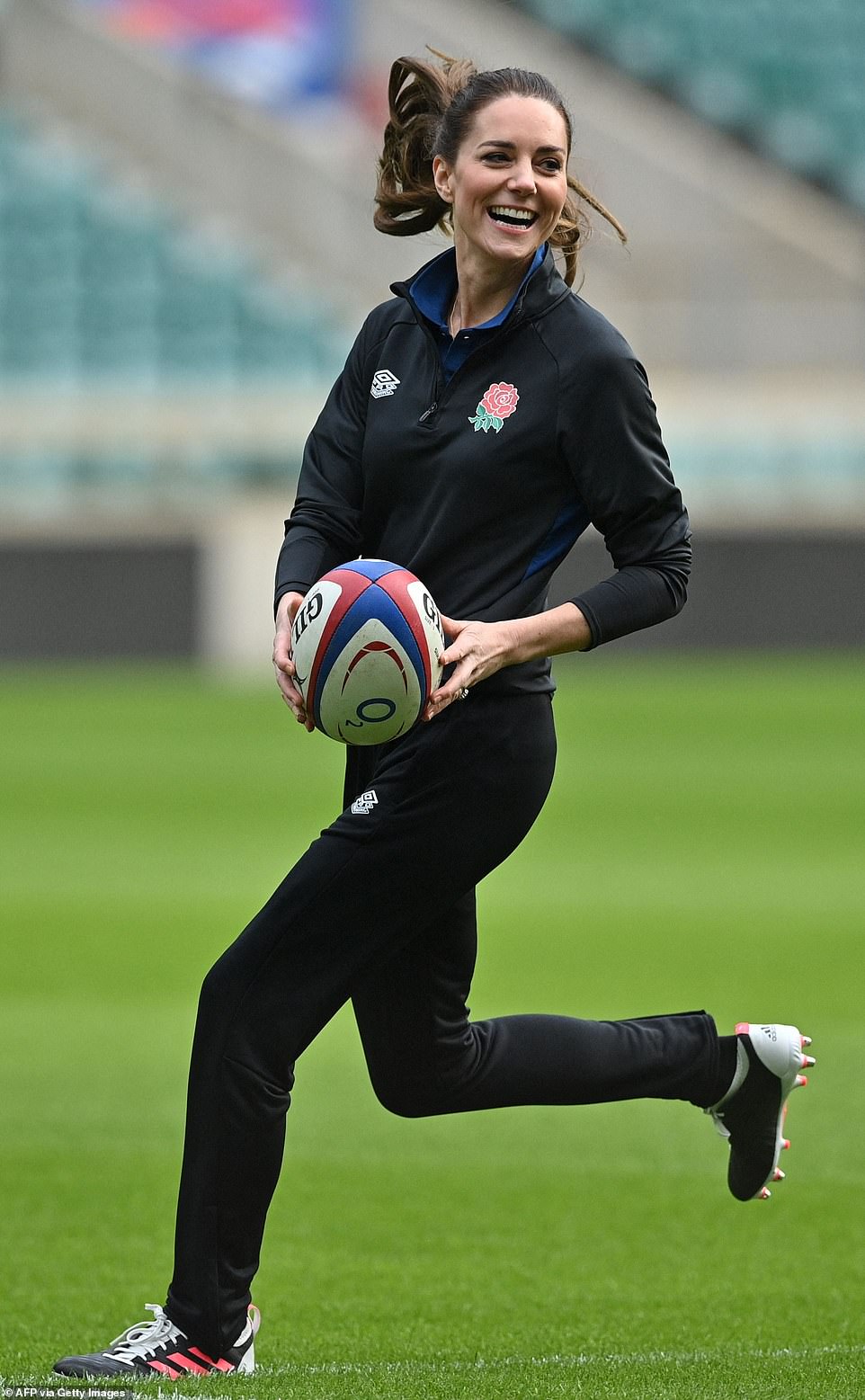 In her element! The Duchess, dressed head-to-toe in England Rugby kit, beamed as she joined players for a training session at Twickenham on February 2, 2022 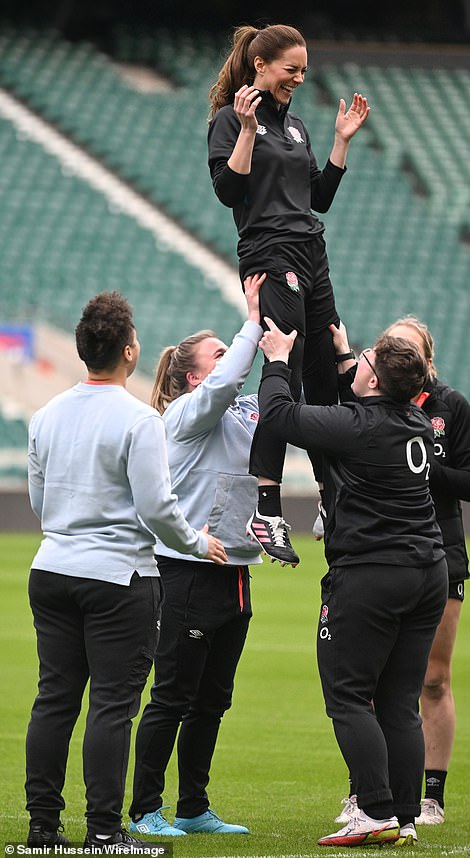 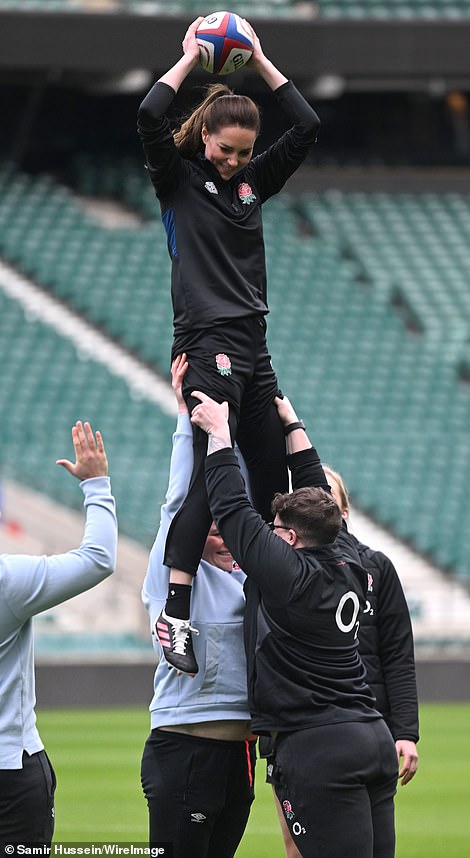 ‘I am also very proud that this will be the most inclusive Rugby League World Cup to date, with the men’s, women’s and wheelchair tournaments running alongside each other for the first time. We’re in for an amazing few weeks of rugby and I look forward to cheering you on all the way.’

She added: ‘I know that this has been a particularly long wait for you all, but I hope that the extra year has worked in your favor and that you are now even more prepared to take on the challenges ahead.

‘You have worked incredibly hard to get to this point and I have no doubt that your efforts will  inspire the next generation of Rugby League stars on the pitch.’ 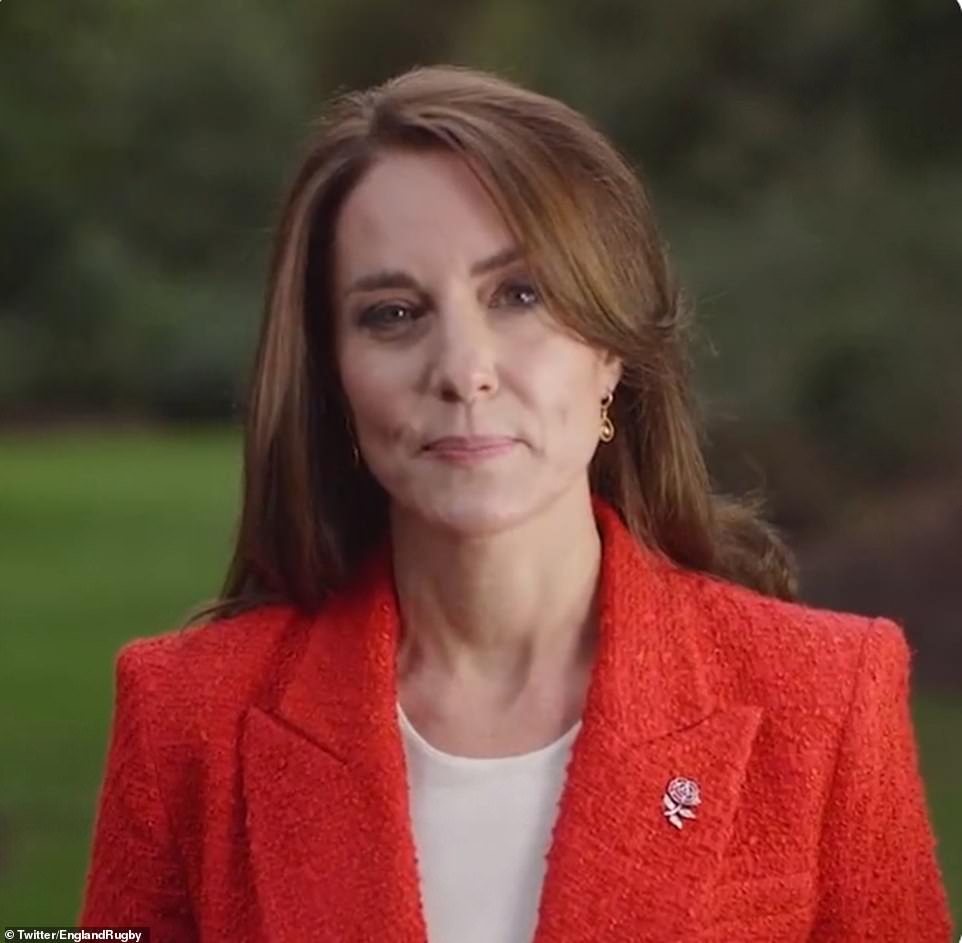 Earlier this month, the Princess said she’d be setting her alarm early to wake up in time for England Women’s rugby matches as they compete in the World Cup in New Zealand this autumn 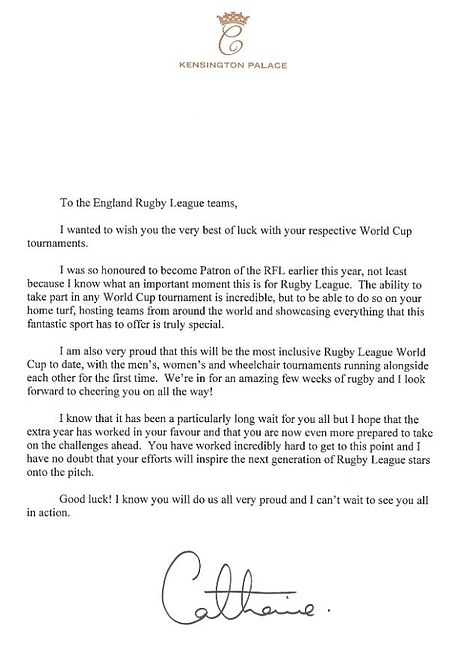 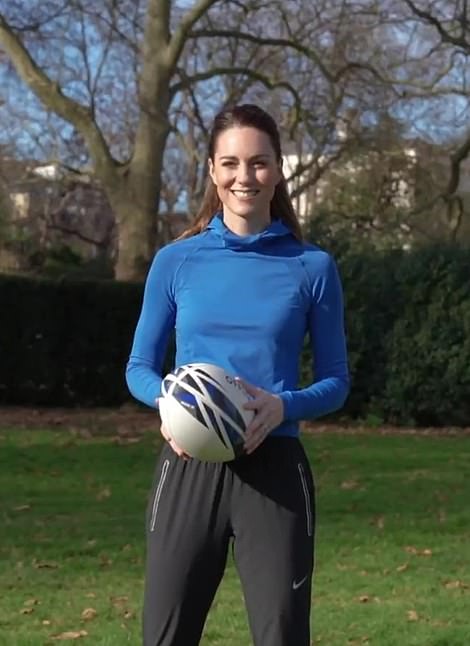 Left: The Princess of Wales said she ‘couldn’t wait’ to see the England Rugby League teams in ‘action’ in the weeks to come. Right: Kensington Palace released this photo of the then-Duchess of Cambridge when she was announced as the new patron of the Rugby Football League in February

Ever the keen sports fan, Kate attended the Wimbledon final earlier this year in her role as royal patron of the championship and got stuck into some rugby training with the women’s England team at Twickenham back in February.

Hours after she was confirmed as the Duke of Sussex’s replacement, sporty Kate donned official England Rugby £50 pants and £50 zip-up top as she joined England players for a training session at Twickenham.

Competitive Kate looked delighted to be stepping into her brother-in-law’s shoes and giggled, laughed and smiled her way through the drills, led by head coach Eddie Jones.

Wearing her hair swept back into a high ponytail, the mother-of-three was in her element as she tore across the pitch, joined in a scrum and even scored a try. 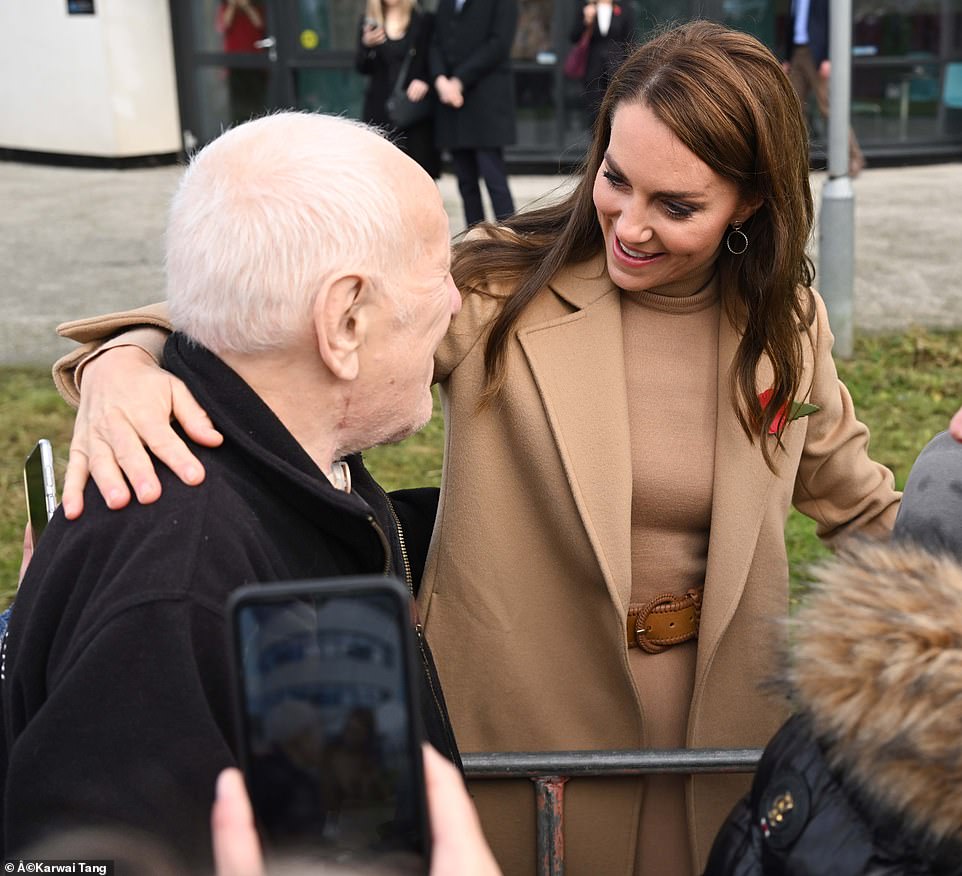 Sharing a smile! Meeting the gentleman’s eye and engaging him in conversation, the mother-of-three put her arm around him before smiling for the camera on Thursday 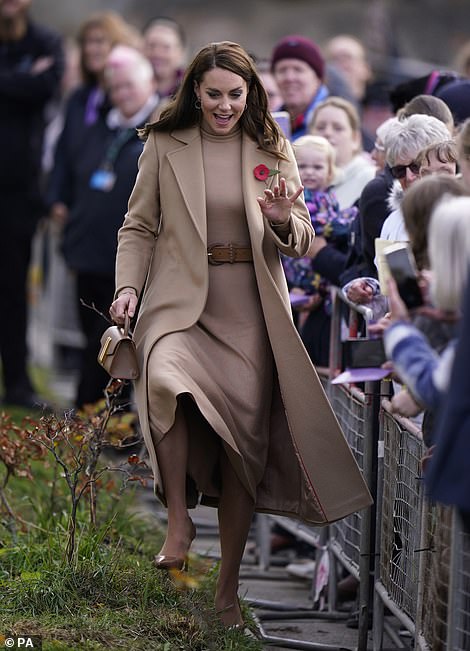 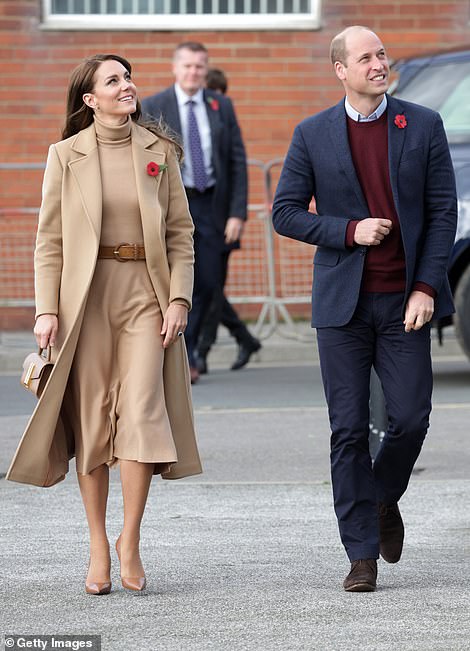 Tread carefully! Kate watched her step in her stiletto heels as she made her way along the grass by mental health hub The Street in Scarbough so she could continue to say hello to people on the other side of the gates (pictured left). Pictured right, William and Kate on Thursday

Today’s mental health efforts will no doubt be of great importance to the Princess.

In 2016, Kate launched the Heads Together foundation with Prince William and Prince Harry to end the stigma surrounding mental health struggles and has been a royal patron of children’s mental health charity Place2Be since 2013.

Earlier this week, the Prince and Princess of Wales visited the community hub The Street in Scarborough to learn about its mental health support system.

The duo were greeted by a cheering crowd – including one who flung his arms around Kate – as they started their day in the North Yorkshire resort to engage with local organisations who will benefit from funding which has been created from a collaboration between The Royal Foundation of The Prince and Princess of Wales and the Two Ridings Community Foundation.

During his first official visit to the seaside town, the Prince of Wales described how providing services throughout the community and talking are ‘crucial’ in dealing with the ‘mental health issues that many, many people face’.

After the tour, William told the donors, volunteers and centre-users: ‘We heard a lot upstairs about mental health priorities, safe spaces, places to go for young people after schools and food, these are particularly keen issues that seem to be resonating through the community today.

‘I think, particularly on the mental health side of things, tackling that stigma, talking about mental health and providing services throughout the community are crucial to how we go forwards and deal with mental health issues that many, many people face.’

Yesterday it was announced the Princess of Wales will host another Christmas carol service at Westminster Abbey this December, which will pay tribute to Her late Majesty Queen Elizabeth II. 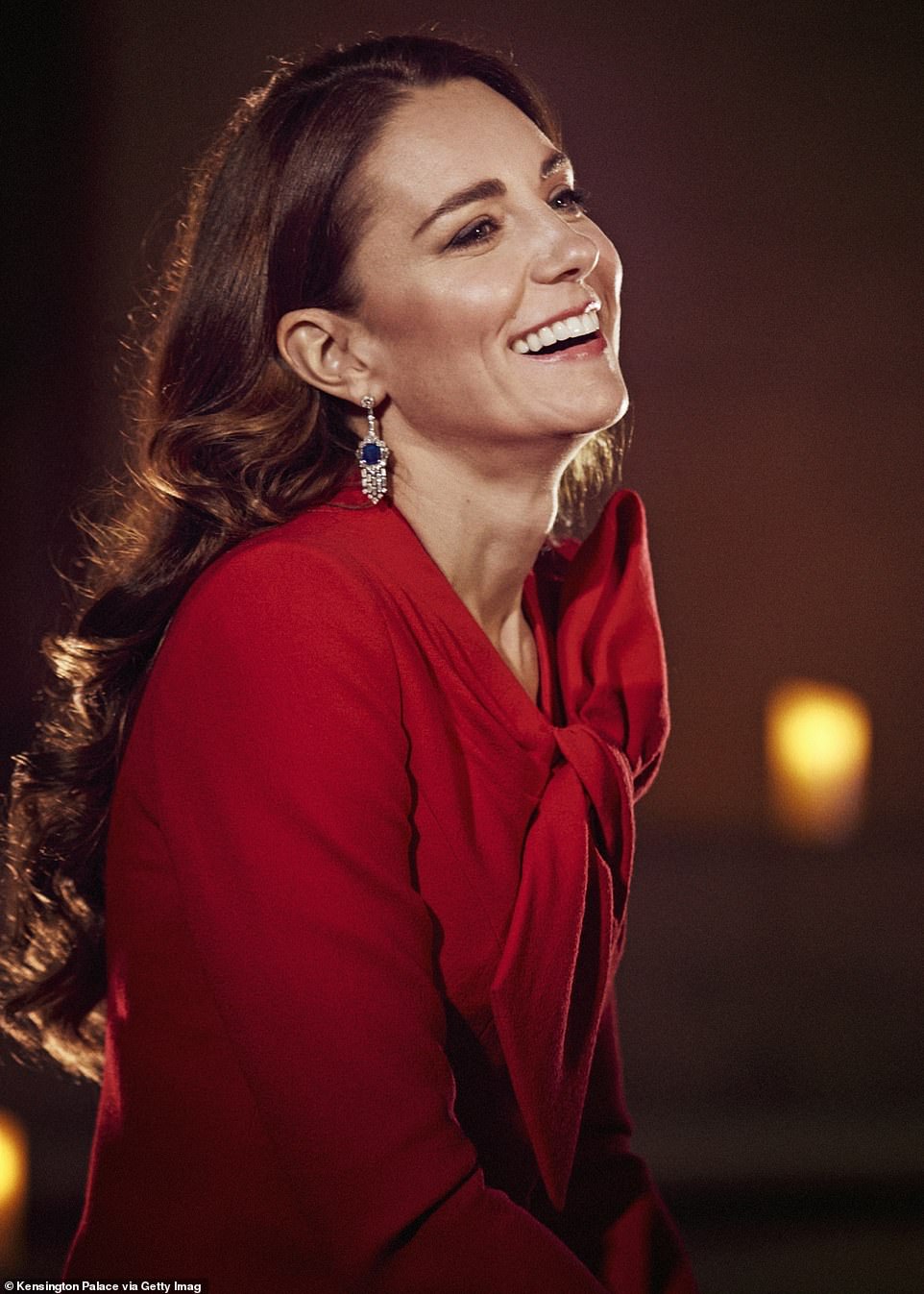 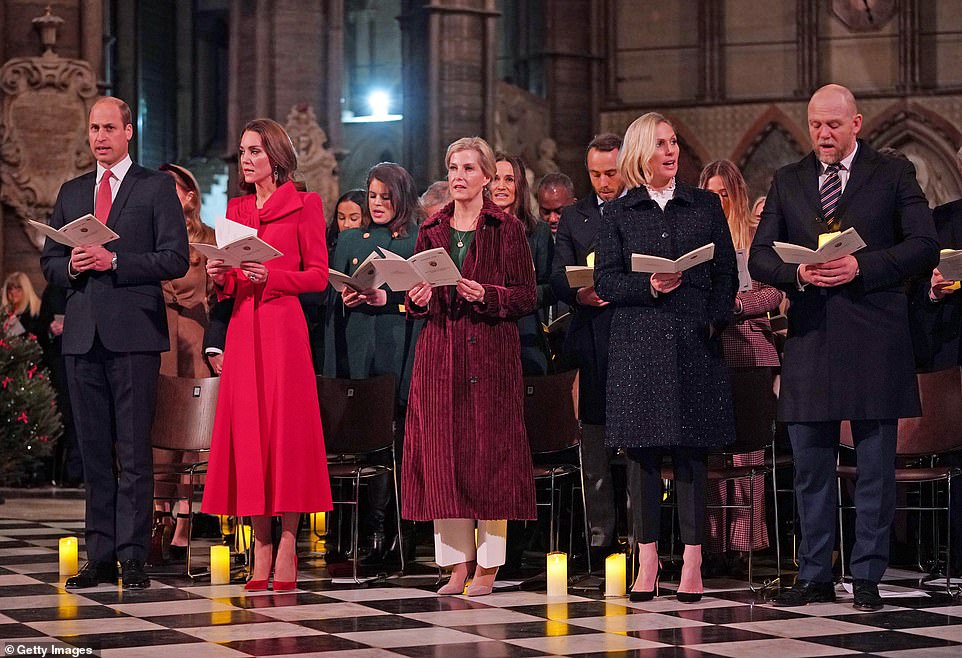 At last year’s event the Princess of Wales was joined by her husband Prince William, Sophie Wessex, and Zara and Mike Tindall

The service will be broadcast on ITV on Thursday 15 December, in what will be Kate’s first Christmas Carol service since she was given the Princess of Wales title.

The purpose of the service is to recognise selflessness among individuals and communities around the UK and highlight the importance of supporting others during difficult times.

The event, which is spearheaded by the Princess of Wales band supported by The Royal Foundation, will showcase the ‘joy’ of coming together in friendships and community events that support people in times of difficulty and loss.

It is designed to appeal to people of all faiths, as well as people who do not practice faith or religion.

Royal fans can expect to see members of the Royal Family attend the event as the late Queen is commemorated in a ceremony that will honour some core values she demonstrated throughout her life – including empathy and compassion.

To celebrate such values, some special guests will be invited to the Abbey in recognition of their efforts to help the people around them.