The Princess of Wales cuddled up with an adorable five-year-old girl displaced by war during a visit to a Ukrainian Community Centre in Reading today – before being presented with a piece of artwork which read: ‘Kate, I love you.’

Kate Middleton, 40, opted for her smart £460 camel Max&Co coat and a £279 polkadot LK Bennett dress as she arrived at the centre this morning, which is in the town where she was born, and was presented with a traditional Ukrainian cake.

During her visit, she took part in an art class alongside a number of Ukrainian children who had been helped by the centre, where she took one little girl onto her lap for a cuddle.

Elsewhere, she learnt about the extraordinary efforts being made to support Ukrainians in the UK by the centre and spoke with the centre’s volunteers.

The mother-of-three, who was pictured earlier this year fighting back tears as she visited a centre in London, last month held an audience at Buckingham Palace with Olena Zelenska.

Her visit today comes as it was revealed The Royal Foundation of The Prince and Princess of Wales convened a roundtable last week to offer support the First Lady’s mental health strategy, which was announced in August to address the impact the ongoing conflict is having upon the mental wellbeing of Ukrainians.

The Princess of Wales cuddled up with an adorable five-year-old girl during a visit to a Ukrainian Community Centre in Reading today – before being presented with a piece of artwork which read: ‘Kate, I love you’ 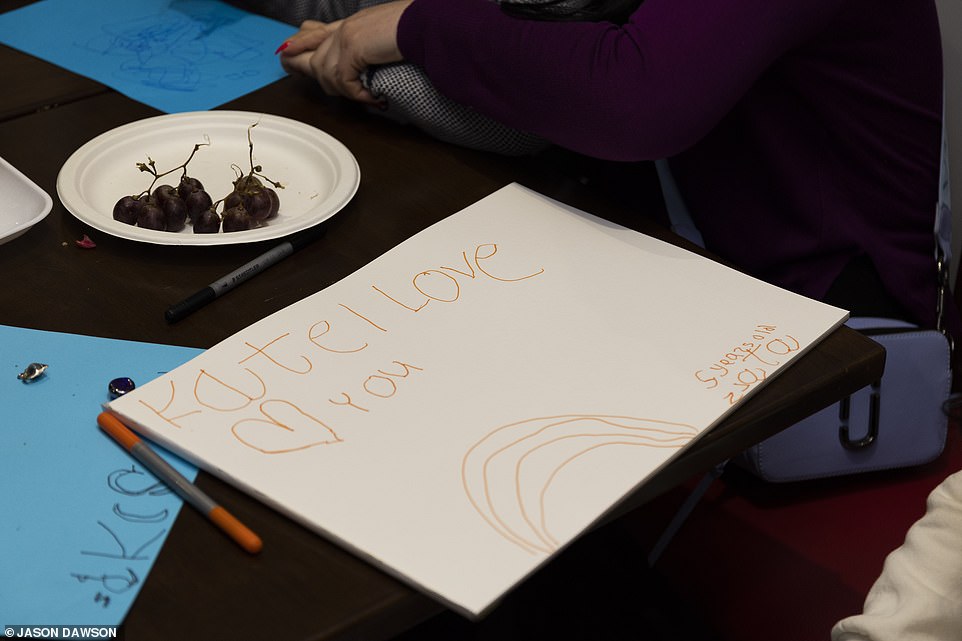 The royal mother-of-three was presented with the message and drawing, which appeared to show a rainbow, during an art class at the centre 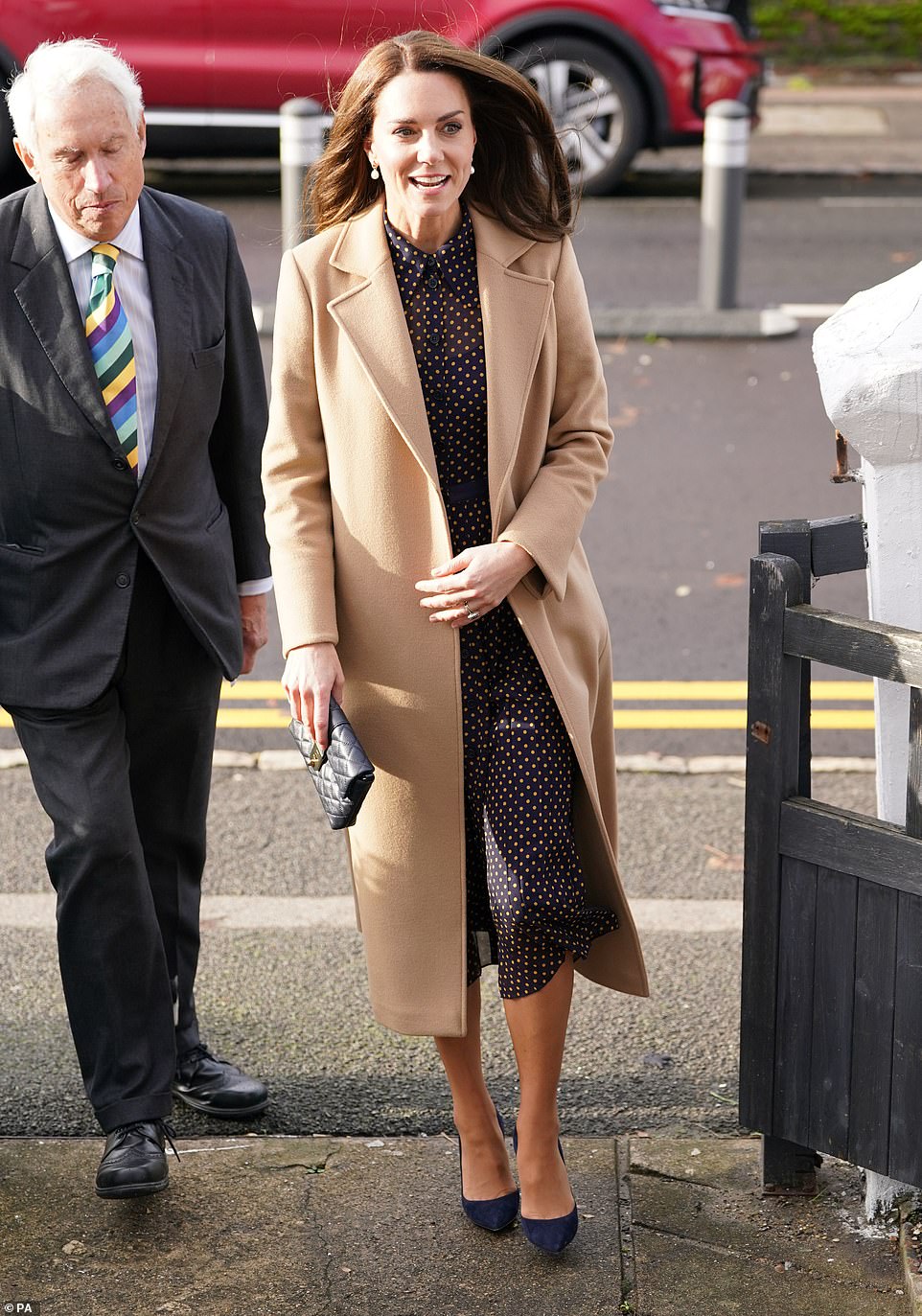 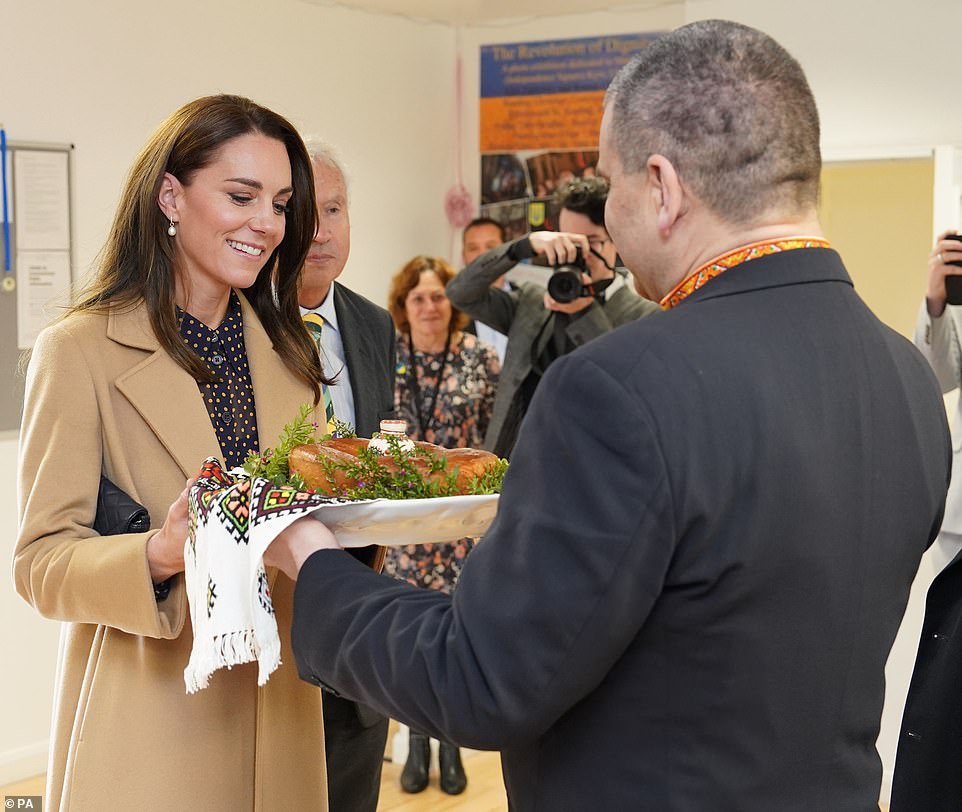 Kate was presented with a traditional Ukrainian cake as she arrived at the centre in Reading, the town where she was born, today

During the visit, the Princess swept her brunette locks behind her shoulder in her favourite bouncy blow-dry style.

The mother-of-three donned a pair of dangling pearl earrings for the outing.

Meanwhile she opted for neutral makeup for the occasion, wearing a sweep of dark eyeliner and a nude lipstick.

The camel coat, which Kate removed during her visit as she sat down to chat to volunteers, appears to be a favourite of the Princess, who wore it for a recent visit to Scarborough with Prince William. 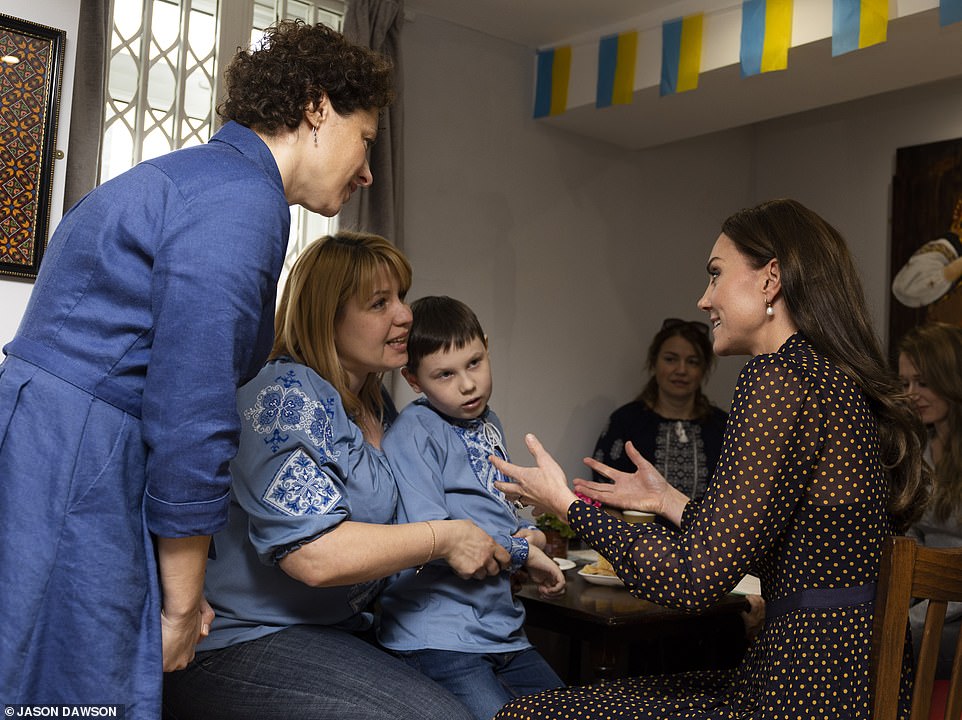 Elsewhere, the royal was animated as she spoke with fellow mothers who had been displaced by the Ukranian war and had received support from the centre 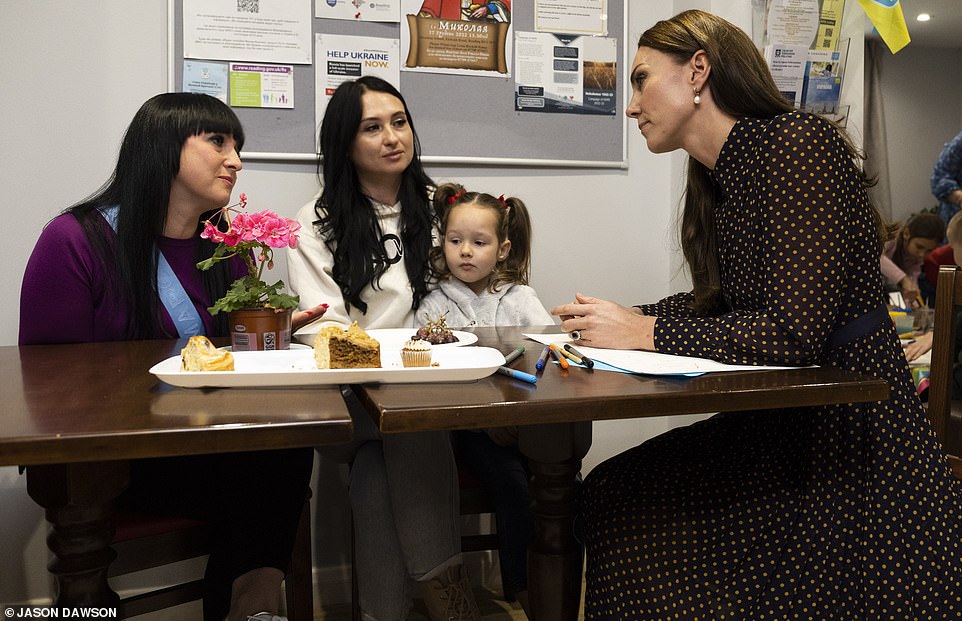 The Princess spoke with a number of different families during her visit to the centre in Reading earlier today, listening intently as they told their stories 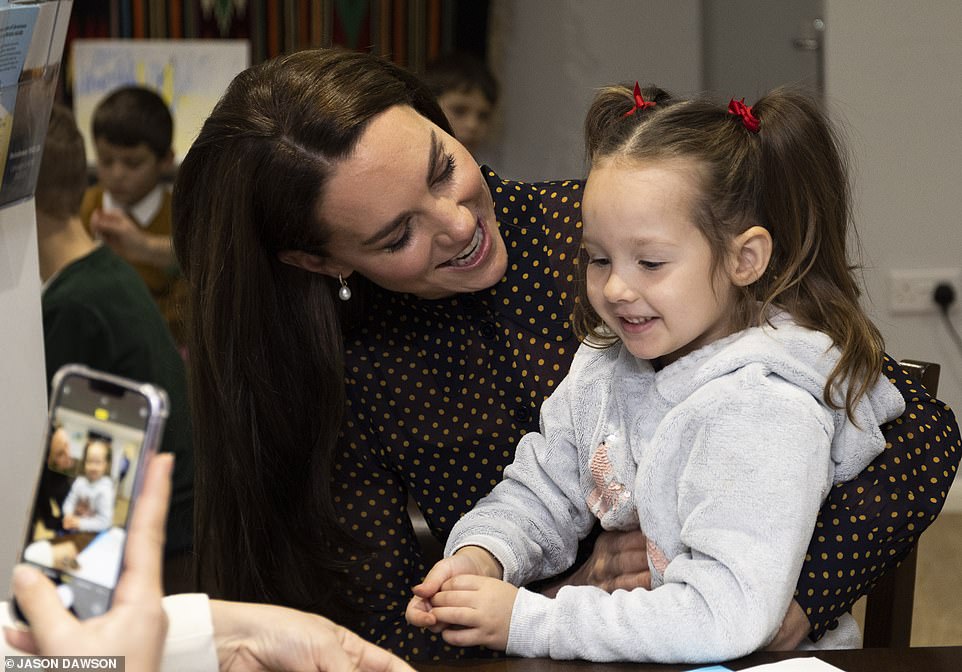 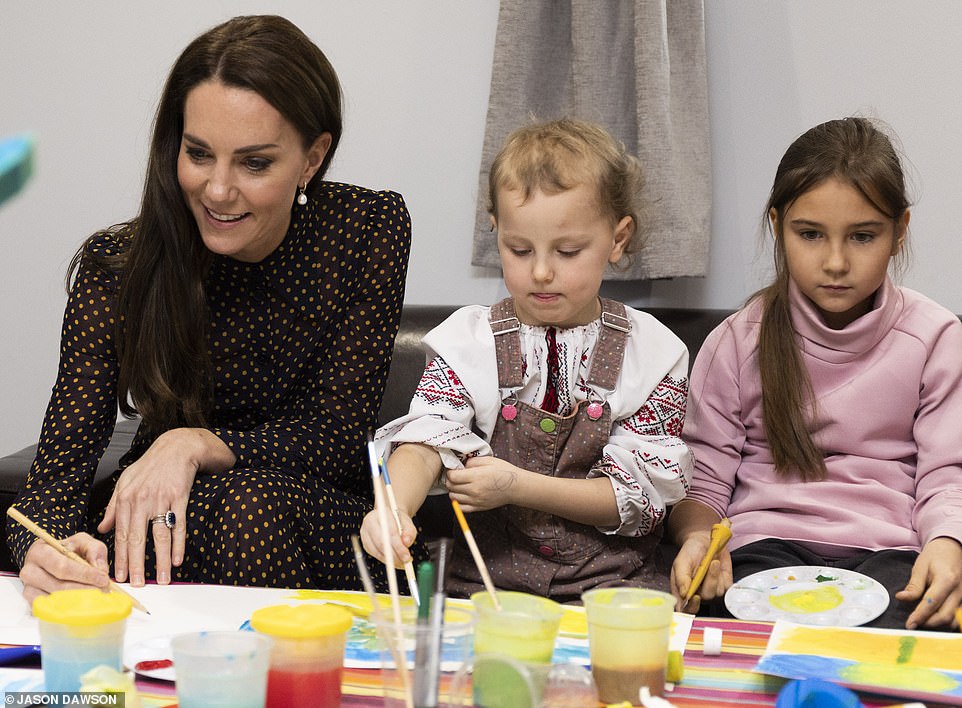 She opted for a smart polkadot shirt dress for the outing, which is described online as ‘a beautiful midi’ and an ‘elegant addition’ to any wardrobe.

It is crafted from a sheer, lightweight fabric with a navy blue and golden yellow spot print, with a long rounded collar, long sleeves, a nipped waist and a pleated midi skirt.

L.K. Bennett is a firm high street favourite of the royal, who regularly champions British brands and high street stores.

During her visit, Kate heard from the centre’s volunteers about how they have adapted their services in recent months, and how this has helped displaced families as they settle into life in the UK.

The Princess also met with families who are supported by the Centre to hear their stories, before joining children taking part in an art session.

Delivered on a monthly basis, the art workshops help to provide a way for the children to have fun, build friendships and express their emotions and experiences through a creative outlet. 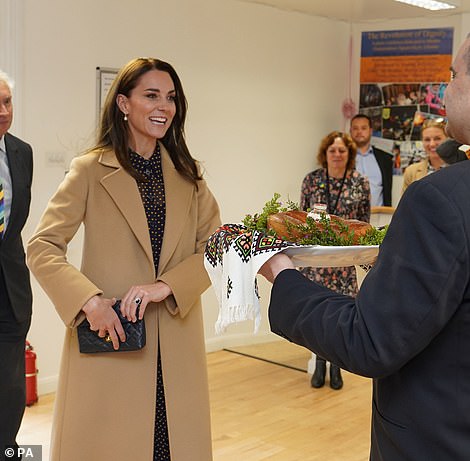 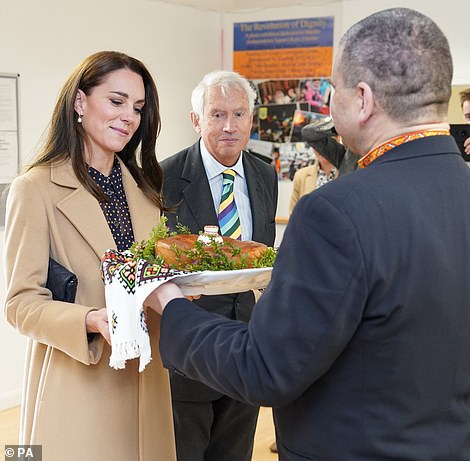 The royal was beaming as she arrived at the centre today, where she was presented with a traditional Ukrainian cake

During her visit, she will learn about the extraordinary efforts being made to support Ukrainians in the UK by the centre and meet with families

The Reading Ukrainian Community Centre houses the Berkshire branch of the Association of Ukrainians in Great Britain (AUGB), the largest representative body for Ukrainians and those of Ukrainian descent in the UK.

Since the start of the conflict in Ukraine earlier this year, the Community Centre has pivoted its activities to support Ukrainians arriving in the UK, whilst also delivering medical equipment and humanitarian aid to those on the frontline.

Work being carried out for the Ukrainian community in Reading has included the delivery of educational classes for children, and the implementation of weekly coffee mornings at the Centre to provide practical advice and support around topics such as employment and housing.

The sessions also help to establish and solidify social connections and a sense of community, which have been proven to be a vital foundation for positive mental wellbeing.

Kate’s visit follows a virtual roundtable meeting, convened by The Royal Foundation of The Prince and Princess of Wales, which took place last week to provide advice and share best practice to help support the First Lady of Ukraine’s mental health strategy, which was announced in August to address the impact the ongoing conflict is having upon the mental wellbeing of Ukrainians. 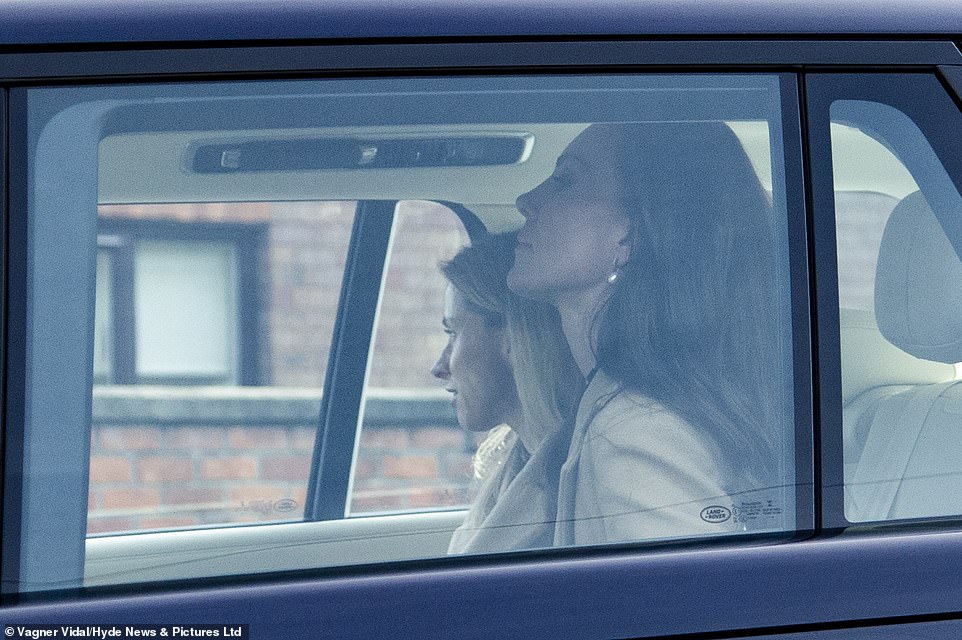 Bringing together experts and individuals working in the mental health sector in the UK, alongside representatives from the office of The First Lady’s and The Royal Foundation, the meeting covered a range of topics.

Discussions included learnings from the UK on changing conversations and reducing stigma on a national level, and lessons from the delivery of support for specific groups such as children and veterans.

The group also discussed the mental health support currently available for Ukrainians living in the UK.

The Royal Foundation plans to continue to provide advice and support for The First Lady’s work on mental health over the coming months.

Kate first met the President and First Lady of Ukraine in Buckingham Palace in September 2020 alongside her husband Prince William in their first audience since the start of lockdown.

In March, she appeared to fight back tears over the Ukraine crisis during a visit to the Ukrainian Cultural Centre in London, alongside her husband Prince William, who insisted: ‘We are all behind you.’

The then-duke and duchess, who revealed their eldest children have been questioning them about the conflict, brought trays of homemade chocolate brownies and granola bars with them from Kensington Palace to give to the members of the Ukrainian community and volunteers they met.

Further showing their support, both William and Kate sported pins showcasing the blue and yellow of the Ukrainian flag underneath a white love heart, while the Duke donned a navy suit and jumper for the outing in Holland Park. 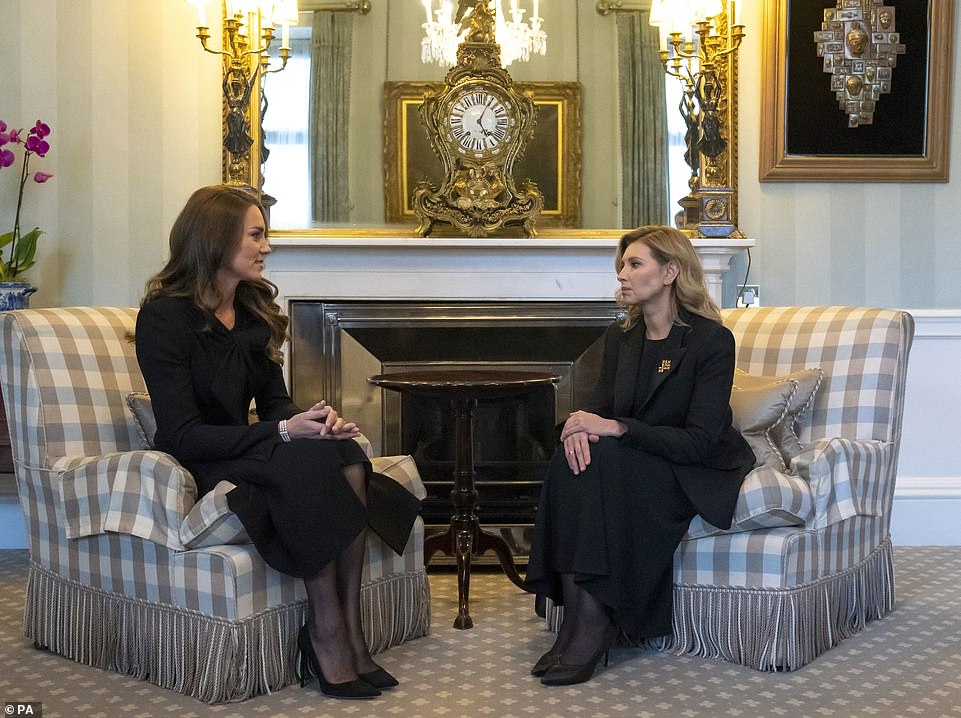 The wife of Ukraine’s President Zelensky, Olena Zelenska, spoke with the Princess of Wales at Buckingham Palace in September

The couple heard about the services offered at the centre, the incredible amount of donations they have received following Russia’s invasion of the country and the challenges they continue to face to get material aid where it’s most needed.

In September the wife of Ukraine’s President Zelensky spoke with the Princess of Wales for a second time after travelling from her war-torn homeland for the funeral of Queen Elizabeth.

The pair, both wearing long black dresses, sat either side of a fireplace on gingham armchairs with pink orchids on display in the background.

Meanwhile earlier this year, the Mail On Sunday revealed Kate’s parents wanted to welcome Ukrainian refugees into their Berkshire home.

Carole and Michael Middleton were understood to be examining plans to create an annexe at the manor house in the village of Bucklebury that they bought for £4.7 million a decade ago.

‘Bucklebury has housed a good number of refugees and Carole has been getting advice from villagers and seeking information about how the process has worked for others in the area,’ said a source.

Neighbours who had already provided sanctuary include broadcaster Chris Tarrant and Tory politician Lord Benyon, a friend of the Middletons who held a fundraising event for refugees at his stately home.

The source added: ‘Carole talked about wanting refugees to feel they have their own space in her home and has been talking about the logistics of how it all works. There have been a few conversations about this, back and forth.

‘Carole suggested she and some of those who are housing refugees should meet up, to get to know each other and because she wants to find a way to house refugees herself. She’s very philanthropic and wants to be known for her charitable nature as well as her business.’

Oone option under consideration was to convert a living room at seven-bedroom Bucklebury Manor into separate accommodation for a family fleeing Ukraine.

‘Carole doesn’t have many outbuildings and Kate’s security stay in the main house when they come, so she’ll have to find a way to make it work that is safe,’ said one Bucklebury villager att the time. ‘Carole is very popular here and she’s done wonders for the community and for the family farm. She’s a real tour de force.’

At least two million people have already fled their homes to escape the conflict, with four million expected to be displaced as the Russian invasion continues.