The Princess of Wales cut a sombre figure as she attended the Remembrance Sunday service in London today, alongside other senior members of the Royal Family.

Kate, 40, wrapped up warm in a black coat, which was adorned with three poppies, and a matching hat as she stood on the balcony alongside the Queen Consort, Camilla, 75, to watch King Charles, 73, and Prince William, 40, lay wreaths to pay respects to Britain’s war dead.

Charles placed a new poppy wreath incorporating a ribbon of his racing colours, with the design a tribute to the ones used by both his late mother and his grandfather George VI. Meanwhile Big Ben chimed eleven times at 11am, as it returned to service after years of maintenance and repair.

As Charles led the nation at the Cenotaph for the first time as King, the service was likely a poignant moment for the Royal Family. In a moving ceremony on Friday, the late Queen and her commitment to war veterans was remembered in an evening attended by members of the royal family including the Prince and Princess of Wales and Princess Anne.

The Princess of Wales cut a sombre figure as she attended the Remembrance Sunday service in London today, alongside other senior members of the Royal Family. Pictured, with The Queen Consort 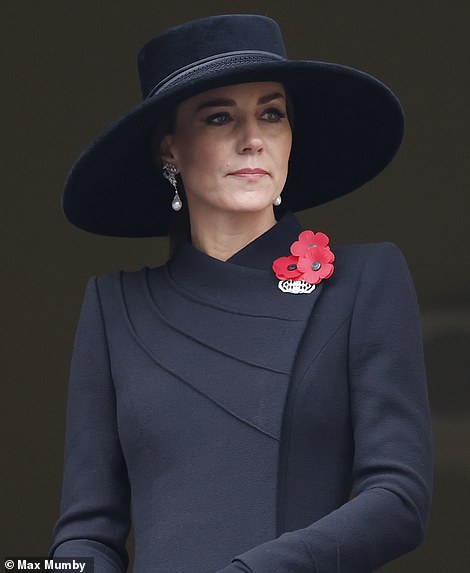 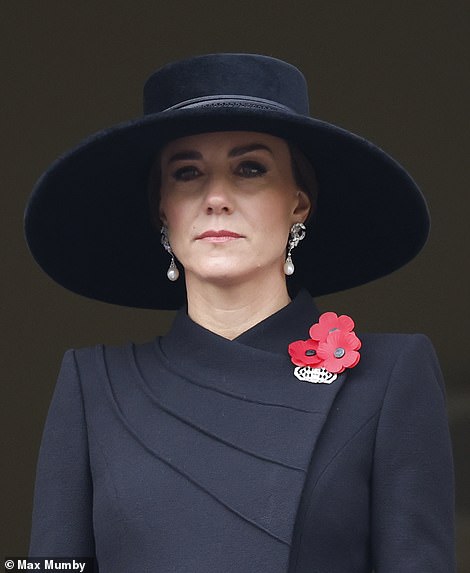 Kate, 40, wrapped up warm in a black coat, which was adorned with three poppies, and a matching hat as she stood on the balcony alongside the Queen Consort, Camilla, 75, to watch King Charles, 73, and Prince William , 40, lay wreaths to pay respects to Britain’s war dead 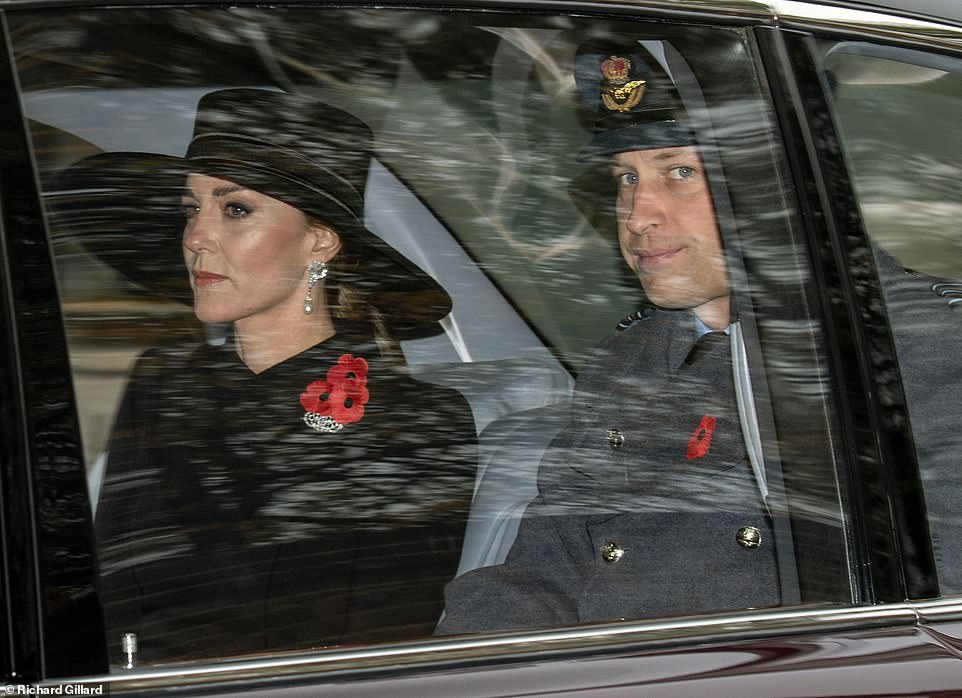 The Princess of Wales pictured arriving at the service with the Prince of Wales. Both appeared sombre during their journey 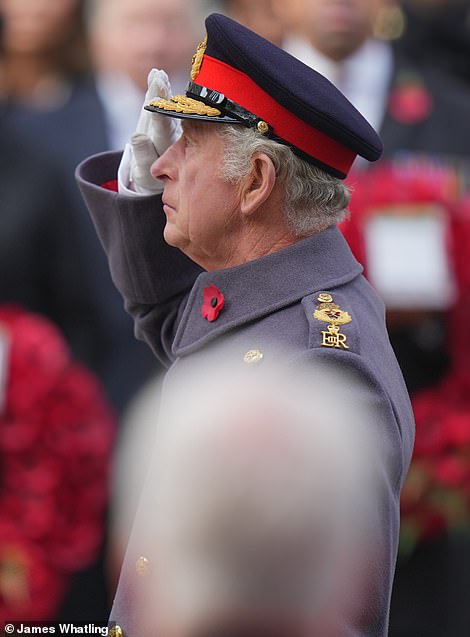 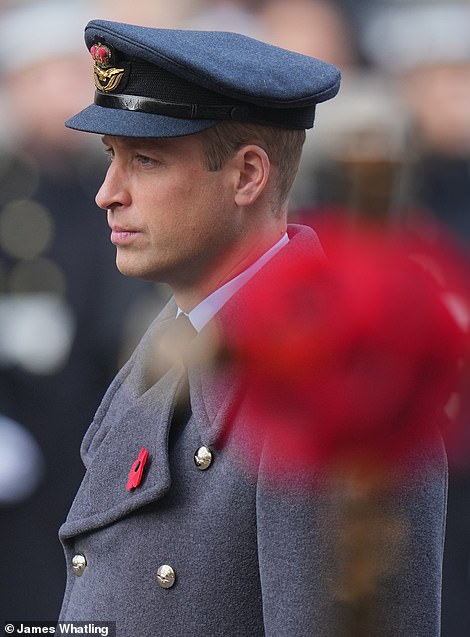 The King was clearly emotional as he stepped into the role the late Queen Elizabeth II counted as one of her most important public duties, pictured left. Pictured right: The Prince of Wales was the second person to lay a wreath at the Cenotaph, which bore the feathers of the heir apparent

At around 10:40am, the march past the Cenotaph paused temporarily while Scottish members of the UK’s armed forces, the Fourth Battalion of Highlanders, played the bagpipes, accompanied by drums.

At 10.58am, the military parade was brought to attention as King Charles III arrived. Big Ben rang eleven times to mark the beginning of the two minutes of silence, and a sombre hush fell over the crowd.

After the two minutes of prayer and reflection had ended, in an emotional tribute to those killed during the wars of the last century, members of the military played the Last Post.

King Charles III then laid his wreath and saluted to the Cenotaph on behalf of the nation. A wreath was then laid on behalf of Her Majesty the Queen Consort.

The Prince of Wales then proceeded to lay his wreath, complete with the feathers of the heir apparent. This was the wreath previously laid by his father. The wreath, bearing the colours of the Prince of Wales, also bears a brand-new ribbon in Welsh red.

The Earl of Wessex and Princess Royal then laid a wreath, before one was laid on behalf of the Duke of Kent. 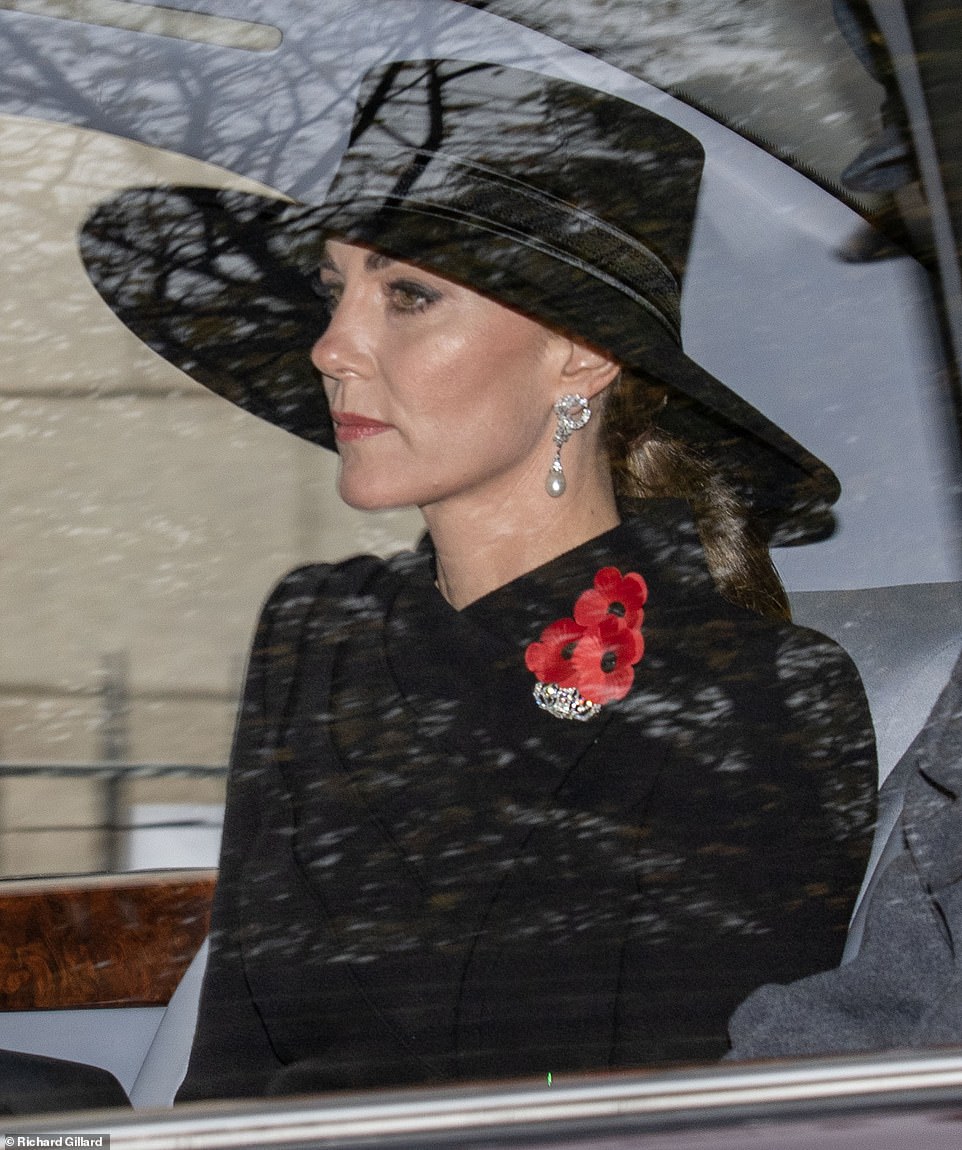 Kate, 40, wrapped up warm in a black coat, which was adorned with three poppies, and a matching hat as she arrived 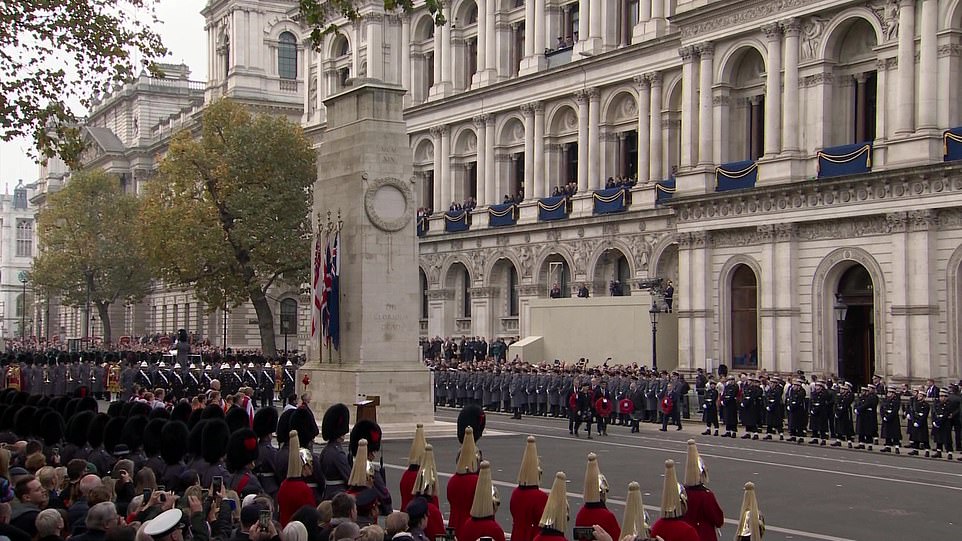 The Cenotaph in London, pictured moments before the arrival of King Charles III and the two-minute silence 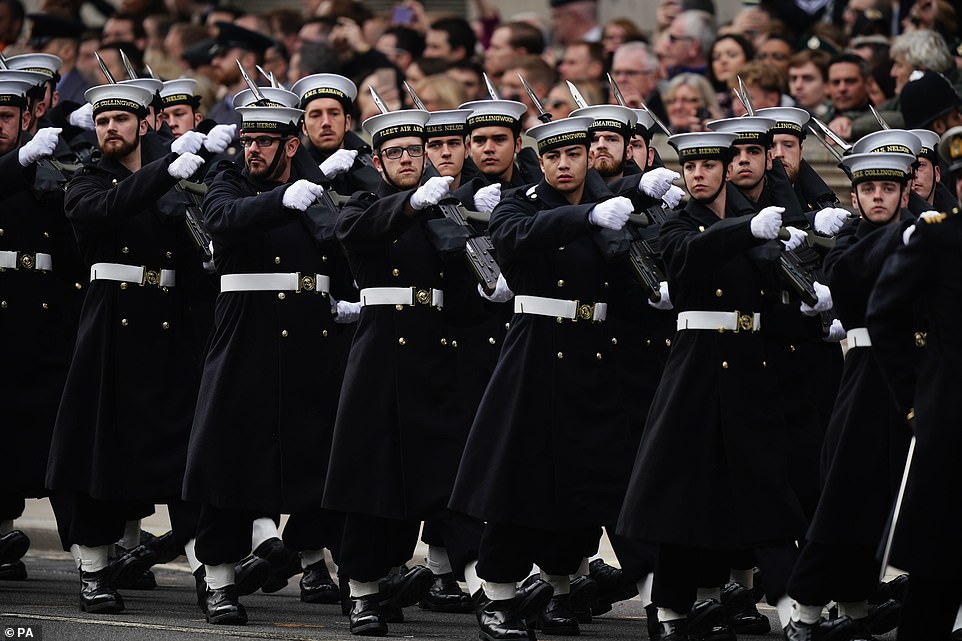 Some 10,000 veterans and military personnel are involved in today’s march, which ends at the Cenotaph 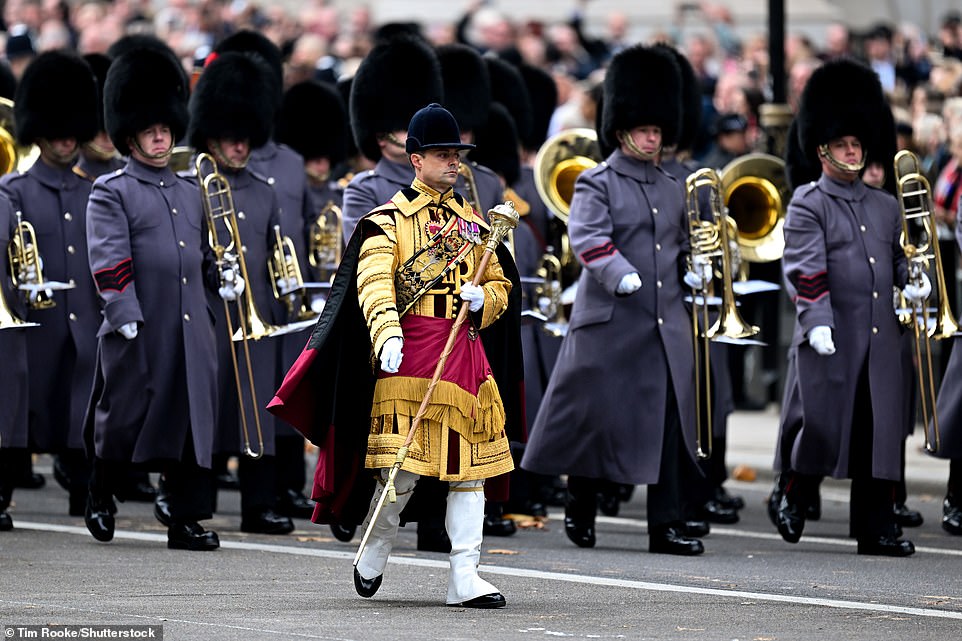 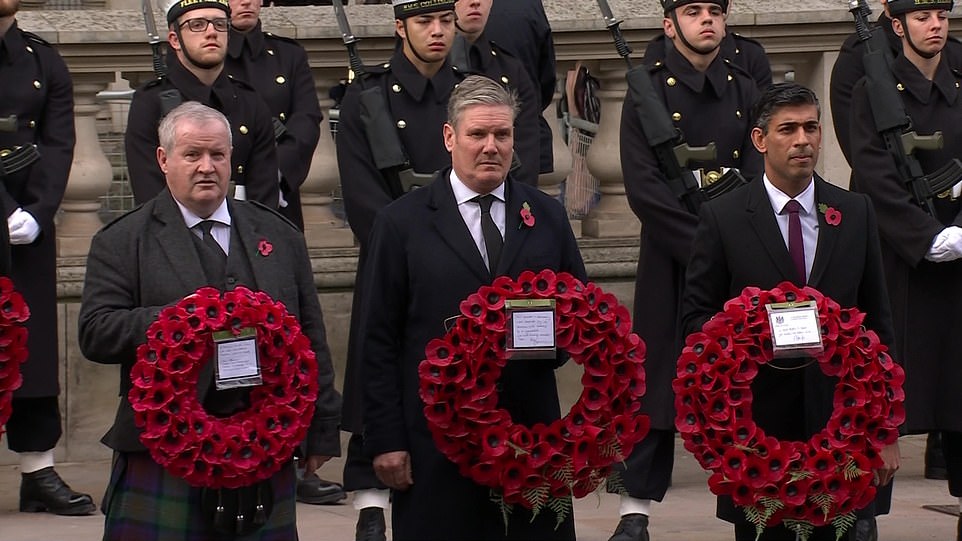 Ian Blackford, Keir Starmer and Rishi Sunak (L-R) hold their wreaths in preparation as they wait for the arrival of King Charles III 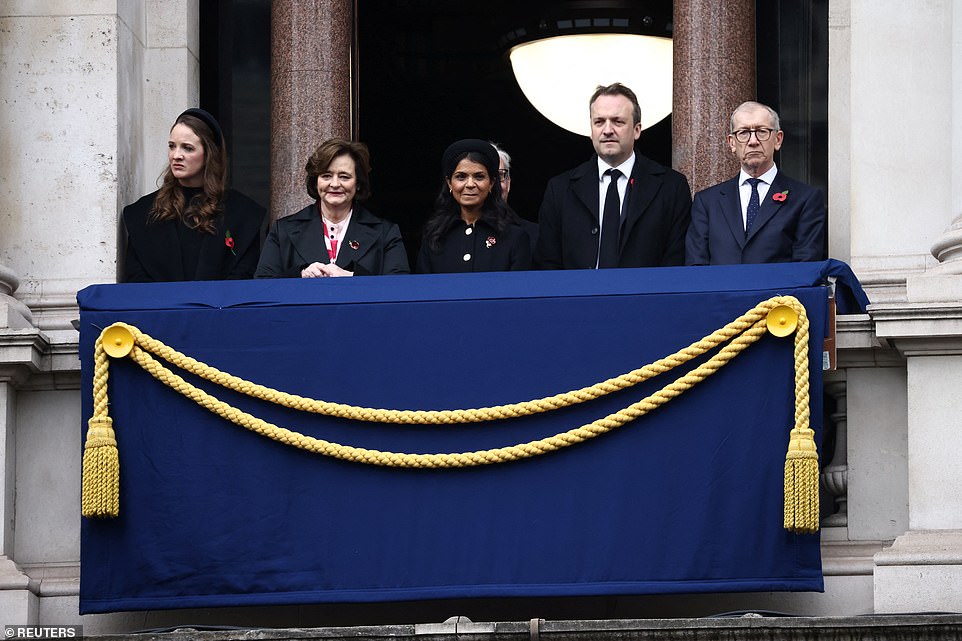 The military parade then stood at ease as music played and Prime Minister Rishi Sunak and Sir Keir Starmer led the rest of the wreath-laying. They were followed by leader of the SNP Ian Blackford and leader of the Lib Dems Ed Davey.

The service is being led by the Lord Bishop of London, Dame Sarah Elisabeth Mullally. She has held the role since 2018.

As well as the King and Queen Consort, many members of the royal family were in attendance this morning. This includes the Prince and Princess of Wales, Princess Anne and Prince Edward.

Numerous former Prime Ministers including Liz Truss, Boris Johnson, Theresa May, David Cameron and Tony Blair are also there, some of whom are laying wreaths at the Cenotaph.

The Queen, who died nine weeks ago at the age of 96, considered Remembrance Sunday, which commemorates the war dead, one of the most significant and important engagements in the royal calendar.

She first laid a wreath at the Cenotaph in 1945 when she was still a princess.  The nation’s longest-reigning monarch, who lived through the Second World War as a teenager and was head of the armed forces, only missed seven Cenotaph services during her reign, including in 2021 due to a back sprain.