The Princess of Wales looked radiant today as she beamed on her way to visit a nursery in Luton.

Mother-of-three Kate, 41, stunned in a turtleneck £1,600 red sweater and skirt combination from Gabriela Hearst and a £349 Massimo Dutti Limited Edition cashmere camel coat she first debuted in 2020 a chilly day as she arrived at Foxcubs nursery, where she has visited as part of her ongoing work into early years development.

The royal paired her outfit with knee-high black boots and wore her thick brunette tresses in bouncy curls cascading down her shoulders as she greeted staff members at the nursery with a handshake and commented on the ‘beautiful day’, before sitting down to play and chat with the children at the nursery.

It is Kate’s first royal outing as backlash against the Duke of Sussex’s memoir mounts, after the Iranian regime used Prince Harry’s admission he killed 25 Taliban fighters to justify the state’s execution of British-Iranian national Alireza Akbari, 61, this weekend.

The Duke of Sussex, 38, has come under fire from current and former British military commanders as a ‘stupid boy’ after writing about his time serving in Afghanistan in his explosive memoir and revealing he killed approximately 25 Taliban fighters whom he described as ‘chess pieces’.

And after the British government heavily criticised the Iranian regime for its execution of the British-Iranian dual national, Tehran said the UK was ‘in no position to preach’ on human rights following Harry’s claims.

The Princess of Wales, 41, donned a £1,600 combination top and skirt outfit from Gabriela Hearst as she arrived at the Foxcubs nursery in Luton today as part of her early years development work 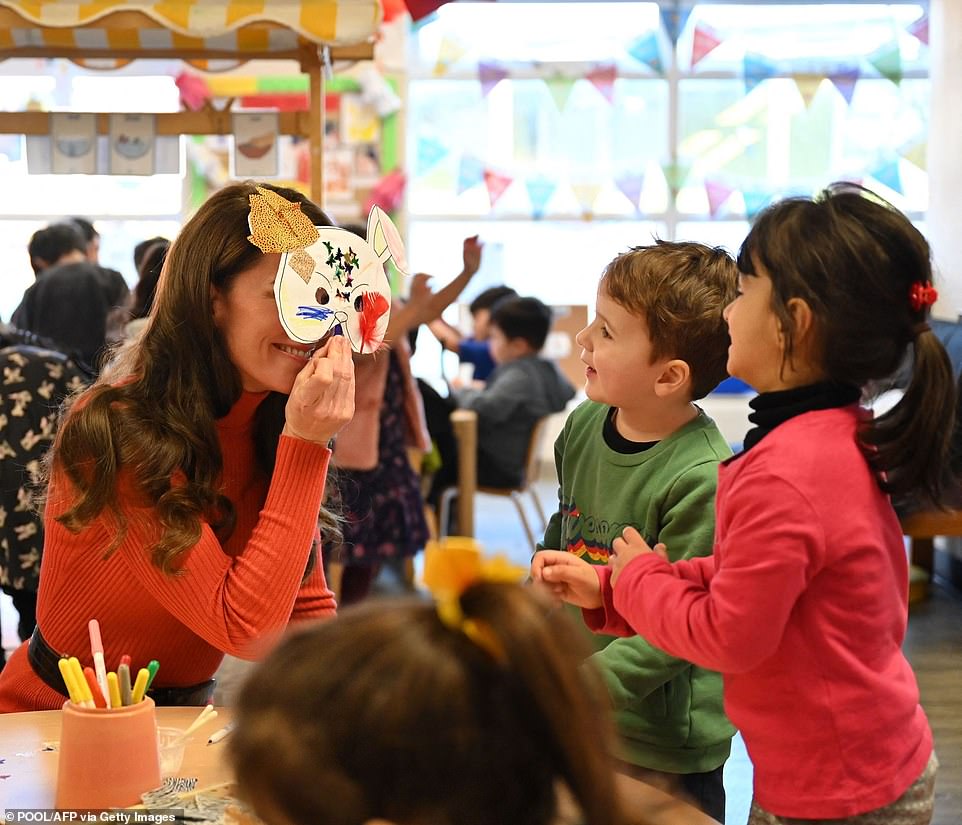 A work of art! The Princess of Wales delighted young children at the nursery as she held one of the bunny mask creations up to her face 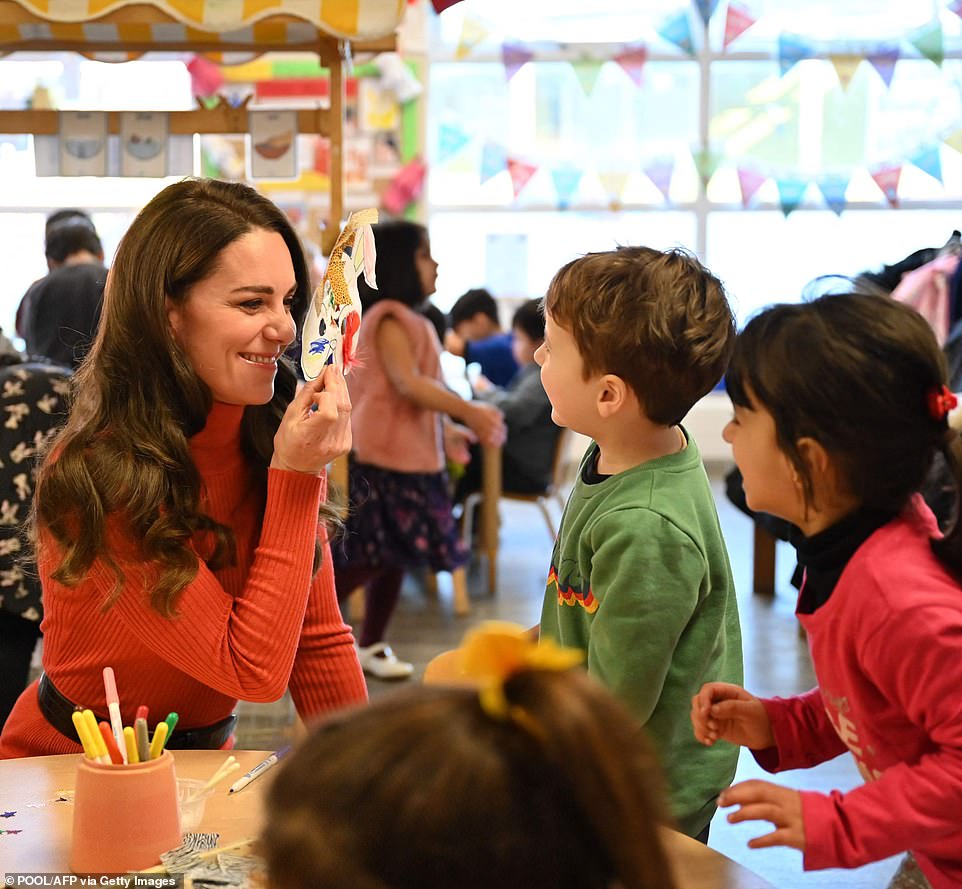 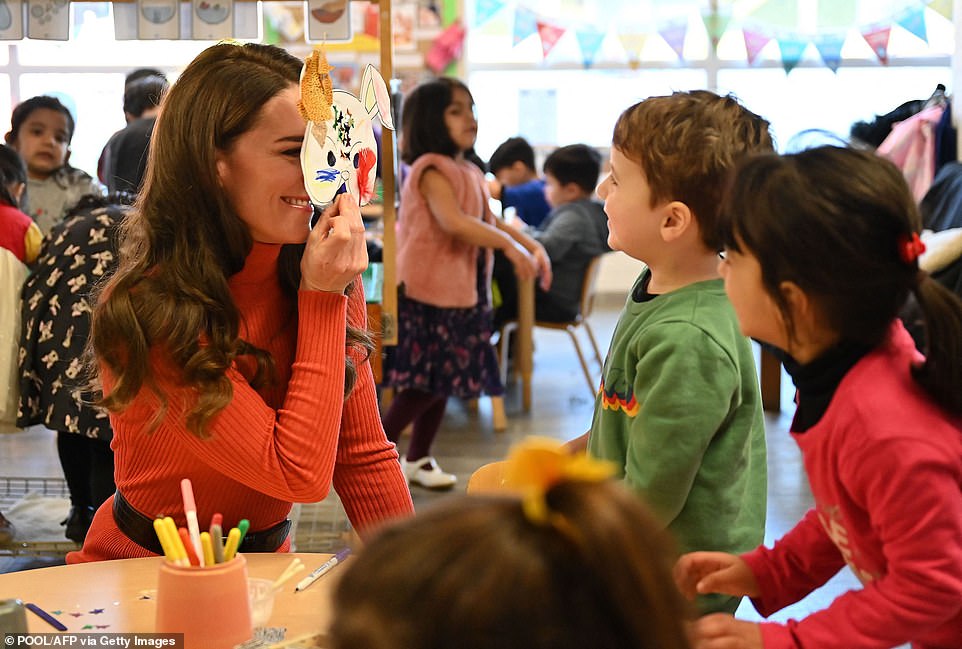 Mother-of-three Kate, 41, larked about with the children on her visit as part of her early years development 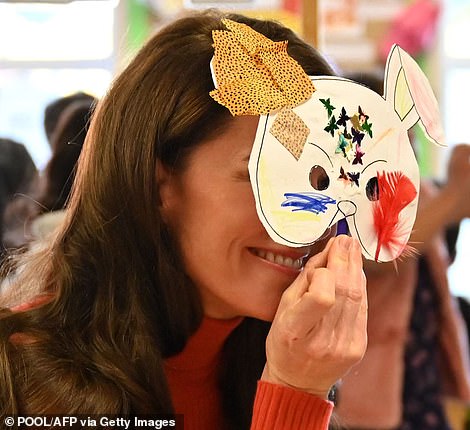 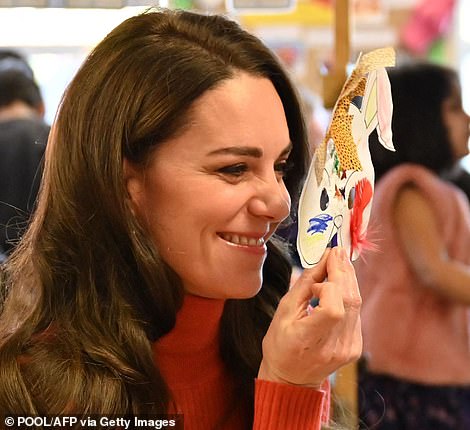 Who’s behind the mask? The Princess of Wales looked like she could barely contain her laughter as she held the bunny mask up to her face

Colonel Richard Kemp, a former UK military commander in Afghanistan said: ‘Harry should take full responsibility for giving ammunition to the murderous Iranian regime’s propaganda machine. While all decent people will reject Iran’s lies, many of their supporters will be strengthened by the ayatollahs’ exploitation of the duke’s ill-judged comments.’

Amid a backdrop of growing backlash against her brother-in-law, Kate, who has a passion for early years development and set up the Royal Foundation Centre for Early Childhood in 2021, refused to be drawn from her focus this morning as she threw herself into her work.

As she arrived at the nursery, Kate thanked the staff members for hosting her and commented on the chilly but bright weather.

‘I was just saying, it’s such a beautiful day,’ she mused as she shook the hands of the staff – although she did comment on the ‘cold mornings’ the UK has been having.

After a chat with the staff at the nursery, Kate was eager to sit down for an arts and crafts session with the children – and she even played a game of peek-a-boo with some of their bunny masks.

The Princess was captured on camera trying not to break into laughter as she hid her face behind a bunny mask, which had been decorated by the children at the nursery.

Kate’s professional demeanour comes after a source close to Kate told The Mirror she was ‘too busy’ with her duties to pay much heed to the allegations made by Harry in Spare and in the various TV interviews he has done to promote it.

The newspaper reported that while the Princess of Wales had been left ‘baffled’ by Prince Harry’s claims in ‘Spare’, she had ‘already moved on’ as she prepares to launch a programme for early years development for children between the ages of three and five. 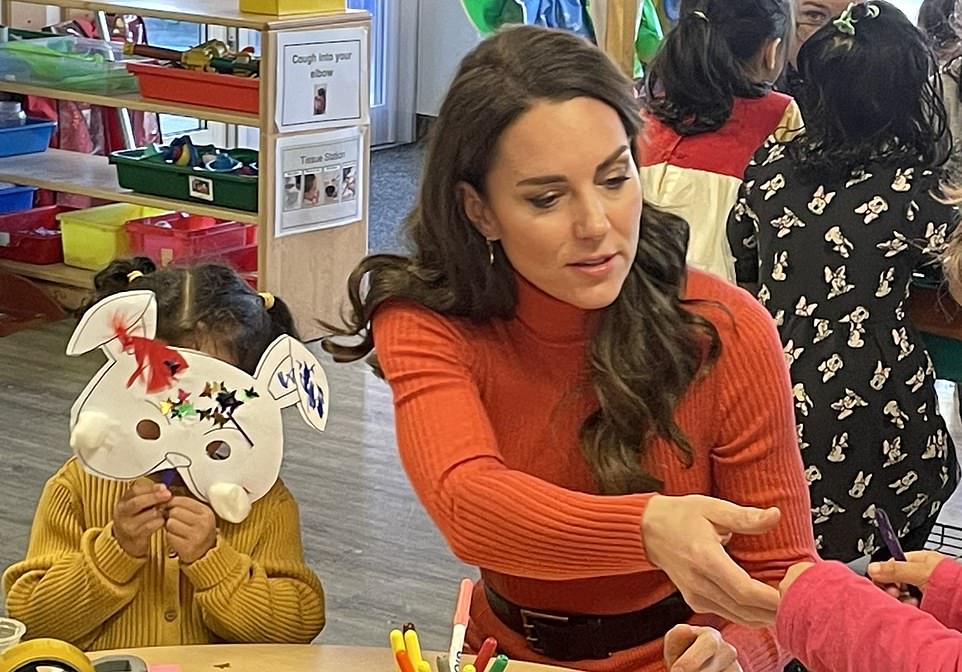 Peek-a-boo! While the Princess began doing arts and crafts with one of the children at the nursery, a cheeky tot put her bunny mask up to her face 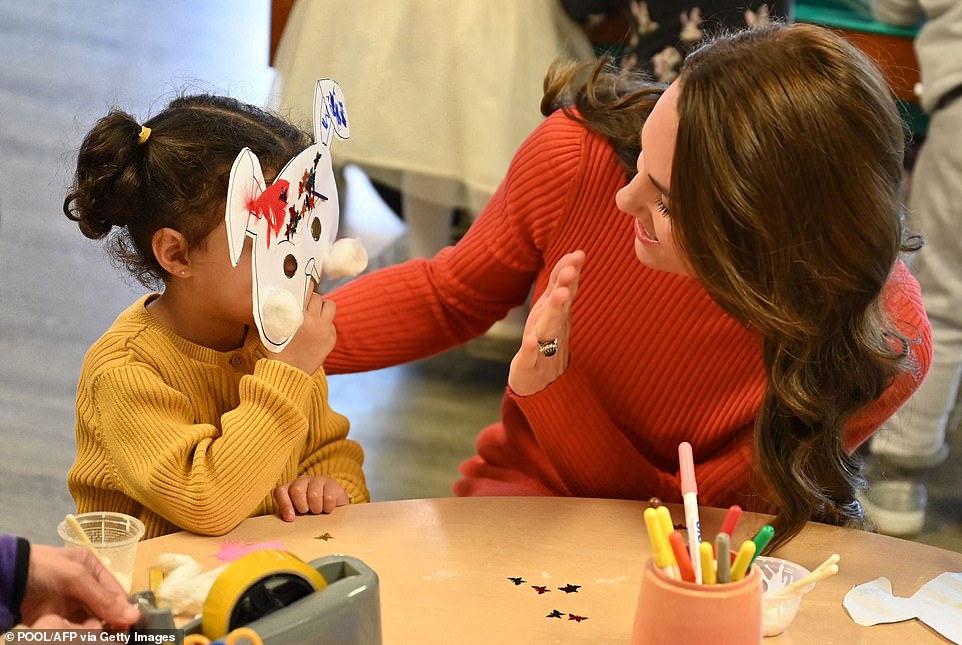 Hello there! After realising the cheeky tot next to her was larking about with her mask, the Princess gave her a wave and a smile 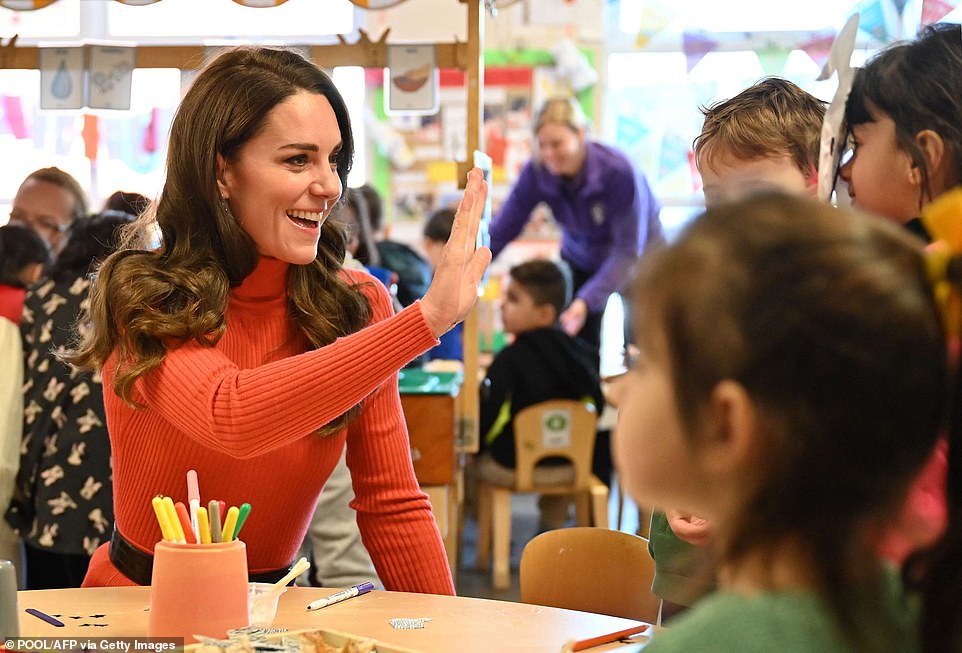 Hello again! Kate beamed as she played along with the children’s game of messing around with the bunny masks, which they did not tire of 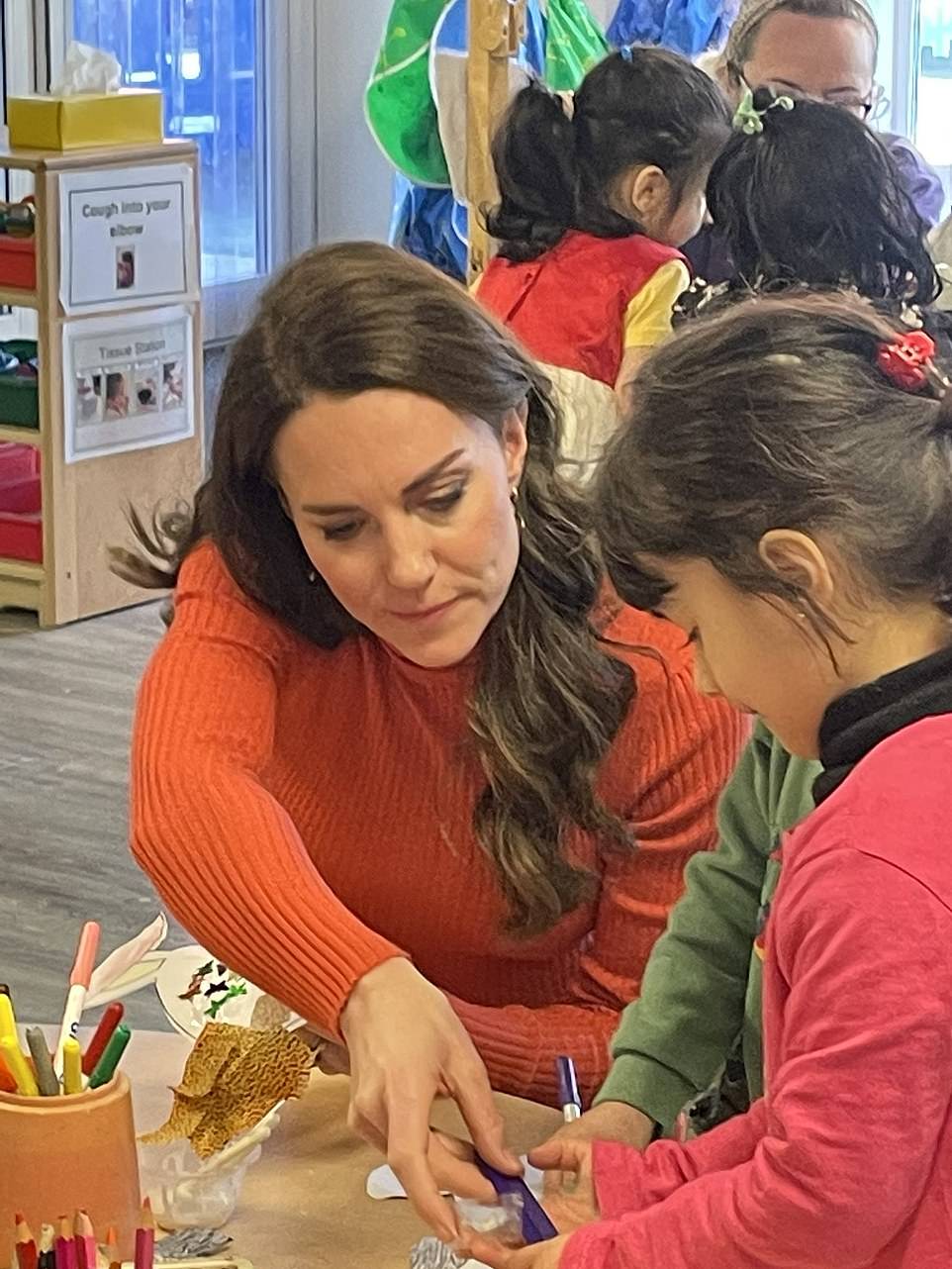 Hard at work! The concentration on this young pupil’s face is immeasurable as the Princess of Wales helps her with a task 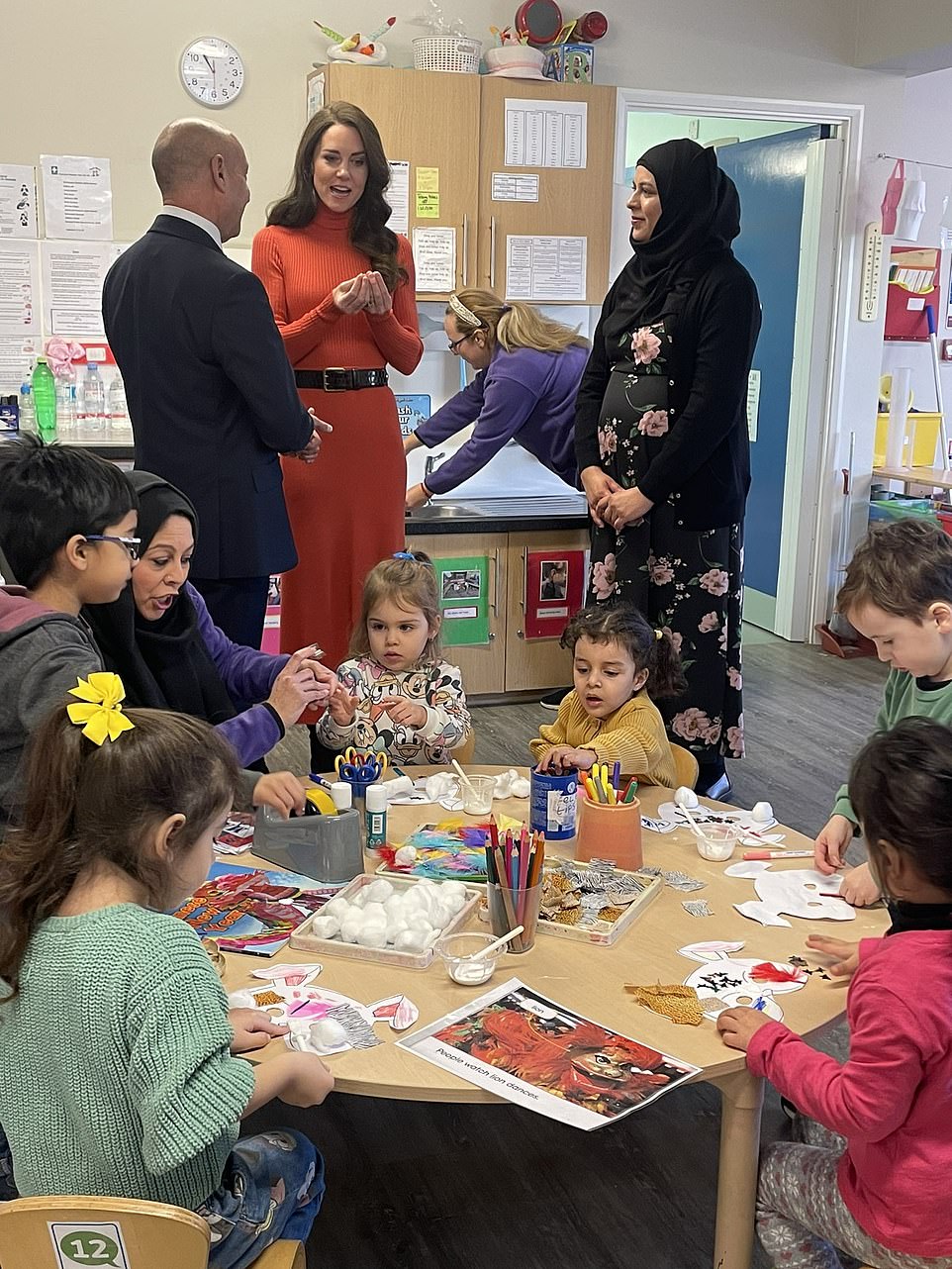 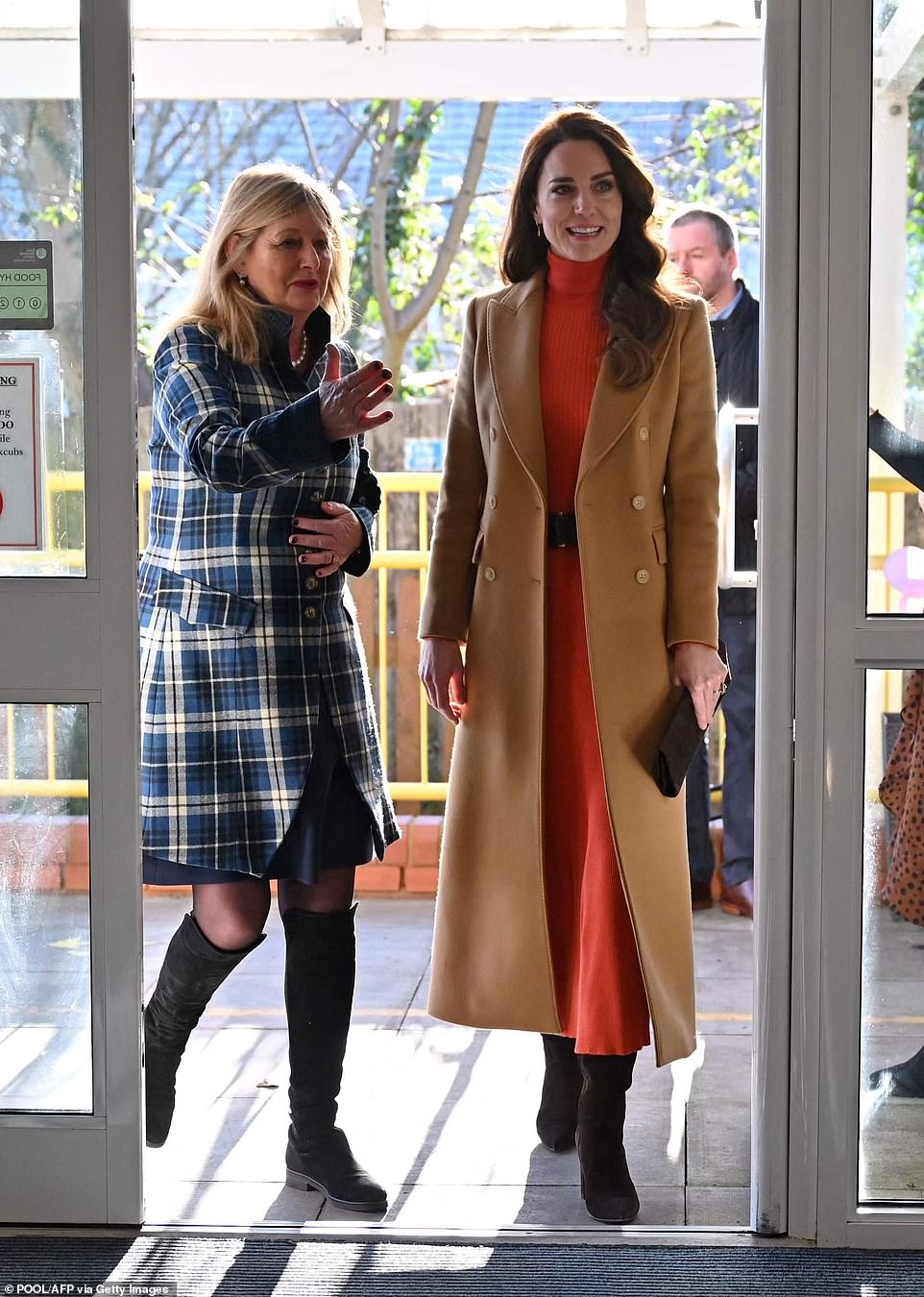 Regal as ever! Kate, 41, stunned in a Massimo Dutti camel coat and a top and skirt combination from Gabriela Hearst as she arrived at the nursery 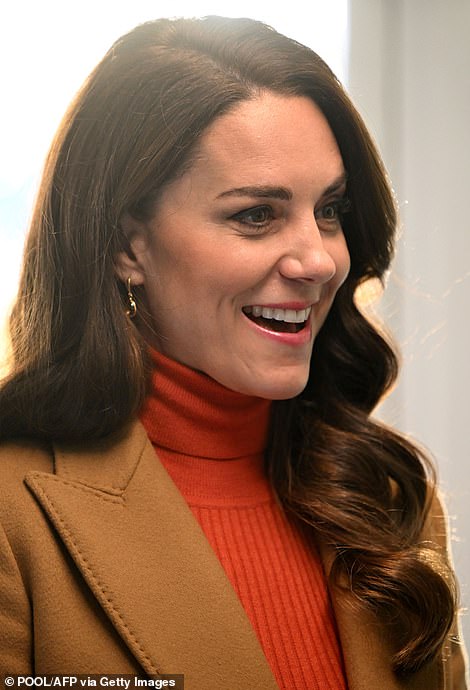 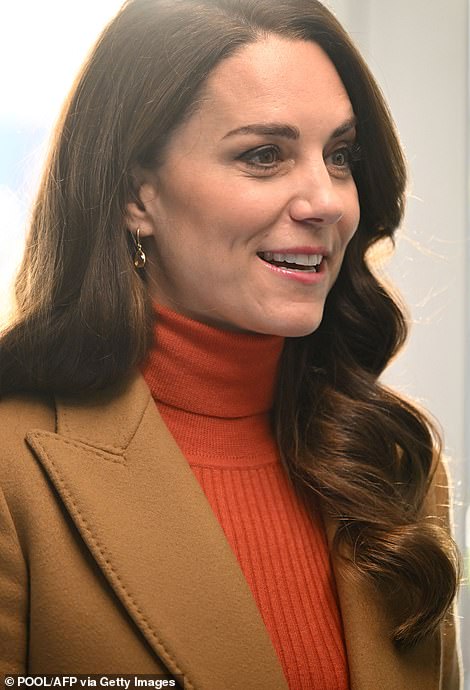 Today the Princess of Wales proved her commitment to early years studies and development on her visit to Foxcubs, which has been rated ‘outstanding’ by Ofsted.

The nursery is run by the Early Years Alliance, and offers 70 places for local children aged between two and five years old – Kate’s main area of focus.

Children at the nursery are encouraged to learn through play, and places are offered to children of families who are eligible for free childcare.

During her visit, the Princess will meet early childhood teachers and will discuss the role these settings play in shaping a child’s development.

She will also meet the parents whose children attend the nursery and discuss the support they are provided with every day, as well as long term social and emotional development for their children.

This weekend, the royal rift deepened even further after the Duke of Sussex sent a message to his family in an interview with the Telegraph, demanding they apologise to the Duchess of Sussex.

He said: ‘You know what you did, and I now know why you did it. And you’ve been caught out, so just come clean.’

The Duke did not specify what he was referring to, but elsewhere in the interview he revealed more details of what he claims happened behind closed doors before he and Meghan stepped down as senior royals.

He said: ‘It was all so avoidable. But they just couldn’t help themselves.’

He also claimed that ‘if people had listened’ to his concerns earlier, the gulf between he and Meghan and the rest of the royals would not have grown so wide.

Despite the accusations levelled at the royals by the Duke of Sussex, the Princess of Wales seems more popular than ever among royal fans, demonstrated by the enormous crowds of people who queued up to meet her and Prince William, 40, last week.

As the couple visited the Royal Liverpool University Hospital in Merseyside, the Princess was pictured taking selfies with members of the public.

She joked: ‘I’ll get told off by William’ as she posed for snaps -hinting to the Prince of Wales’s dislike of selfies.