Princess Eugenie has shared a photograph of her back scar from the life-changing spinal surgery she had as a child to mark International Scoliosis Awareness Day.

The Queen’s granddaughter, 30, posted the image to her personal Instagram account late last night to mark the event.

Her 1.1million followers were quick to praise her ‘inspirational’ snap after she encouraged them to be ‘proud and share their scars’ with the world.

Eugenie underwent spinal surgery to treat scoliosis aged 12, leaving her with a sizable mark along her spine.

It is thought the royal has returned to her Kensington Palace home Ivy Cottage with her husband Jack Brooksbank after spending lockdown with her parents Sarah Ferguson and Prince Andrew at the Royal Lodge in Windsor.

Her 1.1million Instagram followers were quick to praise her (pictured) after she encouraged them to be ‘proud and share their scars’ with the world 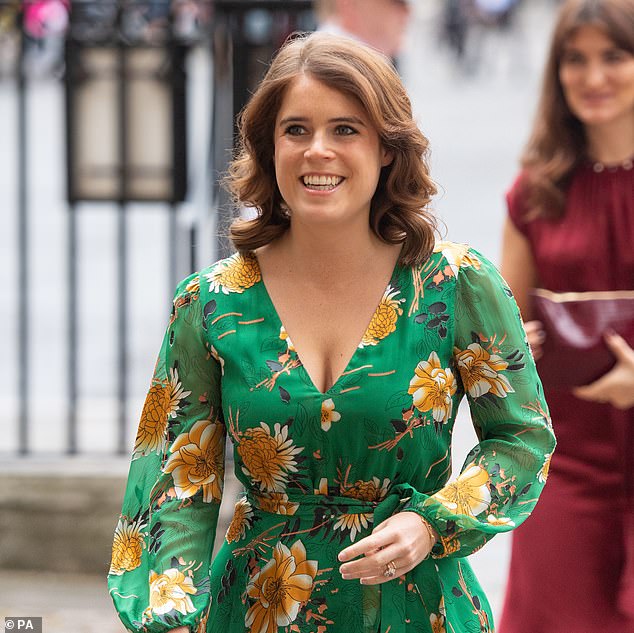 Eugenie (pictured in 2019) underwent spinal surgery to treat scoliosis aged 12, leaving her with a sizable mark along her spine

‘Today is International Scoliosis Awareness Day,’ Eugenie explained. ‘I just wanted to share my scar and encourage anyone out there who’s gone through something similar to share theirs with me.

‘Let’s be proud of our scars! I’d love to repost any of your images on my stories so please tag me and I will share. #internationalscoliosisawarenessday.’

Royal fans praised the princess for her candid photograph, with one writing: ‘You’re a great spokesperson! What a beautiful soul you are.’

A second said: ‘Such an inspiration! Went through the same surgery when I was 11 (now 30!) never been ashamed of my scars, they tell an interesting story!’

Another penned: ‘I have had this surgery in October 2019 and you truly help me to not be ashamed of my scar and to proudly show it as it is a part of me now.’ 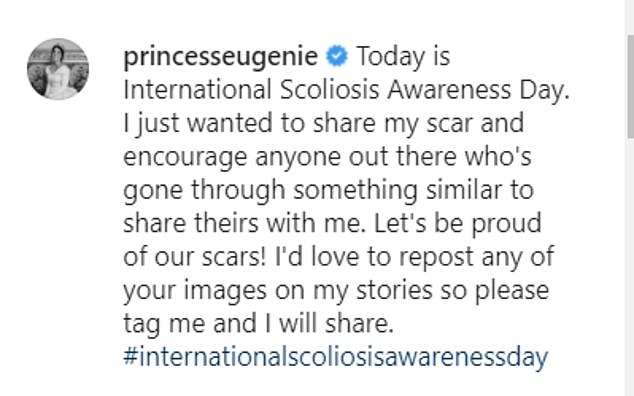 The Queen’s granddaughter, 30, posted the image to her personal Instagram account late last night along with the above caption to mark the event

Reaction: Royal enthusiasts (pictured above) praised the princess for her candid photograph

A fourth added: ‘You are seriously the coolest princess,’ while a fifth wrote: ‘I remember your wedding dress – you were proud to show your scar.’

Eugenie wore her surgery scars with pride during her nuptials to Jack on 12 October 2018 in a stunning backless wedding dress.

Eugenie was diagnosed with scoliosis and underwent corrective surgery aged just 12, with a pair of eight-inch titanium rods inserted alongside her spine to rebuild it as a result of a curvature. The operation resulted in a prominent scar.

After a tumultuous few months where the young Princess had to be turned gently in bed and wear a brace, she went back to school and said she always had total faith in her doctor’s and parent’s assertions that she’d be okay. 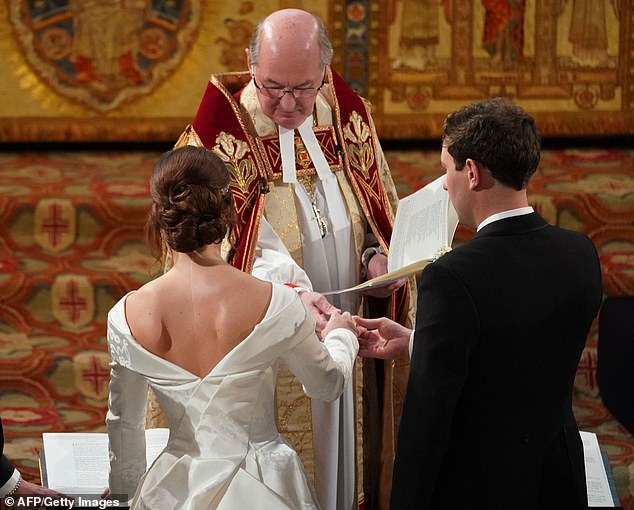 Eugenie’s childhood operation resulted in a prominent scar, which she wore with pride, opting  for a backless gown for her wedding to Jack Brooksbank last October (pictured)

In an interview before her wedding, the princess said: ‘I think you can change the way beauty is, and you can show people your scars and I think it’s really special to stand up for that.’

The doctor who performed her surgery was even in attendance at the ceremony, invited by Eugenie.

Speaking about the operation, she said: ‘There are so many emotions and worries that go thundering through your head.

‘Will I be able to play sports, or will I look the same, or will I miss a lot of school and be behind? I remember being angry about not being able to run and play.’

Scoliosis is the abnormal curvature of the spine in an S-shape.

Signs include a visible curve in the spine, one shoulder or hip being more prominent than the other, clothes not hanging properly and back pain.

Pain usually only affects adults with the condition.

In most cases, the cause of the scoliosis is not known but it can be caused by cerebral palsy and muscular dystrophy.

In the UK, scoliosis affects three to four children could of every 1,000.

It is also thought that as many as 70 per cent of over 65s have some degree of scoliosis.

It is more common in women than in men.

Most children with the condition do not require treatment as it is mild and corrects itself as the child grows.

However, in severe cases the child may need to wear a back brace until they stop growing.

Occasionally, a child needs surgery to straighten their spine.

In adults, it is usually too late to treat the condition with a back brace or surgery so treatment revolves around reducing pain.