EXPRESS INFORMER > News & Politics > Princess Eugenie is pregnant! Prince Andrew’s daughter is ‘due to give birth to in several months’

Princess Eugenie is pregnant with her second child and due to give birth in the summer, it has been announced.

Eugenie, the youngest daughter of Prince Andrew and Sarah Ferguson, gave birth to her first son August Philip Hawke Brooksbank, who is 13th in line to the throne, at London’s Portland Hospital in February 2021.

Announcing the news today, Buckingham Palace said in a statement: ‘Princess Eugenie and Mr Jack Brooksbank are pleased to announce they are expecting their second child this summer.

‘The family are delighted and August is very much looking forward to being a big brother.’

Moments later, Eugenie shared an adorable snap on her Instagram page, taken by her husband Jack, showing her young son kissing her stomach, writing: ‘We’re so excited to share that there will be a new addition to our family this summer.’

Princess Eugenie is pregnant with her second child and due to give birth in the summer, it has been announced (pictured, with her son August)

While it is not known where the photo of Princess Eugenie and August was taken, it appears to have been snapped in the past few weeks, with frost on the ground.

In the snap, the mother-of-one can be seen beaming down at her young son, who snuggled into her tummy enthusiastically.

It is not currently known whether she is expecting a boy or a girl.

Eugenie and her husband Jack first began dating in 2011 and confirmed their relationship in an appearance at Royal Ascot that same year.

The royal shared an adorable snap on her Instagram page showing her young son kissing her stomach, and taken by her husband Jack (pictured, the caption on the image)

When Eugenie left London to work for an auction house in New York in 2013, the pair maintained a long distance relationship.

At the time, Jack told The Daily Mail: ‘We spend a lot of time on Skype. It’s great. We’re still very much together.’

In 2015 the Princess returned to London where the pair grew ever closer – and they sparked engagement rumours the following year.

But it was two more years before Jack popped the question while the pair were away in Nicaragua in January 2018. 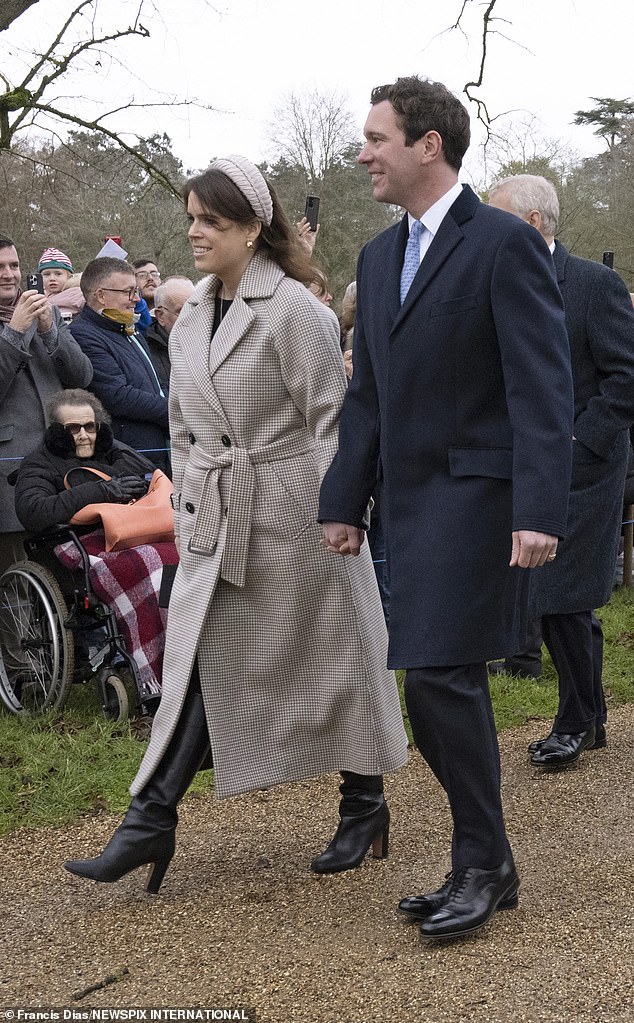 The Princess has had a busy few months, making a number of appearances at royal events, including attending church in Sandringham at Christmas and attending Kate’s carol concert (pictured with her husband Jack)

Eugenie tied-the-knot with Jack in October 2018, before they welcomed their first child, August, in February 2021.

She announced her first pregnancy in a similar fashion, posting a snap on Instagram at the same time the palace announced the news.

He weighed 8lbs 1oz and the couple broke with tradition by immediately sharing a black and white photo to Eugenie’s Instagram of their baby boy, showing them holding his tiny hand.

She followed the post with three blue hearts after welcoming her son at the luxury private hospital where Meghan also gave birth to her son, Archie. 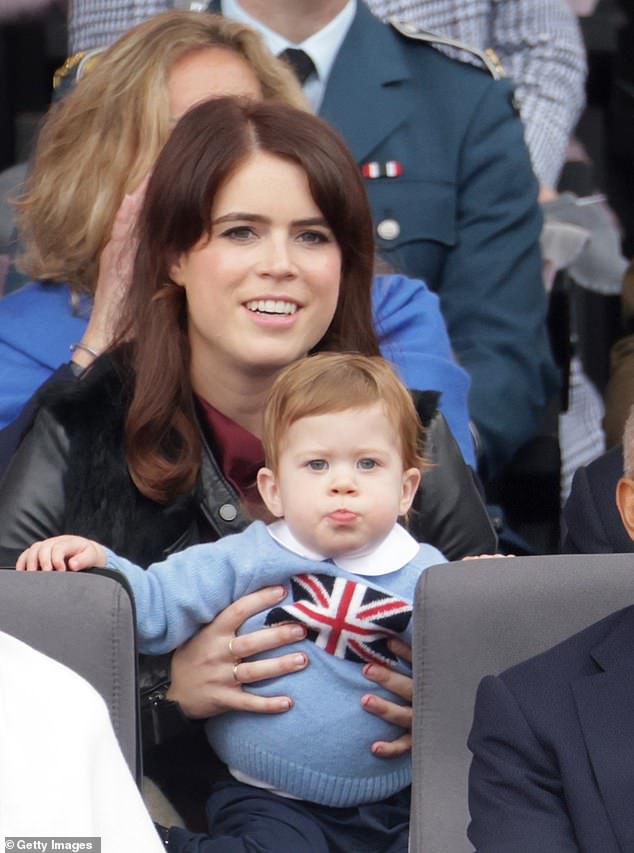 Eugenie, the youngest daughter of Prince Andrew and Sarah Ferguson, gave birth to her first son August Philip Hawke Brooksbank, who is 13th in line to the throne, at London’s Portland Hospital in February 2021  (pictured with her son at the late Queen Elizabeth’s Platinum Jubilee in June 2022)

Eugenie went on to reveal August’s name was a touching tribute to Queen Victoria’s Husband Prince Albert, whose birth name was Franz Albert August Karl Emanuel, and Prince Philip, who died at the age of 99.

Eugenie largely kept August out of the limelight for his first two years, but delighted fans when she shared a video of her son dancing during the Platinum Jubilee celebrations.

The Duchess of York, 61, has previously praised Eugenie’s mothering skills during an interview with Hello magazine.

The Princess has had a busy few months, making a number of appearances at royal events, including attending church in Sandringham at Christmas and attending Kate’s carol concert.

The couple are also now splitting their time between the UK, where they are subletting Harry and Meghan’s Frogmore Cottage home, and Portugal.

It was reported in May last year that they are spending part of their time at the CostaTerra Golf and Ocean Club, a luxury resort an hour south of Lisbon on Portugal’s picturesque Atlantic coast.

The move is believed to be because of Jack’s job working with property tycoon Mike Meldman, a longstanding business partner of George Clooney.

Eugenie’s husband had previously worked for tequila brand Casamigos, which the actor helped found. It was sold to Diageo in 2017 for £550million. He is now working for Mr Meldman’s Discovery Land Company, which has been developing CostaTerra since 2019.

It comes after Eugenie said she wants her son to be a climate change activist from ‘aged two’ and has stopped using plastic at home.

Princess Eugenie has had a busy few months, continuing her own charity work (left, in October), and attending Kate’s carol concert in December (right)

At the World Economic Forum in Davos, the 32-year-old said giving birth to her son August in 2021 ‘totally changed’ her outlook on the environment.

She said: ‘My son’s going to be an activist from two years old, which is in a couple of days.

‘Everything is for them, right? Every decision we now make has to be about how August is going to be able to live his life.’

Her comments echo interventions by her cousin Prince Harry, 38, who has described how ‘everything changed’ when he became a father because he started to question ‘what is the point in bringing a new person into this world when they get to your age and it’s on fire?’

The Duke of York’s daughter said that becoming a mother has made her more concerned for communities vulnerable to climate change in a discussion with Reuters IMPACT and Arctic Humanity at Risk Basecamp.

Eugenie, speaking with Reuters editor-at-large Axel Threlfall and Arctic Humanity founder Gail Whiteman, said: ‘My son’s going to be an activist from two years old, which is in a couple of days. So, he, everything is for them.

‘I talked to Peter Thomson, the UN Special Envoy for Oceans and all he says to me is that I do this for my grandchildren. And that’s the same.

‘Every decision we now make has to be for whether August, what he’s going to be able to look at and do and how he’s going to live his life.

‘But I think also as a mother, you all of a sudden, totally you change, your hormones change, everything changes.

In an interview with Reuters IMPACT and Arctic Humanity at Risk Basecamp, Eugenie said educating her son about the environment is a ‘battle’

Prince Andrew’s youngest daughter said she views the world differently since becoming a mother, and her concerns about climate change have affected how she lives.

But the princess also spoke of her hope for the future of the environment, saying: ‘I like to be ‘glass half full’.’

Eugenie added: ‘I’d rather be that way, but sometimes the facts and the figures and sometimes having the dinners do give you that sort of sense of frustration and doom and gloom.’

And she also warned of the impact of a changing environment on vulnerable communities, adding: ‘Modern slavery and human trafficking is a really big issue across the globe.

‘There are 49million people estimated in slavery today and we know that when the climate is vulnerable, the most vulnerable people are affected by it.

‘And we’re going to see that more and more, you know, each time there’s a crisis happening, that people are going to be vulnerable and taken into difficult situations.

‘So climate goes hand in hand with it really.’