On board a yacht surrounded by trusted friends with the clear blue ocean between her and prying eyes, it should have been a welcome break from reality for the embattled Princess of Wales.

But unearthed photos of Princess Diana on board a yacht in Italy with Kyril, Prince of Preslav, and the designer Valentino taken in 1990, two years before her separation from Prince Charles, show the late royal looking pensive and unsure.

The candid snap, posted to Instagram yesterday by Valentino co-founder Giancarlo Giammetti, shows the late royal with wet hair holding a drink, in a colourful print bikini with a purple shirt tied at her waist.

Believed to have been taken aboard the fashion house’s private T.M.Blue One yacht in September 1990, two years before her separation from Prince Charles, the princess is sandwiched between Prince Kyril, also known as Kyril of Saxe-Coburg, and the Italian designer in the photograph.

Eight years on from her fairytale wedding to Prince Charles, their marriage was irreparably falling apart with her husband resuming his relationship with old girlfriend Camilla Parker-Bowles – who Diana had confronted about the affair a year before – and the Princess engaging in a two-year affair with James Hewitt, who she would later famously tell the world she ‘adored’.

By the time the photos were taken in the summer of 1990, their relationship was over and Hewitt had been posted to Germany, a huge blow to Diana who had already contended with her marriage falling apart, a suicide attempt while pregnant with Prince William, bulimia and post-natal depression – events recently depicted in vivid detail in series four of The Crown.

In the background is Stromboli, a small island in the Tyrrhenian Sea off the north coast of Sicily containing Mount Stromboli, one of the three active volcanoes in Italy.

Giancarlo, who co-founded the fashion house with Valentino Garavani, also shared another photo of the two of them greeting the princess at a formal event. It’s not known when it was taken.

Diana, wearing a chic white blazer with puff sleeves and a turquoise trim with a matching skirt and clutch, grinned as she engaged with the two men.

Giancarlo captioned the images: ‘And here two moments of friendship with her #princess Diana.’ 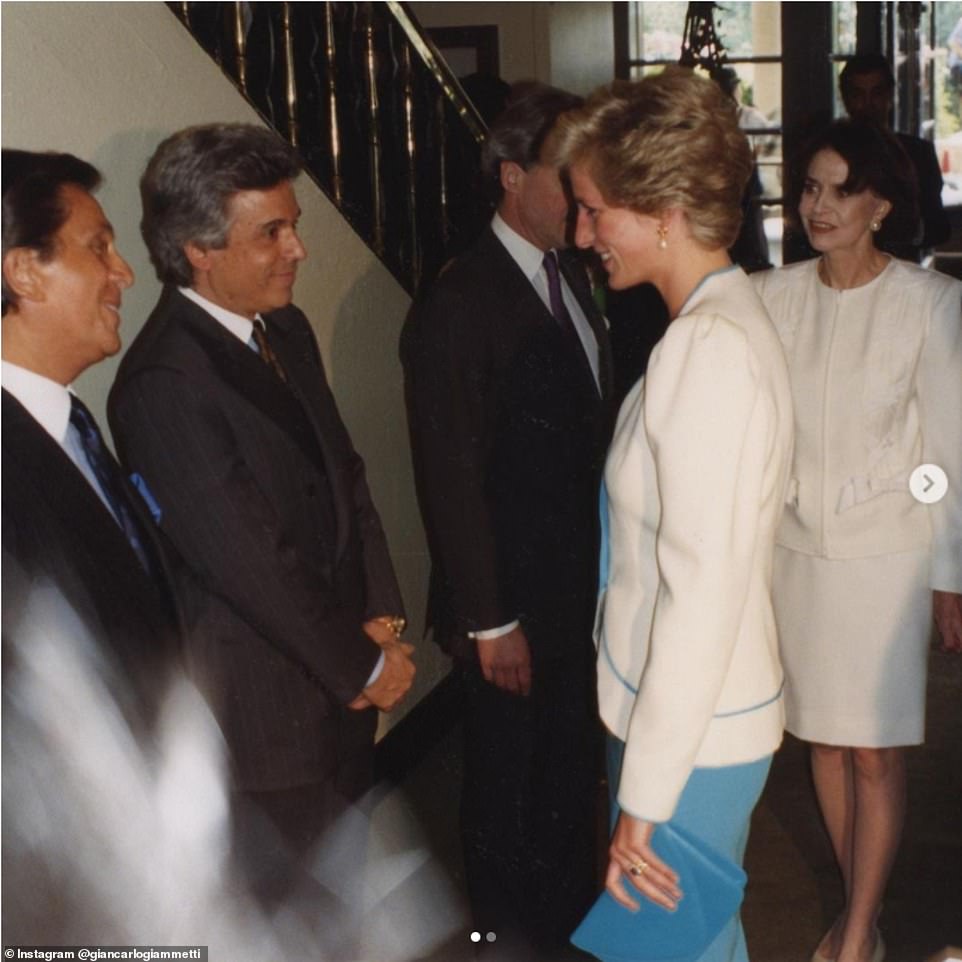 Giancarlo, who co-founded the fashion house with Valentino Garavani, also shared another photo of the two of them greeting the princess at a formal event. It’s not known when or where it was taken

In September he shared another image of the late princess on board the yacht, believed to have been taken on the same trip.

This one also featured Prince Kyril’s then wife, Rosario Saxe-Coburg – a former model and muse for the fashion designer Valentino.

The couple had three children together – Princess Mafalda-Cecilia, Princess Olimpia and Prince Tassilo – but are believed to have separated in October 2009. 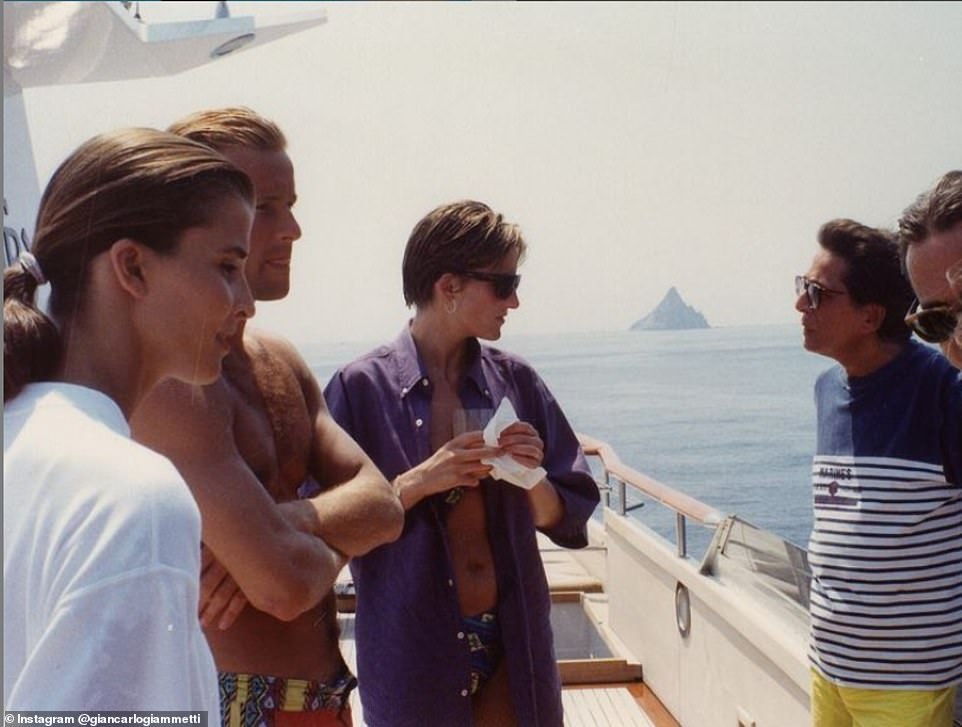 In September Giancarlo shared another image of the late princess on board the yacht, believed to have been taken on the same trip, alongside Prince Kyril and Rosario (left) 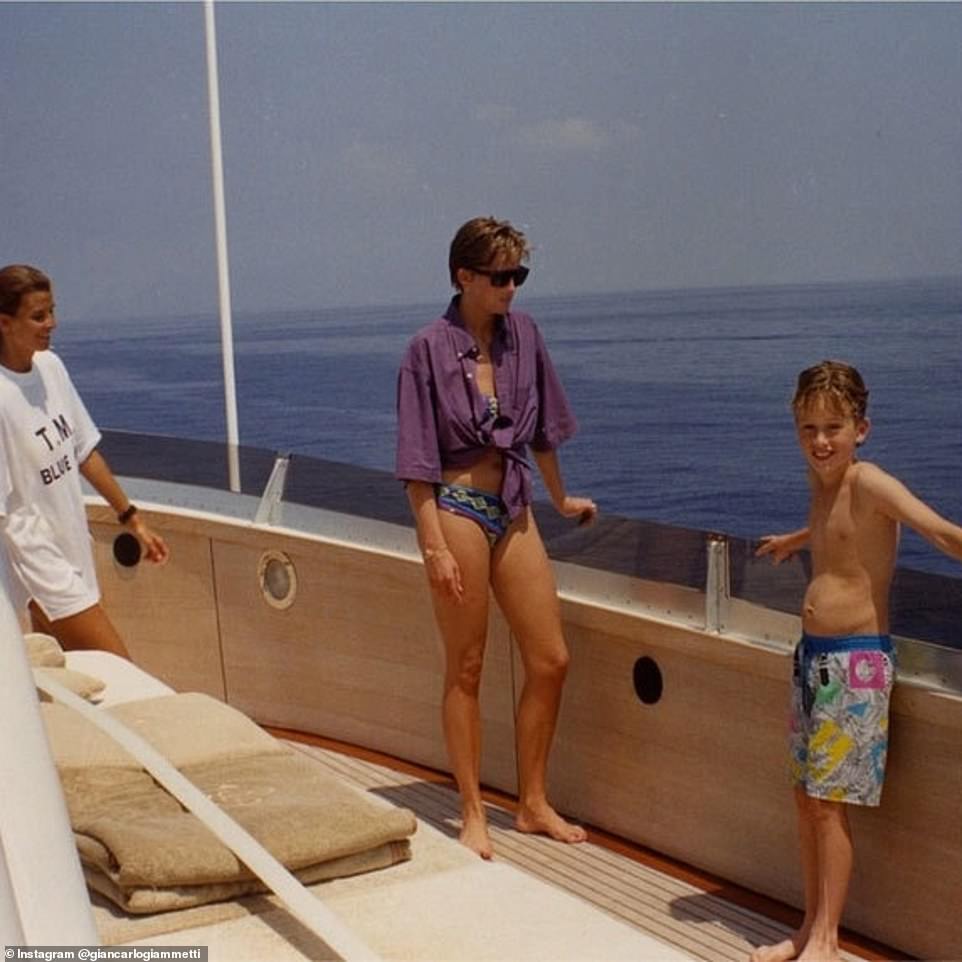 Since 2017 Kyril, now 56, has been in a relationship with British businesswoman and art historian Katharine Butler, 53. He is the godfather of Prince Aristidis-Stavros of Greece and Denmark, son of Pavlos, Crown Prince of Greece.

Giancarlo previously shared another image from the trip with Diana in 1990 in July 2014 – showing the princess chatting to Rosario and a young boy.

Diana was a known yachting enthusiast, reportedly because it was one of the few places she felt able to unwind in private.

She enjoyed her final holiday with Dodi Fayed on a boat named ‘Cujo’ in July 1997, just weeks before their deaths in a Paris car crash on August 31 the same year.

Diana was famously photographed kissing Dodi on the vessel’s deck and sunbathing on his father’s yacht’s diving board that same summer.

The boat was used by Dodi as the venue for lavish parties in the South of France, mainly in St Tropez.

Earlier this year the yacht was sold for £171,000, with some observers telling the Sunday Express that the bid was surprisingly low, sparking fears that the memory of Diana was ‘fading’.