Back in business! Princess Charlene continues her return to public life as she joins Prince Albert at F1 in Monaco for the first time since 2019

Princess Charlene of Monaco has continued her return to public life today as she joined her husband Prince Albert at the F1 Grand Prix in Monte Carlo. The royal, 44, opted for casual cool in a blue tunic dress and and white jeans with towering black heels while Albert, 64, wore an open collar shirt and blue blazer with black shoes. 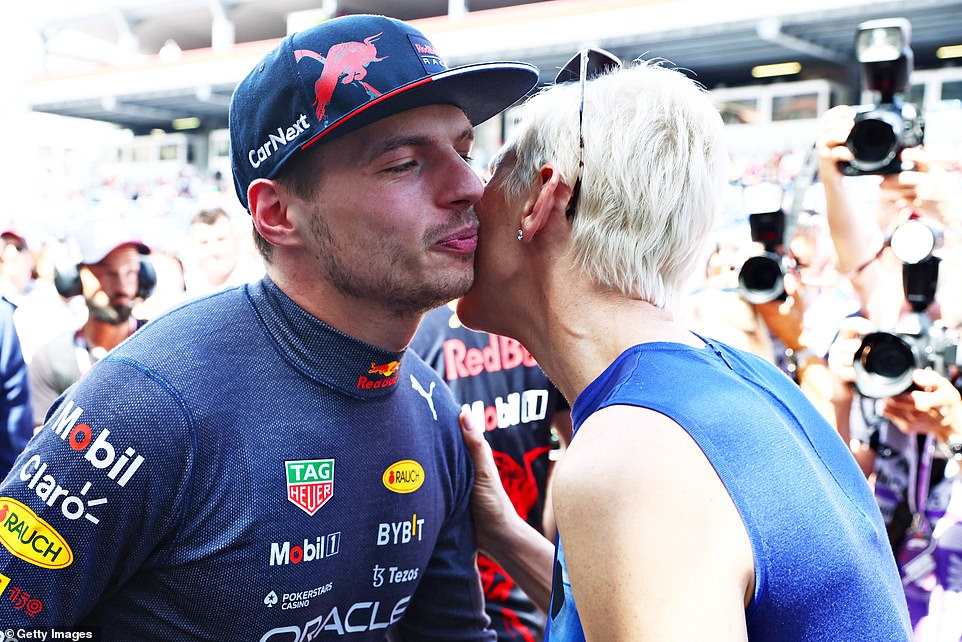 It’s the first time the pair have been seen in public together since French media claimed she is receiving $12 million (£10million) a year to appear by her husband’s side at public engagements. While she walked side-by-side with Albert, the pair did not hold hands, with Charlene warmly greeting drivers Max Verstappen (pictured) and Sebastian Vettel with kisses on the cheek. 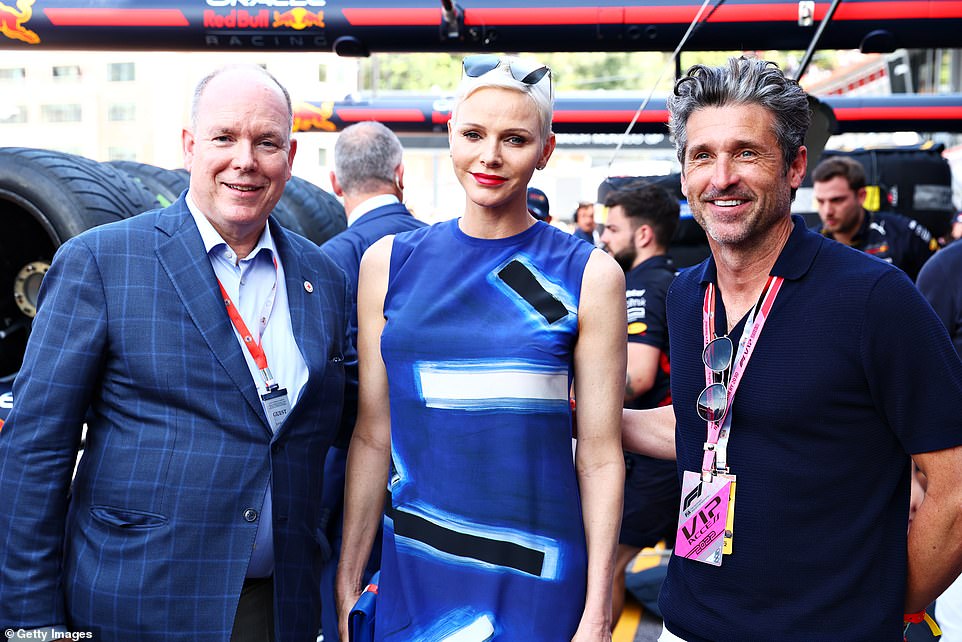 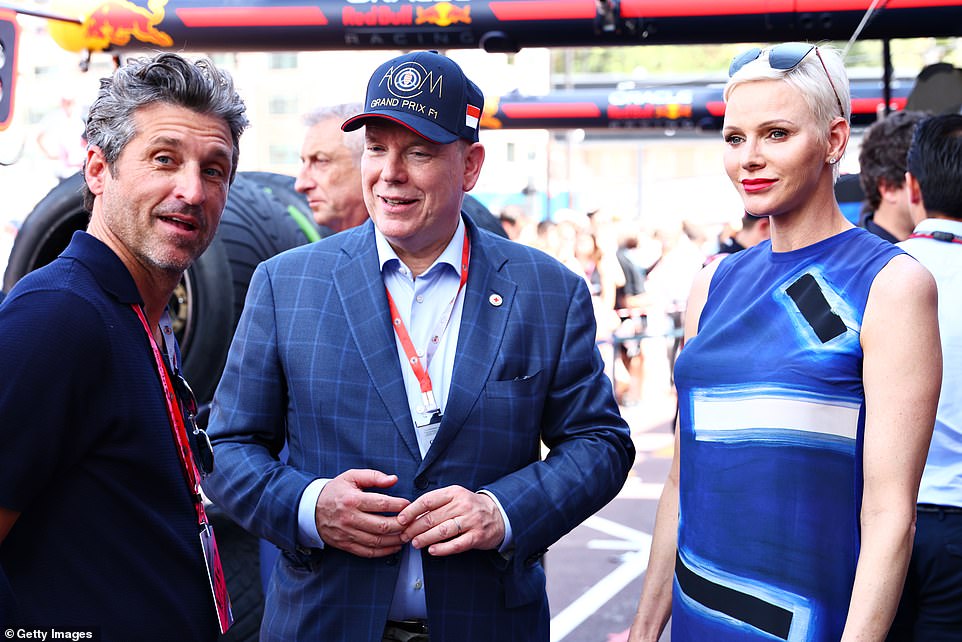 While she use to be a regular at racing events, Charlene last attended the Grand Prix in 2019 – where she received a kiss on the cheek from Lewis Hamilton. Charlene recently returned to Monaco and was seen last month with her children and husband for the first since November after spending time in treatment facility for ‘exhaustion’. 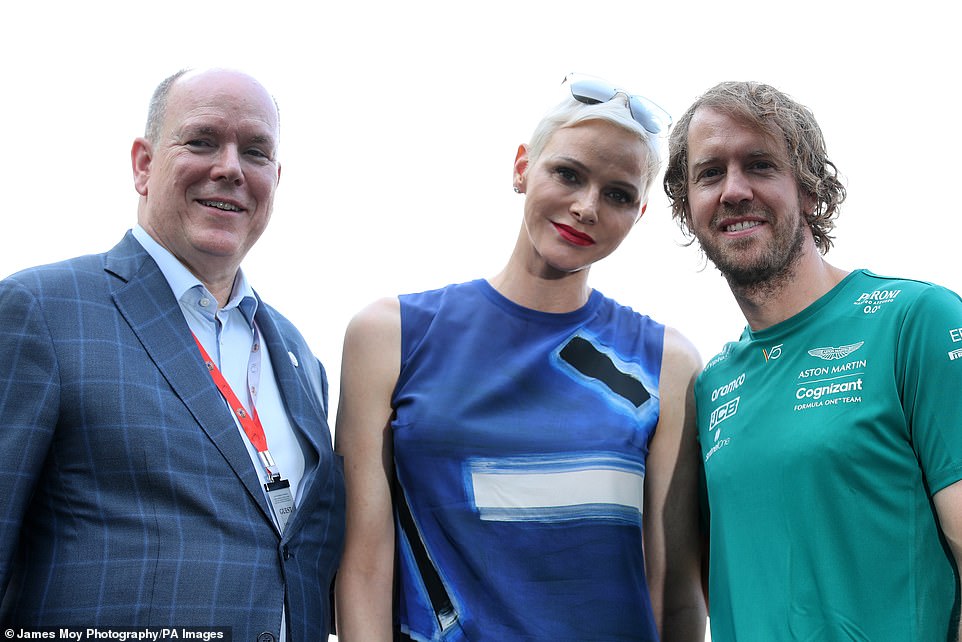 Earlier this week, the mother-of-two held hands with her daughter Princess Gabriella – who is second in line to the Monégasque throne – at the Monte Carlo Fashion Awards. They posed in front of a flower wall at the Opera of Monte-Carlo. She later presented an award to Saudi designer Abdul Al-Romaizan on stage after he opened the fashion show. Pictured: Prince Albert and Princess Charlene with Formula 1 driver Sebastian Vettel. 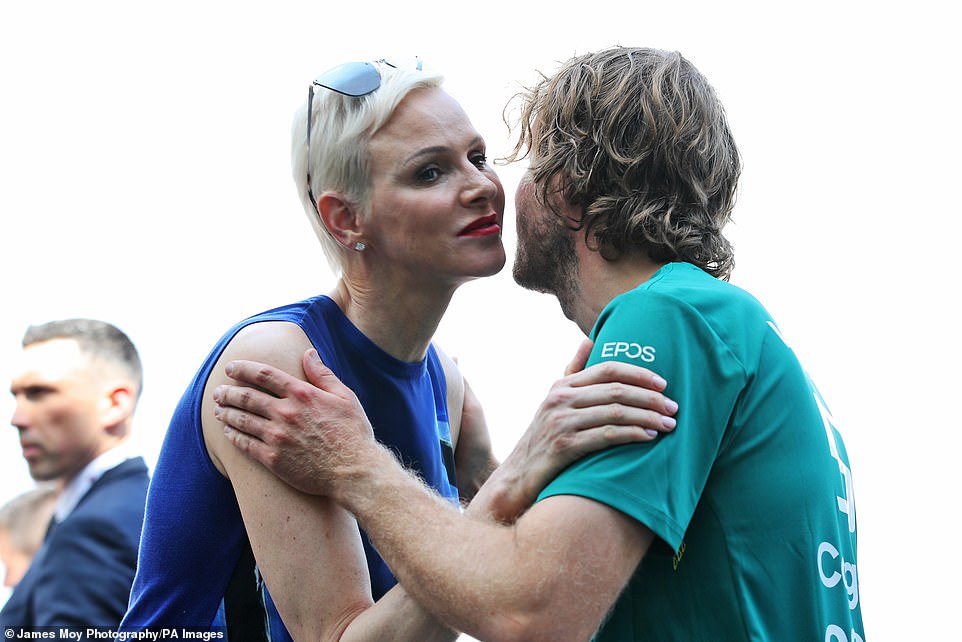 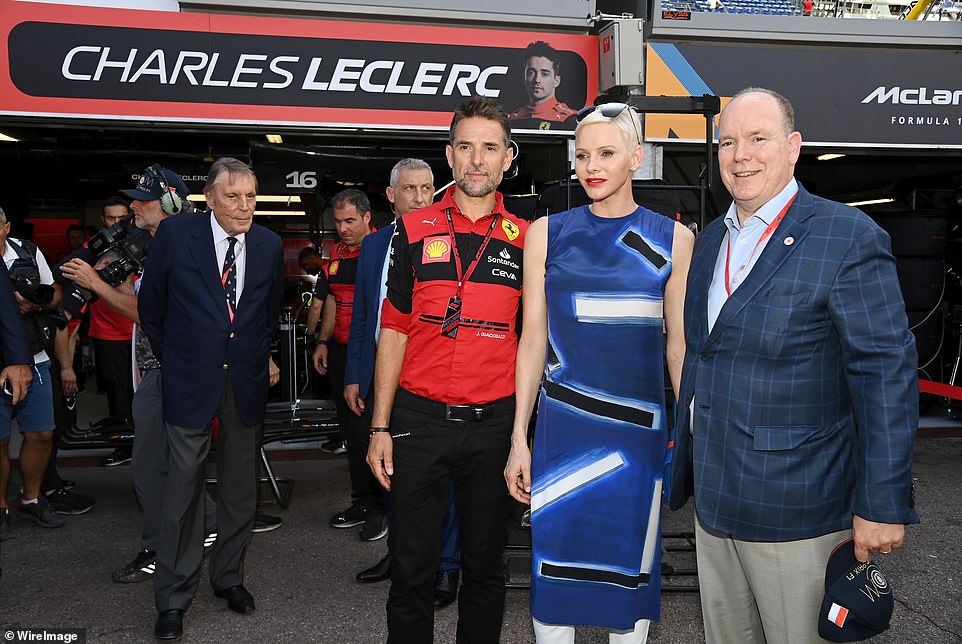 Last week, Charlene was nowhere to be seen when Prince Albert took his twins to Disneyland Paris. While just days before Charlene looked solemn as she appeared at an official engagement with her husband for the second consecutive week. 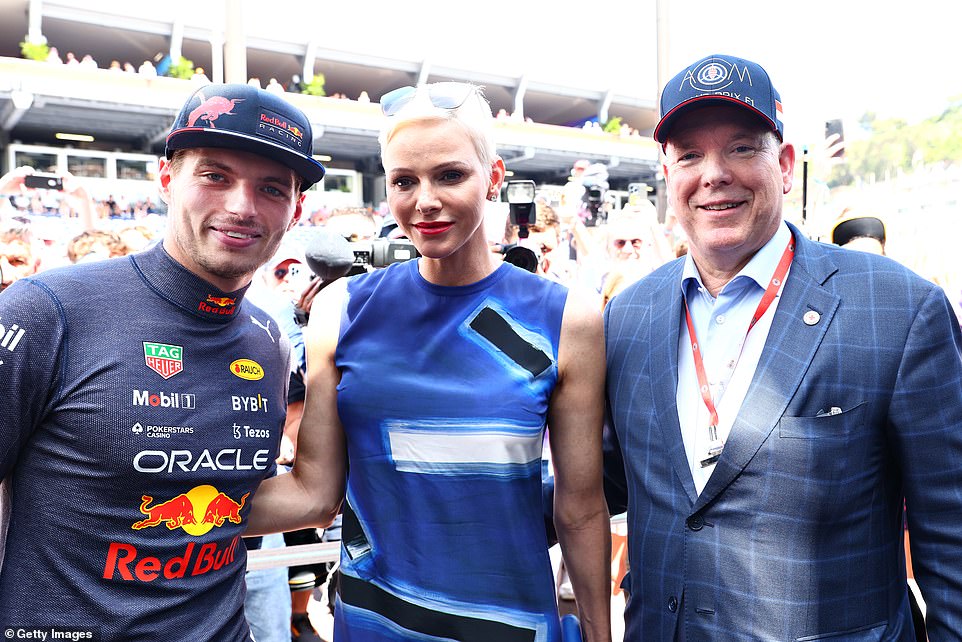 Charlene has rarely been seen with Albert since she spent some 10 months in South Africa last year. She contracted a serious sinus infection on a charity trip, which left her hospitalized and delayed her return to Monaco. She returned home in November, but left almost immediately for Switzerland to receive treatment for ‘exhaustion’. 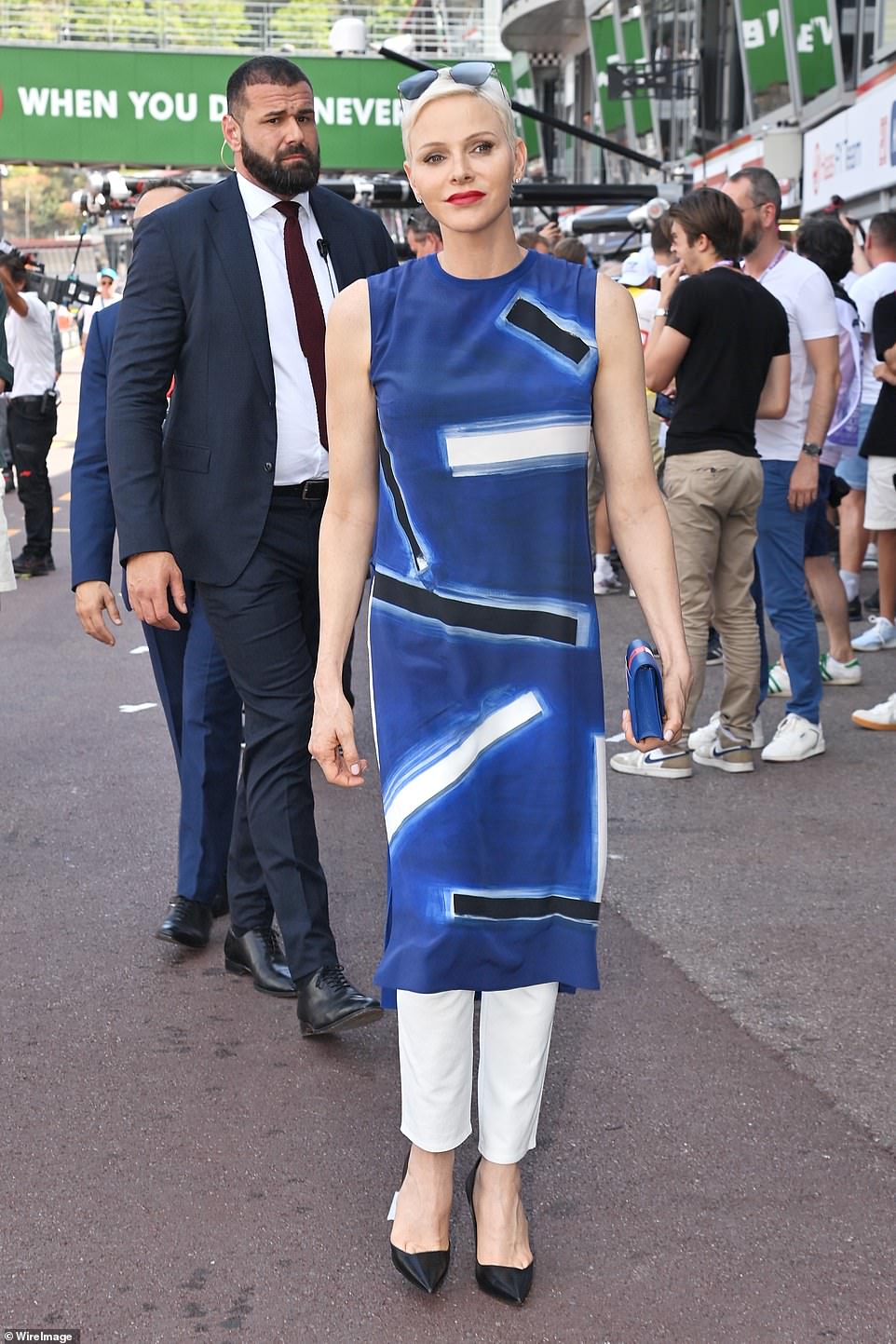 It comes as French media claimed she is receiving $12 million (£10million) a year to appear by her husband’s side at public engagements. Leading French media reported the ruler of the tax haven Mediterranean principality was doing everything possible to keep Charlene ‘at his side at public events’. Major French outlets that specialize in celebrity news said Charlene’s sudden re-appearance was welcomed by all Royal watchers. 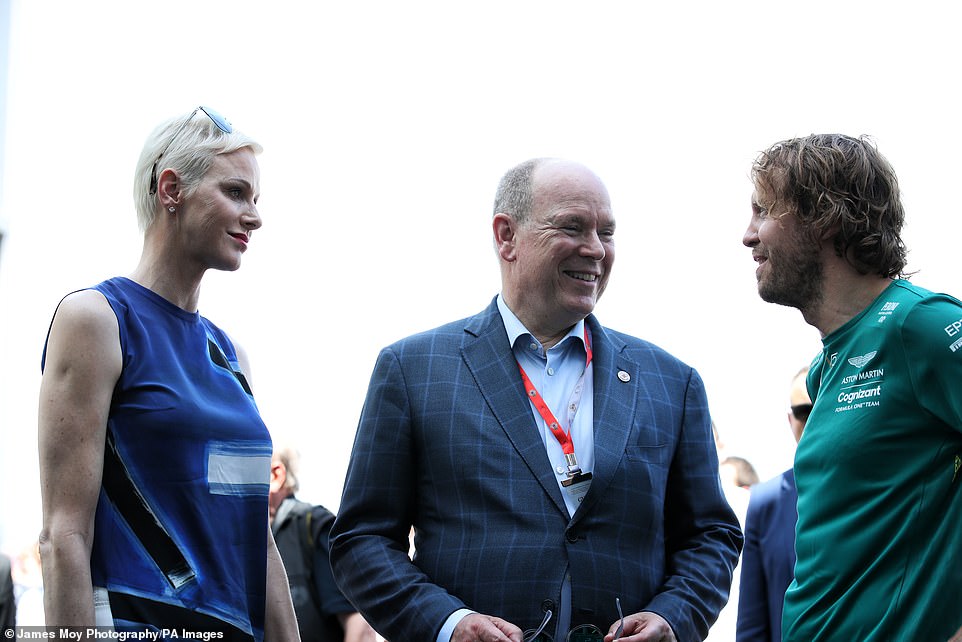 ‘But the Princess did not return at any price,’ magazine Voici reported. ‘She would have had her husband sign an ultra-confidential contract.’ The revelations were followed up by rival publication Paris Match Belgium, which wrote: ‘Prince Albert would himself pay a tidy sum to the princess so that she appears at his side at public events.’ 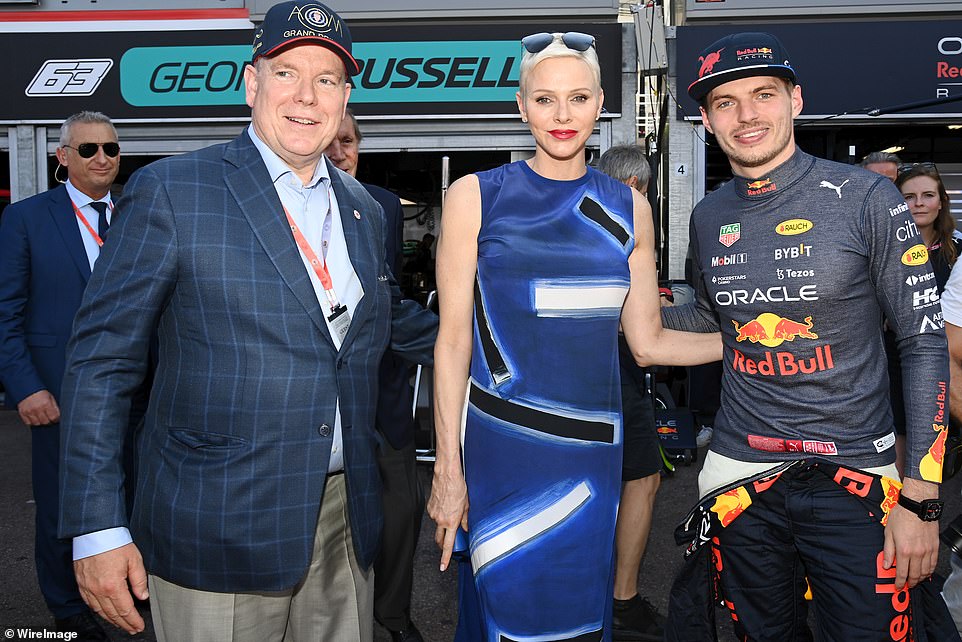 Events that Charlene could be contractually obliged to attend include the Rose charity ball which has been rescheduled from March 19 to July 8. The Royal Palace in Monte Carlo refuses to discuss specific financial arrangements, but the principality pays out some $50million (£40million) a year to cover the institution’s running costs. 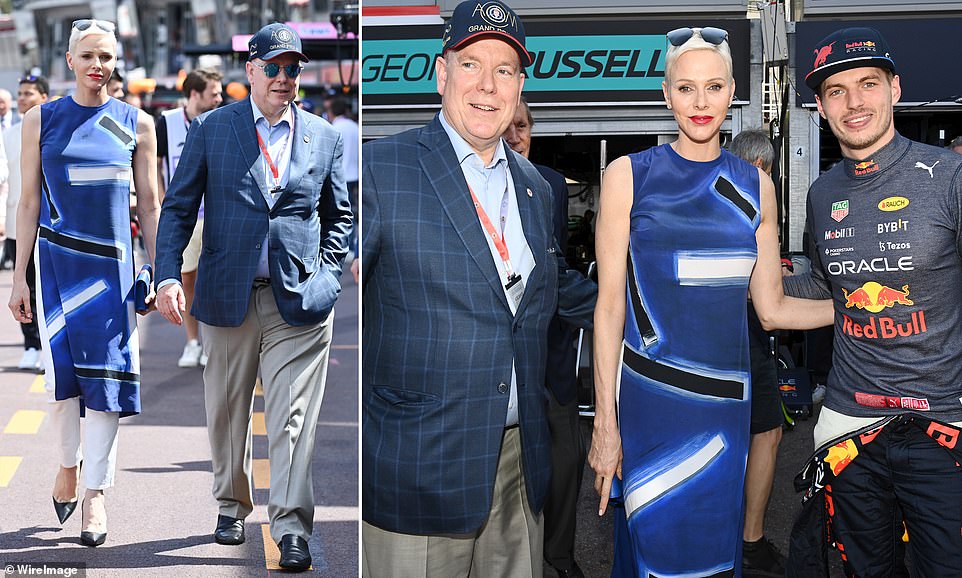 Royals are not salaried officials, however, meaning that Charlene would be reliant on Albert – a billionaire in his own right – for her own spending money. A Royal insider based in Monte Carlo told Mail Online: ‘Of course the Princess enjoys huge perks, but ready cash is not guaranteed. She’s been through a very difficult time, so it would make sense for Charlene to try and secure her own guaranteed income.’