Prince Harry has expressed his worry for other ‘spares’ in the family, despite his brother making it clear that his children are not Harry’s responsibility.

The Duke of Sussex insisted, in an interview with The Telegraph, that he still felt a responsibility ‘knowing that out of those three children, at least one will end up like [him], the spare’.

‘And that hurts, that worries me,’ he added as he accepted that any chance of reconciliation with William was unlikely at the moment.

William’s first-born Prince George of Wales is second in line to the throne, with his younger siblings Princess Charlotte of Wales third, and Prince Louis of Wales fourth.

Prince Harry has expressed his worry for other ‘spares’ in the family, despite his brother making it clear that his children are not Harry’s responsibility

The Duke also spoke of his own children, saying that he would not allow Archie, his eldest son, to go through the same ‘traumatic’ experience as him and his brother.

After taking Ayahuasca, a South American psychoactive brewed drink used in Shamanic medicine,  Harry says that the experience created a ‘further divide’ between him and William.

The Prince conceded that relationship with the brothers ‘couldn’t be worse’ if they went through the psychedelic experience together.

‘I suddenly realised – wow! – it’s not about the crying. She [Diana] wants me to be happy.

‘So this weight off my chest was not the need to cry, it was the acceptance and realisation that she has gone, but that she wants me to be happy and that she’s very much present in my life.

‘And now, as two brothers, if one of you goes through that experience and the other one doesn’t, it naturally creates a further divide between you. Which is really sad,’ said Harry.

His memoir, which critics have slammed as a means to play the victim, was a bid to save the monarchy ‘from themselves’, said Harry. 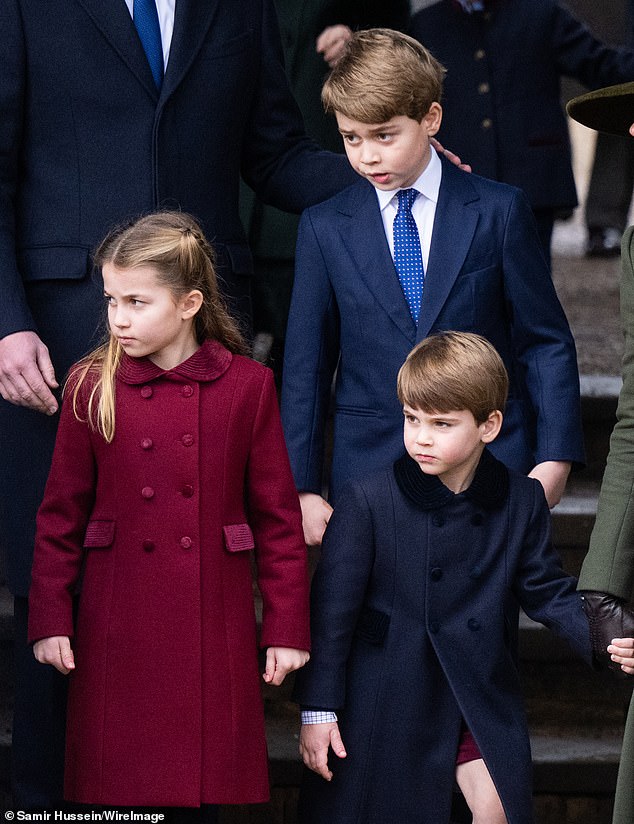 William’s first-born Prince George of Wales is second in line to the throne, with his younger siblings Princess Charlotte of Wales thirds, and Prince Louis of Wales fourth

‘How dare you, as an individual, talk about it, because that makes us all feel really uncomfortable? So right, you may not like me in the moment, but maybe you’ll thank me in five or 10 years time,’ he said.

The Prince said that he did not intend to destroy the monarchy, but wanted to save them from themselves, and that it was his ‘life’s mission’ to right the wrongs that drove him out.

‘And I know that I will get crucified by numerous people for saying that,’ he said.

He added: ‘It took my mum, it took Caroline Flack, who was my girlfriend, and it nearly took my wife.

‘And if that isn’t a good enough reason to use the pain and turn it into purpose, I don’t know what it is.’

Harry also suggested that reform was needed in the Royal family.

‘If only 10 per cent of the scrutiny that was put on me and M was put on this institution, we wouldn’t be in this mess right now,’ he said in a condemning remark.

‘It’s so dirty. It’s so dark. And it will continue and it will carry on and I look forward to the day when we are no longer part of it, but I worry about who’s next,’ he added.

In the interview with the Telegraph, Harry said that he got older, he dealt with his ‘traumatic’ experiences by going ‘slightly off the rails’, by drinking and using drugs, before confronting ‘the very thing that [he] had been running from, or scared of, for all those years.’

‘What I’ve realised is that you don’t make any friends, especially within your family, because everyone has learned to accept that trauma [as] part of life,’ he said.

‘Lots of people go through lots of s–t… when it comes to me and William, the fascinating part is that we both experienced a similar traumatic experience,’ he added.