No hard feelings! Prince William and Kate Middleton are the first to wish Meghan Markle happy birthday as she celebrates her 40th

The Duke and Duchess of Cambridge shared a photo of their sister-in-law in Australia in 2018 with the caption: ‘Wishing a happy 40th birthday to the Duchess of Sussex!’

The photo, taken during the Duke and Duchess of Sussex’s royal tour, shows Meghan smiling on Sydney’s Bondi Beach, wearing a flowing striped maxi dress and a faux lei necklace. She was pregnant with son Archie at the time.

The photo has been interpreted by royal fans as a signal of the Cambridges’ desire to repair their relationship with the Sussexes.

Prince William and Prince Harry, who were once inseparable, have grown apart in the 18 months since Harry and Meghan’s decision to quit the royal family and move to the US.

The Duke and Duchess of Sussex’s public criticism of the Royal Family in a string of recent high-profile TV and podcast interviews has put the relationship under further strain. 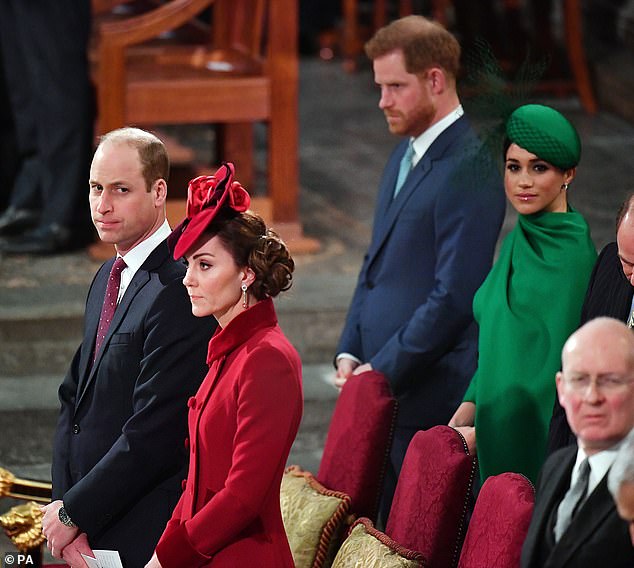 The photo has been interpreted by royal fans as a signal of the Cambridges’ desire to repair their relationship with the Sussexes. Pictured, William, Kate, Harry and Meghan in March 2020

Prince William and Prince Harry were last seen together last month at the unveiling of the Princess Diana memorial statue in the gardens of Kensington Palace. The intimate ceremony marked what would have been Diana’s 60th birthday.

Before that the brothers had last come face-to-face at the funeral of their grandfather Prince Philip, which took place just weeks after Harry and Meghan’s explosive Oprah Winfrey interview.

There had been speculation that Meghan, who welcomed daughter Lilibet Diana in June, was planning to celebrate her milestone birthday with a lavish party for 65 guests.

However yesterday Page Six dismissed the plan and suggested Prince Harry will instead whisk his wife off on an ‘intimate getaway’.

Royal experts have also speculated that the Sussexes may choose to release an eagerly-anticipated family photo to mark the special occasion. Fans are still waiting to catch a glimpse of Lilibet.