EXPRESS INFORMER > News & Politics > Prince William and Kate are seen climbing into a helicopter alongside George, Charlotte and Louis

Prince William, Kate Middleton and their three children – and dog – have been spotted climbing aboard a private helicopter as they prepare to go on their summer holiday.

The Duke and Duchess of Cambridge, both 40, and Prince George, eight, Princess Charlotte, seven, Prince Louis, four, and their black cocker spaniel Orla were seen leaving their Kensington residence on Monday evening.

The youngsters last week broke up from school ahead of a break filled with royal engagements and a rumoured Caribbean holiday.

The family were laden with bags as they walked through a private field adjacent to the Nepalese Embassy near Kensington Palace in London where a black chopper waited.

It’s thought the five royals are heading off on a summer trip.

The trip comes six months after the Queen urged Prince William to stop flying helicopters with his family because she is ‘terrified’ that disaster could strike.

Prince William, Kate Middleton and their three children – and dog – have been spotted climbing aboard a private helicopter as they prepare to go on their summer holiday 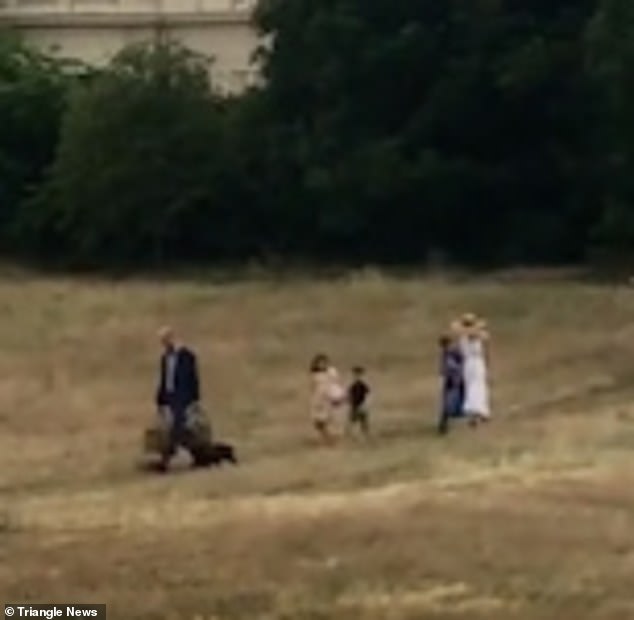 In a video captured by a royal fan, the Duke of Cambridge can be seen walking in front of his family laden with bags, while Princess Charlotte and Prince Louis held hands as they walked together. The Duchess can be seen alongside Prince George at the back of the group

Kate looked resplendent in a white sundress and glamorous sunhat as she helped to shepherd her and Wills’ brood into the waiting chopper.

George followed close behind his mum, also appearing to carry a bag.

Charlotte helped little Louis, – the only member of the family not carrying a holdall – across the grassy path to the chopper, while smartly dressed Wills headed up the Cambridge clan.

The second heir to the throne was laden with two heavy-looking bags. 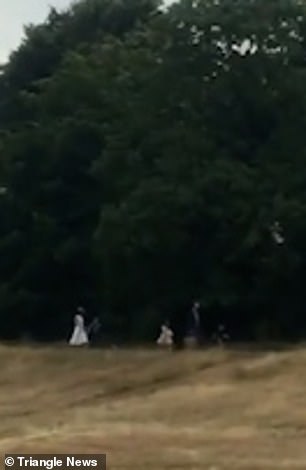 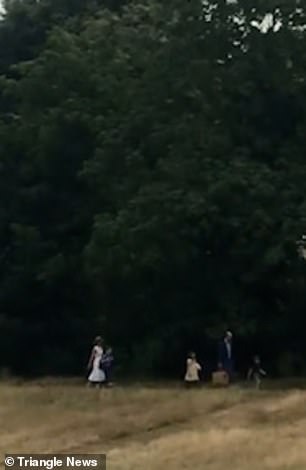 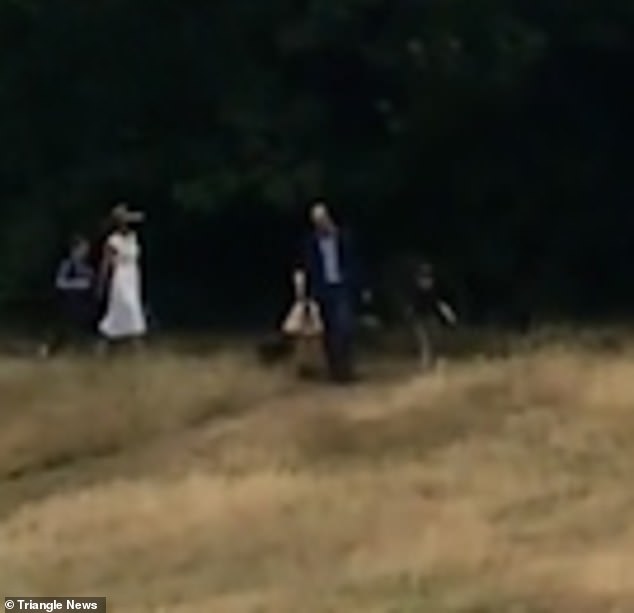 It’s rumoured the family have been eyeing up a summer getaway on the private Caribbean island of Mustique near to St Vincent and the Grenadines, having not visited since 2019.

However, it didn’t look like the royals were carrying enough luggage for a long trip so may be making a stop over first.

An onlooker said: ‘It was very pleasing to see, the whole family were so smartly dressed and looked so nice carrying their luggage.

‘It was quite sweet, they even had the dog with them. They were all carrying bags apart from Prince Louis.

‘It was a really, really hot day too – they looked like they were going to have a picnic or something.

‘They were definitely leaving London, at least that’s what it looked like.’ 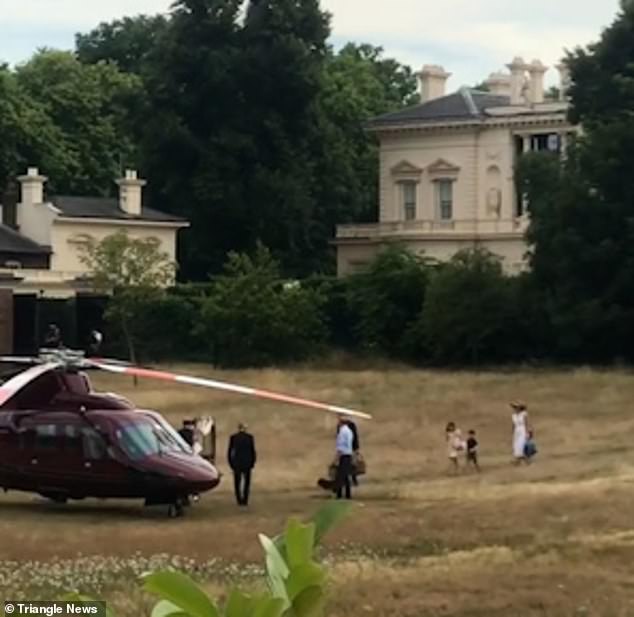 Prince William arrived at the helicopter ahead of his family, where he was greeted by waiting staff 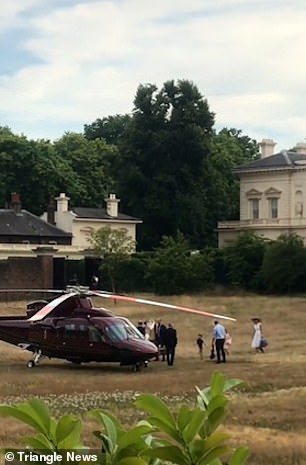 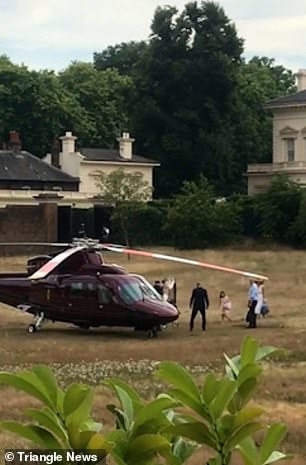 The outing comes after reports the Queen had ‘several conversations’ with William, asking him to ‘stop flying himself, particularly in bad weather’ amid fears an accident could threaten the line of succession.

Unofficial rules usually prevent senior royals from flying together but the regulations have been relaxed since William’s children were born, allowing for the young family to spend more time together.

The family have flown together, often with a pilot and crew but sometimes with William at the controls, since they asked for permission to do so after the birth of Prince George in 2013.

It follows a busier than normal couple of months for Wills and Kate, plus George.

He was at the couple’s side during much of The Queen’s Platinum Jubilee celebrations last month.

The young prince – who turns nine next Friday – also attended Wimbledon for the first time on Sunday for the Men’s final between Novak Djokovic and Nick Kyrgios.

It comes as Prince William and Kate prepare to move their family into a four-bedroomed home on the Windsor estate this summer. 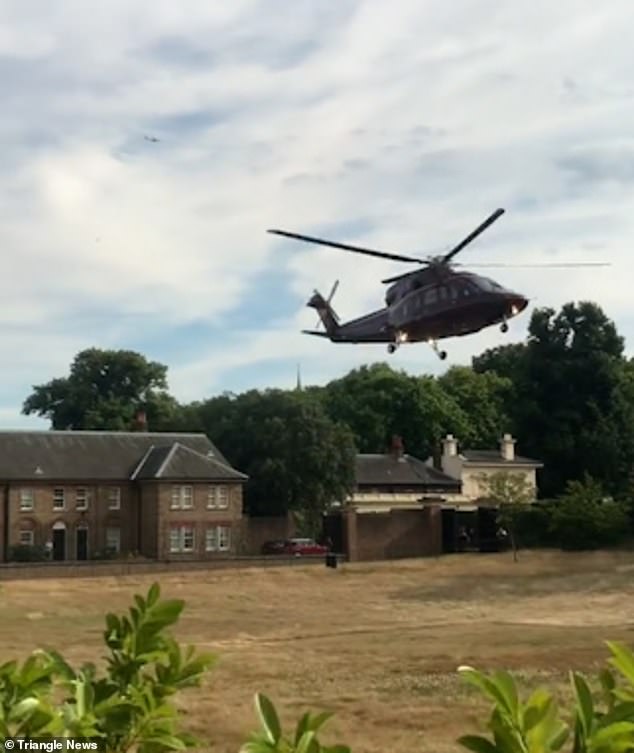 The Duke and Duchess, are reportedly set to uproot their family from Kensington, west London, to Adelaide Cottage in Berkshire in order to be closer to the Queen.

Re-erected in 1831, the Cambridge’s new Grade II-listed retreat is just a short walk from St George’s Chapel and Windsor Castle, and sits proudly on the 655-acre royal estate in Berkshire.

Ingrid Seward, editor-in-chief of Majesty Magazine, said: ‘The Queen needs more people like William around her. She is very often on her own apart from staff and so will be delighted William, Kate and her three great-grandchildren will be ten minutes away. The family were very restricted in what they could do during the week at Kensington Palace.’

Sources close to the family suggest the Cambridges were keen to be closer to the Queen, 96, who has suffered episodic mobility issues in recent months and also secure a good school for their three children.

George, Charlotte, and Louis, will be pulled out of their current prep school in Battersea and are all expected to start school locally when the new academic term begins in September.